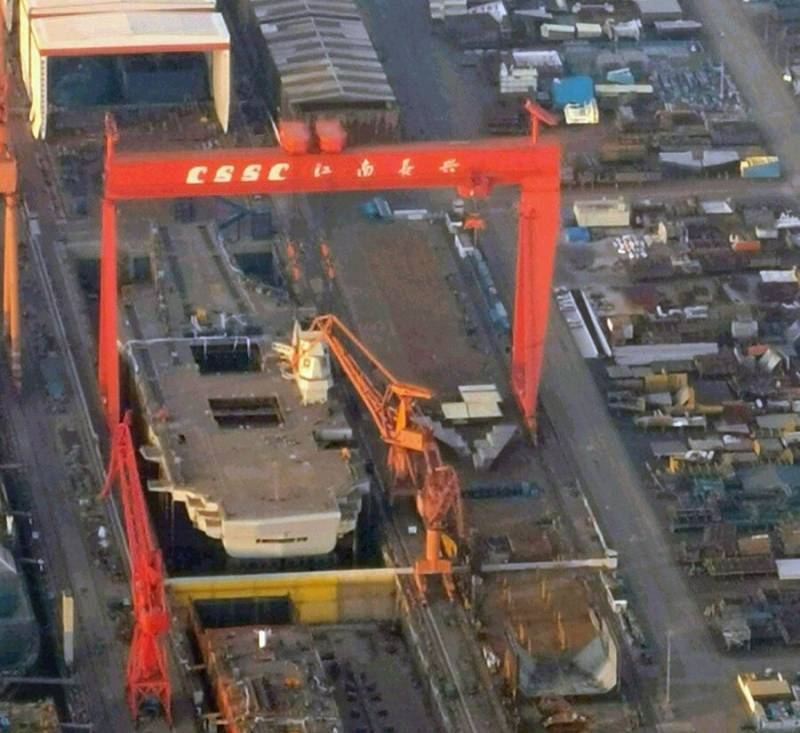 The photos presented this summer demonstrate the obvious progress of the PRC in creating its most powerful aircraft carrier, designated Type 003. In particular, in one of the photographs you can see the already installed superstructure of the ship, which indicates a high degree of readiness.

There is confusion in the names. The fact is that earlier some observers called the second aircraft carrier of the PRC, now well known as "Shandong", as Type 001A. And the third (which will be discussed) was conventionally called Type 002. However, after Shandong received the designation "Project 002", the third ship became firmly associated with the current name. 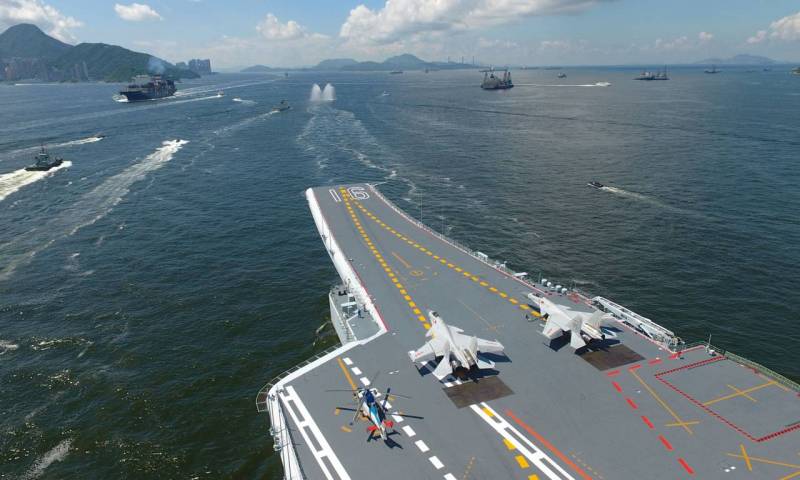 No matter how the ship is called, before us is the largest, most powerful and expensive aircraft carrier (and in general a warship) in stories PRC. Everything that came before this, to one degree or another, represented the development of the Soviet project 1143. The only Russian aircraft carrier, "Admiral Kuznetsov", we recall, belongs to the project 1143.5. "Varyag", which after its sale by Ukraine to China became "Liaoning", belongs to the project 1143.6.

"Admiral Kuznetsov", "Liaoning" and "Shandong" have differences. The "Chinese", for example, do not carry strike weapons (after modernization, as far as can be judged, "Kuznetsov" will also be deprived of it). But there is a main feature that unites them. This is the presence of a springboard on the take-off deck and the absence of a launch catapult, as in American ships of this class. On the one hand, this makes the project cheaper, on the other, it sharply limits its capabilities: both in terms of the combat load of carrier-based fighter-bombers and in the types of aircraft that can be used.

If we deviate a little from the topic, it is worth saying that the 1143 project was also developed in this direction. The first "full-fledged" Soviet aircraft carrier was supposed to be "Ulyanovsk" of project 1143.7: it was decided to equip it with two steam catapults "Mayak", but due to the difficult economic situation after the collapse of the USSR, the construction of the ship was stopped.

If the first Chinese aircraft carrier - "Liaoning" - was literally a Soviet-built ship, and the second became its development with a "Chinese face", then Type 003 can be considered the first aircraft carrier entirely developed and built by China.

The construction of the ship, according to various sources, began either in 2015, or in 2016, or even in 2017. First of all, the size of the aircraft carrier attracts. If "Shandong" and "Liaoning" have a displacement (full) of about 70 tons, then for the Type 000 this figure will be up to 003 tons. The length of the new aircraft carrier is approximately 85-000 meters, which is roughly comparable to that of the American Nimitz-class aircraft carrier (300 meters). 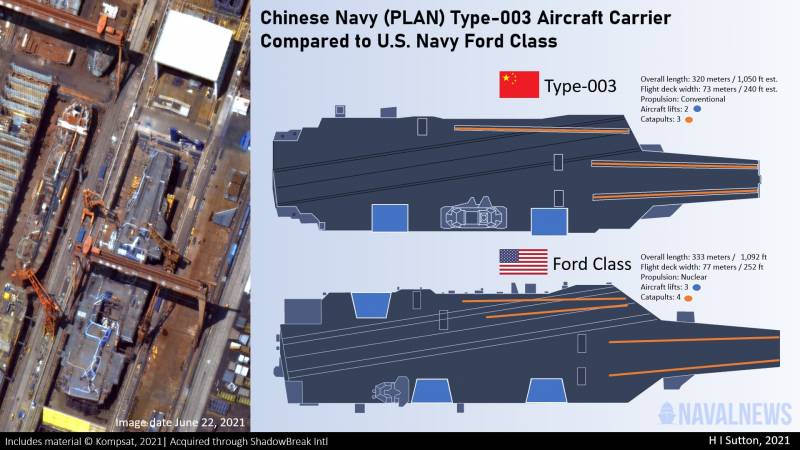 The main difference from the American aircraft carriers was the choice of the power plant. The Chinese have probably given up on nuclear reactors, but the exact type of installation remains unknown even now.

The type of catapult that the Chinese decided to install is also difficult to judge unambiguously. Electromagnetic catapults, such as those on the newest American aircraft carrier, Gerald R. Ford, generally perform better than steam catapults, such as on ships such as the Nimitz. This, in particular, concerns the smoothness of aircraft launches. But there is also a downside - price and technical complexity. Americans, who had high hopes for the Electromagnetic Aircraft Launch System (EMALS), have already faced a number of problems.

"I will issue a decree that steam catapults are used in the construction of new aircraft carriers."

However, the point of no return has already been passed. As Western media reported this year, the EMALS and the Advanced Arresting Gear (AAG) installed on the Gerald Ford ensured 8000 successful aircraft launches and landings. Presumably, neither the United States nor the Chinese will abandon technology. However, the Celestial Empire has yet to overcome the difficulties that the Americans have already overcome.

The beginning of a long journey

As already mentioned, the catapult will allow launching more types of aircraft and with a greater load. Among them will be the Xi'an KJ-600 early warning aircraft - a "copy" of the American Hawkeye flying radar. 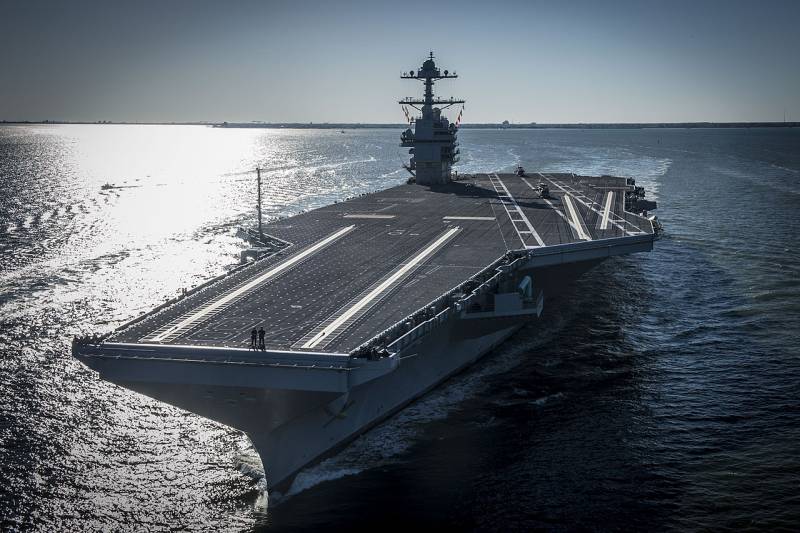 So far, China does not have a Boeing F / A-18E / F Super Hornet-class multi-role carrier-based fighter. It is pertinent to recall that last year the F / A-18 Block III Super Hornet, the latest and most "advanced" version of the fighter, took to the skies for the first time. The production aircraft will receive, in particular, a new IRST sensor and a large touchscreen display for the cockpit. It has perfect avionics and can use almost the entire spectrum aviation weapons that are in the arsenal of the US Navy.

In turn, the only carrier-based fighter of the PRC Navy, the Shenyang J-15, is a Chinese version of the Su-33. The basic version of these machines is the Soviet Su-27, which was not created as a carrier-based aircraft and is not very suitable for this role, if only because of its size. At one time, The Asia Times reported that in China the plane is called a "jumping fish" for its inability to work effectively from the deck of aircraft-carrying ships.

The main difference between the J-15 and the Su-33 is its enhanced strike capabilities. It is known that the machine can use, among other things, air-to-surface missiles: YJ-91, YJ-83K, KD-88. However, this is not enough for a full-fledged "deck". According to Western experts, the WS-15 engines created for the J-10 are notable for their low reliability, moreover, they are not powerful enough for such a heavy machine. In addition, the Americans counted at least four J-15 crashes with a total small number of aircraft produced. 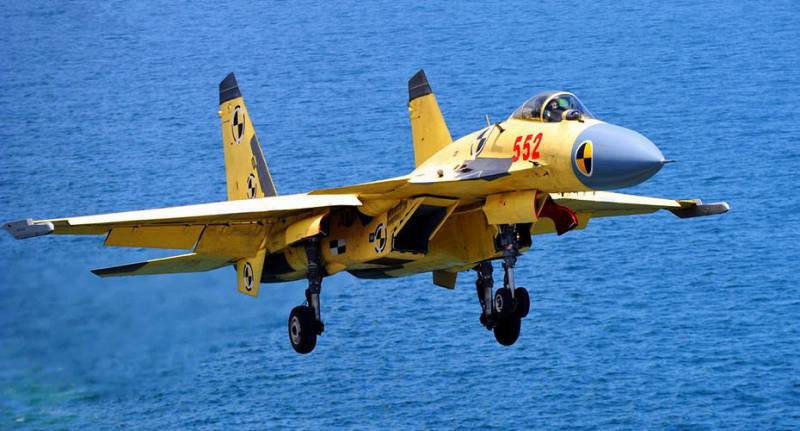 It is pertinent to say that in the future, the latest F-18C of the fifth generation will become the basis of the US Navy's carrier-based aviation along with the F / A-35E / F. The fact that the aircraft belongs to the fifth generation "conditionally" does not negate the fact of its stealth, which gives an advantage over Chinese carrier-based fighters, at least out of line of sight. According to rumors, as well as a photo from the Web, the PRC is creating its own inconspicuous shipborne fighter FC-31, but so far the data on this aircraft are contradictory and often speculative. 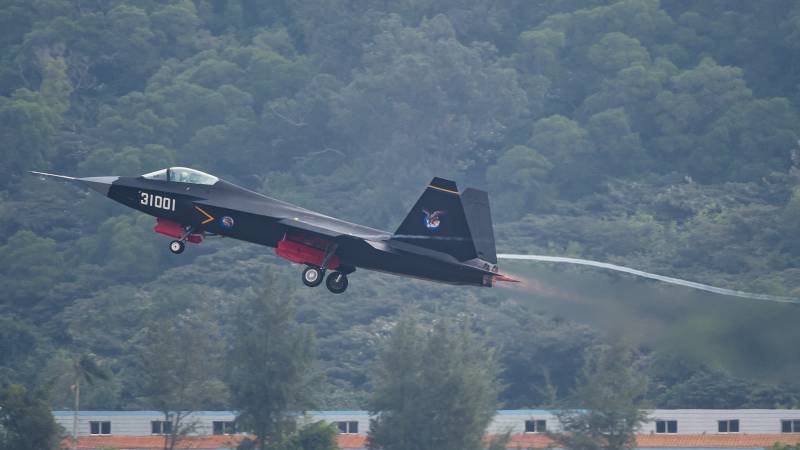 Undoubtedly, the new aircraft carrier will give China new leverage in the Asia-Pacific region and will be a huge step forward for the entire PRC. On the other hand, there is no real superiority over the US Navy.