NASA: "As we return to the moon" 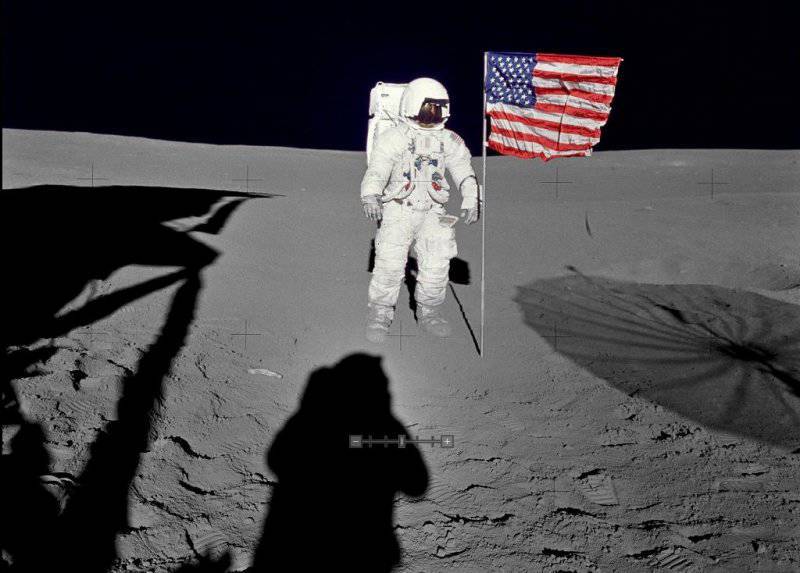 "Until the end of the next decade, NASA astronauts will once again explore the surface of the moon," - says the official statement of the US space agency.
This time they are going there to stay for a long time. The construction of the lunar base, the development of the satellite and the provision of the subsequent journey to Mars and beyond is supposed. 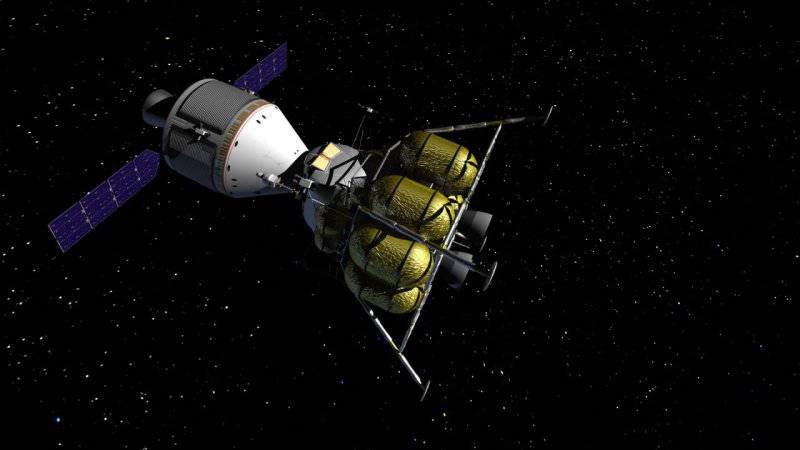 The device can be manned or cargo automatic (depicted with a landing lunar module).
Concept designer John Frassanito and his team. It is assumed that flights to the moon will begin in the near future, using a new rocket carrier. The developers will take the best from Saturn V, Appolo, Space Shuttle and 21-century technology. It is supposed to create a system that is fairly cheap, reliable, and universal. The central element of this system is a new spacecraft designed to deliver four astronauts to the Moon or Mars, with the possibility of increasing to six crew members on the ISS or delivering cargo to the ISS. Initially, it is intended to use the modular principle in the launch vehicle and the ship. The device (capsule) will be in the form of an Apollo capsule, but it will be three times larger in size.

The new ship can be reused up to 10 times. After landing on land (landing is provided as a backup option), NASA easily recovers minor damage (replacement of the heat shield, parachutes, UPS, etc.) to start it again. Together with the new lunar landing module, the system can send twice as many astronauts to the lunar surface, and they can stay there longer (mission duration from 4 to 7 days). An important difference between the new ship and Appolo, which was limited to landings only along the equator of the moon, is that the ship carries enough fuel to land at any place on the lunar surface. 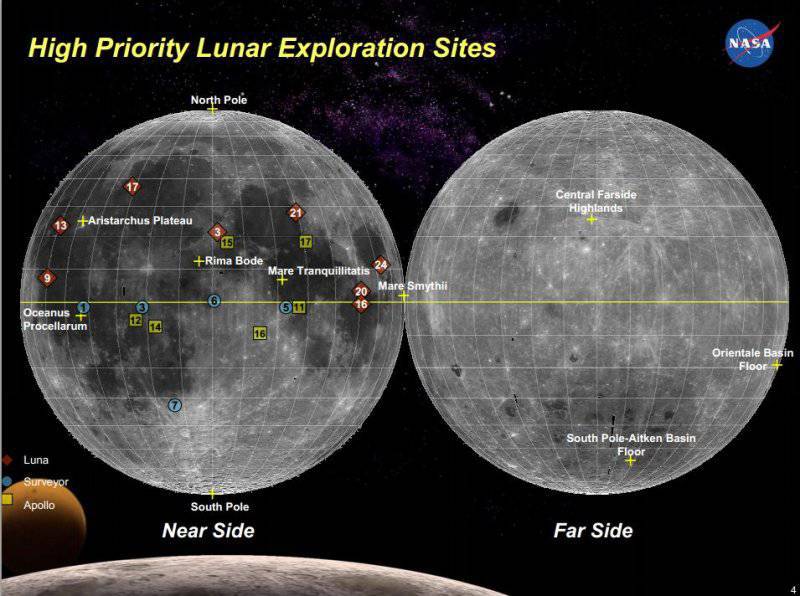 The most relevant places for future landings

A safe and reliable launch of the system into orbit will be provided by the powerful and reliable Ares I launch vehicle, which in turn is also modular and can use up to five solid-fuel boosters. 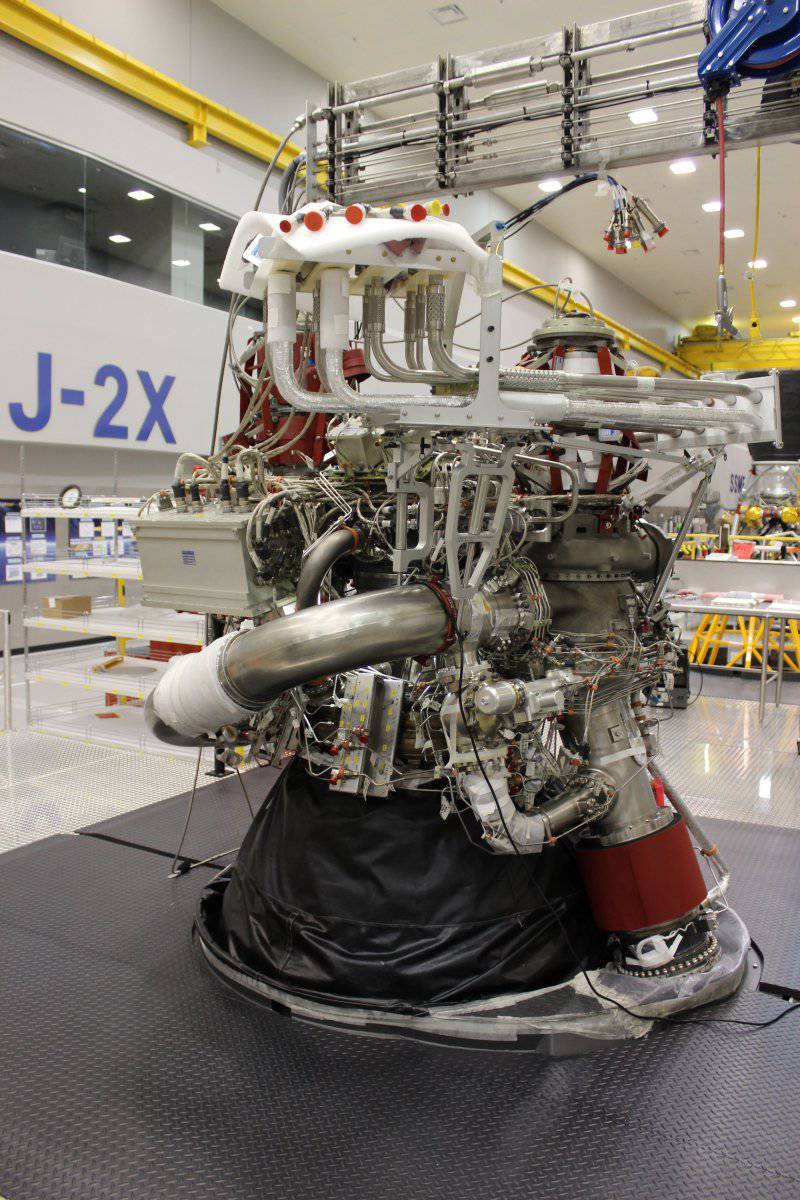 It will be used to set the second space velocity of the ship. Ares I can lift more than 25 000 kg of payload into low earth orbit. 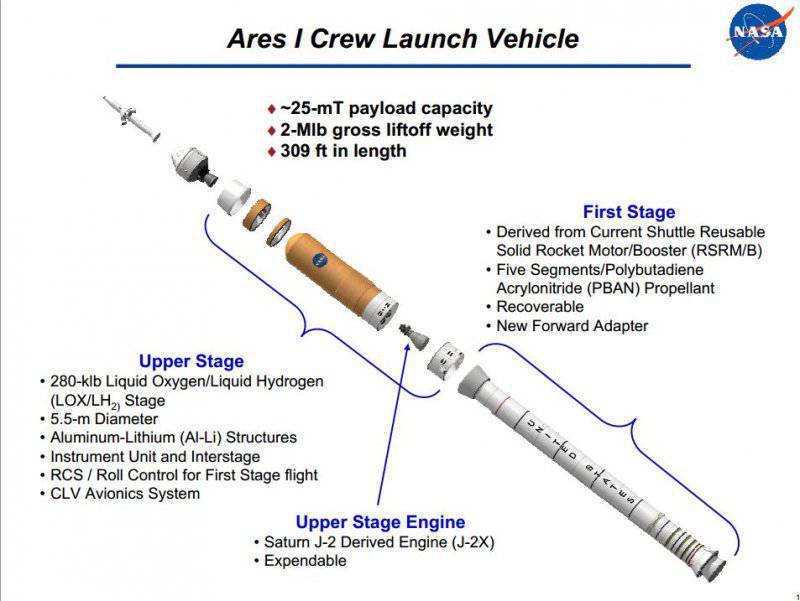 Comparative sizes of PHs with past systems: 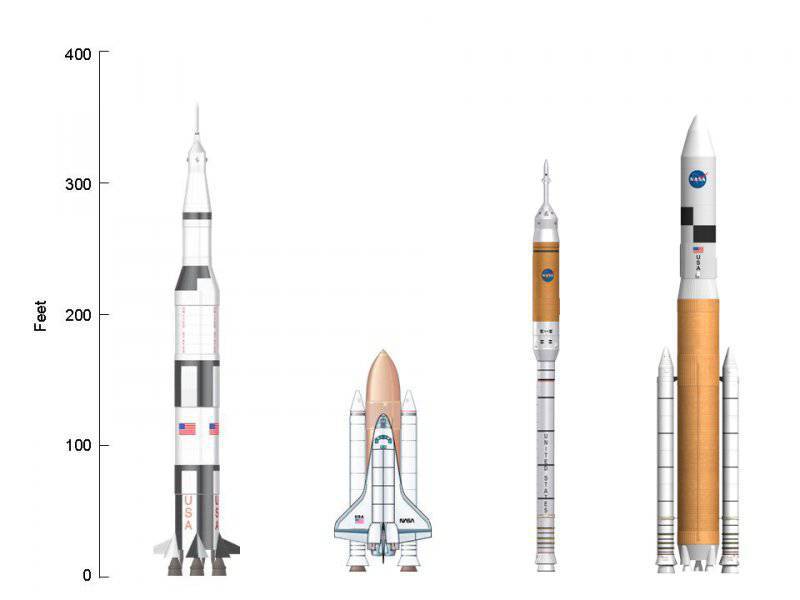 At the same time, Ares V will be produced - a heavy booster vehicle that uses (at the first stage) five RS-68 liquid propellant rocket engines (liquid oxygen / liquid hydrogen). The first stage is based on an increased (along the length) external fuel tank of the Space Shuttle system and two five-segment solid fuel boosters. 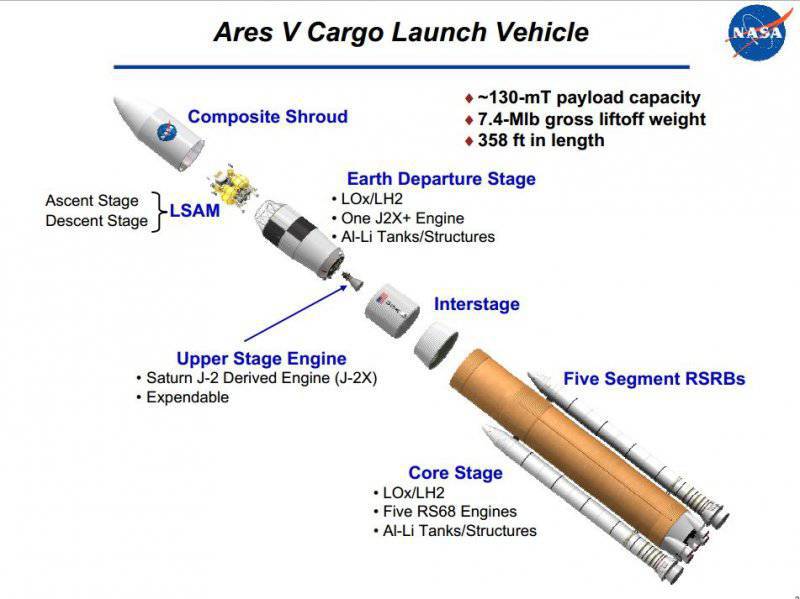 The upper stage will use the same J-2X engine as the Ares I. Ares V can lift more than 130 000 kg to low earth orbit and has a height of about 110 meters. This universal system will be used to transport goods and components into orbit, followed by delivery to the Moon, and then to Mars. It can be used both as a cargo launch vehicle and for launching crew delivery. The most important parameter to which attention is drawn is that the launch of the system should be safer in 10 times than in previous PH and Chatelet. Especially in the area of ​​launch-near-Earth orbit.

Plans.
It is assumed that within five years, the new ship will begin to ship the crew and cargo to the International Space Station. The number of starts is at least six per year.
At this time, automatic missions will lay the foundation for exploring the moon.
In 2018, people will return to the moon.

This is how the mission will unfold:

- the crew at the same time starts on a separate PH with a habitable capsule.
the first step of both PH descends by parachute and is subject to reuse 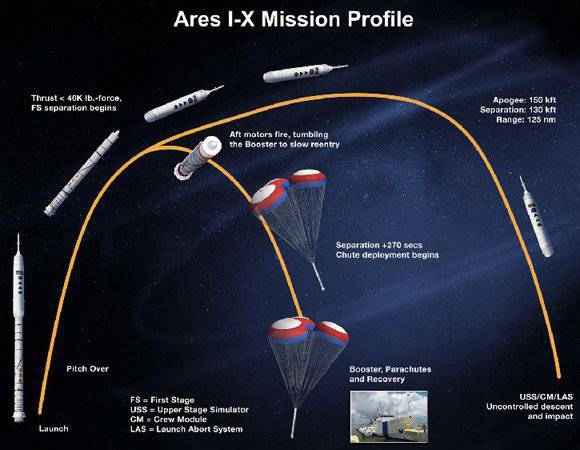 - docking takes place in orbit, and in three days the spacecraft reaches the moon

- four astronauts get into the boarding module, leaving the capsule in orbit.
after landing, the surface is examined for seven days 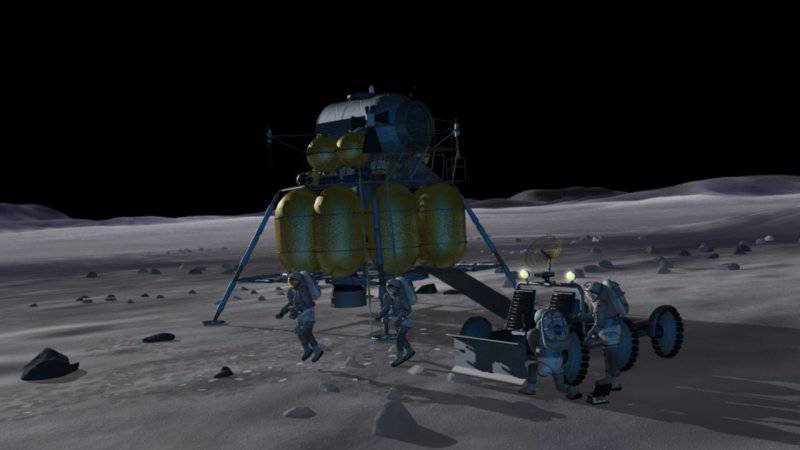 - then the device starts from the Moon to the capsule in orbit in the part of the descent vehicle, fits in with it, moves into it and returns to the Earth. After de-orbit and before the start of aerodynamic braking, the service module is reset, exposing the heat shield to external influence. Parachutes open, the shield of heat protection is shot off, and after landing the capsule lands on land. 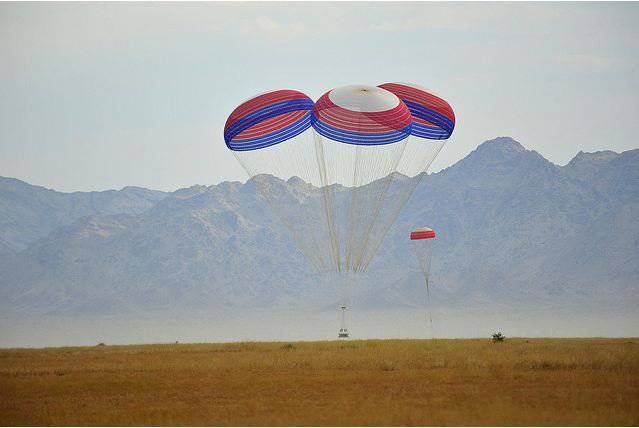 It is assumed at least two lunar missions per year, which will quickly build a permanent outpost on the moon. Crews will stay longer at the lunar station and learn how to use the resources of the moon, while the descent vehicles will deliver the necessary cargo. In the end, the new system involves the rotation of crews on the lunar base every six months.
The United States is already looking with hope to the lunar South Pole as a candidate for the first station, since it is believed that there is the presence of hydrogen in the form of water ice, as well as an abundance of sunlight that can be used to generate electricity.

1) 16 July 2007, NASA officially announced a contract with Pratt & Whitney Rocketdyne (PWR) in the amount of 1,2 billion dollar contract "for the design, development, testing and evaluation of the J-2X engine", as well as for the construction of a new engine test bench J- 2X on Stennis Space Center 23 August 2007 of the year
2) Starting from 2011, the finished J-2X engine undergoes hot fire tests. 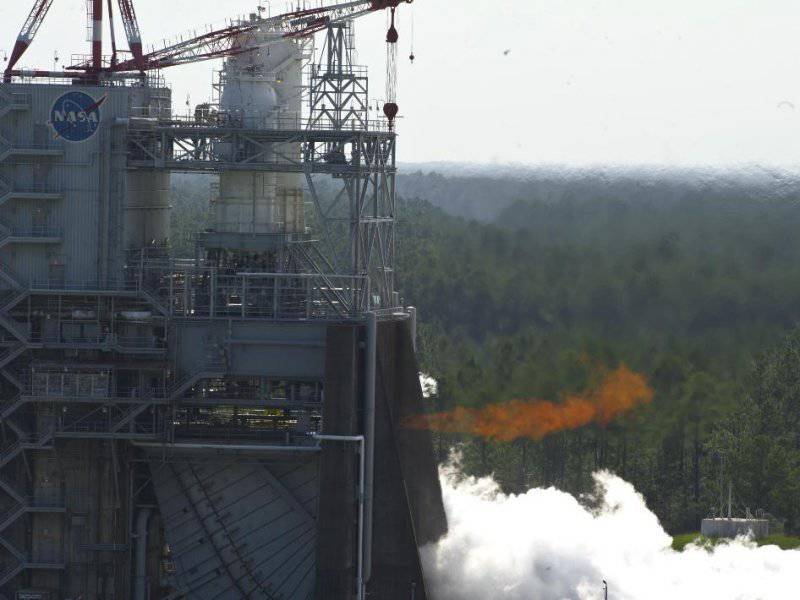 3) The first unmanned flight with LRE J-2X is scheduled for 2014 year.

4) On 28 August, 2007 NASA commissioned the production of the top (second) stage Ares I Boeing

5) On 10 in March 2009, NASA successfully completed test launches for Ares I RTDTs at ATK Launch near Cape, Utah.
Proving that gas leakage does not occur (there were problems on preliminary launches in 2008) 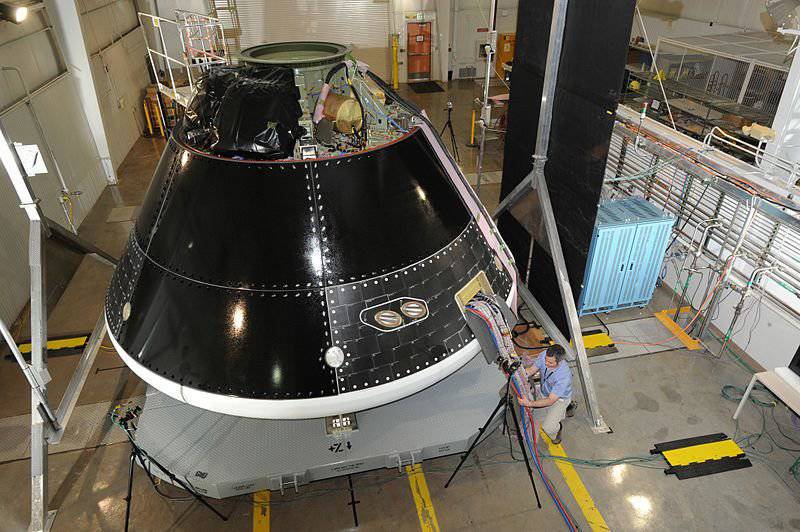 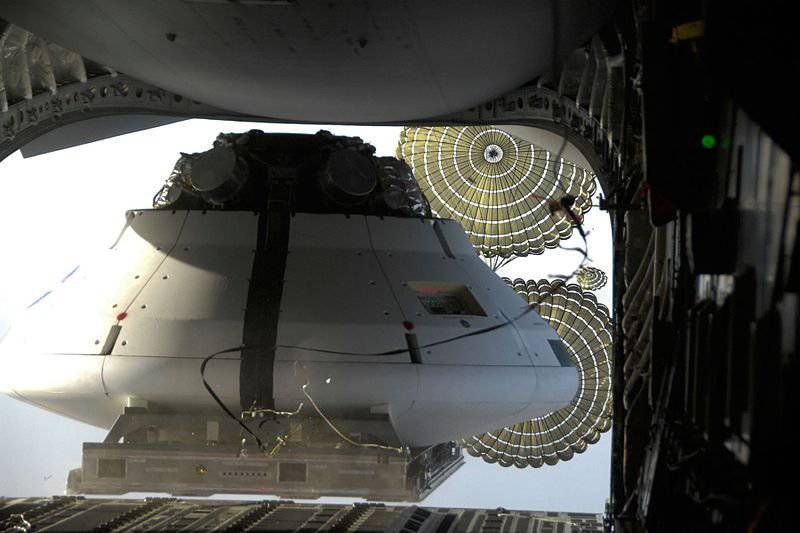 These NASA plans can give a huge head start to the United States to be the first to reach Mars. They will already have a heavy-class RN, proven docking techniques in orbit, with the goal of creating a full-fledged spacecraft and a universal crew capsule. A lunar outpost (permanent base), just three days from Earth, will provide NASA with the necessary skills and technology, and will also make it possible to reach Mars with less cost.

The manned flight to MARS is supposed to be carried out according to the same principle as the lunar expeditions: 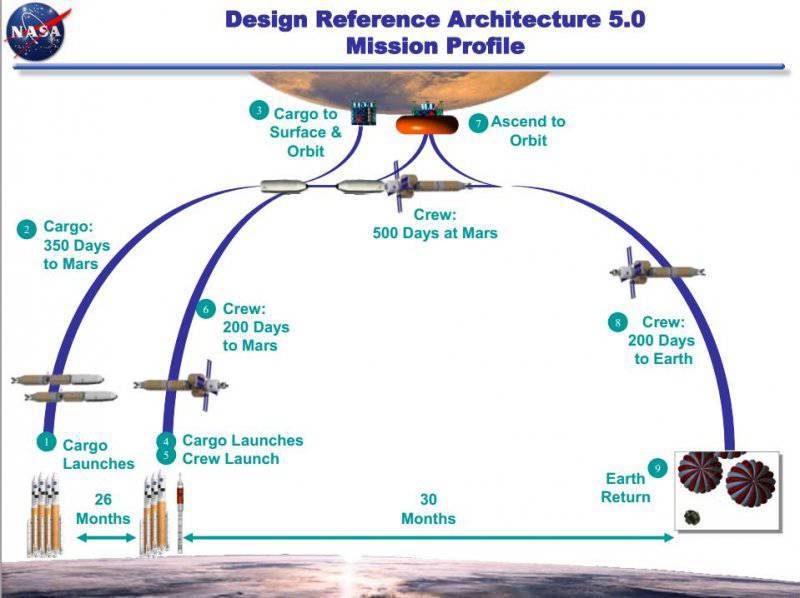 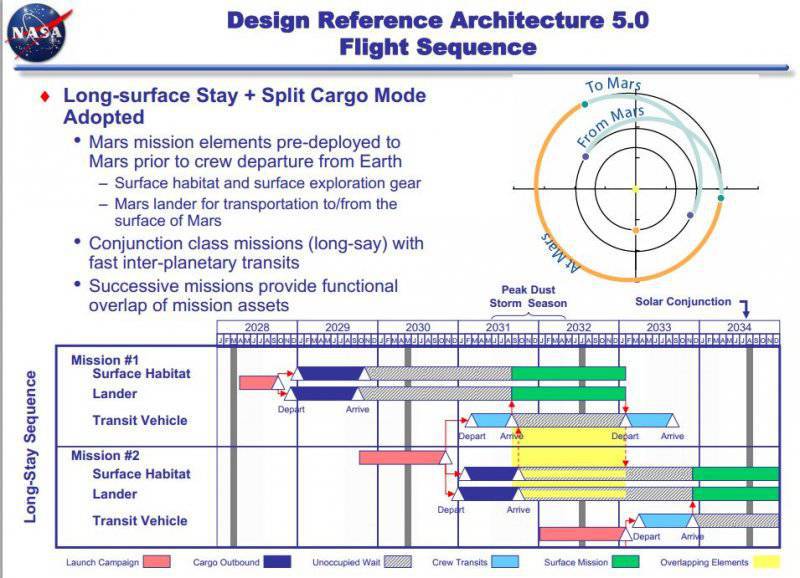 Ctrl Enter
Noticed oshЫbku Highlight text and press. Ctrl + Enter
We are
Military base on the moon (cosmic prospects of pneumatic electric weapons)To Mars through the Moon
25 comments
Information
Dear reader, to leave comments on the publication, you must to register.