"Visor" for the tank. New means of protection T-72B3 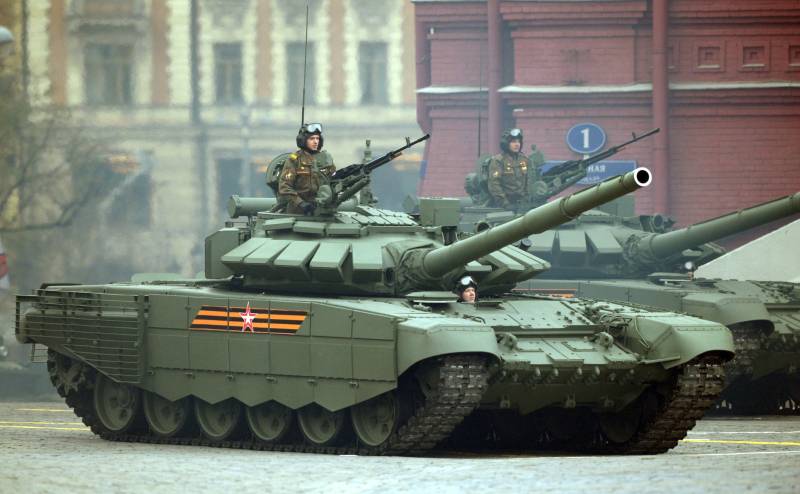 Tanks T-72B3 Taman division on Red Square, May 9, 2021. You can consider two sets of dynamic protection on the forehead and the roof of the tower

Recently it became known that a new additional means of protection has been developed for Russian main battle tanks. The unit of a characteristic shape is intended to increase the stability of the upper projection of the armored vehicle - which is necessary in light of the main trends in the development of anti-tank weapons. So far, only individual combat vehicles have received such products, but their widespread introduction is planned in the future.

Visor on the landfill

On June 17, the press service of the Ministry of Defense reported that regular tank firing took place at the Kadamovsky training ground (Rostov region). This time, the commanders of the combined arms formations of the Southern Military District demonstrated their skills. The event was personally led by the commander of the Southern Military District, Army General Alexander Dvornikov.

The skills of general tankers were tested using standard combat vehicles of the T-72B3 type of the latest modernization. And it is with this technique that the most interesting is connected news... Previously unknown structures were installed on the turrets of the tanks, outwardly resembling a light roof or awning. At the same time, these details were not mentioned or explained in the message of the Ministry of Defense.

On June 18, Rossiyskaya Gazeta clarified the situation. Citing a source in the Ministry of Defense, she wrote that the new product is a means of additional protection for the tank. The official name of such a device has not been disclosed, but its nickname given by the military is given - "the sun visor". 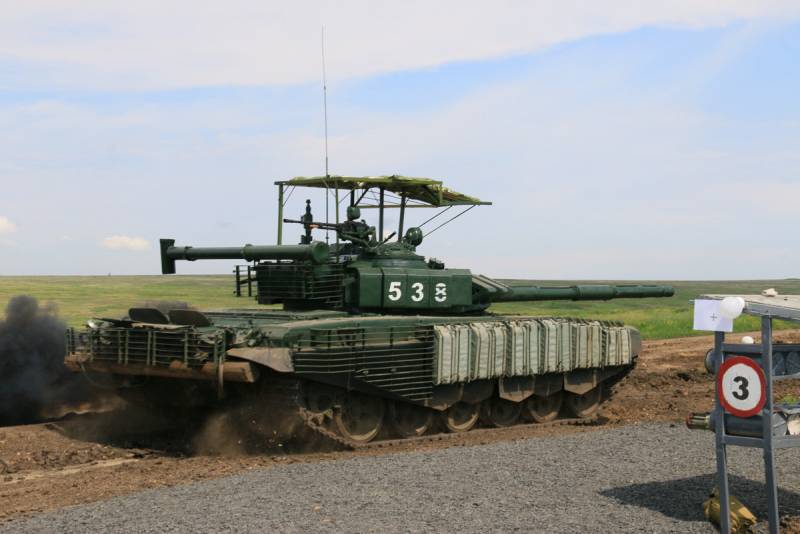 Tank T-72B3 with installed "sun canopy"
This "visor" is necessary to increase the level of protection of the tank against threats in the upper hemisphere. Some modern anti-tank guided missiles and loitering ammunition seek to hit an armored object in the least protected projection, i.e. from above. An unusual "visor" should exclude a direct hit of ammunition in the turret and thereby dramatically reduce the likelihood of hitting the tank itself. How exactly it works and on what principles it works - it has not yet been reported.

The photographs from the Kadamovsky test site simultaneously show up to three tanks with original protection. According to "RG", they will not be the last. The Ministry of Defense said that in the near future such devices will begin to equip other T-72s of the Russian army. The details of this upgrade have not yet been specified.

Official photographs from the Ministry of Defense allow us to consider the "visor" in some detail. Outwardly, this product is not very complex - it has a fairly simple design and probably does not include any high-tech components. However, it is possible that there are any original solutions that cannot be noticed during an external examination.

The "sun shade" is made on a metal frame made of a corner. Four racks are attached directly to the carrier tank turret. Two are placed on the roof behind the gun mask; at a short distance from each other. Two more are in the stern and spaced as wide as possible. The racks have a rectangular frame with two tiers. Its front is below the back. There are grilles inside the frame, on which a kind of soft covering is laid. It probably uses Kevlar or some other similar material. 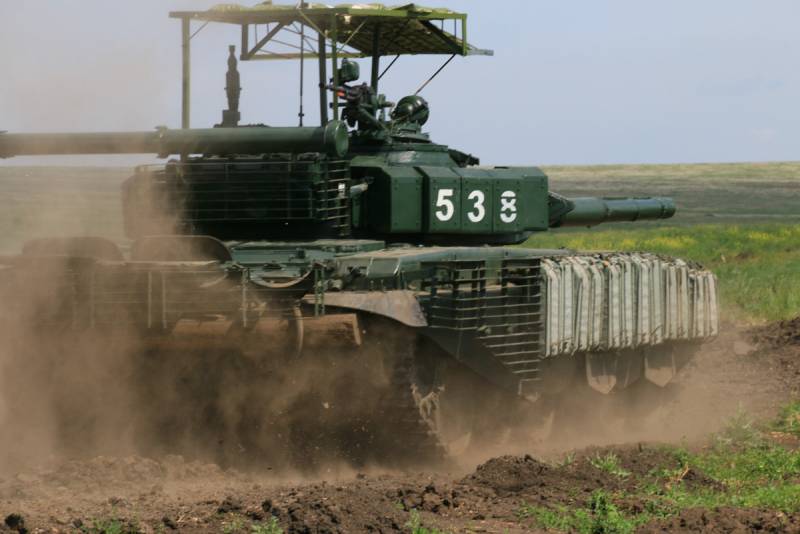 The product is intended for protection against anti-tank weapons. This indicates that the "visor" acts as a screen that causes premature operation of the cumulative warhead. It should also be expected that such a design is able to reduce the negative impact of ammunition with a high-explosive fragmentation warhead.

Another protective function of the product is reflected in its unofficial name. The "visor" is located above the tower and literally protects it from the sun. It reduces the heating of the crew compartment, which does not have an air conditioner, and thereby improves the working conditions of the crew. Also, an additional "roof" is able to protect the crew from rain.

In the latest modernization projects for the T-72 MBT, a number of additional protection means of various kinds were introduced. Due to this, in particular, it was possible to significantly increase the resistance of the side projection to the main threats. At the same time, insufficient attention has been paid to the upper projection. The new project takes this problem into account and offers a convenient solution.

The upper projection of the T-72B3 tank can be divided into three main sections, formed by different units. They differ in their design, and also have different protection characteristics and are subject to various threats. 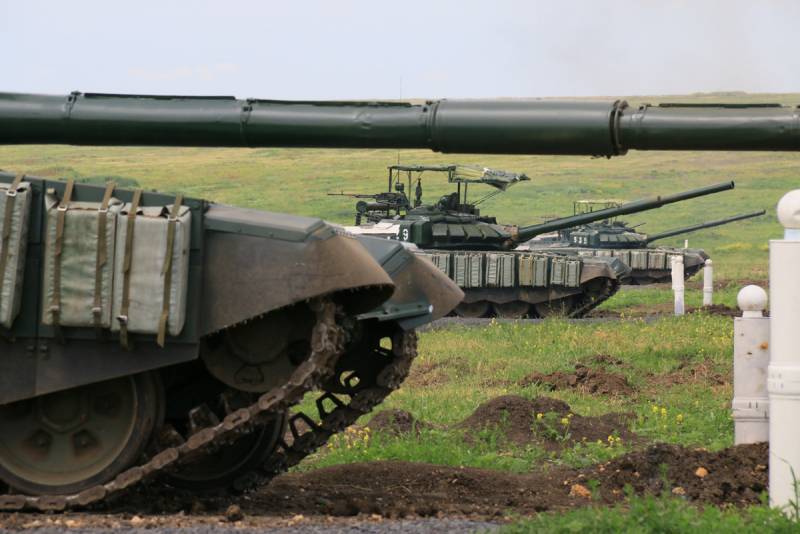 The front of the projection falls on the forehead of the body. It has a combined armor on the basis of steel and non-metallic elements, on top of which the Kontakt-5 dynamic protection units are installed. Such a defense complex is designed for shelling from the front hemisphere, but it is also capable of effectively resisting attacks from above.

The forehead of the tower, as in the case of the hull, has a combined protection. However, the roof is solid and not very thick. The forehead and cheekbones, as well as a limited section of the roof of the tower, are additionally equipped with two types of DZ blocks. At the same time, a significant part of the upper projection of the roof remains without additional protection.

The aft part of the upper projection of the MBT is formed by the roof of the engine compartment. It is also made of armor plates, but most of its area is occupied by a variety of hatches and grilles, which significantly reduce resistance to major threats. At the same time, no additional protection against attacks from above in the stern is provided - although the side projection and the rear sheet are reinforced with lattice screens.

Thus, the "sun shade" covers one of the important, but insufficiently protected areas of the upper projection of the tank. It enhances the overall defense of the tower, i.e. fighting compartment with a gun, shells and crew. This reduces the likelihood of hitting vital elements and disabling the tank. At least a single hit will not be able to fundamentally affect the combat effectiveness, and the T-72B3 will continue to complete the task.

Earlier, the Ministry of Defense or organizations of the defense industry did not report anything about a promising "visor" for tanks. The finished product was publicly demonstrated only a few days ago, and immediately on the MBT of one of the combat units. This may mean that in the recent past such a product passed all the necessary tests and was put into service - in an atmosphere of secrecy. 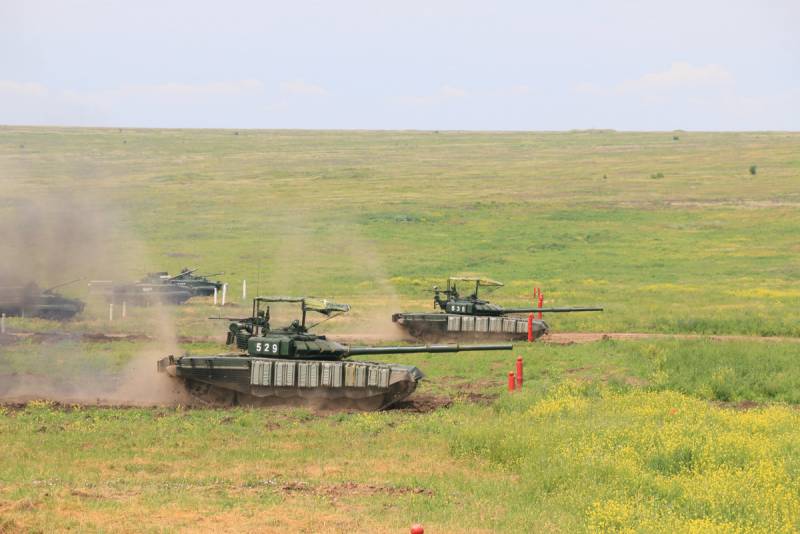 A logical consequence of this are reports of the planned equipping of other tanks of the Russian army with "roofs". Given the sufficient simplicity of such protection, it can be expected that at least most combatant T-72B3s will receive it, and the production processes will not stretch out for many years. This means that the combat qualities of existing tanks will improve in the short term.

Thus, right now we can observe another step in the development and modernization of the old, but not outdated, T-72 tank. Not so long ago, another comprehensive modernization of this machine took place, affecting a number of key components. Now the tank receives a new product that complements the previously installed protective equipment.

It is quite possible that these measures will begin a larger program of modernization of various armored vehicles. Following the T-72B3, other tanks and armored vehicles of other classes can receive "sun visors". Almost all armored combat vehicles of relatively old models that are in service with our army can be considered potential carriers of such equipment. Initially and after the latest upgrades, they may have an insufficient level of protection against attacks from above - and now this problem is getting a decent solution.

Ctrl Enter
Noticed oshЫbku Highlight text and press. Ctrl + Enter
We are
Armored vehicles of Ukraine: results, potential, prospects ...Is the "old" well forgotten to become the "new"? Part-2. At the call of honor and duty
Military Reviewin Yandex News
Military Reviewin Google News
163 comments
Information
Dear reader, to leave comments on the publication, you must sign in.