October 18 2010
0
While France is trying to export Rafale, Sweden is showing the world how a small nation can create its own fighter and even export it.

The prototype of the Gripen fighter took off December 9 1988 of the year (after two years after the flight of the technological demonstrator Rafale - 4 July 1986 of the year). The aircraft entered service with the Swedish Air Force in 1996, that is, five years before the delivery of the naval version of the Rafale. Currently, the Swedish Air Force has more than 170 aircraft of this type (about 204 ordered in total).

The fighter was delivered by the Czech and Hungarian Air Forces (leased by 14 vehicles), South Africa and Thailand are equipped by 26 and 6 fighters, respectively. In addition, these aircraft are delivered to the test school of the British Air Force. The plane participates in competitions in Brazil, India and Switzerland, there are plans to export to Croatia and Denmark.

Sweden, like France, has been developing jet fighters since the 50s of the last century. Draken fighters were exported to Denmark, Finland and Austria, were supplied to the test pilot school in the United States.

Of course, Gripen has a large share of American technology (about a third of the cost of the aircraft). Volvo supplies the Aero RM12 engine, which is based on the US GE F404 TRDDF, and the onboard equipment of the fighter was developed jointly with the British company GEC-Marconi.

But for a country with a population of 9 million people and a GDP equal to 15% of French, this is not bad at all, especially when you consider that Sweden is developing other types of weapons, such as submarines and BMP. 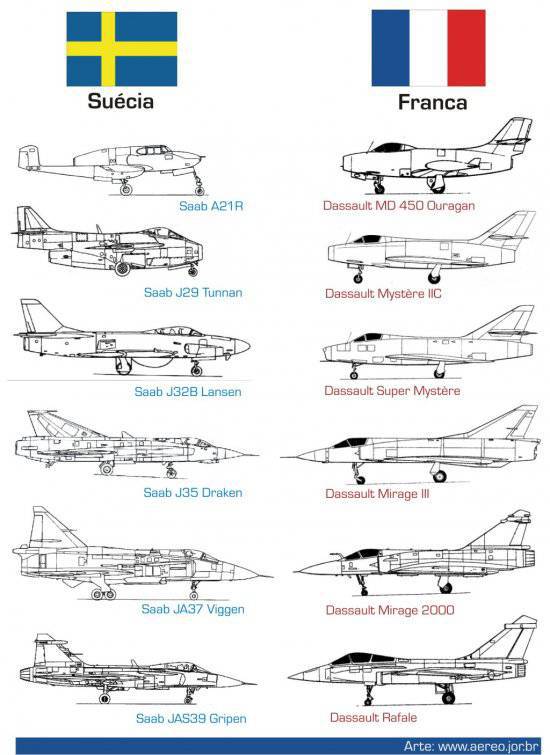