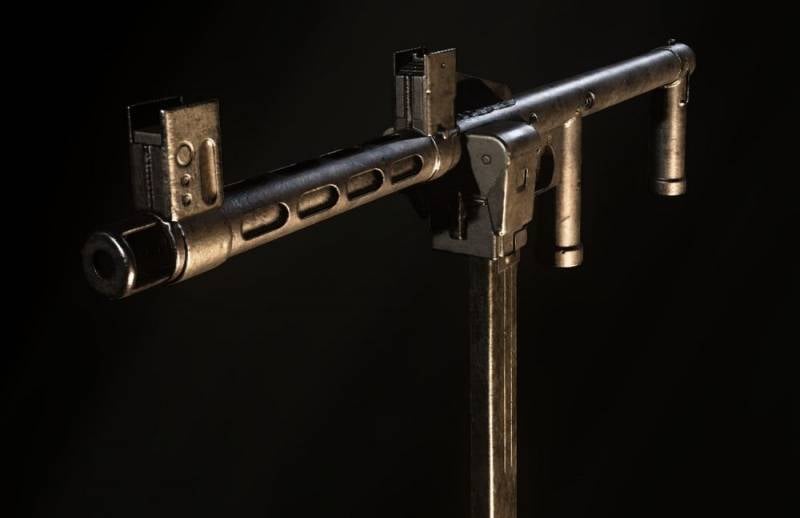 In the second half of World War II, after the defeat at Stalingrad, when many in Germany realized that victory in the war could only be won by a miracle, the country began to develop the most simplified models of small arms. weapons... Erma Maschinenpistole, founded in 1922, was also involved in this work. Fortunately, the company's experience and best practices in this area were enormous. Back in 1931, Erma bought all the rights to submachine guns designed by Heinrich Volmer.

How the idea for a simplified submachine gun was born

At the turn of 1942-1943, German industry was tasked with developing a new submachine gun that would be much simpler than the mass-produced MP 38/40 models. And the question here was not the quality of the available models, which remained very good, but the desire to produce as many weapons as possible, as simple and cheap as possible. Here Germany reoriented itself to the countries with which it fought and which even earlier switched to the following production model: the cheaper and more, the better.

After the defeat at Stalingrad in Germany, the economy was finally transferred to total war, while the country's resources were limited, and the military power of the allies and industry of the USSR, the USA and Great Britain only grew. Under these conditions, Berlin needed more and more simple weapons that could be produced quickly, cheaply and with the involvement of low-skilled labor.

In addition to the very course of the war, which was unsuccessful for the Germans, they saw what kind of weapons the allies were massively producing. The British STEN submachine gun and the American M3 “shooting oil can” did not give the impression of efficient and technologically advanced small arms, but they coped with their task in battle. An even greater influence on the Germans was exerted by Soviet developments in this area.

German soldiers willingly used Soviet captured Shpagin and Sudaev submachine guns. Shpagin's submachine gun, the famous PPSh-41, was put into service in December 1940. The model was distinguished by the presence of simple body parts and a simple technical device. During the war, the production of this model was managed in mass quantities even in small artels and workshops with the involvement of unskilled labor. 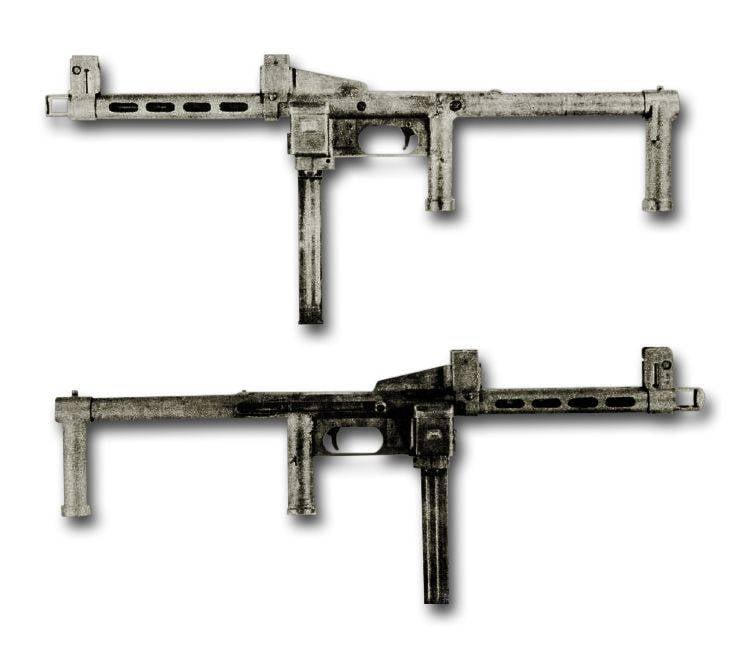 Submachine gun E.M.R. 44, appearance
To assemble the PPSh, it took about 5,6 machine-hours, for the PPS submachine gun that appeared during the war years, which was adopted in 1942, this figure was completely reduced to 2,7 machine-hours. The all-metal submachine gun of Sudaev did not have a wooden butt and was equipped with a simplified reclining shoulder rest. Submachine guns have become a truly massive weapon in the USSR, however, this did not happen from a good life.

Although the German submachine guns were distinguished by higher accuracy and workmanship, in close combat they all lost to the PPSh with a 71 round drum magazine. At the same time, just over a million MP 38/40 submachine guns were manufactured in Germany by the end of the war. PPSh-41 in the USSR, about 6 million units were produced.

Against this background, the Germans needed the most easy-to-manufacture submachine gun that could be mass-produced. And such a model could be E.M.R. 44 designed by Erma. The model did not go into mass production, but its mark in stories left.

Features of the submachine gun E.M.R. 44

Submachine gun E.M.R. 44 went as a trophy to the American military, who reached the city of Erfurt by April 12, 1945, where the Erma plant was located. With numerous trophies, the model made it to the United States, where it even took part in tests. This model of small arms did not arouse any interest among the Americans, since the German submachine gun did not have obvious advantages over the models of automatic weapons already existing in the West.

The submachine gun captured by the Americans was manufactured in February 1943. Most likely, its development began at the end of 1942 or at the very beginning of 1943. Judging by the appearance of the model, it was an attempt to create a weapon much simpler than the MP 40 produced at that time. In the same 1943, Erma completely discontinued the production of the MP 40 model, switching to the assembly of full-fledged assault rifles. At the company's factory until the end of the war, the assault rifle, known as the StG 44, will be assembled. 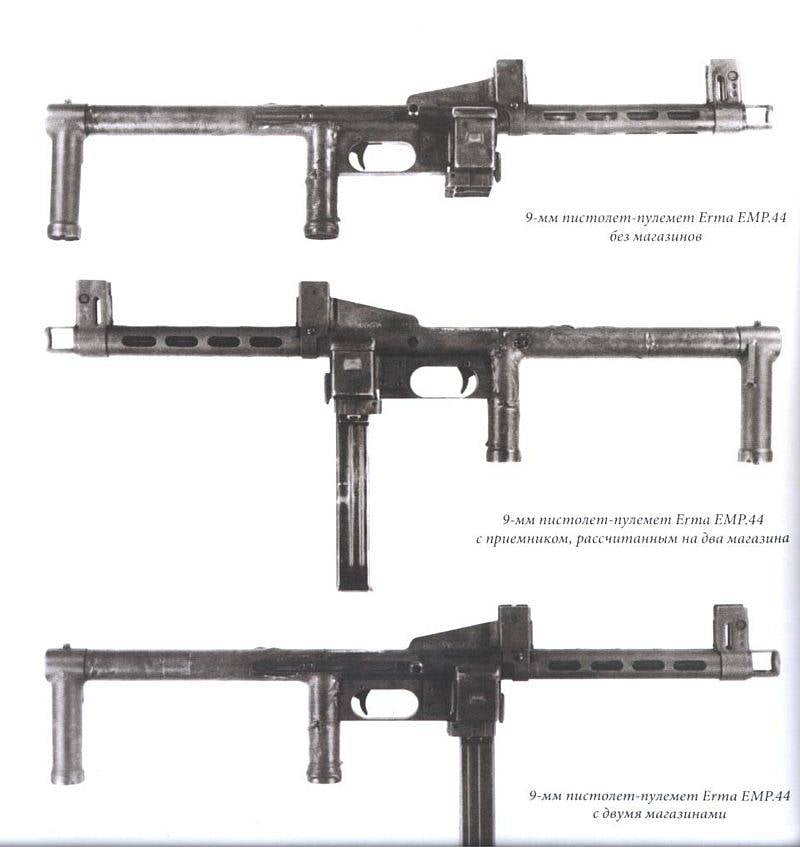 Experienced submachine gun E.M.R. 44 remained just an experiment to create, in fact, an ersatz weapon. Externally, the weapon consisted of pipes that were roughly welded together. This was the reason for numerous post-war jokes and comparisons, today on the Internet this sample of small arms is called a shooting pipe or a plumber's dream. Outwardly, the weapon turned out to be really extremely unpresentable.

A barrel shroud of the same diameter is attached to the tubular receiver of the submachine gun in front. The casing has four rows of slotted windows designed to cool the barrel. The outward appearance of the model shows that the developers from Erfurt were trying to create a model in the production of which only non-scarce materials would be used, and the processing was carried out on universal machine tools and press-stamping equipment.

At the same time, the designers definitely summarized all the many years of experience in the production and use of the MP 38 and MP 40 submachine guns in a combat situation, creating a very simple and cheap weapon for the same 9x19 mm Parabellum pistol cartridge. It was planned to increase the volume of output precisely at the expense of production from available materials, as well as on any available industrial equipment.

It is not known why there were so many pipes in the structure, but the fact remains. The body of the bolt box, barrel casing and butt of the experimental model were made of welded steel pipes, and the pistol grip and tubular shoulder rest were made of light alloys. On the barrel cover there was a simplified compensator, which in its type resembled the Soviet one from the PPS-43 submachine gun. At the same time, the moving parts of the weapon's automation (reciprocating combat spring, bolt) were similar in system to those used in the MP-40.

The trigger mechanism E.M.R. 44 was simplified and did not have a fire mode translator. The submachine gun was designed only for automatic fire. But with the power supply system of the novelty, things were much more interesting. The designers presented a model with a dual magazine receiver. The submachine gun used two box magazines for 32 rounds at once, similar to those in the MP-40. Apparently, in this way the Germans hoped to bring the model's firepower closer to the PPSh-41, without designing new stores with a larger capacity. 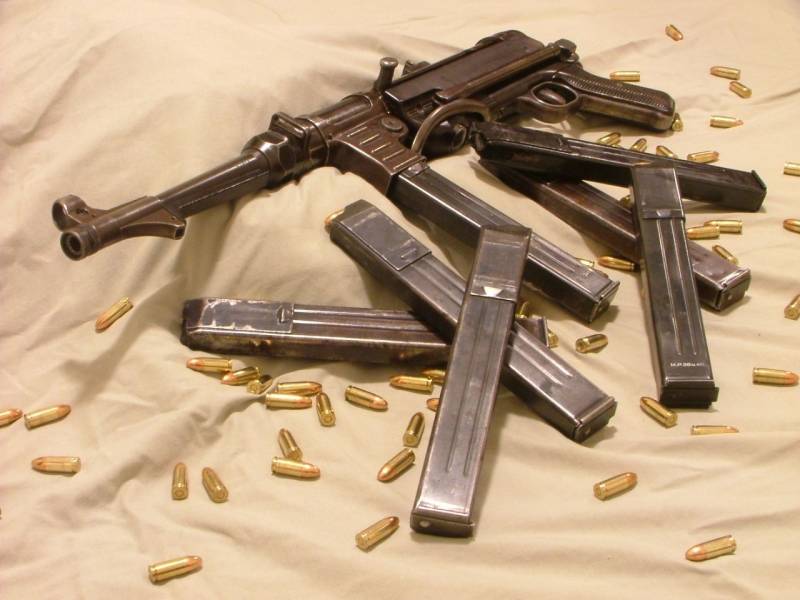 MP-40 and magazines with cartridges for it
Since the butt (shoulder rest) on this model was located on the same axis with the barrel of the weapon, the sights were raised quite high. Sights consisted of a front sight with a front sight and a sight with three strips. The constant was designed for shooting at a distance of 100 meters, and two cross-over - at 200 and 300 meters, respectively. At the same time, the declared effective firing range in some sources indicates less than 200 meters. The maximum rate of fire is 500 rounds per minute.

About the overall dimensions of E.M.R. 44 little is known. The maximum length of the new submachine gun was, apparently, 720 mm, barrel length - 250 mm. By simplifying the design, the weight of the model was reduced. Without shops E.M.R. 44 weighed 3,66 kg. It was 300 grams less than the MP-40 submachine gun and immediately 800 grams lighter than its predecessor, the MP-38. True, during combat operation, the weight of the two equipped magazines was added to the weight of the model, and this is another plus 1,35 kg. In this situation, E.M.R. 44 approached the PPSh-41, which weighed 5,3 kg with an equipped drum magazine.

It is believed that the tests of the E.M.R. 44 did not make much of an impression on the German military. Some sources say that the model has not passed acceptance tests. At the same time, it is known that the model with a dual magazine receiver - MP 40 / I, which was mass-produced, turned out to be unsuccessful. The German military scolded this model for the unreliability of the design and the increased weight of the weapon. It is unlikely that E.M.R. 44 would be much more reliable in this regard.

Another reason why E.M.R. 44 never began to be produced even in small batches, they call the transition to the concept of an assault rifle. The first German full-fledged machine guns MP 43, MP 44, later renamed STG 44, were supposed to replace in the troops not only part of the MP 40, but also the Karabiner 98k rifle. The plant in Erfurt was simply loaded with the release of this model.