The largest weapon in history that has never fought. Mortar Little David 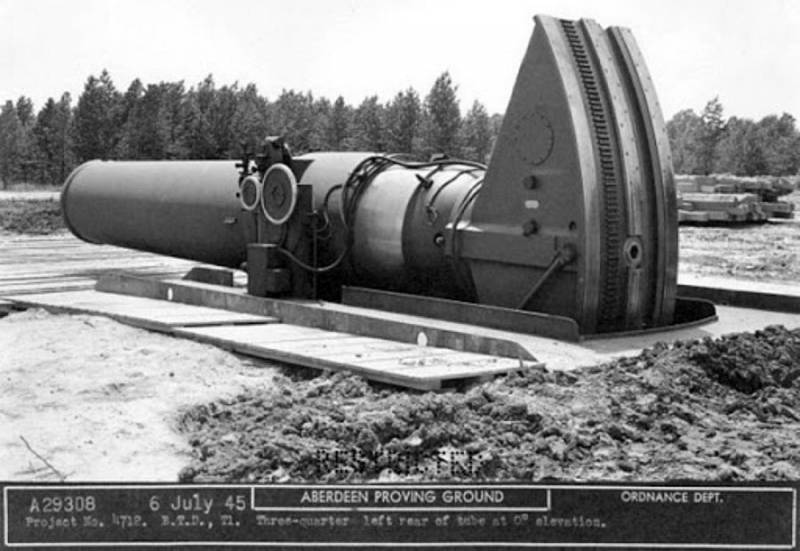 The biggest guns in stories... The sonorous and ironic nickname "Little David" was given to the American 914-mm mortar, built during the Second World War. Despite its impressive caliber, this weapon is superior in this indicator to the huge German railway artillery installations "Dora" and "Gustav" was not intended for military operations.


Experimental 914-mm mortar was developed for testing aviation bombs. Not differing in gigantic dimensions against the background of the "Karl" mortar or the "Dora" installation, the American artillery system holds the record for the largest caliber among all models of modern artillery.

American engineers and designers, unlike their counterparts from the Axis countries, have never suffered from gigantomania. In the USA during the Second World War were not created Tanks, similar to the "Mouse", artillery systems, commensurate with the "Dora", and on navy there were no battleships that could compete in caliber and size with the Japanese Yamato.

It is all the more surprising that it was in the United States in the second half of the 1940s that an artillery system was created, which still holds the record for caliber among modern artillery installations. The caliber of a giant experimental mortar in 914 mm inspires respect even today.

Before the Americans, only the British used this caliber. Mortar Malletdesigned in Great Britain in the 1850s also had a 914 mm caliber. The mortar, which was planned to be used during the Crimean War and the siege of Sevastopol, did not have time for the war and, like Little David, never fought, remaining only a curiosity in history and the British Tsar Cannon, with which tourists willingly take pictures. 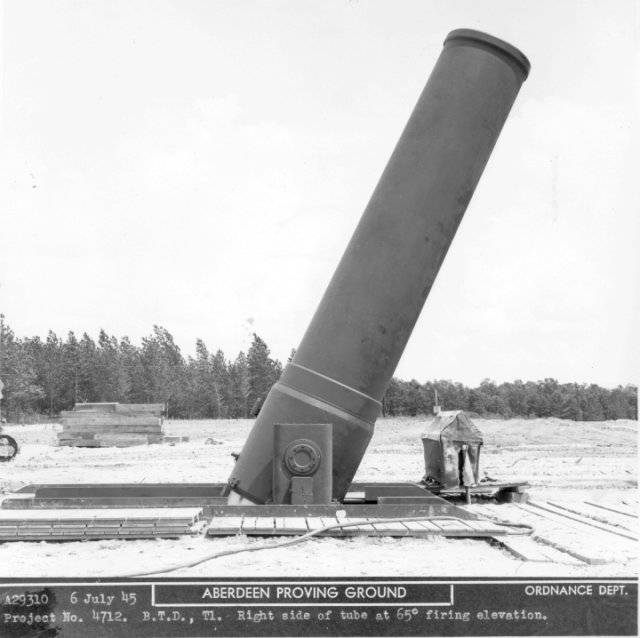 With the help of relatively small powder charges, it was possible to launch an aerial bomb at a distance of several hundred yards from the gun. This practice of testing was in demand, as it was much cheaper than bombing from aircraft. In addition, the tests did not depend in any way on weather conditions and flying weather.

Usually, old 234-mm and 305-mm guns were used for testing. However, the increase in the size of the bombs required an increase in the caliber of the guns. As a result, the United States decided to design a device that received the designation Bomb Testing Device T1. It was this setup that came to be known as Little David.

The unique artillery system was designed by engineers at Mesta Machinery, one of the leading industrial companies in Pittsburgh, Pennsylvania. The company went bankrupt in the early 1980s, but for a long time was the leading manufacturer of industrial equipment in the world. 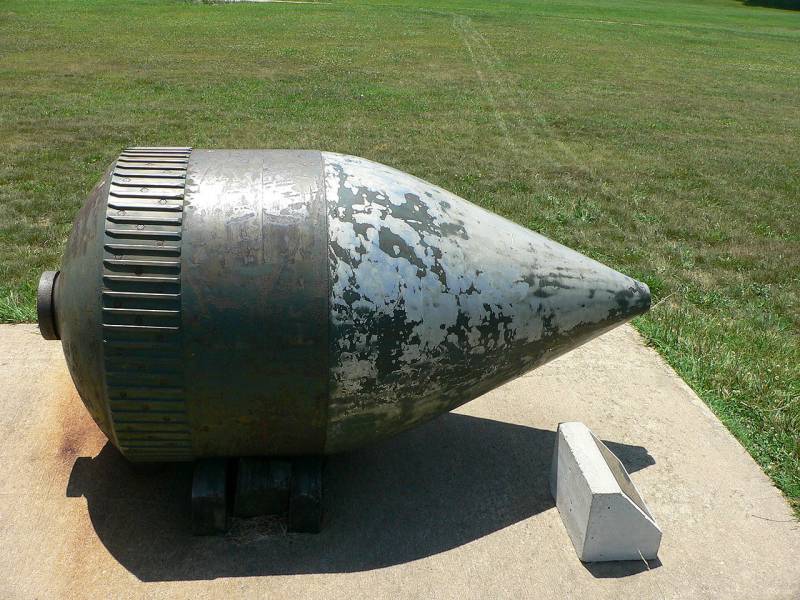 914-mm shell for the Little David mortar
Experimental ammunition for "Little David" was created as part of a government order by engineers at the Babcock & Wilcox military laboratory in Akron, Ohio. This company exists and successfully operates today, having gone from steam boilers to nuclear power and renewable energy sources.

Outwardly, the huge artillery mount was a muzzle-loading mortar with a rifled barrel. The barrel rested on a large steel box weighing 46,5 tons, which burst into a fairly deep hole. The barrel weight was approximately 40,64 tons. The weight is not small, but in comparison with the giant German artillery systems it is quite tolerable, and most importantly - transportable.

In a metal buried box there were mechanisms for vertical guidance of the mortar, as well as six hydraulic jacks, which were needed for mounting and removing the barrel. The barrel of a 914-mm mortar was raised and lowered thanks to a "quadrant" driven from the breech of the barrel. At the same time, the width of the steel box made it possible, if necessary, to carry out guidance and horizontally.

The installation was loaded using a special crane. The loading came from the muzzle of the gun at zero elevation. A curious feature of the mortar was the lack of a knurling plate. The barrel returned to its place after each manual shot. At the same time, the installation had a hydraulic rollback brake.

The dimensions of the steel box buried in the ground were as follows - 5500x3360x3000 mm. The vertical aiming angles of the 914-mm mortar on the target were +45 .. + 65 degrees, the horizontal aiming angles were 13 degrees in each direction. 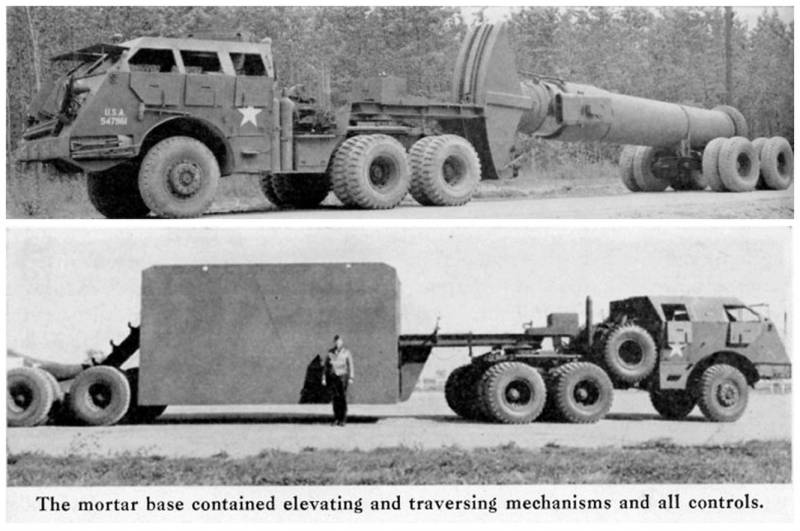 The advantage of the whole design was relative mobility. For the transportation of mortars, it was planned to use modified wheeled heavy tank tractors M26. Each tractor received a two-axle trailer. On one of them the barrel of a mortar was transported, on the other - a steel box and mechanisms for installation. This transportation option made the American mortar much more mobile than most railway artillery systems of comparable calibers.

In addition to these tractors, the artillery crew should have included a crane, a bulldozer and a bucket excavator - all of them were used to place a mortar in a firing position. At the same time, this process took about 12 hours.

The experimental installation Bomb Testing Device T1 has proven itself quite successfully when testing aviation ammunition, so that the military has an idea to use the mortar as a full-fledged artillery weapon. Work in this direction began in March 1944. At the same time, test firing began at the Aberdeen Proving Ground using ammunition specially created for the mortar.

The Americans quickly realized that their Tsar Cannon could also be used for military purposes. The relevance of such an application grew in the light of a possible invasion of the Japanese islands. The American military hoped that they would face serious resistance from the Japanese, as well as a developed system of fortifications. Fighting bunkers and bunkers with a 914mm mortar would definitely be easier.

Especially for these purposes, a powerful high-explosive projectile weighing 1678 kg was developed, in which 703 kg accounted for an explosive. Tests of mortars with this ammunition were carried out at the Aberdeen Proving Ground. Moreover, they quickly revealed the same shortcomings that were inherent in all giant mortars of the past. "Little David" fired not far, but what is even more sad - inaccurate. 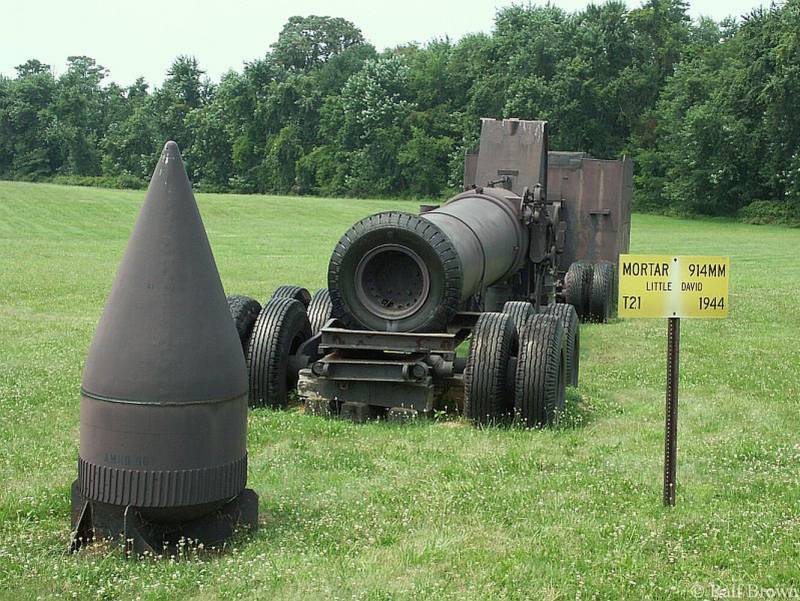 Test firing showed that the maximum range of the projectile was 9500 yards (8690 meters). The American military was not encouraged by the 12 hours that were needed to fully place the mortar in position. Although, compared to the time spent on deploying the German Dora, it was almost an instant, and the mortar itself was much more mobile. Two M26 wheeled artillery tractors could be used to transport it.

All plans for the combat use of mortars were finally buried by the end of the Second World War. Landing on the Japanese Islands was not needed, and the US military found a more terrible and destructive weaponthan 914 mm shells. The era of nuclear weapons was dawning, the power of which Japanese cities felt to the fullest.

After the end of the war, the unusual project was stopped, and in 1946 it was completely closed. The American wonder weapon never left the borders of the Aberdeen Proving Ground. Today the unusual mortar is one of the unique exhibits of the local open-air museum.