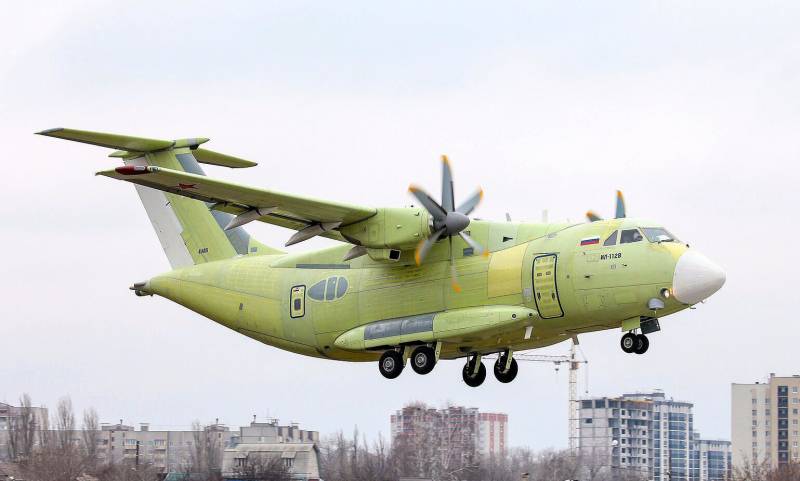 Il-112V made another flight. A reason to seriously think about the prospects, if only because this is the second flight in two years.

Can we consider that we have some kind of prospect for replacing the frankly outdated An-26, whose resource has long come to an end? Frankly, no. The project is so far from being completed that one must speak about it very carefully.

There are many problems. The main problem - the preponderance - is being solved, but it is being solved very slowly. The plane is still struggling to lift off the ground. At the time of the first flight, the overweight was more than three tons. How much the problem was reduced by the second flight, aviation experts are silent.

And here it should be said that today's problems with the Il-112V are not production problems. These are problems of an initially constructive nature and there are quite understandable explanations for this.

It is obvious that the firm has degraded. Mainly due to lack of funding. Everything is classic: there was no money for development, the impoverished staff began to leave, and when funding appeared, it turned out that Ilyushin simply could not work in the same volumes. Despite the money that began to be allocated after 2010 as part of the state armaments program.

Ilyushin lost a lot. In addition to personnel, the assembly facilities in Tashkent were gone. The V.P. Chkalov Tashkent Aviation Production Association remained abroad and finally died in 2012, becoming the Tashkent Mechanical Plant, which deals with everything except the production of aircraft.

Plus the Antonov Design Bureau, which worked in the same direction, one might say, in parallel and hand in hand with Ilyushin, remained in Ukraine and in fact the aircraft of this design bureau, which formed the basis of our transport aviation, also became inaccessible to us.

By the way, in Ukraine, those who are related to these issues, to put it mildly, are not happy with the current situation. The Antonov Design Bureau worked mainly for the Air Force of the USSR and the Russian Federation. Now, with the loss of this segment, the degradation of the company and the actual degeneration began. An aircraft is not particularly needed in the world.

Not a single Antonov project, as they say, has "taken off" over the past 30 years. We will not mention the An-148 project here, which was built mainly in Russia and for Russia. Of the 44 aircraft produced in both countries, 3 were delivered to Ukraine, 2 to North Korea and 39 to Russia. Comments, as they say, are superfluous.

More "Antonov" has nothing to brag about. "Ilyushin" too. The collapsed cooperation of the two firms forced each participant to go their own way, which turned out to be very difficult. But there can be no question of the possibility of joining efforts due to political circumstances.

However, this does not reduce the need for a light transport aircraft. On the contrary. It becomes more and more evident every year. It is also impossible to endlessly patch An-12 and An-26.

And here the same question arises: is it possible to solve the problem of a light transport aircraft, bringing the Il-112V to flight condition?

For a start, finishing the Il-112V in itself is more than a serious task. Associated with huge problems both in personnel and in the mechanism for implementing tasks at the UAC level. While in the bowels of the KLA they are engaged in not entirely clear reorganizations and resettlements, it is unlikely. The administrative resource is diverted to the wrong tasks, which, in fact, is engaged in what interferes with the work of designers and production workers.

What kind of work can be seriously talked about while the management of the UAC is engaged in some strange activity to merge design bureaus, take them out of Moscow, relocate "closer to production" and so on. Signboards, names, legal entities are changing ...

In general, there is movement, the designation of vigorous activity is, there is no result. And it can't be.

Meanwhile, of course, reorganization in the aviation industry is needed. There are frankly dead design bureaus, frankly useless production areas, with which something needs to be done. However, do it without breaking the big picture. Without distracting staff from their immediate duties.

We must also understand that everything, the replacement of personnel has already taken place. Those who created the wings of the Soviet Air Force have already worked their way out. And those who took their place ... let's say, are inferior to Soviet personnel in the same way as the completely Russian Il-112V is inferior to the Soviet An-26.

In addition, another problem should be considered the lack of completely Russian components. Today, the level of imports is simply enormous, no matter what they say from the screen about the complete victory of import substitution. Problems with engines, with composites, with avionics have been, are and still will be. Simply because we are not able to replace everything imported.

This is especially true of avionics and radio electronics, which, of course, can be created, a matter of time and funding. And personnel capable of solving these problems. But all this takes time, time and more time.

And we associate time first of all with "shifts to the right." Correct designation of the term “failed again”.

And "Ilyushin" can be blamed for another "long-term construction" - IL-114. Yes, on the one hand, this is a medium-haul passenger aircraft. On the other hand, there is a transport or patrol aircraft. In general, virtually any civilian aircraft can be used as a military aircraft. Proven long ago.

So the Il-114 is the plane that naval aviation badly needed for a long time, which today is a gathering of veterans released in the last century. They say that the Il-114 will go into production from 2023, although in the first conversations 2022 was named. But this is again to the question of "shifts to the right."

It is a pity that for Ilyushin this is becoming commonplace. Or the norm, if it's more convenient. But it is 2023 - there is absolutely nothing left before it, we will see how everything will happen.

We really need both a light transport plane and a naval patrol aircraft from Ilyushin. In 2022, in 2023, it doesn't matter. In general, they were needed yesterday.

And today the public joint-stock company "Aviation Complex named after S. V. Ilyushin", unfortunately, only demonstrates its helplessness in matters of development and construction of aircraft. The necessary aircraft, we note. For the fact that the Superjet and MS-21 do not want to fly can still be experienced and fly on Boeings and Airbuses, but in military aviation, unfortunately, you cannot do without them.

Realizing the need to replace old aviation equipment in military aviation, I still want to urge the UAC leadership not to engage in outright nonsense in the form of renaming legal entities, shuffling "effective managers", changing signs and logos, rebranding and other nonsense.

Since 1991, the Ilyushin firm has changed its signboard five times. Did it improve the performance a lot? Not at all. But how much time and money was spent on it?

We need planes. Today. Maximum tomorrow, although "tomorrow may be late", as was sung in one song. The fleet of modern transport and naval aviation is decreasing at a rapid pace, and instead of engaging in incomprehensible gestures with signs, it is better to spend time and money to finalize and start producing the machines that are so necessary for the Russian military aviation.

And finally, to solve the personnel issue. Nothing will be built without engineers who have gone away from the "huge" factory salaries.

In the early 2000s, work began on the Il-112V military transport aircraft. In April 2004, the Il-112 project won the competition for the development of a VTA aircraft for the Russian Air Force. It is 2021 and all that can be bragged is two flights, which were separated by two years.

It is clearly too much to work on errors. Such a pace is completely unacceptable today when it comes to what will fly with us tomorrow. And if you look at history with the Il-114, it becomes clear that decisive action is needed today.

Until it's really too late.