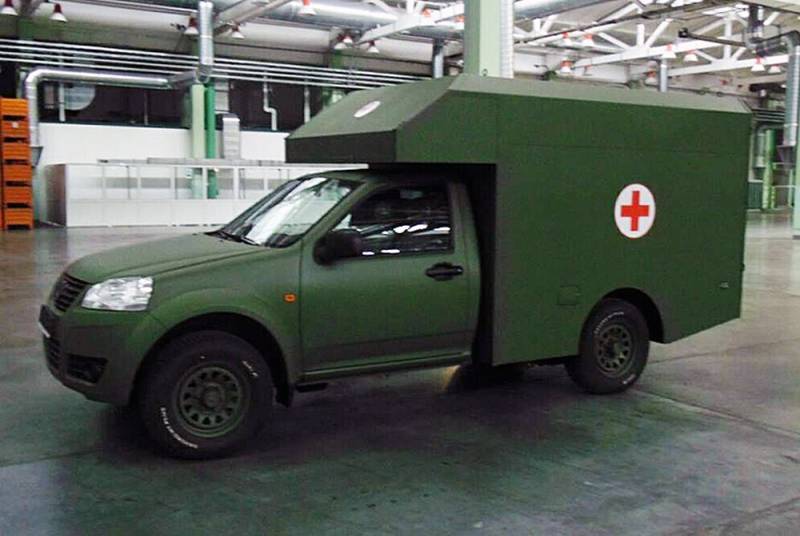 In 2016, the Ukrainian Armed Forces launched a program to renew the vehicle fleet of their medical service. At that time, Soviet-made cars were used as ambulances, and it was planned to replace them with modern cars "Bogdan-2251" of our own design. For several years, a large number of such machines have been purchased, but their operation has encountered a lot of problems.

Until recently, the main sanitary transport of the Armed Forces of Ukraine remained the vans of the Ulyanovsk Automobile Plant, produced in the days of the USSR. Such a technique managed to develop a resource, and its further operation turned out to be unprofitable and inexpedient. A replacement was required in the form of a modern machine that fully meets the current requirements.

In 2016, the Bogdan corporation presented a project of the Bogdan-2251 ambulance vehicle, developed on the basis of an existing platform with the use of modern target equipment. It was argued that the project was developed with the participation of specialists from the Ministry of Defense and takes into account the experience of military doctors on the front line.

In the autumn of the same year, the car went through all the necessary procedures and was recommended for serial production. The assembly of the equipment was launched in November. It was reported that the development organization can quickly deploy the mass production of new equipment. The first batch of 60 vehicles was promised to be delivered by the beginning of 2017, and 2018 units were expected to be delivered by the beginning of 130. 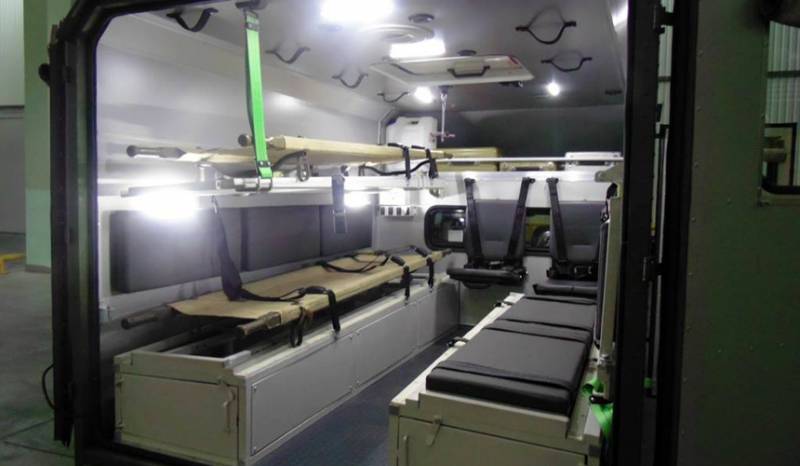 The interior of the medical module. Photo "Bogdan"

The Bogdan-2251 ambulance was built on the basis of a Chinese-made Great Wall Wingle 5 two-axle all-wheel drive chassis. Such machines were purchased in China and delivered to the Bogdana plant in Cherkassy, ​​where the final assembly was carried out. It was argued that the chassis is being finalized and reinforced, after which it receives a van with targeted equipment. The van is quick-detachable and can be dismantled for replacement or installation on another chassis.

Wingle 5 is originally a frame pickup truck with two or one row cab. The second option was used in the Ukrainian project. The cab and engine compartment remain standard and do not receive additional protection. The car is equipped with a turbocharged diesel engine Great Wall 4D20 with a capacity of 143 hp. and a six-speed manual transmission. There is a transfer case with front-wheel drive plug-in.

A large van for medics and the wounded is mounted on the back of the frame; it has a simple rectangular shape and has a front compartment overhanging the cab. The van is made of aluminum sandwich panels and has thermal insulation. Access inside is provided through a door on the starboard side and through the stern. The medical module is equipped with a filtration unit and a heater. Both cabins received voice communication.

Inside the van there are several places for the wounded and orderlies. There are stretcher mounts on the right and left side of the walls: two are installed on the left and one on the right. Beneath them are boxes for property, which can also accommodate seated wounded. Two more seats are placed against the front wall of the van. "Bogdan-2251" can carry up to three bedridden or up to seven sedentary wounded, as well as a medic. 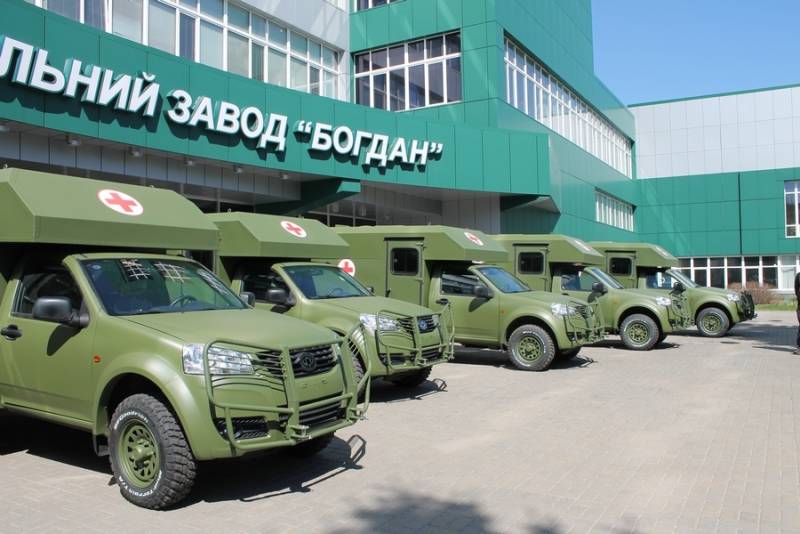 The first batch of production vehicles, April 2017 Photo Ukrmilitary.com
The car carries a stock of medical supplies and medicines. There are mounts for droppers and other equipment for providing first aid and maintaining the patient's condition until delivery to a medical facility. The composition of the equipment is determined by the customer in accordance with his needs and capabilities.

The length of the vehicle with the new equipment reaches 5,5 m, the height has increased to 2,5 m. The total weight is 3,72 tons, of which 600 kg are for the medical module. A significant part of the carrying capacity of the chassis was spent on this product, which is why the "Bogdan-2251" can only carry 375 kg of payload. The car's crew includes three people, including two medics.

The first batch of new ambulances was expected at the end of 2016, but these plans could not be fulfilled. The first machines were handed over in April 2017. In the following months, the customer received another 90 machines, but only half of the delivered equipment reached actual operation. The technique was used "in the rear" and in the zone of the so-called. anti-terrorist operation. During several months of such operation, 25 machines had to be sent for repair.

In early 2018, it was announced that Bogdany-2251 in its current configuration has a number of serious problems. The main reason for the repair was damage to the engine and fuel system. The investigation showed that the personnel are careless about the equipment and are not familiar with the operating instructions. As a result, water and mechanical particles got into the tanks of cars along with diesel fuel.

Operators noted excessive swaying of the vehicle while driving. In some circumstances, this not only impaired ride comfort, but also threatened the health and life of the wounded being transported. 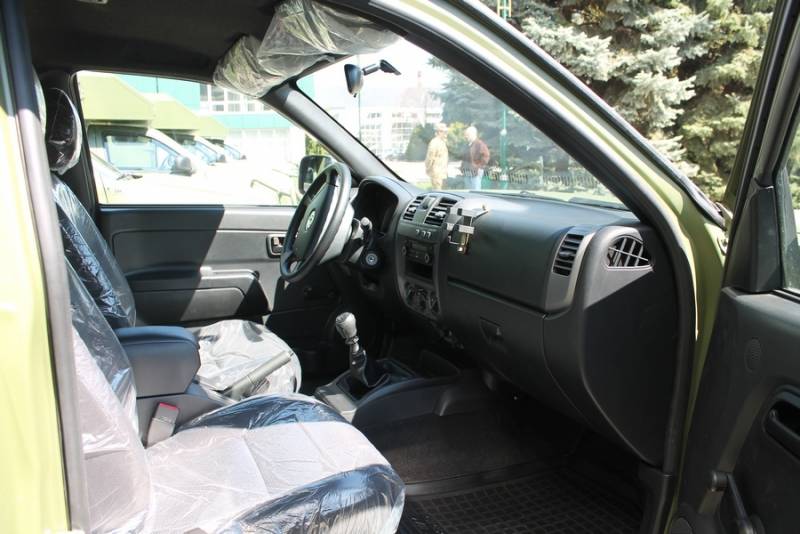 Cabin interior. Photo Ukrmilitary.com
The economic aspect of the project should be noted separately. The Wingle 5 chassis is known to cost less than $ 8,7. The cost of the finished "Bogdan-2251" for the Armed Forces of Ukraine, in recalculation, exceeds 30 thousand. Whether such a surcharge for a medical module is justified is unknown. Probably, this price includes a corruption “markup”.

At the beginning of 2018, a list of necessary modifications to the structure of fifty points was prepared. The working group found that most of these problems can be eliminated through proper operation. The remaining 20 requirements were taken into account when finalizing the project. In particular, a new fuel filter with a drain was provided. After finalizing the project, production was resumed, and in June the first batch of new production machines was sent to the customer.

During 2018, the Armed Forces of Ukraine received 101 ambulances of a modified design. The following year, another 149 units were handed over to the customer. Thus, in 2017-19. 350 modern vehicles appeared in the medical units of the Ukrainian army, which made it possible to close their requirements. In addition, most of the obsolete equipment was replaced.

However, there was no reason for joy. Not so long ago, a document dated the beginning of March 2021 got into the public domain. According to it, by mid-February in the zone of the so-called. ATO out of order 28 ambulances. 26 units have various breakdowns of the fuel system, 1 needed engine repair, 1 more - repair of the cooling system. The reasons for such breakdowns remain the same and lie in the illiterate maintenance of equipment. 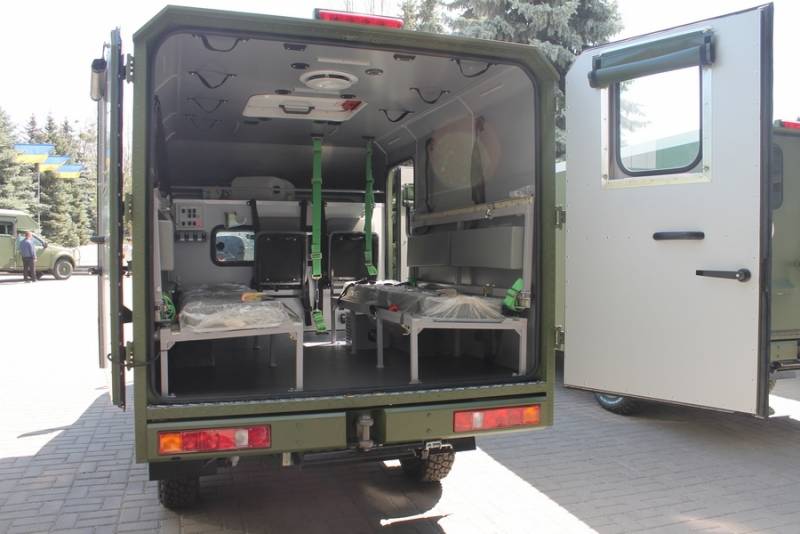 The medical compartment of the production car. Photo Ukrmilitary.com
Once again, recommendations of an operational nature were issued, designed to exclude the most frequent breakdowns. Whether they will help this time is a big question. In just a couple of years, "Bogdana-2251", despite the revision, twice faced the same problem. This leads to special thoughts and allows you to expect similar events in the future.

Car against the background of contemporaries

In general, the ambulance vehicle "Bogdan-2251" cannot be considered an unambiguous development. This pattern has pros and cons, and there are various additional factors that can be critical. Nevertheless, despite all the shortcomings and problems, the car was accepted for supply and was mass-produced.

The main advantage of "Bogdan-2251" is the very fact of its existence. The Armed Forces of Ukraine were able to replace obsolete vehicles with a depleted resource and get modern technology. The problem of lack of own production of the necessary platforms was solved by import. At the same time, the selected chassis shows sufficiently high technical and driving characteristics and generally meets the requirements.

At the same time, a significant load was placed on the Chinese chassis, due to which the carrying capacity was reduced to a minimum, and this deteriorates other characteristics. The van turned out to be too tall for confident behavior on the highway and off-road. Finally, the cost of the finished ambulance is too high compared to the price of the base chassis.

An obvious question arises: why not the most successful development reached production and ended up in the troops, and the identified shortcomings did not lead to its abandonment? The answer to it lies in the peculiarities of the modern Ukrainian approach to the supply of the army. The Bogdan Corporation had and still has a serious lobby capable of promoting its developments at all levels - despite their shortcomings, excessive prices, etc. This resulted in another large and profitable order for equipment for the army. 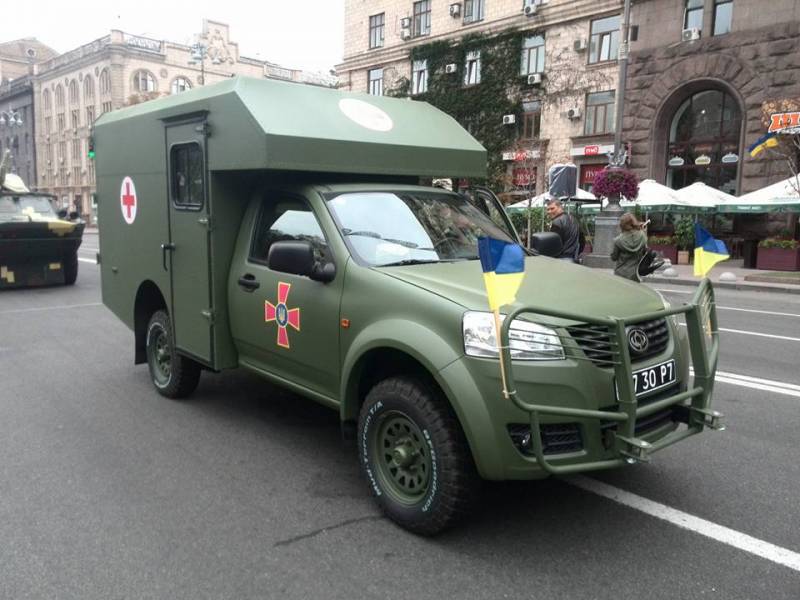 One of the first "Bogdanov-2251" at the parade, 2017. Photo Wikimedia Commons
It cannot be said that the armed forces lost from these processes. For the first time in several decades, they were able to renew their fleet of medical equipment and almost completely abandon old-fashioned machines. However, the price of this turned out to be too high, since “individuals” wished to receive their share of the army budget once again.

Thus, the Ukrainian Armed Forces received 350 ambulance vehicles they needed on a modern base, but with some drawbacks. Due to its quantity, Bogdany-2251 will remain the main model of its class for a long time; their quick replacement is not possible. This means that the Ukrainian military and car manufacturers need to solve the problem of reliability and correct operation of equipment as soon as possible - otherwise it will not be able to fully solve its problems and justify excessive spending on purchases.

The specific situation with the ambulance in a known way affects the combat capability of the army. "Bogdany-2251" are intended for the evacuation of the wounded from the front line, and their breakdowns threaten the health and lives of soldiers. In particular, this means that any attempt to arrange large-scale battles in the Donbas will lead to an increase in losses: not only due to bullets and shrapnel, but also due to a lack of assistance. The military and political leadership of Ukraine should take such risks into account. Of course, if it takes care and pity for its own soldiers.