Unique and forgotten: the birth of the Soviet missile defense system. Lebedev and MESM

17 May 2021
23
We stopped at the fact that by the end of the 1950s in the USSR there was not a single computer capable of effectively solving the task of targeting an anti-missile missile. But wait, we were one of the pioneers of computer technology? Or not? Actually история Soviet computers are a little more complicated than they seem.

It began in the Union immediately after the war (with a slight lag behind the United States and Great Britain, ahead of all other countries) independently in two places (Kiev and Moscow), with two people - Sergei Aleksandrovich Lebedev and Isaac Semenovich Brook (MESM and M-1 machines respectively).

Just like his colleague Brooke, he receives the first information about the development of a fundamentally new class of computing technology - digital machines in a roundabout way from abroad. The chairman of the Academy of Sciences of the Ukrainian SSR from 1930 to 1946 (when he died of tuberculosis) was the famous Soviet biologist and pathophysiologist Alexander Aleksandrovich Bogomolets, who gathered around him a team of outstanding specialists in various fields of science, including mathematician Mikhail Alekseevich Lavrentiev, the future founder of the legendary Siberian branch of the Academy of Sciences of the USSR (in addition, it will still play a significant role in the development of early computers).

The son of A. A. Bogomolets, Oleg, also a biologist, was an inveterate radio amateur and, during his business trips to Switzerland, collected various magazines on electrical engineering and radio electronics. They included, among other things, descriptions of the work of the computer pioneer Dr. Konrad Ernst Otto Zuse, who developed the Z series for the ETH Zurich (the Z4, then under construction, became in 1950 the only working computer in continental Europe and the first computer in the world to was sold five months ahead of Mark I and ten months ahead of UNIVAC).

Returning to Kiev in the summer of 1948, OA Bogomolets shared these materials with Lavrentiev, the latter with Lebedev. And already in October 1948, the inspired Lebedev began to create MESM.

Despite the terrible conditions of post-war Ukraine, Lebedev's team, starting from scratch, managed two years later, on November 6, 1950, to carry out a test run (it took so much time for the car, among other things, because the MESM required more than 6000 lamps, and about a third of they were delivered from the factory defective). A year later, after successful testing by a commission of the USSR Academy of Sciences headed by Academician M.V. Keldysh, regular operation of the machine began.

Interestingly, the premises of the former monastery hostel in Feofaniya were so unsuitable for the operation of a huge lamp computer that part of the ceiling had to be demolished in the laboratory in order to remove the heat generated by thousands of lamps from the room. The conditions for creating MESM were hellish and not at all like the laboratories where ENIAC, Harvard Mk I and other computers were built in the United States. 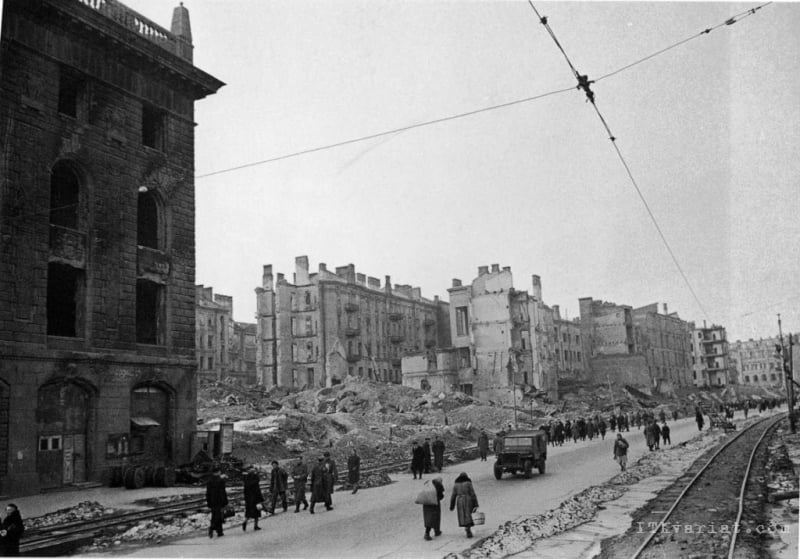 Kiev after the war. The first creators of Soviet computers worked in such conditions (itkvariat.com)
MESM needed a room with an area of ​​about 150 sq. m. and about the same - for generators, batteries and control automation. Plus workshops, worker dorms, and more. It was very difficult to find such a building in Kiev destroyed by the war. The building in Feofaniya was in disrepair, at first it had to be repaired. Every day a specially dedicated bus drove from Kiev to the developer's village, but at 17 o'clock he left back. People stayed at work for several days or even weeks.

... in addition to the machine itself, it was necessary to develop and make various technological equipment ourselves, and not only standard equipment, but also previously not provided for - a special device for selecting pairs of lamps for triggers (matched in characteristics in each pair), a lamp filament stabilizer (without which lamps malfunctioned and generally quickly failed), etc., etc. Sometimes the need arose for completely unusual actions - such as obtaining various radio components from military equipment dumps - resistances, capacitors, etc. that everything was done for the first time - in the sense that nothing was borrowed.
In addition, Lebedev faced another problem. His staff included Jews! Again, a word to Rabinovich:

Sergei Alekseevich even had a lot of trouble because of this. An anonymous denunciation was written against him to the Central Committee, in which one of the main accusations was the promotion of Z. L. Rabinovich at work, and, in particular, assistance in his dissertation work (such was the time!). The denunciation as a result of the check was found defamatory, but, as they say, he spoiled Sergey Alekseevich's nerves a lot. It cost me a delay in defense for a year and a half - since it took additional closed review of the work ... I also cannot help but tell that Sergey Alekseevich still had a chance to defend me from the demands of my dismissal of some higher verifying authorities, in view of the campaign being carried out at that time the desirable reduction of Jewish researchers working on closed topics. Besides me, there was another researcher with the same passport, deputy head of the laboratory (S.A. Lebedeva) Lev Naumovich Dashevsky, and the presence of two such researchers in one laboratory was extremely undesirable ... But Sergey Alekseevich took a principled position, which at that time was not at all easy, and resolutely defended me.
As a result, in the fall of 1952, MESM performed calculations for the generators of the Kuibyshev hydroelectric power station. Learning that Feofania has a working computer, Kiev and Moscow mathematicians were drawn there with problems that required large-scale calculations. MESM worked round the clock counting thermonuclear reactions (Ya.B. Zel'dovich), ballistic missiles (M.V. Keldysh, A.A. Dorodnitsyn, A.A. Lyapunov), long-range transmission lines (S.A. Lebedev himself), statistical quality control (B.V. Gnedenko) and others. The first programmers in the USSR worked on this machine, including the famous mathematician MR Shura-Bura (he was "lucky" to work later with our first serial computer "Strela", and he spoke of it with horror, but we will tell about this later) ... 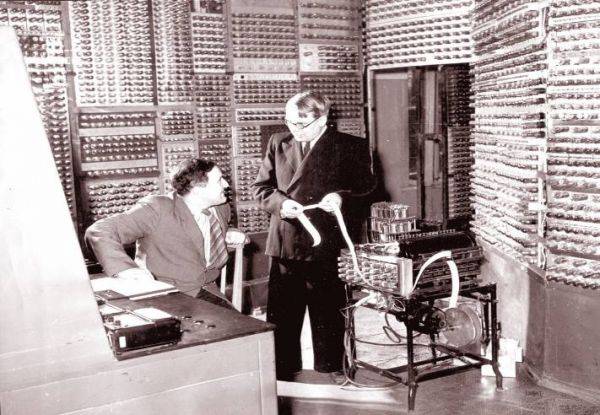 This is how it looked like working with MESM, note that the machine occupies all available wall surfaces, being simply mounted on them
Despite this, Lebedev did not receive any official honors (Rabinovich recalls):

I will tell you about one more unpleasant circumstance. It is perplexing that the work on the creation of MESM, being presented for the Stalin Prize in the person of its main authors S. A. Lebedev, L. N. Dashevsky and E. A. Shkabara, did not receive the prize. This fact, perhaps, reflected a misunderstanding of the importance of digital computing on the part of government agencies and even the then leadership of the Academy of Sciences of the Ukrainian SSR, in which, as in Kiev in general, there was no longer Mikhail Alekseevich Lavrentyev, who did so much to deploy work on the creation of MESM and then the Big Electronic Counting Machine (BESM). But, as they say, we survived. The car was, it worked well and was in an aura of fame and keen interest in it, and this gave its creators great joy.
MESM was used until 1957, until it was finally outdated, after which it was transferred to the KPI for educational purposes. In 1959, it was dismantled, the Ukrainian historian of computer technology Boris Nikolaevich Malinovsky recalled it this way:

The car was cut into pieces, a number of stands were set up, and then ... thrown away.
Several electronic tubes and other components remaining from the MESM are kept in the Foundation for the History and Development of Computer Science and Technology at the Kiev House of Scientists of the National Academy of Sciences of Ukraine. However, a similar fate awaited ENIAC and, in general, practically all the first computers - neither in the Soviet Union, nor in the West, no one particularly bothered to create museums of computer technology. In the USSR, they did this with absolutely all computers - they dismantled both the Setun and all the first BESMs for scrap. Programmer of the first Soviet computers Alexander Konstantinovich Platonov, mathematician of the Institute of Applied Mathematics (an interview with him from 2017 was published on Habré) bitterly recalls:

Then I felt so sorry for this remote control. When the BESM was being broken, I asked Melnikov: "Why not to the museum, the whole country was working?" And he says: "And they have no place!" Then the employees of the Polytechnic Museum, in front of my eyes, ran, trying to find at least something. Here it is, the lack of culture.

Few people know that after Lebedev left for Moscow, his group, on the basis of his ideas, implemented (here already the general designer was the aforementioned Z. L. Rabinovich) an even more amazing idea - the so-called SESM, a Specialized Electronic Counting Machine. Its uniqueness lay in the fact that the SESM was a specialized computer, and a matrix-vector (!) One, one of the first, if not the first, in the world.

SESM was intended for solving correlation problems and systems of algebraic equations with 500 unknowns. The machine operated with fractions and had a current automatic control of the order of magnitude. The calculation results were given in the decimal system with an accuracy of the seventh digit. Based on the Gauss-Seidel LAU method adopted for SESM, the arithmetic device performed only addition and multiplication, but the computer turned out to be elegant - only 700 lamps. 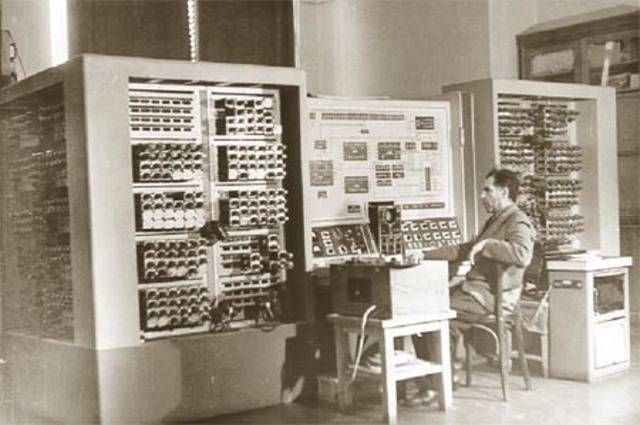 Specialized electronic calculating machine "SESM", at the control panel S. B. Rozentsvaig (icfcst.kiev.ua)
Surprisingly, it was not classified. And it became the first Soviet computer to receive a laudatory review in the then-just appeared American computer magazine Datamation.

Moreover, a monograph written based on the results of the development ("Specialized electronic calculating machine SESM" Z. L. Rabinovich, Yu. V. Blagoveshchenskaya, R. A. Chernyak and others, Glushkov insisted on the publication of the book, the developers themselves were not particularly looking for fame, as a result he was right in securing our priority in this area) was reissued in the USA in English. And, apparently, was one of the first books on domestic computing, published abroad.

Zinovy ​​Lvovich himself worked a lot and fruitfully in the field of computer science until the 1980s, together with such titans of world electronics as Academician V.M. Glushkov, including on air defense systems (it seems that in those years absolutely all computer Soviet specialists were involved in two areas: missile defense or air defense).

As we said, MESM was conceived by Lebedev as a prototype of a large machine (with an unpretentious name BESM), but it was unrealistic to implement a much more complex development in the dilapidated war of Feofania in Ukraine. And the designer decided to go to the capital. Let us again give the floor to Platonov (we will discuss ITMiVT and their relation to BESM in more detail below, there are many interesting things):

And there at that time for several years already a second group was working on their own, completely independent computer - under the leadership of Isaac Brook.