Construction of UDC "Type 075" for the Chinese naval forces 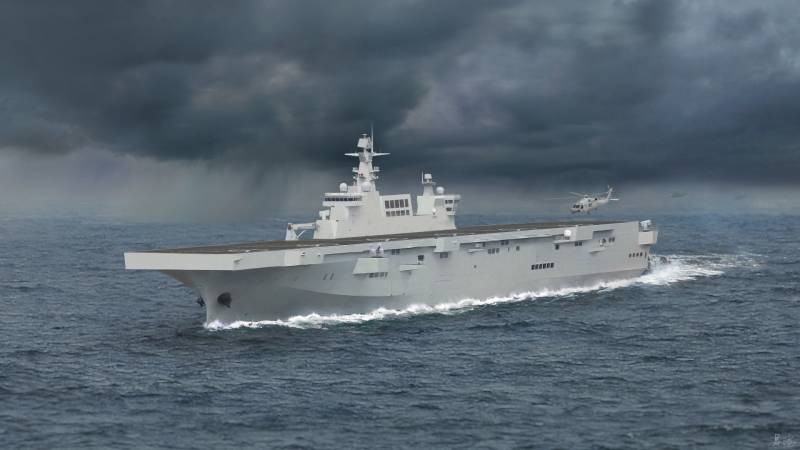 The Chinese program for the construction of universal amphibious assault ships / amphibious assault helicopter docks (UDC / DVKD) shows new successes. On April 23, a solemn ceremony took place, during which the head UDC of the new project "Type 075" was accepted into the PLA Navy. Two more such ships are planned to be delivered in the coming years, and together they can seriously change the capabilities of the amphibious forces. fleet.

From news to construction

The first reports about the development of a new Chinese project UDC appeared in 2012. Then this project appeared in the news under the indexes "071A" and "081", and the first images of the promising ship were freely available. In 2013, there was a rumor about the possible start of construction of a new type of head DVKD, however, as it turned out later, this information did not correspond to reality.

In 2015, Chinese shipbuilders at one of the exhibitions for the first time showed a couple of concepts of promising UDCs of their own design. The shown layouts attracted attention and made you remember the news of previous years. A version appeared and became widespread, according to which one of the demonstrated concepts will soon be implemented in metal. 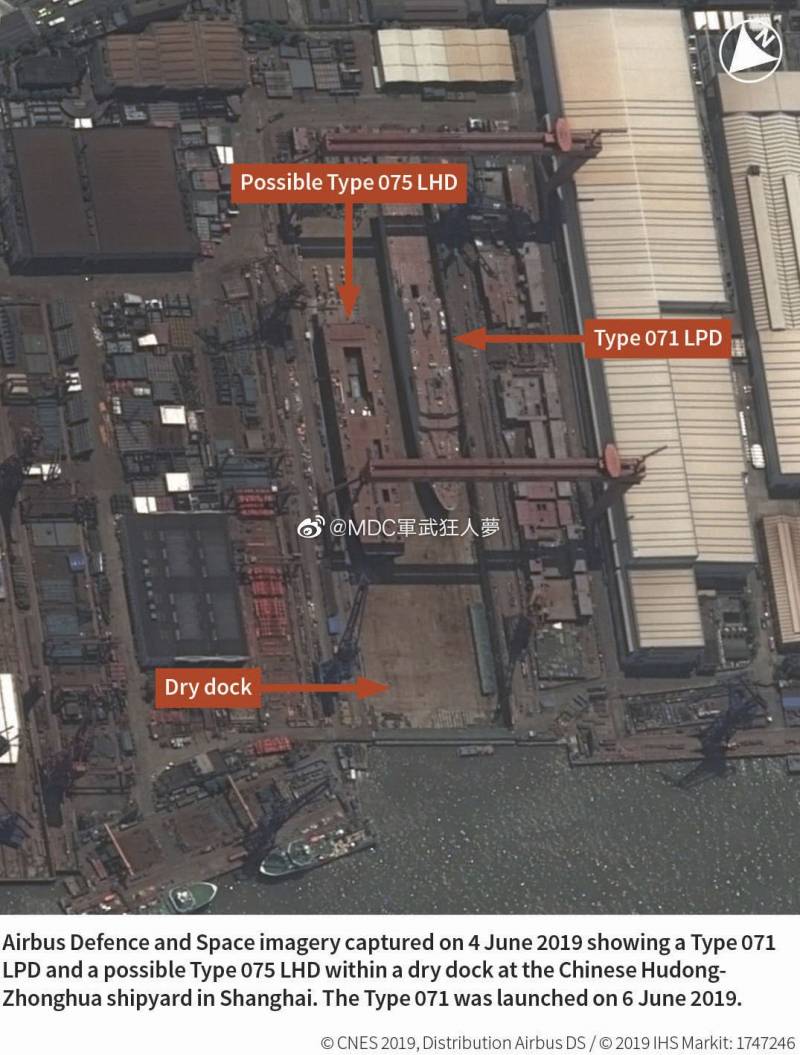 Construction of new landing ships, June 2019 Photo Twitter.com/RupprechtDeino
In the fall of 2016, it became known about the real plans of the PLA Navy for the construction of landing ships. The Type 075 project was approved for construction and the contract was awarded to China State Shipbuilding Corp. (CSSC). It was planned to start cutting metal in the 1st quarter of the next 2017.

It is curious that the ceremonies for laying new UDC pr. "075" were held in a closed format, and they were not reported. The dates of the formal start of construction are still unknown. At the same time, in the summer of 2019, it was officially announced that there are already three ships on the stocks at different stages of construction. In addition, the Navy announced its intention to build three more buildings - after the completion of the current work.

Cutting metal for the construction of the head UDC of a new type began at the Hudong-Zhonghua Shipbuilding plant in Shanghai in the first months of 2017 and took some time. The bookmark of the ship, according to various data and estimates, took place no later than the beginning of 2018. Later, the ship was named Hainan.

For a long time, the details of the construction remained unknown. In the summer of 2019, several interesting photographs from satellite and from the ground appeared on profile resources. They showed the dry dock of the plant, where the UDC of projects "071" and "075" were under construction. The latter was at the stage of assembling the hull structures and looked little like a finished ship. 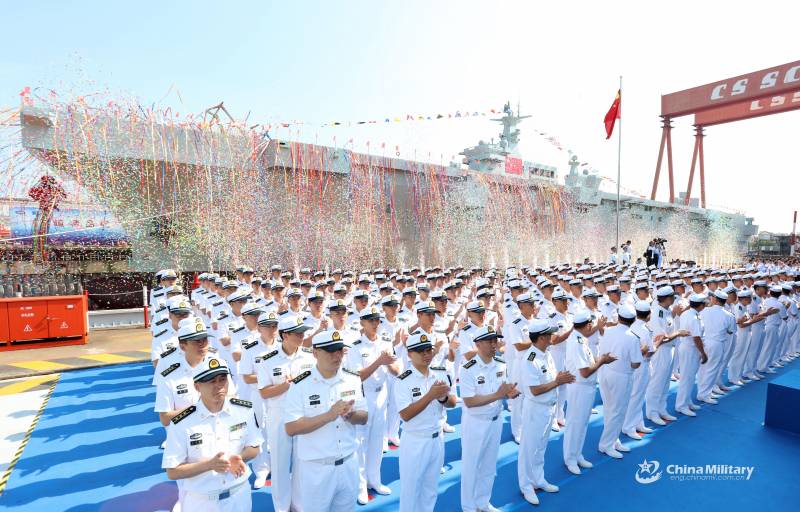 Launching the lead ship of the series. Photo by the Ministry of Defense of the People's Republic of China
On September 25, 2019, a solemn ceremony of launching the lead ship took place. By this time, work on the hull was completed, and the superstructure was installed. From the construction dock, the UDC was transferred to the outfitting wall to be equipped with the remaining systems and units.

On April 11, 2020, a fire broke out at Hainan. The fire occurred in the central or aft part of the ship, on the landing deck or in the dock chamber. Thick smoke poured from various openings, hatches and hatches; soot covered the aft part of the hull. The causes, consequences and damage from the fire were not officially reported. At the same time, in just a few days, all external manifestations of the fire that had occurred were removed from the ship. The consequences of the accident were liquidated and construction continued, without significant delays from the schedule.

By mid-May, the ship was brought to mooring tests. At the same time the first launch of the main power plant took place. In early August, "Hainan" first went to sea for sea trials. 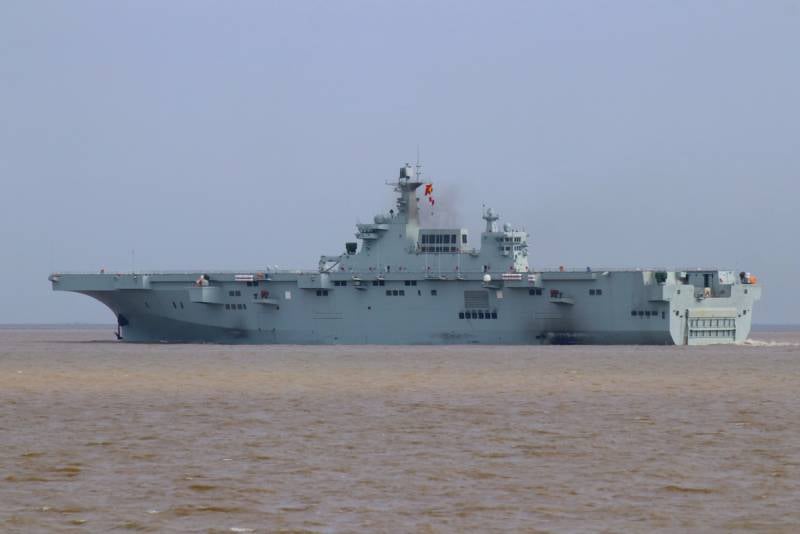 "Hainan" on sea trials, August 2020 Photo by the Ministry of Defense of the People's Republic of China
On April 23, 2021, at the Sanya naval base (Hainan Island), a solemn ceremony was held for the acceptance of several new combat units into the PLA Navy. In the presence of the country's top leadership, the flags of the fleet were raised on the Hainan UDC, as well as on the third destroyer, project 055, and on the sixth submarine, project 094.

In 2018 or 2019 (exact data are not available), construction of the first serial UDC of a new project began in Shanghai. This ship was launched on April 22, 2020 and transferred for completion. According to the latest reports, it has already begun sea trials, which will take several months to complete. The approved schedule provides for the delivery of the second ship of the series in 2022, and so far such dates look quite realistic.

Not earlier than 2019, the Hudong-Zhonghua Shipbuilding plant laid the foundation for the third ship of the new type. The first photos from the construction dock appeared in November last year and showed structures gradually acquiring the features of a full-fledged ship. On January 29, 2021, this UDC was taken out of the dock for completion at the wall. This year or next, he will be released for testing, and admission to the combat strength is expected in 2022-23. 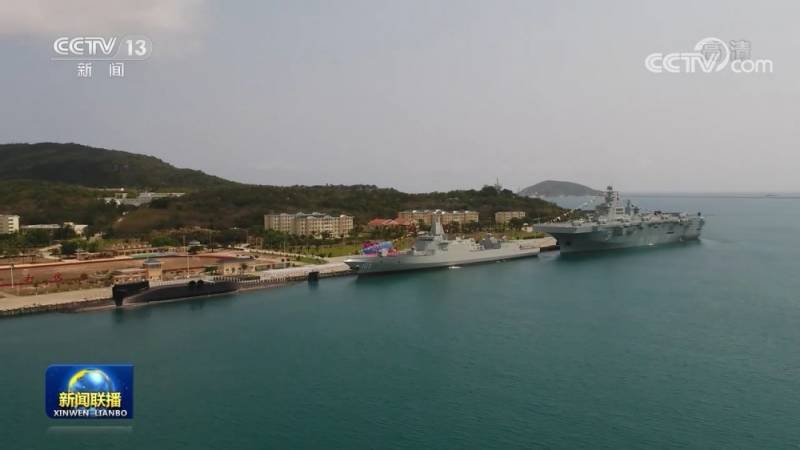 New ships at the admission ceremony, April 23, 2021. Still from CCTV report
So far, only three Type 075 ships are known to be built. This program has been partially completed and will cope with all the tasks in the next year or two. According to reports from previous years, upon receipt of positive experience in operating three new UDCs, an order for three more ships may appear. Moreover, some sources mention the possibility of expanding the series to 8 units. The final decision on the required number of ships has not yet been made and will appear only in the coming years.

The Type 075 project envisages the construction of a ship with a length of approx. 240 m with a full displacement of approx. 35-36 thousand tons The ship is believed to have a gas turbine propulsion system. A large flight deck with six take-off positions was built. Inside the hull there are crew and landing quarters, as well as a hangar deck, a deck for land equipment and a stern dock chamber for landing boats.

According to known data, the new UDC is capable of transporting up to 30 helicopters for various purposes. Depending on the tasks assigned, helicopters of different types will be able to land troops and support them with fire, as well as carry out anti-submarine defense or radar patrol.

Foreign sources mention the possibility of transporting an assault force in the amount of 1-1,2 thousand people. Dimensions and capacity tank decks and dock cameras are unknown. Judging by its size, the ship is capable of transporting up to several dozen armored vehicles, incl. tanks, as well as several landing boats. 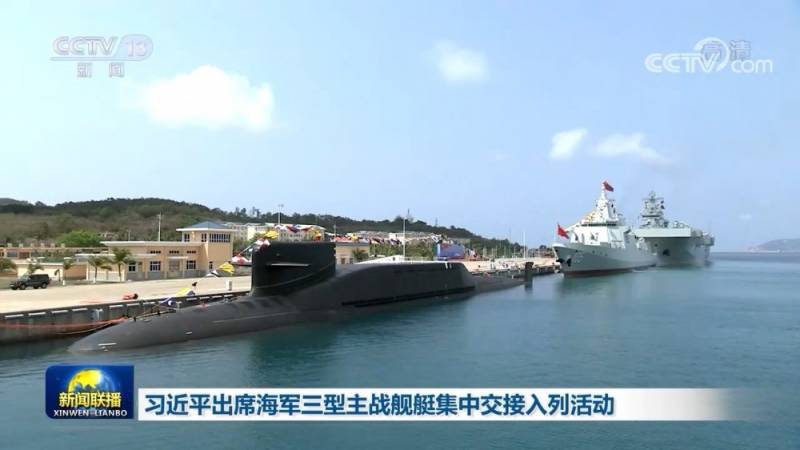 UDCs of a new type are intended to work as part of ship groups, and their protection is assigned to other combat units. For this reason, "Hainan" and other "075" carry a limited range of weapons. The project provides for the use of two H / PJ-11 artillery mounts with 30-mm machine guns and a pair of short-range HQ-10 missile systems.

At the moment, the PLA Navy has a fairly large amphibious force. They are based on approx. 30 large landing ships of project 072 of several modifications. Such ships with a displacement of 4,8 thousand tons are capable of transporting up to 10 armored vehicles, 2 helicopters and up to 250 soldiers. Unloading of equipment is carried out through the bow ramp, directly to the shore or at a distance from it.

Eight modern Type 071 UDCs were also built and commissioned into the Navy. With a displacement of 25 thousand tons, they are capable of transporting up to 800 soldiers, up to 20 armored vehicles, 4 helicopters and 2 air-cushion landing boats. Unlike the "Type 072", the newer "071" are capable of carrying out a full-fledged over-the-horizon landing, providing greater security for the landing force. 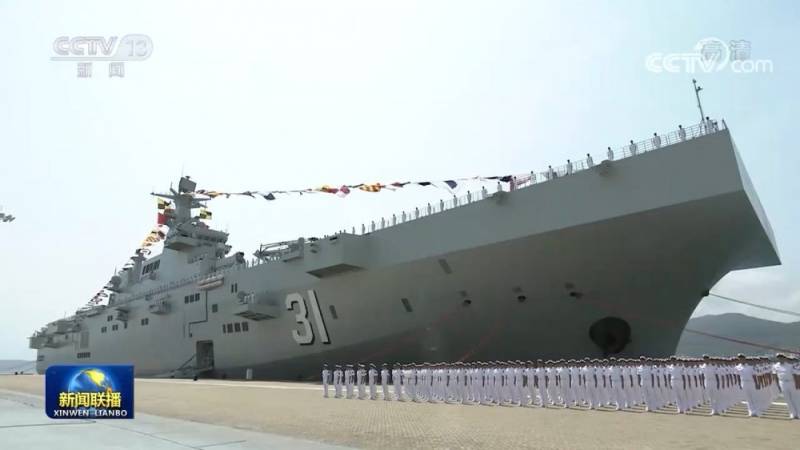 The head UDC / DVKD of the new project 075 adopted by the Navy is larger and heavier than the existing amphibious assault ships, and is also capable of carrying a larger number of aviation and land or amphibious vehicles. It has obvious advantages over other combat units and should seriously strengthen the amphibious fleet and expand its capabilities for over-the-horizon operations.

However, while the PLA Navy has only one new UDC, and this does not allow getting all the possible advantages. However, in the coming years, the next two ships will be handed over to the fleet, which will noticeably affect the landing forces. In addition, it is possible to continue the series - with clear quantitative and qualitative results.

The successful completion of the construction of the head UDC pr. 075 demonstrates the growth of the potential of the Chinese shipbuilding industry. So, "Hainan" is now the third in displacement ship in the Chinese Navy, second only to two aircraft carriers. Earlier, the top three were rounded out by the landing ships of the previous project 071. This shows that the industry is mastering a fairly massive and rapid construction of ever larger ships. Right now, these opportunities are being used to develop amphibious forces, and in the future they can be used in other areas.

Thus, the recent ceremony of admitting new units to the fleet was indeed an important event in modern stories The PLA Navy, and not only because of the simultaneous delivery of several ships. In the current doctrine of the construction and use of the Chinese Navy, amphibious forces receive a special place - and the new "Hainan" will make it possible to more effectively implement such plans.