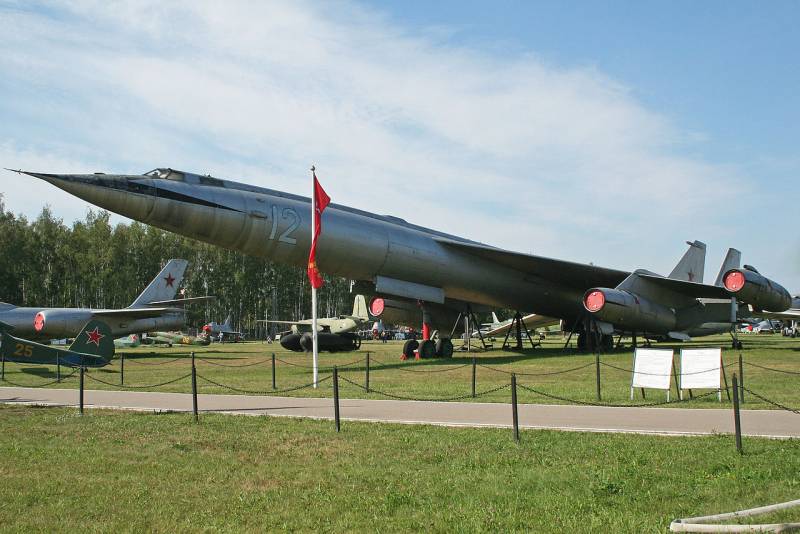 In 1951, a new experimental design bureau was formed at the aircraft plant No. 23 in Fili, the head of which was V.M. Myasishchev. Already in 1953, the new OKB-23 took off its first development - the long-range strategic bomber M-4, and in 1956 the first flight of the next 3M took place. The Bureau continued work on the topic of long-term aviation, but new projects could not be brought to a series. However, they have enabled the development, testing and implementation of a range of critical solutions and technologies.

Since 1954, OKB-23 has been working on the appearance of a promising supersonic bomber. As part of research work, the optimal appearance of such an aircraft was determined, which was later named the M-50. For the first time in domestic practice, it was necessary to create an aircraft with a takeoff weight of approx. 200 tons and a flight speed of up to 2000 km / h. To solve such problems, new engineering solutions and technologies were required.

During the construction of the airframe, it was proposed to use materials and technologies already mastered by the aviation industry, but innovations were also proposed. So, for the first time in domestic practice, large-sized sheathing panels were used, made by drawing with subsequent milling. The use of this technology made it possible to reduce the weight of the structure - and partially compensate for its growth due to other problems. 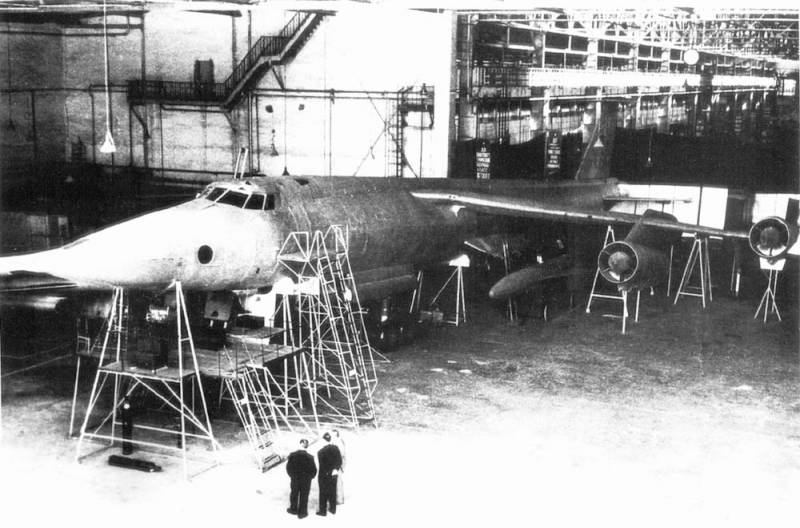 Experienced M-52 in the process of assembly. Photo Testpilot.ru
Realizing the complexity of piloting a heavy machine at supersonic speeds, the authors of the project decided to unload the pilots as much as possible. Part of the tasks for monitoring the aircraft systems were transferred to specially developed automation. Due to this, the crew could focus on piloting and performing a combat mission. At the same time, the number of the crew was reduced to only two people - less than that of any other domestic long-range bomber.

Among other things, the automation was responsible for the longitudinal balancing of the aircraft. At supersonic speed, the center of aerodynamic pressure shifted to the tail and found itself behind the center of gravity, which led to the appearance of a diving moment. This problem was solved by moving the center of gravity by automatically pumping fuel between different groups of tanks. Subsequently, this solution was used in a number of other projects.

An experienced M-50A bomber made its first flight in October 1959. Tests continued until mid-1961, and during this time they managed to carry out less than two dozen flights, incl. as part of the air parade. Then work on the project stopped due to a number of difficulties. So, the project turned out to be too complicated, and the prototype aircraft did not show all the desired characteristics and was not reliable enough. In addition, fundamental decisions were made to restructure the strategic nuclear forces with a reduction in the role of long-range aviation in favor of ballistic missiles. In such conditions, further development of the M-50 did not make sense. Nevertheless, the technologies of this project remained in the aviation industry and were used.

An early version of the M-56 project with under-wing engines. Photo Aviadejavu.ru

In parallel with the M-50, several new projects of military and civilian equipment were being worked out. Some of them were based on an existing project, while others were created from scratch. None of them even reached the test - but all left one or another design and technological groundwork.

The M-50 bomber was developed directly on the basis of the M-52. It was distinguished by the composition and layout of the power plant, the design of the tail unit, the presence of a refueling system in the air, and a number of other features. By the middle of 1961, they even managed to build an experimental aircraft, but due to the stoppage of the basic project, the only M-52 was not tested. Soon it was taken apart.

Another option for the development of the M-50 was the M-54 project. It studied and worked out various changes in the aerodynamic appearance, aimed at improving flight characteristics. The M-54 project made it possible to collect scientific data, but OKB-23 did not have time to use them in their work.

Unusual ideas were implemented in the M-70 bomber project. This modification of the base M-50 received a fuselage-boat and engine nacelles above the wing. As conceived by the designers, such an aircraft could land on water anywhere in the oceans, take fuel from the refueling submarine and rise again into the air. Due to this, it was possible to increase the duration of the watch by several times.

The final version of the M-56 with a common engine nacelle. Graphics Testpilot.ru
The project of the M-56 bomber is of great interest. This aircraft was distinguished by the presence of a front tail and the absence of a tail stabilizer. During subsonic flight, the front planes moved freely in the flow, while in supersonic flight it was proposed to fix them in a given position. Due to this, the necessary longitudinal balancing was provided and the need for pumping fuel was eliminated. The M-56 aircraft could have a take-off weight of approx. 250 t, develop a speed of at least 2,5M and show a range of 10 thousand km.

On the basis of the M-56, three versions of the M-55 supersonic passenger aircraft were worked out. The M-55A modification received two engines and could carry 40 people, and the four-engine M-55B liner was intended for 85 people. The M-55V version with six engines received 120 seats. The dimensions and weight of the three aircraft variants varied significantly.

In the mid-fifties, OKB-23 took up the topic of aircraft with a nuclear propulsion system. The first development of this kind was the M-60 project. Initially, it provided for a limited restructuring of the existing M-50 bomber with the introduction of "special engines" from the A.M. Cradle. However, a number of specific requirements related to the use of atomic energy led to the abandonment of this idea and to the development of a completely new aircraft with a different look.

Model of the long-range seaplane M-70. Photo Testpilot.ru
According to the project, the M-60 was to be built according to the midplane scheme with a trapezoidal wing and T-shaped tail. The power plant included four nuclear turbojet engines located in the tail, at the maximum distance from the cockpit. Engines with a built-in core and having different layouts were considered. With a thrust of more than 22 thousand kgf, they could provide a supersonic flight speed.

In the bow, it was proposed to place a crew capsule with powerful biological protection. According to calculations, it weighed 66 tons, the takeoff weight of the aircraft was 250 tons. To protect it from radiation, the capsule cockpit was deprived of glazing and other "weak points". It was proposed to develop television and radar systems for review, new means of life support, etc. An automatic control system was created, capable of controlling the operation of the units and performing the flight. Even the possibility of abandoning the crew and transferring all tasks to automation was considered.

The M-60 project turned out to be overly complex, and its main problems were associated with the proposed power plant. Therefore, in 1958-59. work began on another atomic bomber. The M-30 product was supposed to receive engines from the OKB N.K. Kuznetsov with different characteristics. In addition, the accumulated development experience was used in the M-30. 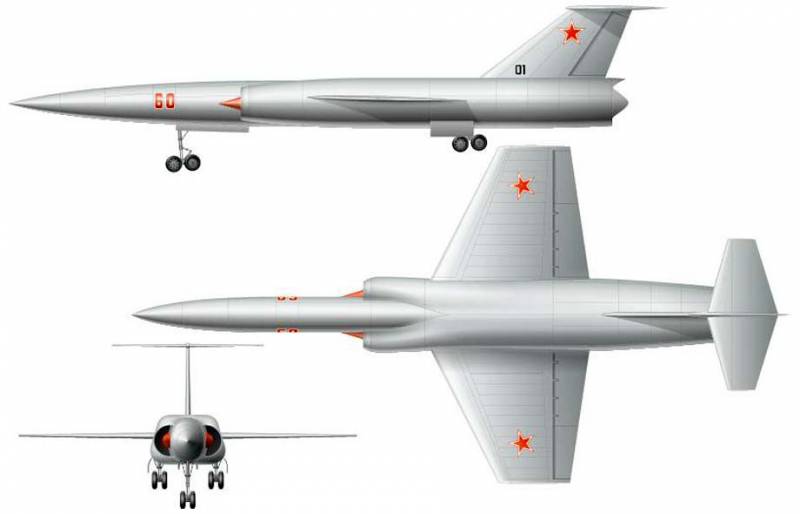 M-60 aircraft with nuclear engines in the tail. Graphics Testpilot.ru
The new bomber was built according to the "duck" scheme with two keels. Six nuclear turbojet engines were placed in the rear of the vehicle, in a wide nacelle. A common reactor was placed in front of them, which gave out thermal energy. A more advanced design of the power plant made it possible to simplify and facilitate the protection of the reactor and the crew. Thanks to this, the usual glazing was returned and some of the viewing facilities were abandoned.

The M-30 aircraft was smaller and lighter than its predecessor. With a takeoff weight of 170 tons, it carried 38 tons of reactor and cockpit protection, and could also take on board up to 25 tons of payload. Supersonic speed and practically unlimited flight range were provided.

Work on the M-30 continued until 1960, after which it was curtailed. The reason for this was the excessive complexity, cost and danger of promising technology. The expected performance gains did not compensate for these shortcomings. In addition, there was a more profitable alternative in the form of actively developing ballistic missiles.

In October 1960, OKB-23 was transferred to the rocket and space industry and became a branch of OKB-52 V.N. Chelomeya. In the future, other transformations took place, but space remained the main sphere of activity of the bureau. However, several new aircraft were developed for various purposes - but not bombers. 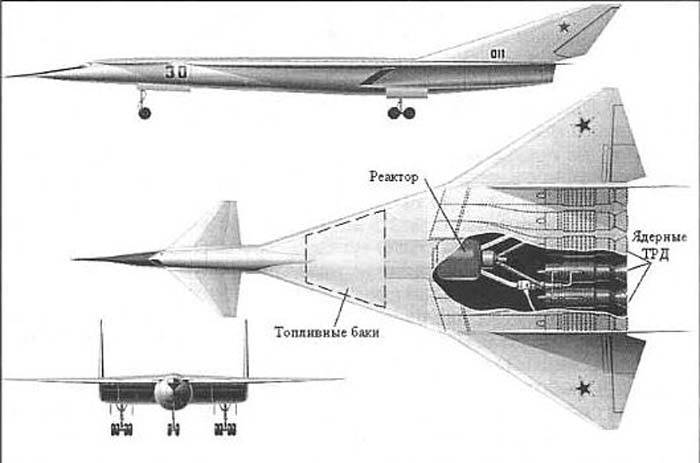 Project M-30. Graphics Aviadejavu.ru
For its short history OKB-23, as an independent organization, created a number of various bombers, but only two of them went into series and entered service - a total of more than 120 units. One more plane was brought to the test, and the second was taken apart before the first flight. Other developments remained on paper. All these processes have made a significant contribution to the development of the Air Force, but against the background of the successes of other design bureaus they look quite modest.

However, even unsuccessful projects allowed gaining valuable experience, testing new bold ideas and developing a variety of equipment and technologies. Despite the re-profiling of OKB-23, scientific data and technologies from its projects were subsequently actively used to create new aviation and aerospace technology.

We have found application of know-how in automation and control systems, an original way of balancing, etc. Decisions on nuclear aircraft were mainly sent to the archive in connection with the closure of the direction, the futility of which was also determined by the results of research and design. Perhaps some of the ideas in the field of nuclear engines are being reused in modern projects.

Thus, OKB-23 V.M. During several years of its existence as an aircraft building organization, Myasishcheva managed to significantly influence the development of long-range aviation, as well as create a significant technological reserve for future projects. Probably, this was the main result of the bureau's work.