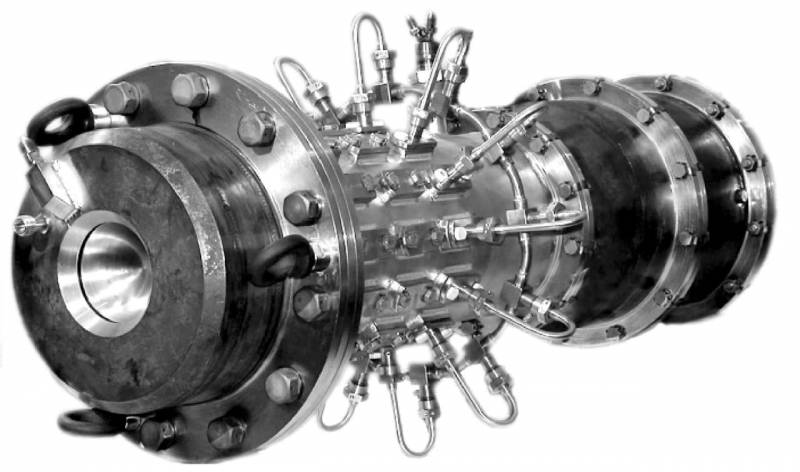 In order to create a technological reserve for further development aviation, rocket technology and astronautics in our country, several promising projects are being developed, incl. a fundamentally new engine. Recently, it was announced that tests of a ramjet pulsating detonation engine were completed. So far, only the technology demonstrator has been tested at the stand, but even it shows a significant increase in the main characteristics.

On April 9, the press service of the UEC-UMPO enterprise (part of the United Engine Corporation and Rostec) reported on the latest successes in the field of engine building. OKB im. A.M. The cradles from the UEC-UMPO have successfully carried out the first stage of testing the demonstrator of the new engine.

The direct-flow pulsating detonation engine (PPDD) with a block of gas-dynamic resonators in the demonstrator version confirmed the possibility of obtaining high technical characteristics. The thrust of the product reached 1600 kg. In some modes, the engine showed an increase in specific thrust up to 50% relative to products of other existing schemes. The specific fuel consumption was reduced accordingly.

The use of engines with such characteristics will significantly increase the basic parameters and capabilities of aircraft. The maximum range and payload can be increased by 1,3-1,5 times. An increase in thrust-to-weight ratio will also improve maneuverability and flight dynamics.

It should be noted that the development of a domestic ramjet detonation engine began a long time ago. The first reports about this project, developed at the OKB im. The cradles appeared back in 2011. Already in 2013, one of the first experimental engines was tested. He created a thrust of only 100 kg, but showed a sharp increase in efficiency and other parameters.

In the future, the design was improved and increased in size, with a simultaneous increase in key characteristics. To date, the demonstrator engine has a thrust of 1600 kg - 16 times more than the very first prototype. It is expected that the current project will be developed, and thanks to this, an even more powerful engine will appear.

The concept of the RPME or pulse detonation engine (PDE) has been actively developed in different countries over the past several decades. In the conditions of laboratories and test benches, quite interesting results have already been obtained, but not a single engine of a new class has yet reached implementation in practice.

To date, several basic designs of the IDD have been developed and tested. The simplest one involves the creation of a product that includes an air intake device, the so-called. traction wall and detonation tube-chamber. When the air-fuel mixture burns, a detonation wave is formed, hitting the traction wall and creating thrust. On the basis of such devices, multitube engines can be created.

More complex, but effective is the PDD with a high-frequency resonator. Its design is distinguished by the presence of a reactor and a resonator. The reactor is a special device that provides a more complete combustion of the air-fuel mixture. The resonator allows for more efficient use of the energy of detonation waves. Such an engine can be used as a stand-alone product or as a more efficient replacement for the "traditional" afterburner of a turbojet engine.

OKB im. Cradle develops and tests precisely the circuit with a block of gas-dynamic resonators. Its high potential has been repeatedly confirmed by tests of various prototypes, and now another similar product is being tested.

RPM and IDD of all schemes have certain advantages over gas turbine ones. First of all, it is less complex design. In IDD there are no moving parts difficult to manufacture, experiencing high mechanical and thermal loads. In addition, such an engine has lower requirements for the parameters of the flow path. Thanks to this, the detonation engine can be made using existing technologies and materials. 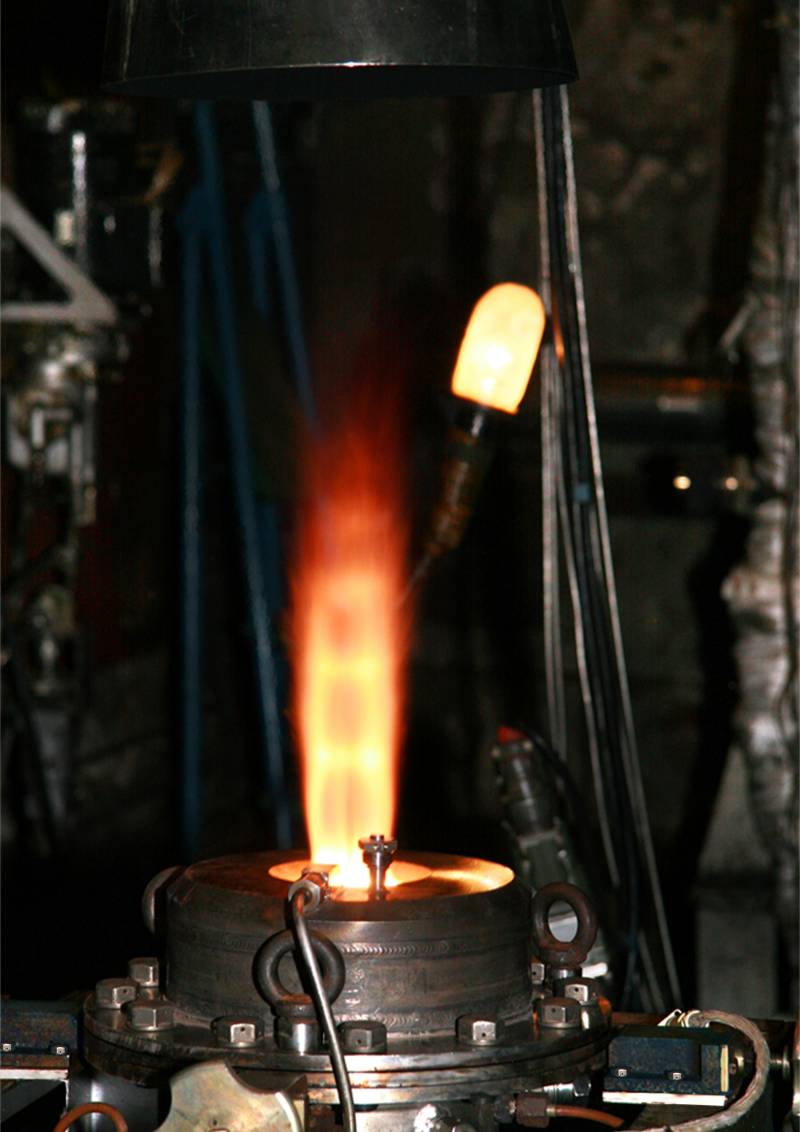 Due to a different thermodynamic cycle, specific fuel consumption is reduced, which can be used to improve certain characteristics of the aircraft. Depending on the tasks set, you can abandon the economy in favor of increasing thrust or keep it by increasing the flight range.

The organization-developer of the new technology demonstrator believes that the engines of the new class can be widely used in various fields. Traffic rules will be useful in the further development of aviation, incl. super- and hypersonic; they can be used in new aerospace systems. The new engine is seen as a useful addition to rocket and jet propulsion systems.

RPMEs have design and technological advantages over gas turbine products with the same parameters. According to the OKB them. A.M. Carrycots, this is also a commercial and economic advantage. An aircraft with such an engine will have high technical characteristics, but the cost of development, production and operation will remain at an acceptable level.

At the same time, the proposed designs of IDD are not without drawbacks. So, like other ramjet engines, detonation has a limited range of operating speeds. To start, he needs an initial acceleration - with the help of a different engine. In the case of missiles, this can be a liquid or solid propellant propulsion system, and the aircraft can have a separate turbojet engine for takeoff and landing and acceleration modes.

Due to technical and operational constraints, the direction of ramjet pulsating motors has been underdeveloped in the past. As a result, new IDD projects are still at the development and testing stage. There are still no full-fledged high-performance samples suitable for implementation in real projects of aviation or space technology.

For their appearance, further continuation of work is necessary with a gradual solution of all key tasks. An increase in thrust is required to reach the level of modern turbojet engines, an increase in the resource and the achievement of high reliability. Work of this kind is going on right now and is already yielding certain results. But the creation of a full-fledged IDD / PDAA for practical use is still a matter of the distant future.

Work for the future

The direct-flow pulsating detonation engine has a number of important features and is of great interest in the context of the further development of aviation, rocket and space technology. However, the development of this direction and the development of workable structures with a sufficient level of characteristics turns out to be a very difficult and time-consuming process. So, over the past 10 years, domestic traffic regulations developed by "UEC-UMPO" have shown a significant increase in performance, but still have not reached implementation in practice.

Nevertheless, the work continues and gives cause for optimism. The last news show significant progress, and also allow us to expect that the industry will boast of new successes in the near future. Thus, the appearance of aircraft with pulsating detonation engines is still an event of the middle or long-term prospects, but each new stage of development and testing brings it closer.