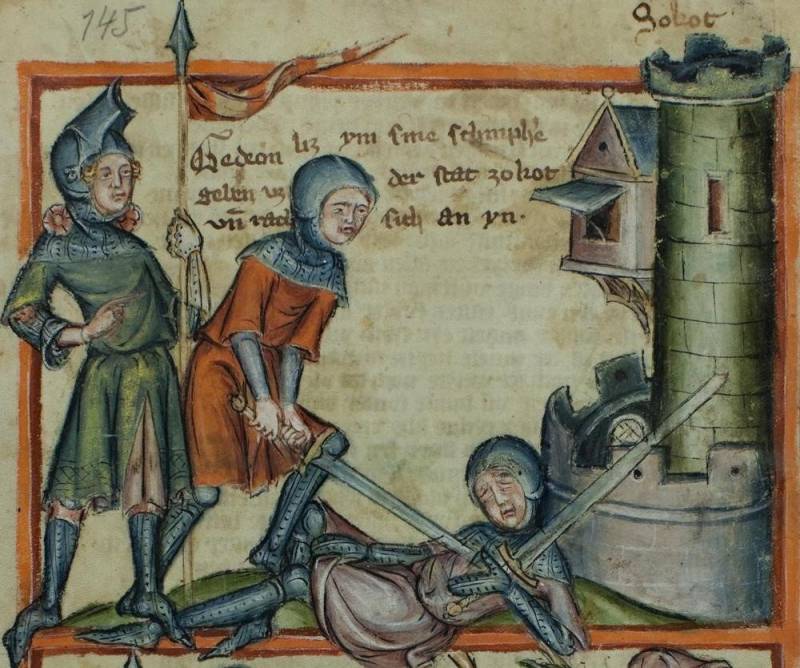 "... for all who took the sword will die by the sword ..."
(Matthew 26: 52)
Weapon from museums. In the previous article, we were talking about exactly how the two-handed swords of the Middle Ages differ from the two-handed swords of the Renaissance. And it is obvious that the differences lie not only in the details of the form, but above all in their length, weight and application in battle. 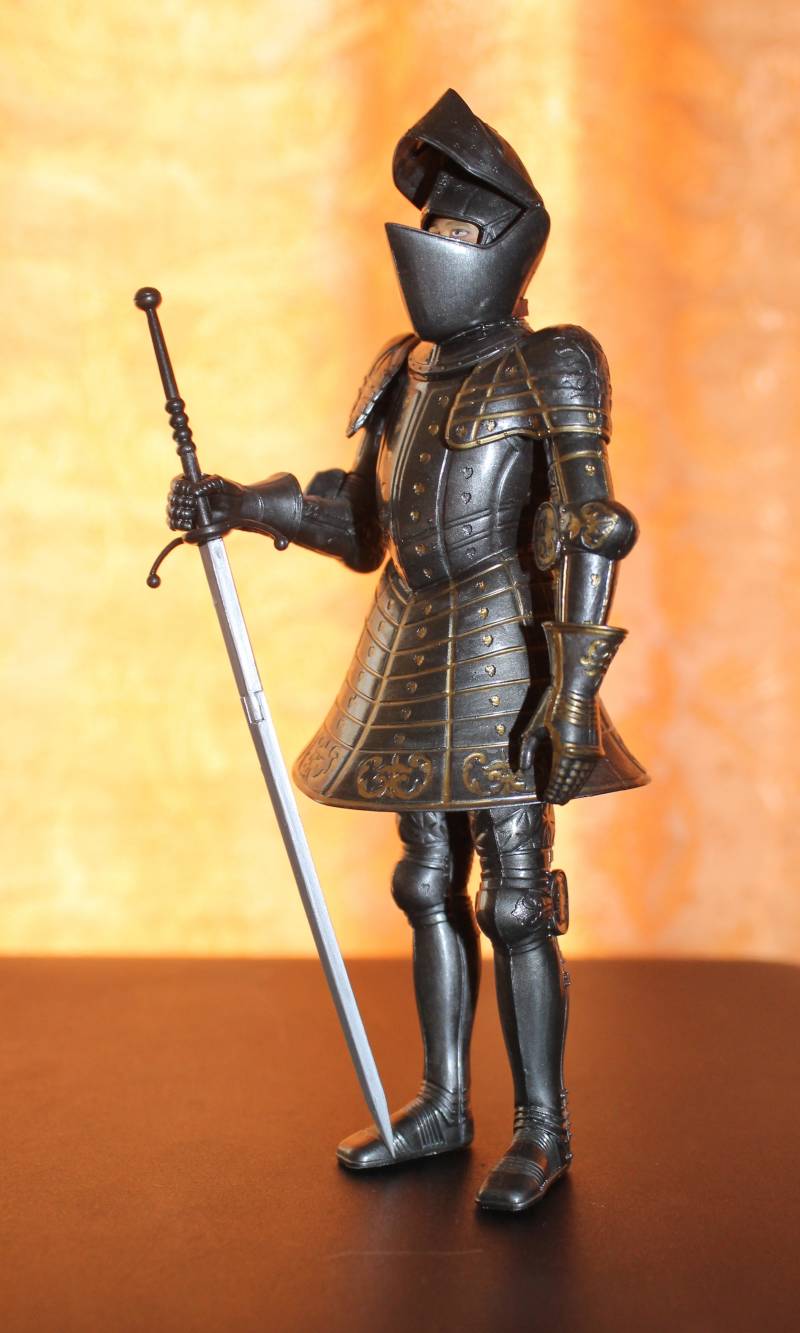 Knights, however, also used two-handed swords. But mostly in tournaments. Collectible quality polystyrene figurine of a knight in tournament armor of the Japanese firm "Imex" on a scale of 1:12. Photo by the author
The two-handed sword (bidenhender) has a total length of 160 to 180 centimeters. No scabbard was made for these swords; they were worn on the shoulder like a lance. The upper part of the blade, the one that directly adjoined the crosshair and the handle, was usually not sharpened, but covered with wood and leather. Therefore, the hand could freely grasp the blade, which at least slightly facilitated fencing with such a sword (or even made it possible). Very often on such blades, directly on the border between their sharpened and non-sharpened parts, additional parrying hooks are found. It is easy to guess that such a Renaissance two-handed sword could not be used in the same way as a medieval battle sword. If in general it was still somehow used in battle, then it was done by foot soldiers, who, with the help of such swords, tried to punch gaps in the line of the enemy's peak. Since these were, in a certain sense, suicide teams, and only very strong warriors could properly handle a two-handed sword, they received a double salary, for which they were also called "double mercenaries."

Two identical two-handed swords [1, 3] more than 2 meters long served as weapons in the fencing school. But the sword [2] with leather guards, weighing 8,25 kg (here, at last we got a sword in 8 kg!), Most likely, was a military weapon, otherwise why did he need a leather guard? The ceremonial sword could be decorated with something more beautiful, but for the training one it is too heavy. The medallions on the top of its handle are nothing more than a tribute to Juan of Austria (1547-1578), who commanded fleet Of the Holy League during the victorious battle over the Ottomans at the Battle of Lepanto on October 7, 1571. The tops of the hilts of these swords are very characteristic: for example, the "decanter cork" on these thrusting swords and the octagonal pommel with a medallion in the center on the cutting sword. That is, before us are typical finials of the XNUMXth century. Armory of Dresden. Photo by the author
During the 2th century, two-handed swords were less and less used in combat and increasingly became ceremonial weapons. For example, they were armed with honor guards, because these powerful swords made a strong impression. The two-handed sword became a ceremonial sword, which was carried out by holding it in front of oneself. The swords became longer (often reaching XNUMX meters) and were decorated more and more magnificently and carefully.

The arches of the cross of such swords were most often playfully bent and decorated, and the pommel (see the middle sword) sometimes took the most amazing shape. Well, the blades of intimidation were sharpened in waves for the sake of (the so-called flamberg sword). Armory of Dresden. Photo by the author
The record for size belongs to ceremonial swords worn by the guards of Prince Edward of Wales during his time as Earl of Chester (1475-1483). These swords reached 2,26 meters. Needless to say, such huge swords no longer had any practical value, but should have symbolized the power of this suzerain.

It is clear that already at the very beginning of the appearance of such swords, attempts were made to further increase their striking power. And ... that's how flamberg-type swords arose. It was believed that a blow with such a sword - whether stabbing or cutting, inflicts a more severe wound, because it "breaks apart" it like a saw. Naturally, such conversations also caused greater fear, so the appearance of a warrior with such a sword had a strong psychological effect on the enemy. The owners of flambergs began to be condemned as notorious villains. Like, everyone:

"Wearer of a blade, like a wave, should be put to death without trial or investigation." 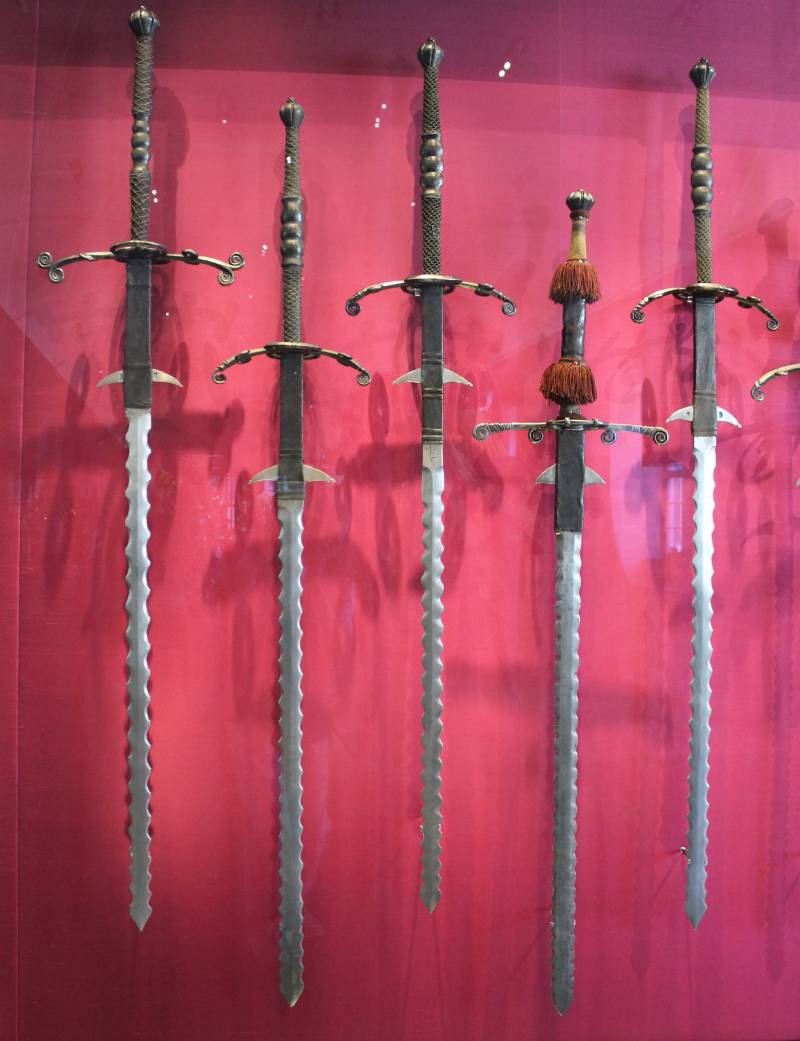 Check out these impressive two-handed swords ranging in length from 180 to 210 cm and weighing from 4 to 4,8 kg, which date from the reign of the Elector Augustus of Saxony. They were part of a group of 99 such swords, which were donated to the Armory from the Royal Saxon Arsenal in Dresden in 1833. The Bidenhanders displayed in this display case are the clear weapons of the Landsknechts. The elongated ricassos, covered in leather, could be used as an additional handle. Without a doubt, the handling of these weapons demanded excellent physical fitness and considerable courage from the Landsknechts. Armory of Dresden. Photo by the author
However, it should be noted here that when hitting with a two-handed sword on armor, there is not much difference what kind of blade he has. And in the same way, there is not much difference when the blow falls on a living body. Or let's put it this way: there may be a difference, but it is not so great to justify the technological difficulties of manufacturing and, consequently, the high cost of such blades. After all, forging a flamberg was more difficult than an ordinary sword, and it required more metal, which means it was heavier. In fact, it acquired the function of not a blade, but a polearm, and there everything depends not on the shape of the blade, but on the weight and length of the handle! 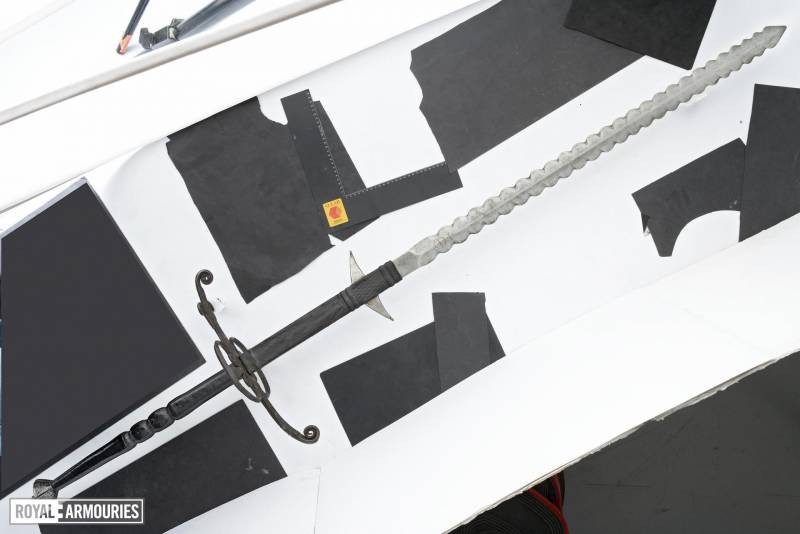 Flamberg sword, 1571-1599 Sword length 1684 mm, blade length 1225 mm, weight 5528 g. Royal Arsenal, Leeds
Each bend of the blade created a zone of increased metal stresses, so it was easier for a flamberg to break than a "two-handed" with a straight blade. One could have acted differently: forge a straight blade and simply sharpen its blades "under the wave." But again, it was a very time consuming task, given the length of the blade and the number of indentations and protrusions on it.

English bayonet bayonet, 1600-1699 Royal Arsenal, Leeds
In any case, it was a heavier and more expensive weapon, and if heavier, then ... and more effective when hitting, no matter how sharpened his blade. And it was not for nothing that flambergs, in general, did not become a mass weapon. How did the eastern sabers with wavy and serrated blades not become a mass weapon! Wavy bayonets did not become widespread, although they could have been produced in machine production without any problems. It is possible, but did not ... They considered that "the game is not worth the candle!" 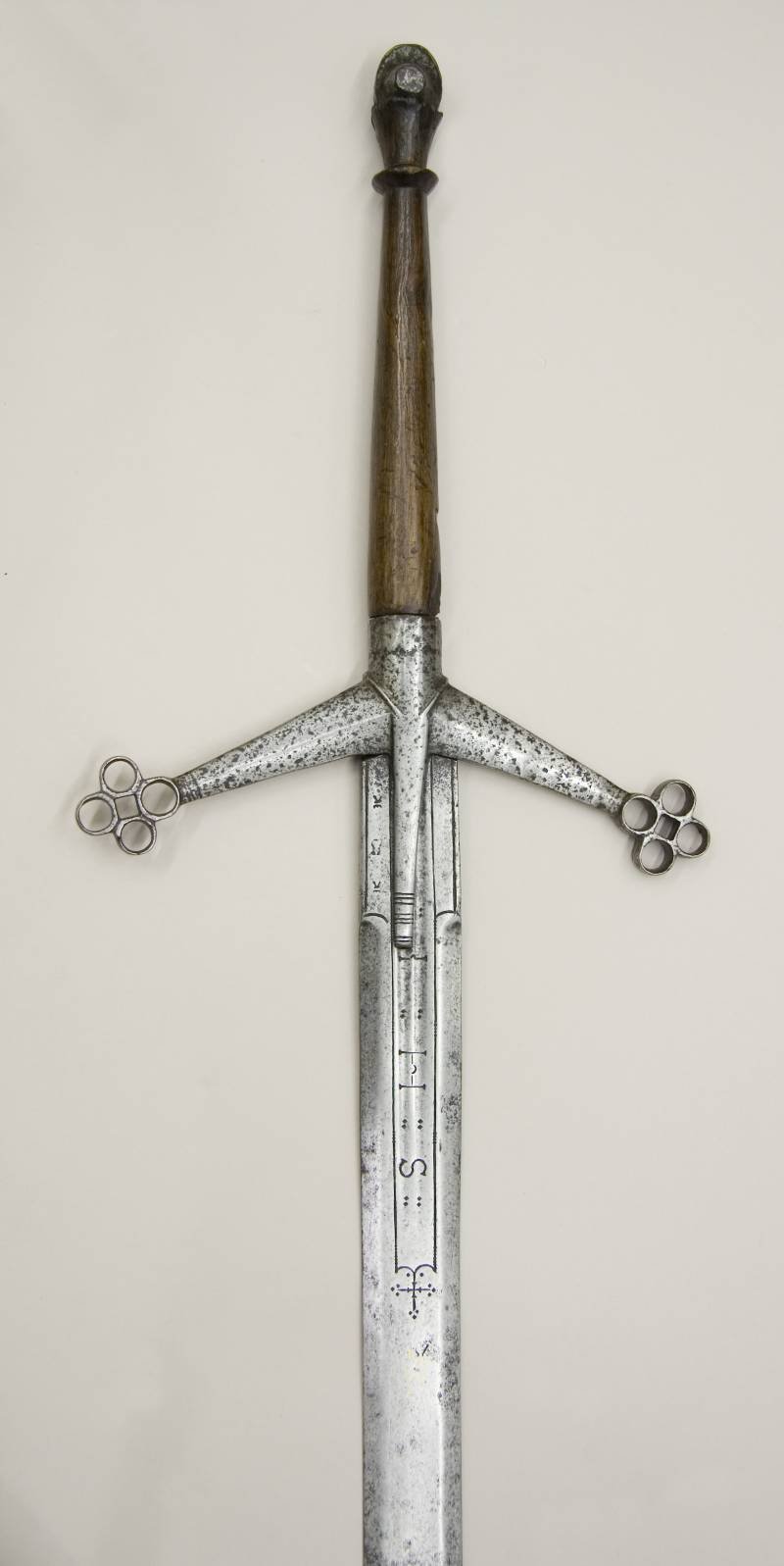 Scottish claymore from the collection of the Metropolitan Museum of Art in New York. Handle close-up
Perhaps, the Scottish Highlanders used two-handed swords in battle for the longest time. What is known about him? That the two-handed claymore was a "great sword" used in Scotland during the late Middle Ages and early modern times from about 1400 to 1700. The last known battle in which the claymores are believed to have been used in large numbers was the Battle of Killikranky in 1689. This sword was somewhat longer than other two-handed swords of that era. In addition, Scottish swords were distinguished by a crosshair with straight crosses inclined forward, ending in a quatrefoil. 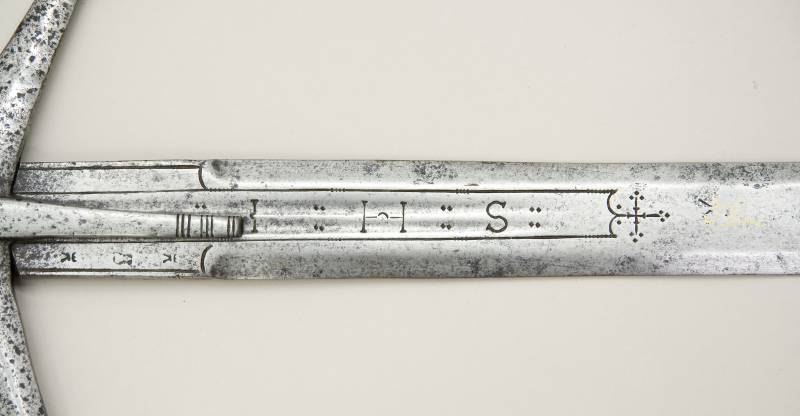 The blade of this claymore was made in Solingen ... Metropolitan Museum of Art, New York
The average claymore had a total length of about 140 cm, with a handle of 33 cm, a blade of 107 cm and a weight of about 2,5 kg. For example, in 1772, Thomas Pennant described a sword seen on a visit to Raasai as:

“A bulky weapon two inches wide with a double-edged blade; blade length three feet seven inches; the handle is fourteen inches; flat weapon ... weight six and a half pounds. "
Largest claymore in stories, known as the "bloody killer", weighs 10 kilograms and is 2,24 meters long. It is believed to have been owned by a member of the Maxwell clan around the XNUMXth century. The sword is currently in the National War Museum in Edinburgh, Scotland.

Here is this claymore from the collection of the Metropolitan Museum in New York in "full growth". Made in the XVI-XVII centuries. in Solingen (blade), the handle is local, Scottish. Length 136 cm, blade length 103,5 cm, crosshair width 28,5 cm, weight 2068,5 g
However, such a "thing" as the inertia of thinking is a terrible thing - swords with wavy blades disappeared, but for some time rapiers with exactly the same blades appeared in Europe. They say that in a duel for the blade of an ordinary rapier, you can grab a hand in a thick glove, hold it, and in the meantime, slaughter your opponent. Whereas it is impossible to grab such a blade even with a glove. Moreover, such a sword does not get stuck in chain mail and ... in bones. But again, all these "magical properties" of such a blade were most likely clearly exaggerated. 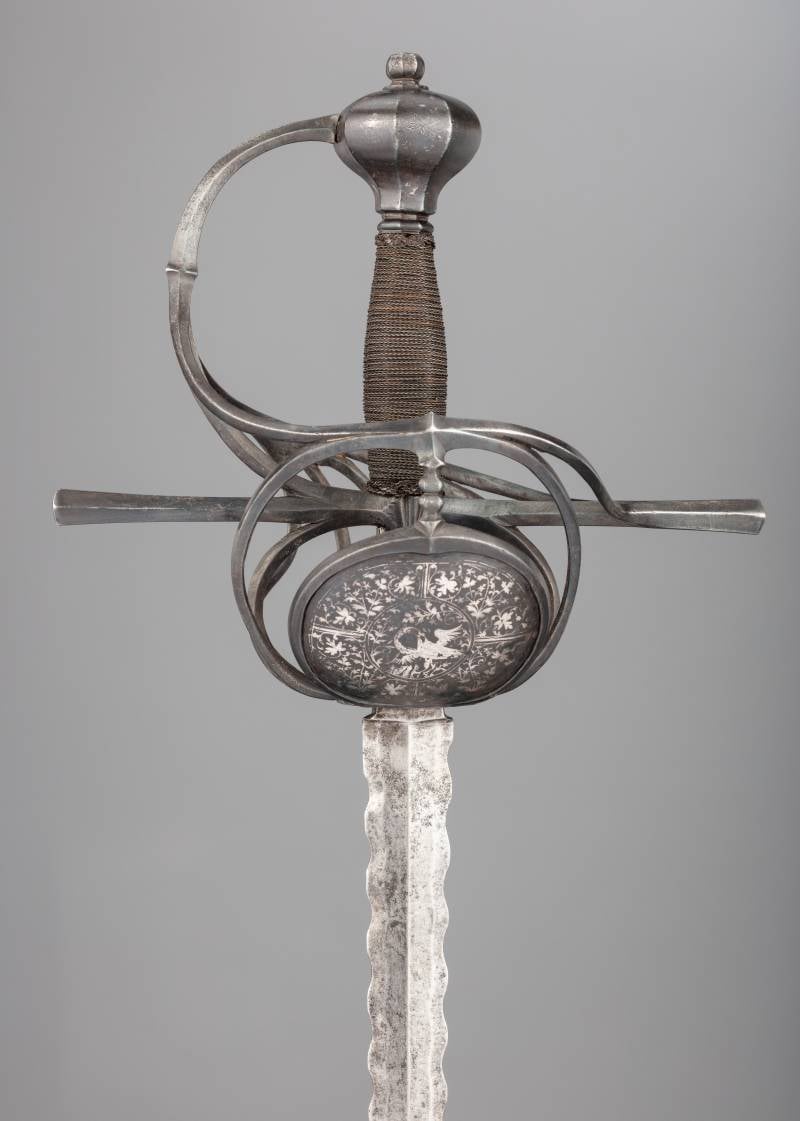 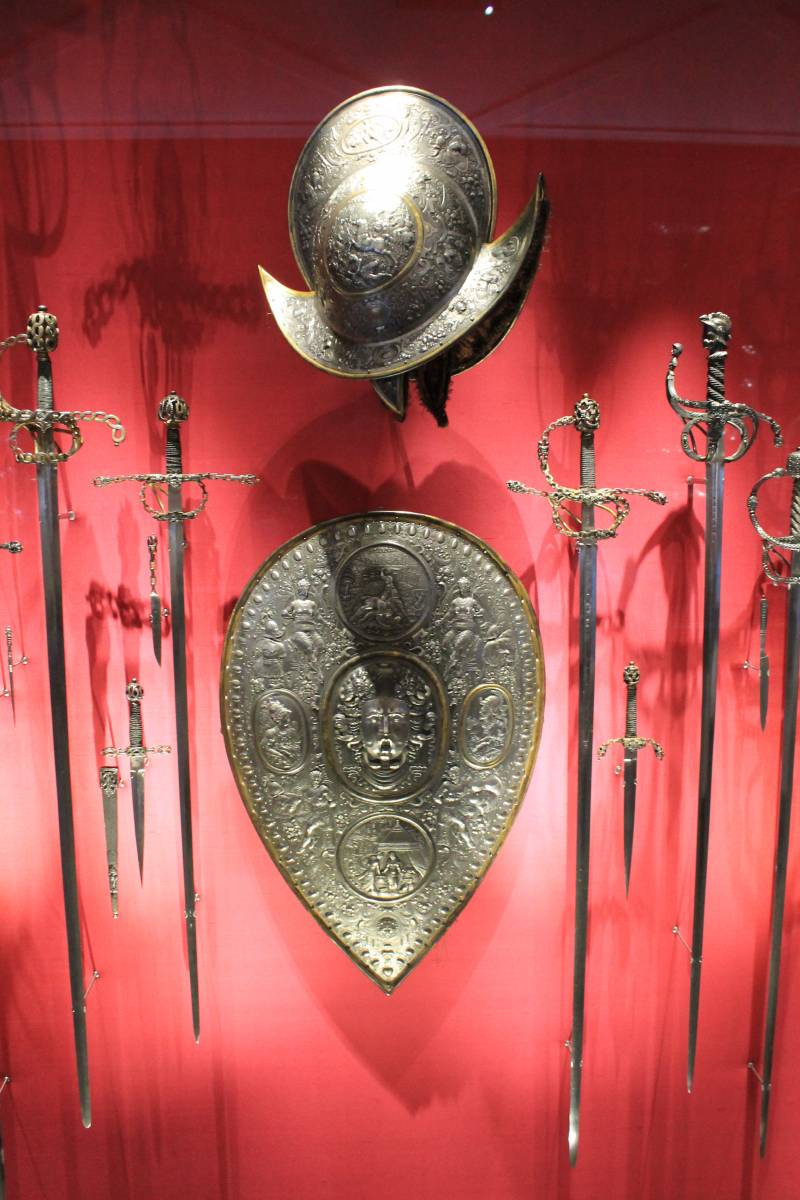 Still, there were many more swords with an even, smooth blade. Well, let's say - these are ... These so-called "heavy swords" and parrying daggers are characteristic of the Italian school of fencing. Armory of Dresden. Photo by the author 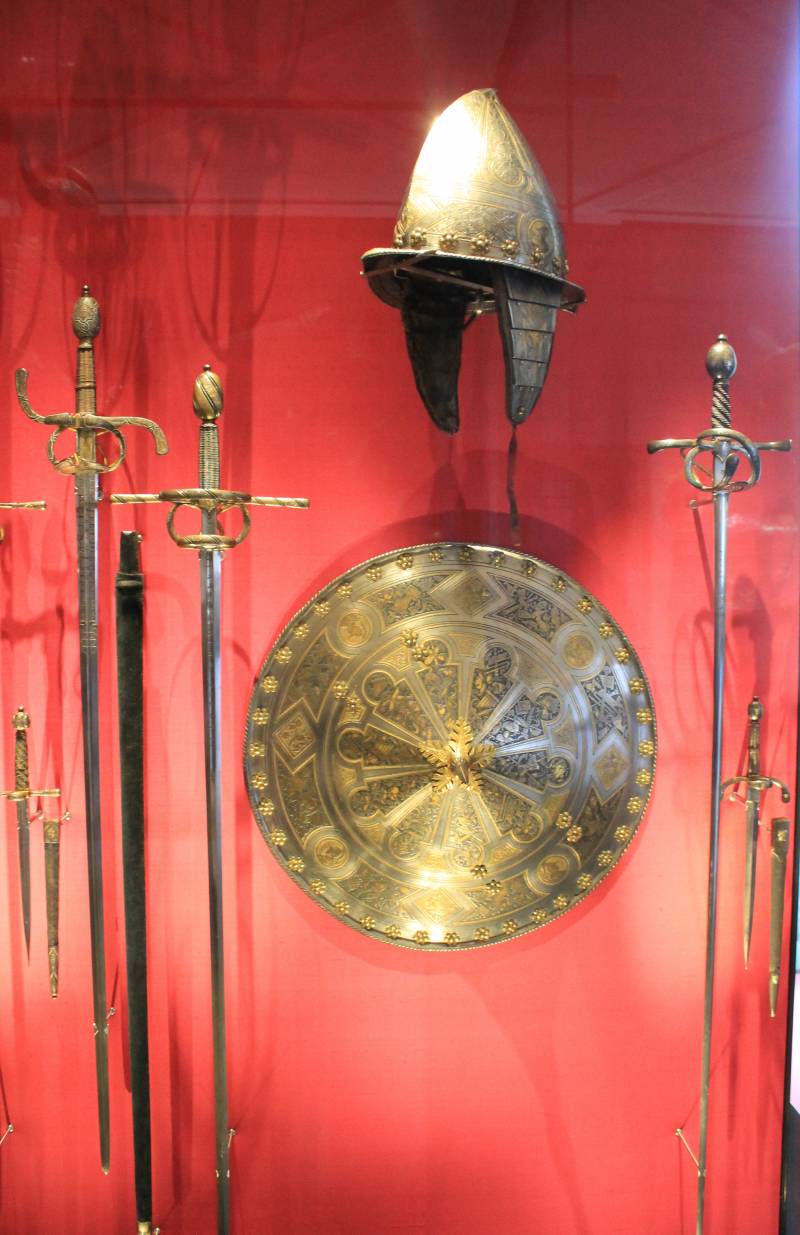 And such! As for helmets and shields, they most likely served as attributes of the court guards and were least of all intended for battle. Armory of Dresden. Photo by the author

Sword. Unknown master. Italy, about 1540-1550 Length: 112,4 cm. Blade length: 98,8 cm. Blade width: 2,8 cm, blade at the top - ricasso. Guard width: 17,6 cm, protection. The handle has a pear-shaped pommel, the handle is wrapped in twisted wire. Crosshair: straight square bar, thickened at the ends; side rings and other parts are all square. Hexagonal blade, double-edged, with ricasso. Refers to the transitional type of sword, which is found in both civilian and military portraits of that time. Swords of this type in combination with a buckler or dagger were used by swordsmen of the Bologna school of fencing of Marozzo, which, although it included new innovations such as the parrying dagger, in its essence followed the old medieval martial tradition, including fencing with two-handed swords. The simple yet elegant hilt decoration seems to follow the civil fashion of the time and is most typical of weapons dating from about 1530-1550. Metropolitan Museum of Art, New York

But how much is a sword, how much a sword - you can argue endlessly!