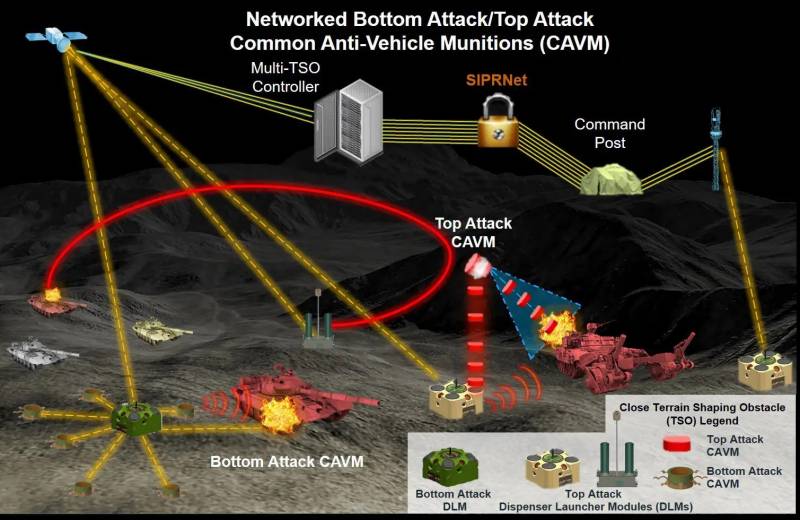 The US Army launches the development of a promising anti-tank / anti-vehicle mine. Like some existing products, this mine will be able to independently attack and hit targets tens of meters from its position. At the same time, it will be supplemented with modern management tools operating on a network principle, which will provide a number of new opportunities.

The Picatinny Arsenal begins development of the Common Anti-Vehicle Munition (CAVM) family of anti-tank and anti-vehicle mines. Within the framework of this project, it is planned to create a mine for attacking targets from above (Terrain Shaping Obstacle Top Attack or TSO-TA), ammunition to destroy the undercarriage and bottom, as well as communication and control systems to control minefields.

On April 1, Arsenal posted a request for proposals on the TSO-TA topic. The document indicates the general requirements for such weapons and the desired level of core performance. In the near future, it is planned to accept documents from potential developers and move to the design stage. The timing of the completion of development has not yet been specified.

According to the terms of reference, the TSO-TA mine will include a unified CAVM warhead and a Dispenser Launcher Module (DLM). Using unified control facilities, the mines will be connected via radio to the Remote Control Station (RCS). 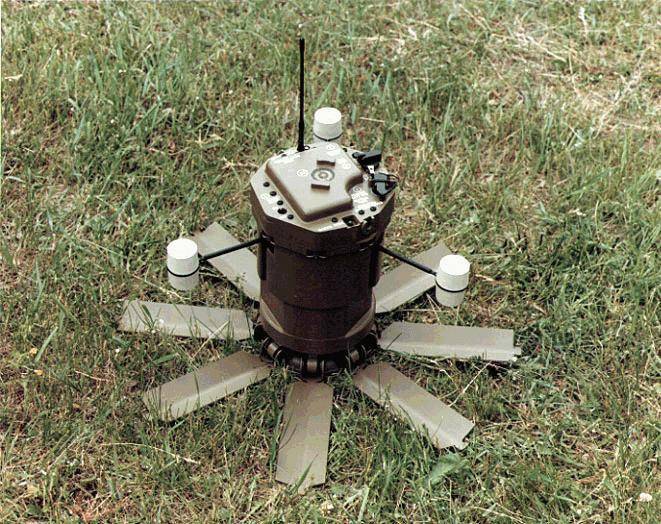 Serial mine M93 Hornet in combat position
The customer requires that the mine be able to be installed manually and mechanically. The product must be in standby mode for up to six months and in a firing position for up to 30 days. Each mine will control an area with a radius of 164 feet (50 m). The principle of operation of DLM and CAVM products is not specified, however, it is required that in terms of combat qualities they surpass the existing models of their class.

The RCS console must communicate with mines at a distance of up to 5 km and simultaneously monitor 12 minefields. Mines will report on their condition, the presence of targets in the area of ​​responsibility, etc. It should also be possible to temporarily disable the minefield.

The TSO-TA / CAVM anti-tank mine should not be inferior in characteristics to existing models - we are talking about the M93 Hornet and XM204 products with an original design and operating principle. The announced composition of the promising complex clearly indicates plans to borrow the architecture and principles of operation of these mines.

M93 Hornet Wide Area Munitions (WAM) mines were developed in the nineties and have been supplied to the troops since the early XNUMXs. The family includes unified mines with the possibility of manual or mechanized installation to destroy armored vehicles or unprotected vehicles. 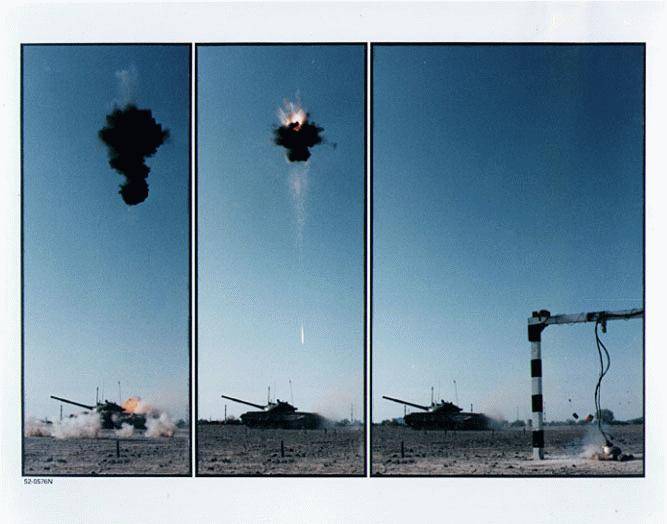 The combat element of the M93 mine strikes an armored object
The M93 product has a mass of up to 16 kg and is actually a launcher for firing a submunition. In a combat position, the mine uses seismic target sensors. When a large vehicle approaches at a distance of less than 100 m, infrared sensors are activated. By processing data from several sources, the control unit determines the range to the target and the direction to it. In parallel, the calculation of data for firing and guidance of the launcher is carried out by tilting to the desired angle and turning in the desired direction.

At the design moment, a combat element equipped with its own IR target sensor is fired. The element performs a simple maneuver and, once over the target, detonates the shaped charge. Formed impact core weighing 450 g hits the target from the upper hemisphere. The declared penetration is not less than 90 mm.

To date, a similar mine XM204 with higher characteristics has been developed. It is designed as a launcher for four submunitions and has more advanced electronics on a modern component base. However, the exact characteristics were not disclosed. The XM204 mine has already passed most of the necessary tests and will be put into service in the near future.

It is known that the M93 Hornet mine showed a number of shortcomings during testing and development. The set of target sensors did not always cope with target detection and accurate determination of range and direction. There were also problems with targeting a combat element and hitting a target. Nevertheless, the refinement of the design led to the desired results, and a combat-ready model entered service. In addition, the fundamental possibility of creating a land mine that would strike a tank from above was confirmed. 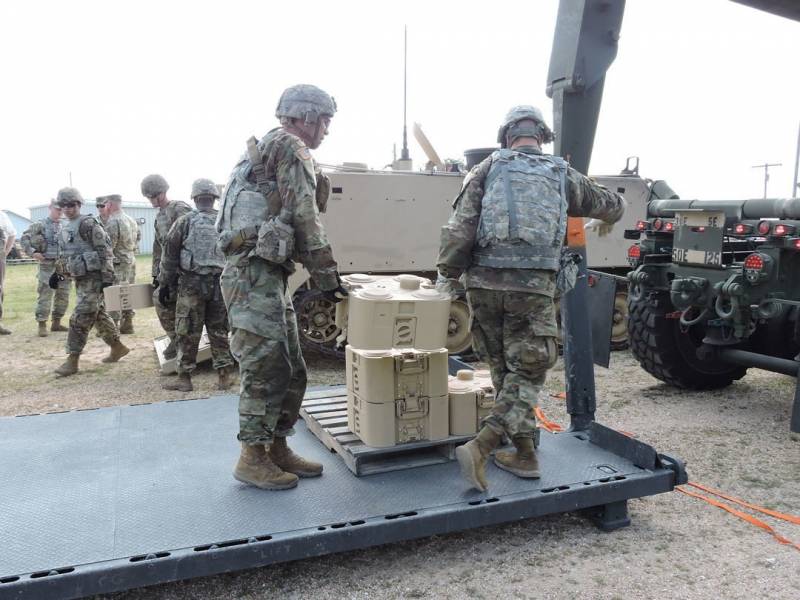 Mina XM204 on military trials, August 2020
In the TSO-TA project, it is proposed to use a new cumulative warhead CAVM with increased penetration characteristics. Probably, it is also planned to increase the probability of target detection and the accuracy of its destruction, which will give advantages over the M93 and XM204. In this case, in all cases, the principle of hitting a target from the upper hemisphere - to the weakest part of the reservation is implemented.

However, the most interesting in the new project are the proposed systems and control loops, which can radically change the combat qualities and potential of both individual mines and the barrage as a whole. Two-way communication between mines and the remote control, first of all, will simplify the installation of the field and its preparation for work. In addition, the operator will be able to monitor the condition of the fence and take the necessary measures. The compilation of mining maps will be greatly simplified.

A minefield based on TSO-TA / CAVM can be temporarily disabled, for example, for the passage of its troops - and activated when an enemy appears. Mines with remote target sensors and radio communication will be able to warn the operator about the approach of the enemy, incl. with an approximate definition of the direction, number and composition of his forces.

A single RCS console will be able to control a large number of minefields, as well as communicate with higher-level elements of the army's control loops. Thus, a minefield based on the new TSO-TA will be able to become a full-fledged participant in network-centric army structures with all the potential advantages. 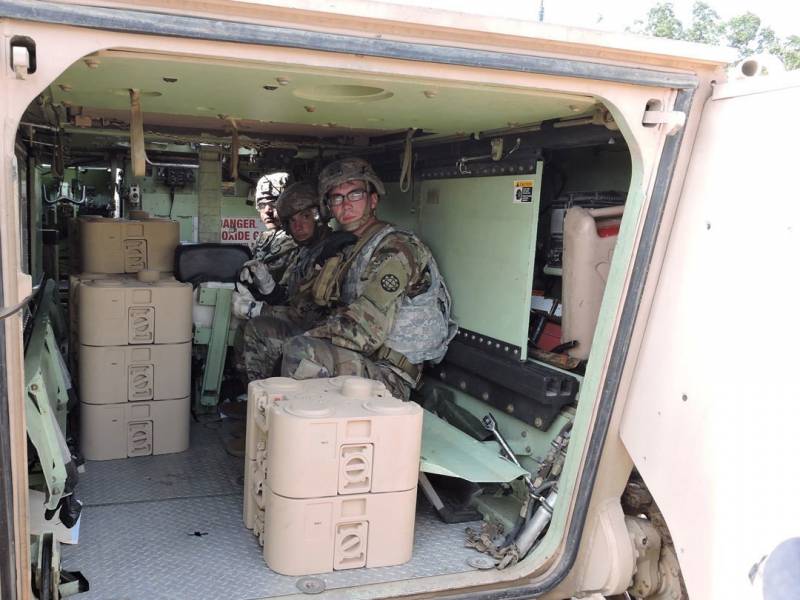 However, it is already clear that the new project may face serious problems and to some extent repeat the fate of the M93 and XM204. Their development turned out to be quite difficult, and the finished mines are expensive. The TSO-TA / CAVM product will receive additional controls, which complicates the project, increases the cost of the product and leads to new risks at all stages of the design.

At the start of work

At the moment, the program for the development of a new mine is at a very early stage. The Pentagon has identified the most general requirements for such a product and issued a request for proposals. Now potential developers will have to familiarize themselves with the requirements and form a possible appearance of the promising complex. Then the competitive part of the program will take place, the winner of which will continue to develop and in the future, perhaps even receive an order for the serial production of mines for the army.

It is not known which companies and organizations will offer their preliminary projects, and which of them will be chosen as winners. However, it is clear that this is one of the most interesting and promising projects of recent times. The advanced CAVM / TSO-TA mines being developed by the Picatinny Arsenal could seriously affect the capabilities of the US engineering forces. Of course, if the developers manage to overcome all difficulties and bring the project to the desired final.