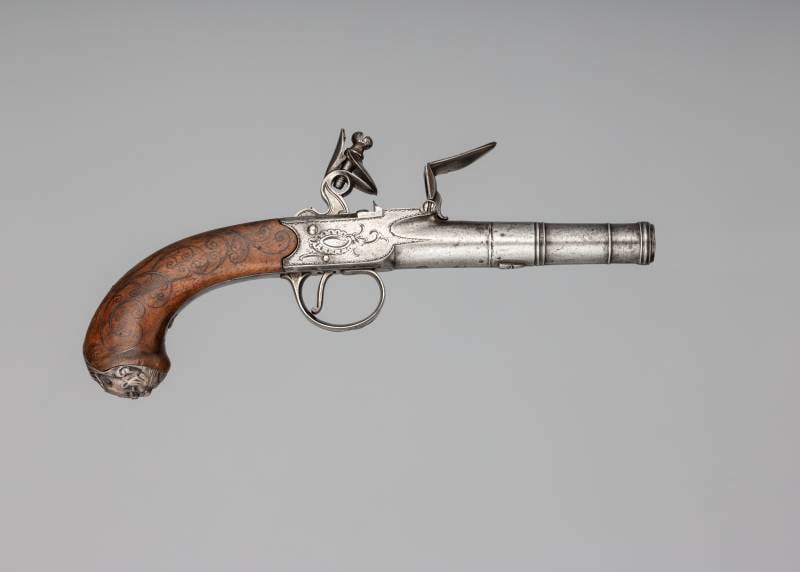 Flintlock pistol, approx. 1770-1780 Made by the gunsmith Ketland (London and Birmingham, before 1831), the silversmith who decorated it - Charles Fit. Materials: steel, wood (walnut), silver. Dimensions: length 21,3 cm, barrel length 10,2 cm, caliber 11,3 mm, weight 300,5 g. As you can see, the trigger with the flint clamped in it is inside the receiver, like later samples of firearms weaponsadopted today! Metropolitan Museum of Art, New York

"Europe can wait."
(Abigal Masham)
History firearms. And it so happened that this kind and gentle queen (for which the people loved her) became the first monarch of the united kingdom of England, Scotland and Ireland. And she ended up in this position at the age of 37, and ... having 17 unsuccessful pregnancies behind her. It was under Queen Anne (1665-1714) that England entered the War of the Spanish Succession, and although she was practically not interested in politics, she managed to rule in such a way that she surrounded herself with a whole galaxy of famous statesmen, military leaders, scientists and writers. In the USSR, it was about this queen based on the play by E. Scribe "A Glass of Water" that the feature film of the same name was shot, which was released in 1979, while filmmakers from Great Britain, Ireland and the United States, in turn, shot their own film on the theme favoritism at the court of Queen Anne, which is called the "Favorite". Well, and the name of this queen was named ... a pistol, somewhat different from those that existed in England earlier. 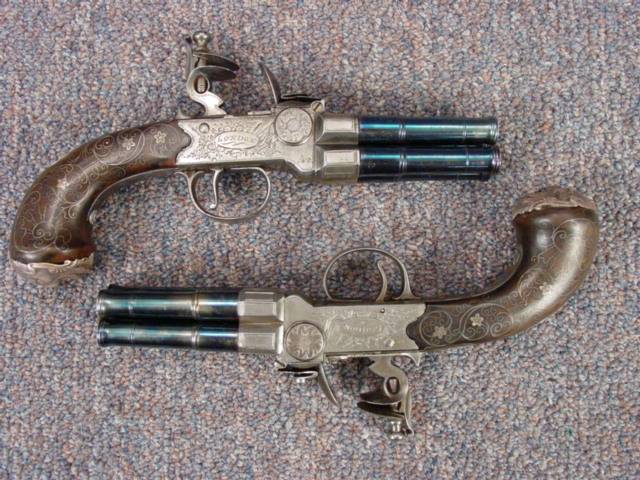 A pair of Queen Anne style box-lock quadruple pistols with artfully inlaid silver wire grips from London-based Perry. Caliber .40, blued barrels, no grooves, with a switch on the left side to select barrels for shooting. PERRY engraved on the left side of the receiver, LONDON on the right side. Photo courtesy of Alain Daubresse 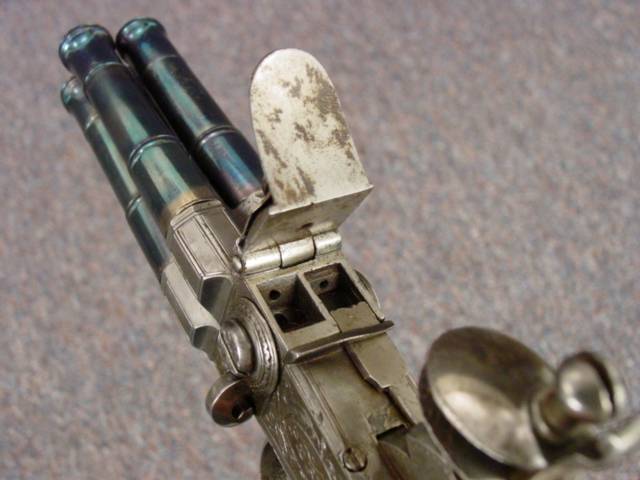 Close-up of the Perry pistol lock device. Photo courtesy of Alain Daubresse
In general, there was nothing special about the Queen Anne pistol. It was a conventional flintlock pistol with a specific trigger position within the frame. Such locks, unlike conventional flint weapons, in which the parts of the lock were located on the lock board, had a more compact mechanism located inside the box-shaped case, similar to modern pistols. Because of this, by the way, they were often called "box-lock pistols." In addition, another difference was that the ignition hole for the powder and the powder shelf on many of them were located on the top of the barrel, and not on the side, as before. Another feature of this weapon was the "cannon barrel" with a thickening at the muzzle. 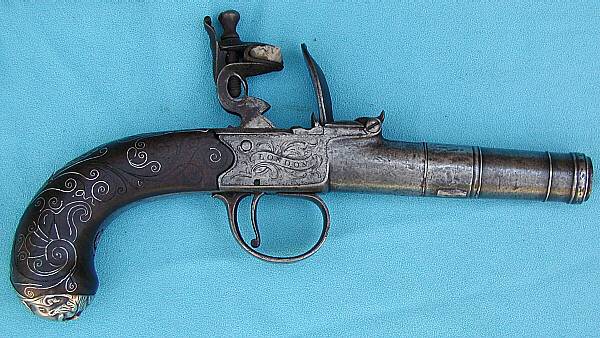 Typical queen Anne style flintlock pistol. Caliber .50, barrel length 76 mm. Stamp "H" denotes production in 1780-1781. with the word "ARCHER" on the reverse and "LONDON" on the obverse. Silver oval plate on the back of the box with the coat of arms and initials of the original owner, which have not yet been identified. Photo courtesy of Alain Daubresse
But this feature was not as important as another, associated not so much with the appearance of the barrel as with its device. The typical barrel of a Queen Anne pistol is unscrewed with a barrel wrench right in front of the chamber (you can do this with your hands!) And is loaded not from the barrel, but from the breech end. The chamber is long and narrow to match the caliber of the bullet. Because of this design, the bullet for the Queen Anne pistols was larger in diameter than the bore, whereas usually round bullets of that time were smaller in diameter in order to make them easier to load.

At the moment of firing, behind a bullet in such a pistol, a high gas pressure is created before it enters the barrel, due to which a significantly higher muzzle velocity is achieved than in muzzle loading pistols. Therefore, the barrel was often specially made rifled, which further increased the accuracy of firing from such pistols.

First made in England during the reign of Queen Anne, these pistols became popular and ... for some reason they got this name, although it should be borne in mind that the queen died in 1714, and at that time they had just begun to appear. These pistols were of various sizes and calibers, but for some reason they were most often produced as pocket pistols. Hence the many names invented for them: "pocket pistol", "pistol for a waistcoat pocket", and again - "a gun for a clutch". 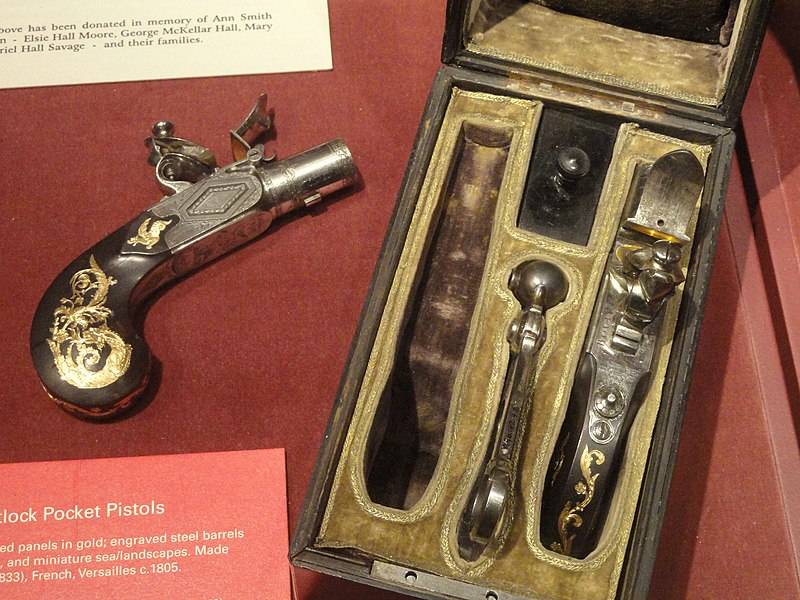 Some pistols of this type had very short barrels exclusively for shooting at point-blank range. Set by Nicholas Noel Bute, approx. 1805 Versailles. Royal Ontario Museum, Canada
It is interesting that these pistols were produced for more than 100 years, and not only as flint-type pistols, but then also as primer pistols, into which previously released models were very often altered. 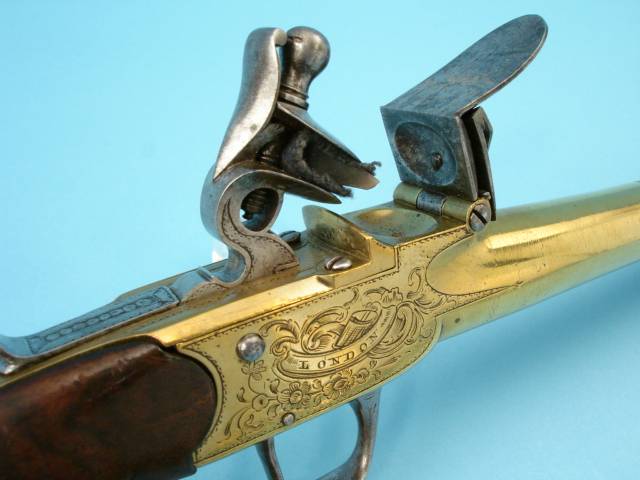 The device of the lock of such a pistol from the firm "Drury and Son" from London. Photo courtesy of Alain Daubresse
Such a device relieved the owner of the pistol from the need to wrap the bullet in cotton or cloth, or use a ramrod while loading. As a combat weapon, such pistols were not successful, since in the heat of battle, when loading, it was easy to drop a separate barrel. They came up with a swivel joint so that the barrel could be unscrewed, while it would remain attached, but this improvement clearly did not bring success. The most popular "Queen Anne pistols" have gained among civilians as an effective weapon of self-defense. They were often decorated to suit the tastes of wealthy buyers. 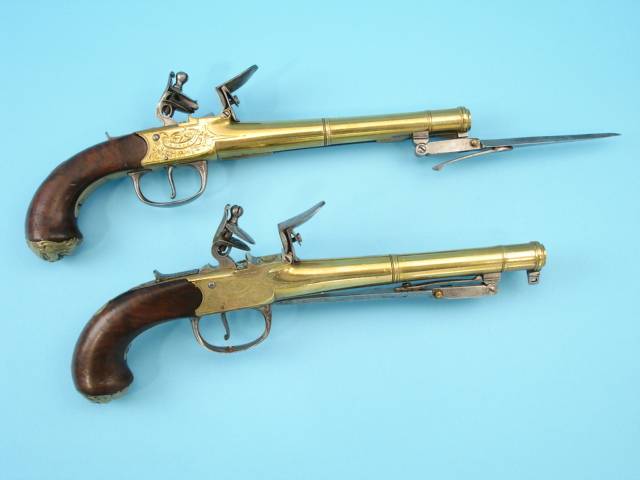 By the way, the pistols "Drury and Son" were also supplied with folding bayonets! Photo courtesy of Alain Daubresse
Probably the final development of the Queen Anne pistol design took place sometime around 1805, when Mortimer & Co. added a folding trigger and safety catch to it.

Another classic "Queen Anne pistol" from the firm "Mercier" from Liege. Photo courtesy of Alain Daubresse
For the wealthiest clients, English and French gunsmiths began to produce complete sets, consisting of a hunting rifle, two large dueling pistols and two small Queen Anne pistols with rich engraving on the barrels, locks and buttstock.

With the advent of capsules, the production of pistols of this type in England continued, only now they began to be made with capsule locks. In fact, it was these pistols that became the ancestors of the famous derringer created in the USA.

In continental Europe, pistols of this type received their own name "terzerol", which comes from the Italian word Terzuolo (hawk). The simplest and usually the cheapest versions of capsule terzeroles served to scare birds away from gardens and vineyards, or for ... hunting. Single and double-barreled versions were produced. Since the XNUMXth century, terzeroli have been manufactured with a flintlock, which in the XNUMXth century was replaced by a more reliable capsule lock.

Capsule "Queen Anne Pistol" by David Columbell. Caliber .58 mm. Collumbell is engraved, trigger guard and trigger are also engraved. Photo courtesy of Alain Daubresse
Due to the high demand for capsule terzeroli, which were produced mainly in Zella-Melis and Liège, many arms companies were engaged in their production, and they produced them from the middle of the 1930th century to the end of the XNUMXs of the last century.

Interestingly, the English gunsmith Harvey Walklate Mortimer, who was the personal gunsmith of George III (1730-1820), took a special interest in the loading mechanism, which is believed to have been invented by the Florentine gunsmith Michele Lorenzoni (d. 1733). Lorenzoni's sophisticated internal system allowed up to ten consecutive shots to be fired using charges (bullets and gunpowder) from a magazine hidden inside the grip. When the lever was turned one hundred and eighty degrees forward and then back, the pistol was reloaded and was already cocked, so the shooter had only to add gunpowder to the shelf. Mortimer's meticulously constructed pistols of the Lorenzoni type reflect his high level of craftsmanship and ... the technical perfection of Lorenzoni's own design. 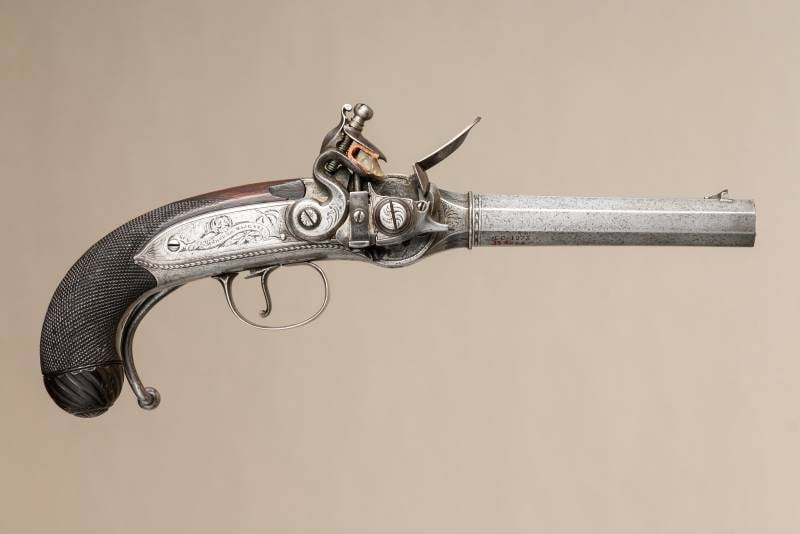 It is believed that it was Mortimer who made the pistol that belonged to Vice Admiral Horatio Nelson (1758-1805), as its heraldic insignia are engraved on the barrel and on the grip plate. Metropolitan Museum, New York 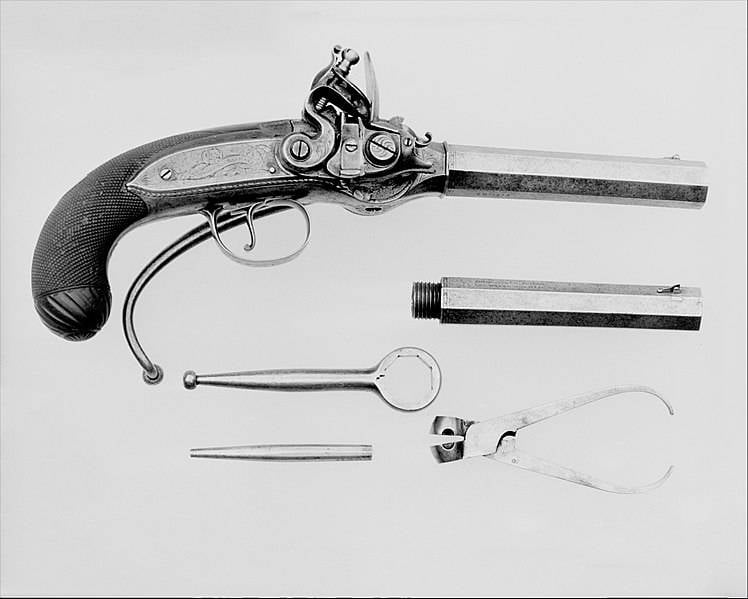 The same pistol disassembled and with a set of accessories, including a key for unscrewing the barrel. Metropolitan Museum, New York 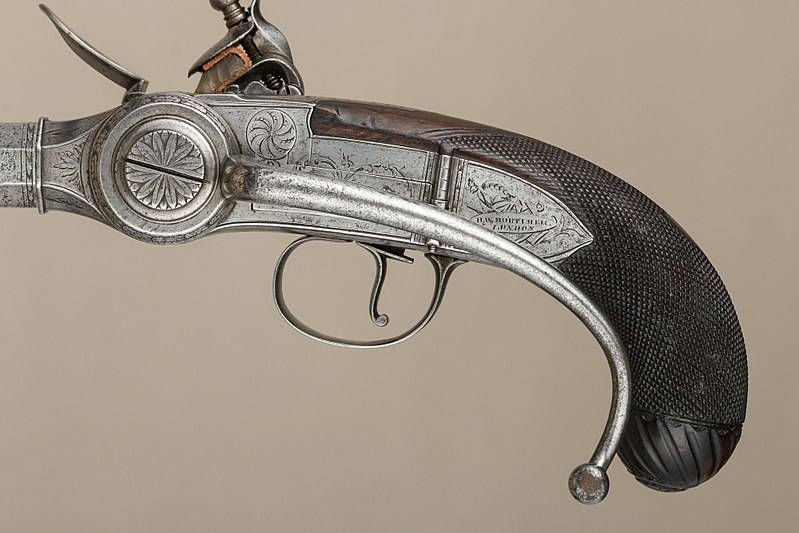 "Nelson's Pistol". Left side view of the reloading handle. Metropolitan Museum, New York
To be continued ...