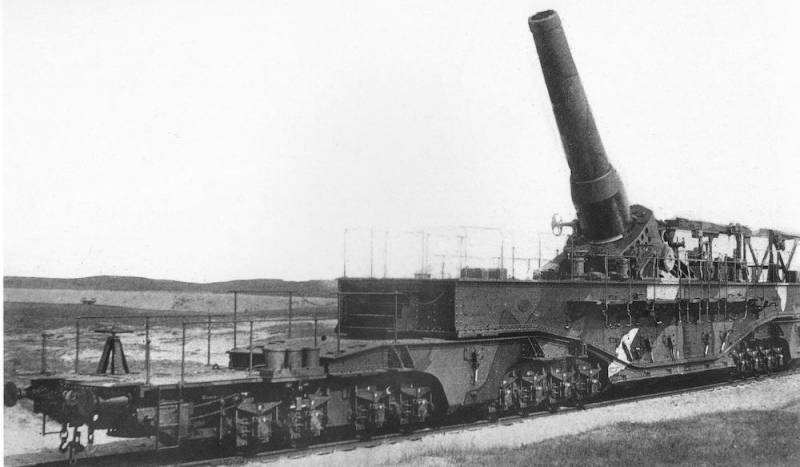 By the time the First World War broke out, many countries underestimated heavy artillery, this was true for all Entente countries. In turn, the German army initially relied on heavy artillery systems, which were supposed to crush the enemy's defenses, clearing the way for infantry and cavalry.

It can be said that before the start of the conflict in France, the development of heavy artillery was rather frivolous, if not contemptuous. The calculations of the French command were based on rapid offensive operations, attacks, bayonet strike and quick victory. The French army practically did not prepare for a protracted war and defensive operations.

Based on the chosen strategy of warfare, the French generals relied on light and rapid-fire guns, primarily on the 75-mm cannon, which was affectionately called Mademoiselle soixante quinze (mademoiselle seventy-five). However, the outbreak of the war and its character quickly put everything in its place. By the end of 1914, battles on the Western Front acquired the character of trench warfare. The enemy armies burrowed into the ground and erected more and more fortifications.

Under these conditions, the French began to feverishly build up their heavy artillery, making the main bet on the railway option for placing super-powerful guns. Quite quickly, a whole line of railway artillery systems was created in France, the pinnacle of which was the 520-mm railway howitzer Obusier de 520 modele 1916.

Towards a super-powerful 520mm gun

After a quick victory in the war did not work out, the French military quite quickly switched to ordering more and more advanced and powerful artillery systems, each of which was superior to the previous one. Unlike their allies, the British, the French initially relied on the railway option to deploy heavy artillery. 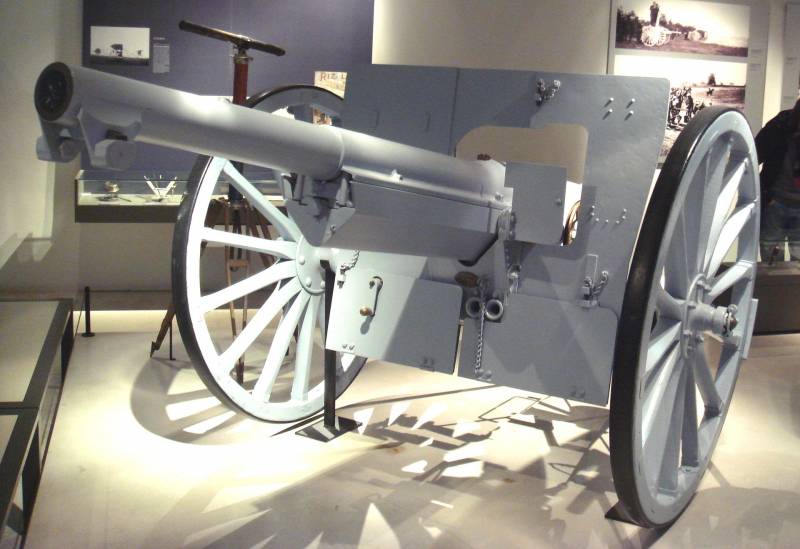 French field 75-mm gun, model 1897
This option had its advantages. The railway made it possible to bring up and prepare the guns for firing without regard to the state of the road network, muddy roads and other weather conditions. True, a railway track was needed, but there were no special problems with it in Europe, which was quite compact in size. In the absence of a railway, a new path could simply be paved, since the positional nature of hostilities did not interfere with this in any way.

Already in 1915, the French company "Schneider" (this power engineering company still exists today, it has five factories in Russia) developed and presented a whole line of railway artillery installations, which were based on naval guns. In addition to the Schneider company, the companies Batignolles and St. Chamond ". It was a large line of artillery systems with caliber from 164 to 370 mm.

Against this background, the developments of the St. Chamond, whose engineers created one of the most powerful French artillery systems in stories... It was the artillery systems of this company, along with the Schneider company, that gained the greatest fame, and not because of their massiveness, but because of their special power. PR here clearly surpassed common sense, which will already be proved by the Second World War.

At the same time, the 400 mm St. Chamond M1915 / 1916 looked even more or less justified and had a fairly high efficiency. This model combines a large caliber and good technical characteristics. The effectiveness of combat use was also at the level. The very first combat use at the end of October 1916 showed that only two hits in the German-occupied Fort Douaumont near Verdun were enough for the Germans to abandon the entire nearby sector of the front and retreat. 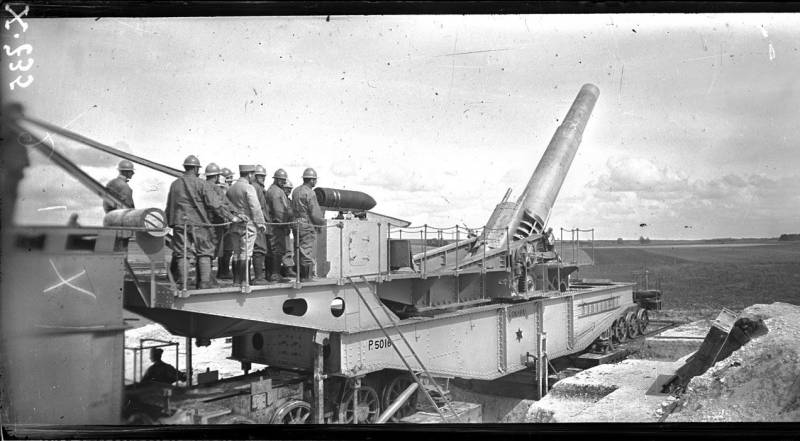 400-mm howitzer St. Chamond M1915 / 1916
The 400mm gun, like many other French heavy artillery systems, grew out of naval guns intended to arm battleships. The barrel of the gun was a shortened version of the old 340 mm M 1887 naval cannon, which was reamed to 400 mm. At the same time, in contrast to the German "Big Bertha", which was a mortar, here it was about an artillery gun with a barrel length of 26,6 caliber (the length of the rifled part is 22,1 caliber).

The gun stood out for its excellent characteristics for those years, sending 650-kg shells at a distance of up to 16 thousand meters. At the same time, the content of explosives in ammunition, which developed a speed of 530 m / s, reached 180 kg. The conveyor installation itself was made according to the "carriage with a cradle" scheme. The mass of the entire installation reached 137 tons, and the preparation of the position took up to two days.

Despite the impressive results of the use of already created artillery systems, the French military wanted to get even more powerful weapons. The order for two new super-heavy 520 mm railway howitzers was issued to Schneider on January 24, 1916. It took more than a year to create artillery installations of special power. The first of them was assembled by November 11, 1917, the second - by March 7, 1918.

The timing of the creation of artillery installations was seriously influenced by the fact that guns of comparable caliber neither in the army nor on navy at that time it simply was not. For this reason, the 520 mm gun had to be developed from scratch.

A new artillery mount of special power was built in only two copies. Tests of new weapons were carried out in the presence of journalists. The first shooting took place in February-March 1918. The presence of the press and its interest in the novelty were understandable. The French definitely wanted to use the propaganda effect. At the same time, it was planned to inspire their soldiers and demoralize the enemy soldiers.

It is worth noting the fact that during the First World War, Great Britain, which is an ally of Russia and France, also lost sight of heavy artillery. Despite the developed industry and the presence of a powerful fleet with a variety of large-caliber artillery systems, the Vickers 305-mm siege howitzer remained the most powerful installation of the British army during the First World War. She was also supplied to Russia. By 1917, there were at least 8 such howitzers in the TAON group (special heavy artillery).

At the same time, the fate of the installations was unfortunate. First, they were ready for the very end of the First World War. Secondly, one installation was lost during the tests. On July 27, 1918, on the Quiberon Peninsula, during test firing, a shell exploded in the barrel of the first built 520-mm howitzer, the installation was completely destroyed.

The second 520-mm railway howitzer of special power remained the only artillery system of this caliber built in France. She also did not have time to take part in the First World War, and after the completion of test firing from 1919, it was stored first in Le Creusot, and then in a specially built arsenal of heavy railroad artillery in Neuvy Payou. Ammunition, spare barrels and generating substations were also stored there.

The vertical guidance angle of the howitzer of special power ranged from +20 to +60 degrees, the installation was not guided in the horizontal plane. For horizontal guidance, the entire 520-mm installation had to be moved along curved railway lines. 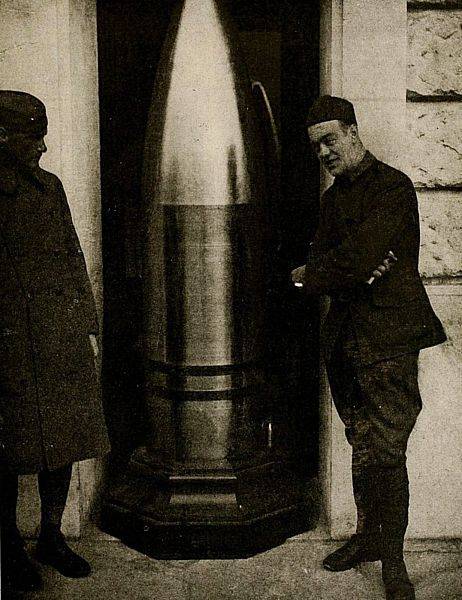 French soldiers in front of a 520-mm projectile
To load the gun barrel, it was necessary to lower it to a horizontal position. The lifting and supply of shells had an electric drive, for power supply of the artillery system, a special electric generator was provided in a separate car (power up to 103 kW). It could not be otherwise, since high-explosive ammunition weighing 1370 or 1420 kg, as well as concrete-piercing shells of a monstrous mass of 1654 kg, were used to fire the howitzer. The gun was loaded separately.

1370-kg light-type projectiles, if they could be called such, developed an initial velocity of up to 500 m / s. Their firing range was up to 17 km. Heavy concrete-piercing 1654-kg ammunition developed a speed of no more than 430 m / s, and their firing range was limited to 14,6 km. The rate of fire of the installation did not exceed 1 shot per 5 minutes.

Preparing artillery positions for the super-powerful howitzer took a long time. It was necessary to strengthen the railway track by laying additional sleepers. Steel beams were also laid on the canvas itself, onto which 7 supports of the railway installation were lowered with the help of screw jacks. Five of these supports were located under the middle part of the railway platform directly under the gun, and one support was located under the balancers of the chassis.

The fate of the 520 mm Schneider railway howitzer

The installation, developed at the very end of the First World War, flashed in the media throughout the 1920s, but its fate was unenviable. She never fired at the enemy either in World War I or during the blitzkrieg of the Germans in France in the spring and summer of 1940. The installation, which retained its combat capability and was not disabled, went to the German army as a trophy. 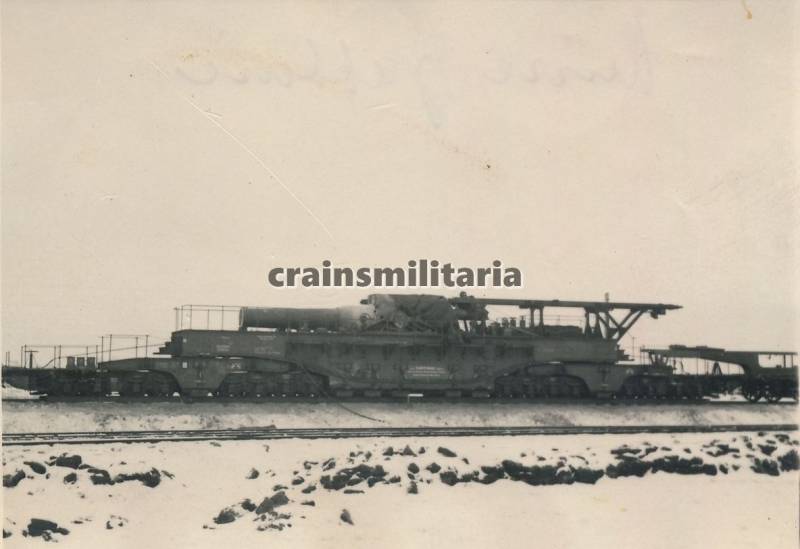 A 520-mm French railway howitzer captured by the Germans near Leningrad
From France, she went to Leningrad. The Germans used a heavy-duty howitzer, designated 52 cm Haubitze (E) 871 (f), from the end of October 1941. The Germans used the gun that arrived at the front to fire at targets in the vicinity of Leningrad.

True, the period of her stay near Leningrad was short-lived. Already on January 3, 1942, the installation was destroyed as a result of the explosion of a shell in the barrel. The same story happened as with the first built sample. At the same time, the howitzer was not subject to restoration, and in 1944 the remnants of this railway artillery installation were captured by Soviet troops as trophies.