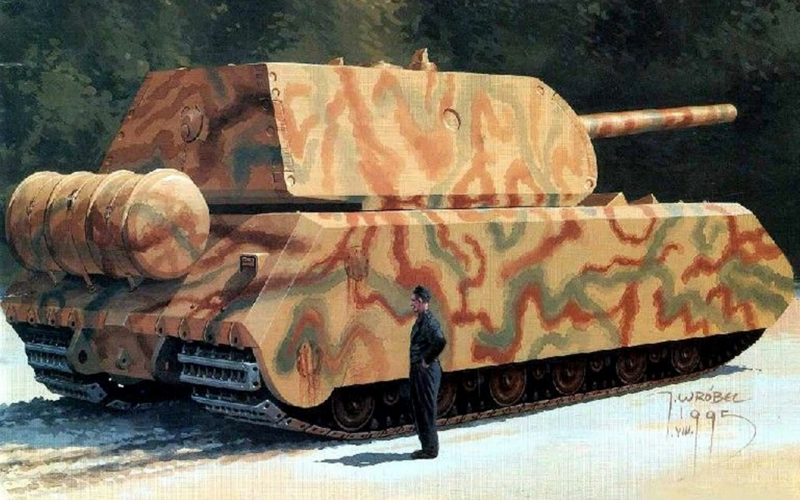 Having invaded the Soviet Union, the Germans excelled in tactics and operational art, but grand strategy remained hostage to the inability to collect the necessary amount of intelligence and bring it to the decision-makers in time. The Third Reich sincerely believed that the Soviet Union was a golem with feet of clay, capable of collapsing after the first serious blow.

This unrealized hope was not the only misconception. It turned out to be a surprise for the enemy and tank troops of the USSR. Namely - the presence in them of the latest T-34 and KV, seriously armed and armored against shells. It is not worth exaggerating the importance of these tanks. They were still largely damp, with serious problems in the organizational structure of tank units. And the Germans had effective means of dealing with the new tanks. The T-34 and KV were not a miraculous lifesaver, but they were quite pulling for a serious trump card in a difficult fight. And they made a serious contribution to the main result of 1941 - the fact that the country, in general, stayed on its feet.

Another effect was psychological, and it was already affecting the Germans. Suddenly faced with new Russian tanks, which turned out to be much more powerful than expected, now they were ready to believe in any fairy tales. And intelligence reports that began to arrive at the beginning of 1942 that the enemy was about to roll out something on the battlefield, in comparison with which the KV would seem like an affectionate hamster, were taken seriously.

In order not to find themselves with a bare belly against the fact that "akht-akhty" do not take, the Germans rushed to design their super-heavy tanks. The business started in March 1942 - the order for the chassis and turret of the future "Uberpantzer" was received, respectively, by the companies "Porsche" and "Krupp". 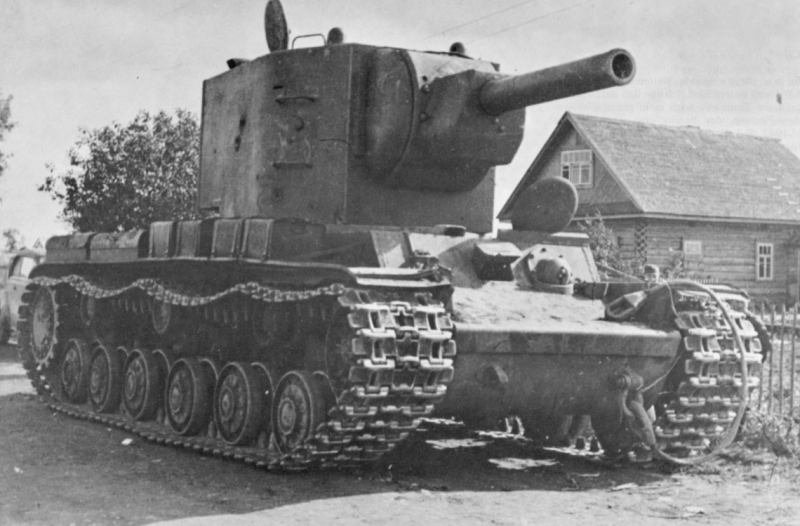 After the KV-2, the Germans were ready to believe in anything.

It was assumed that the weight of the "antidote" would reach no less than a hundred tons, and the reservations in places would reach an impressive figure of 220 millimeters - the Germans clearly claimed to create a machine invulnerable to artillery fire.

Armament projects were different - either 128-mm, or 150-mm, or 170-mm cannon as the main caliber. In addition to them, they were thinking of adding a 20-mm or 37-mm autocannon for firing at low-flying air targets and built-in flamethrowers. In a word, no one was going to be shy and limit themselves to some boring rationality.

Payment for weapon dreams were quite tangible - the design weight of the future product grew by leaps and bounds. Spring did not have time to really end, but she had already exceeded 120 tons. Not yet born, "Mouse" (Mouse) already ate for ten. By the fall, she had grown to 150 tons, and on the anniversary of her own development, quite rumbling, she patted herself on the stomach, eating up to 180. The built prototype gained another 8 tons, which, in principle, did not look so scary against the background of mouse bulimia that had played out earlier. In the end, the project looked so cool on paper that it was almost impossible to resist trying to implement it. But in the end it began to resemble a "suitcase without a handle."

Only the "fast Heinz" Guderian, who at the time of making decisions (in the summer of 1943), was the inspector general of tank forces, could do this. He was a capable, although not always, certainly, a controlled tank commander and understood that a tank should be fast and able to move without problems on ordinary bridges. After all, it is needed not in order to hit everyone with its muscles, but for quick and deep breakthroughs and closing the cauldrons - or, if we are talking about defense, for an emergency response to enemy breakthroughs.

But Guderian was alone. And there were still plenty of other officials who made decisions. And in the end, the Germans succumbed to temptation and announced the order for as many as 140 "Maus". The figure was fantastic - very quickly it turned into a much more modest "5 units per month". But soon something happened that broke these plans too. 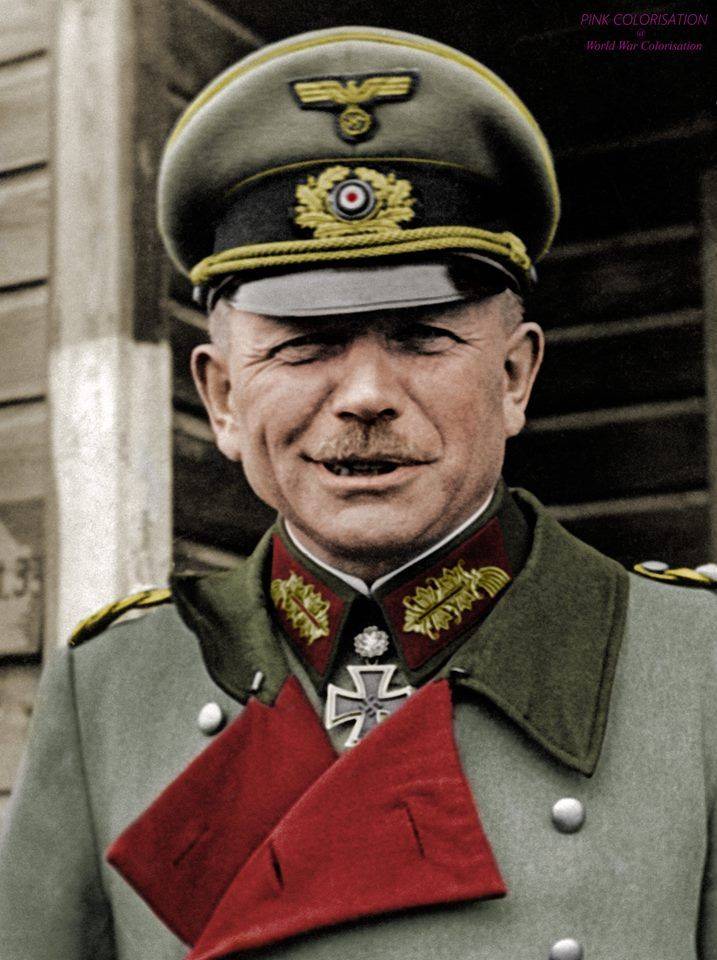 Guderian was the only dignitary who did not appreciate the new tank. And the influence to slam the mouse in the bud was not enough for him.
Corrections, as is often the case in wartime, were made by the actions of the enemy. One fine day, seven hundred British bombers flew into Essen factories, which smashed the entire production to pieces. The blow for the super-heavy tank project was so sensitive that the Germans reduced their expectations to just two prototypes. And the next year (1944) they completely abandoned the idea of ​​"Mouse". Which, however, did not mean that the two chassis and one turret, which they had managed to produce by that time, would be scrapped.

Out of all this joy, they assembled one and a half tanks - one full-fledged and another only with a model of the tower. And they began to diligently roll these heavy objects around the tank range. Whether all those involved were hoping for some results, or were they just fooling around so as not to go to the front with a faustpatron in their teeth (the latter was especially important for the final months of the war), it is difficult to say today.

Can ride and fight


Be that as it may, they had not so rotten excuses - "Mouse" did not resemble barely alive and breaking tanks of the First World War, it could easily move, maneuver, make rather filigree (for its size and weight) turns.

The tank was not even stopped by flooding in a swampy corner of the landfill. Yes, he was hopelessly stuck up to the very tower and refused to move, even when several 18-ton tractors were driven to him at once. But the problem was completely solvable: several dozen soldiers with shovels - and the prototype was released. There was no fundamental problem like “we are stuck here forever”, peculiar to “Tsar-tank”. 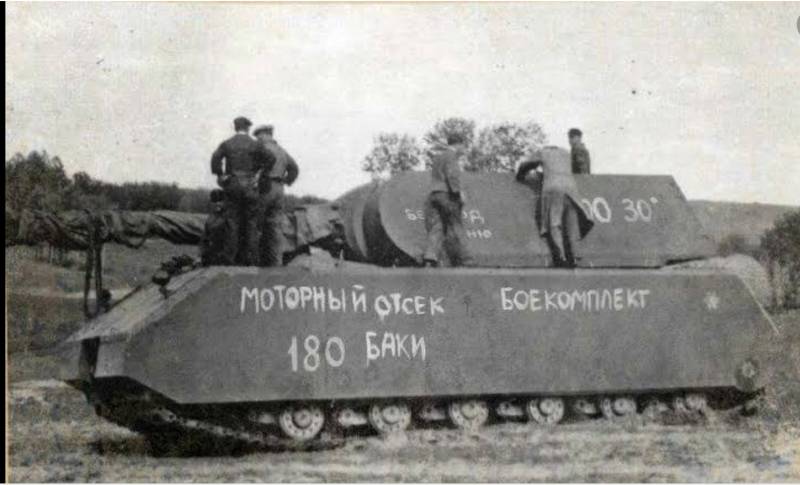 But the war inevitably came to an end - the Eastern and Western fronts squeezed Germany from two sides, leading the Germans to an inevitable conclusion. Someone, like Hitler, believed that if the plans conceived at the beginning of the war did not work out, then at least one should leave with the dignity of the Nibelungs, desperately fighting until it was completely destroyed. Someone was thinking about something completely different - about the need to run before it's too late.

The Muses ended the war in accordance with the second path - they did not go to the last battle in an attempt to exchange for a dozen or two T-34s, but were blown up and got to the Russians in a mangled form. The latter were impressed by the hulks and restored one of the tanks - the entrails were no longer there, and, therefore, he was deprived of the ability to move. Today it can be seen in the tank museum in Kubinka outside Moscow. One gaming company, I remember, was aiming to make a running car out of the damaged "Mouse", but, realizing the true scale of the task at hand, quickly forgot about it. Therefore, in the museum you can look at an impressive, but completely slow-moving exhibit.

When trying to mentally “play for the Germans” it is very difficult to imagine a realistic scenario where they could win the war - the industrial potentials of the opposing coalitions were too unequal. But it was quite possible to delay it - even in some 1944.

Take, for example, Operation Bagration, the success in which radically changed the situation on the Soviet-German front. Something happened that had never happened before - it was not the army that collapsed, as at Stalingrad, but the whole Army Group Center. A hefty hole had formed in the front, which had to be plugged with already quite hastily mobilized soldiers. The German infantry was no longer the same, and it became much easier to break through the defenses, organize new cauldrons, and move westward.

If something went wrong in "Bagration" - as it did in the winter of 1943-1944 near Vitebsk, in an attempt to hack the enemy's line of fortifications in the Belarusian forests, the advance of the Russians could have gone at a much slower pace. Giving the Germans a year or two for a hopeless but desperate resistance fueled by Nazi fanaticism. If there were a few more coincidences, the Germans could take and try to build the planned 140 "Maus". And to overpower at least fifty of them - of course, to the detriment of other machines.

The question is, who would benefit from this?

It is difficult to say unequivocally - perhaps the disadvantages would outweigh the advantages. But the Germans would definitely not have won an unambiguous victory. 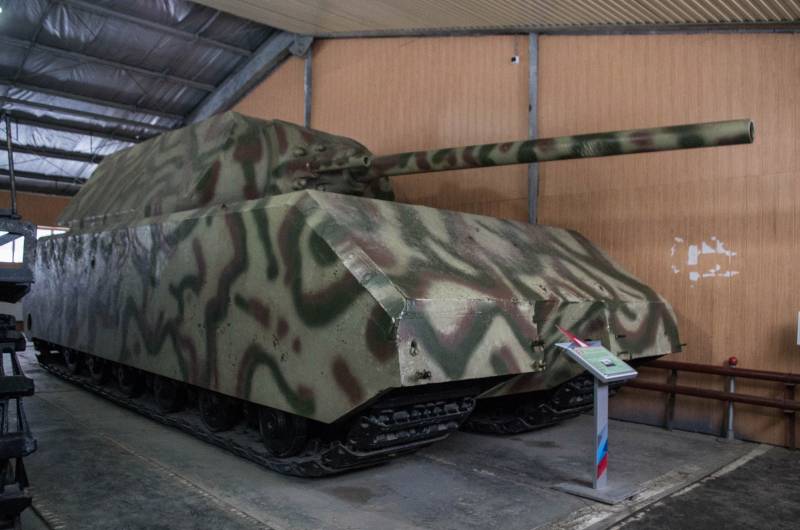 Yes, "Mouse" was not a polygon toy, it could ride and fight. Even the terrible mass that collapsed most of the bridges of that time did not bother him. The Germans vaguely guessed about such problems and far-sightedly equipped the tank with an underwater driving system so that it could cross rivers, at least along the bottom.

On the other hand, super-heavy tanks would hit terribly at their own quartermaster services, devouring 3500 liters of fuel per hundred kilometers. All this joy had to not only be obtained and processed (with which Germany had certain problems at the final stage of the war), but also delivered to the front. All this would cause a serious load on the already bombed logistics lines.

And - what would in any sense make all the efforts undertaken meaningless - "Mouse" was quite amazed at the tank guns of the Soviet Union. Not all, of course, and not everywhere - but the IS-2 and Su-100 completely flashed the mouse's sides. The situation here would be a little different from the times of Kursk, when T-34s with 76-mm cannons could well have destroyed the mighty "Tigers", which appeared in much greater (than ever "Mouses" could) number.

Of course, one should not oversimplify this issue and think that this fight with the "Tigers" was cheap - for such tactical tricks one had to pay a terrible price in human lives. But each "Mouse" would mean the absence of 4-5 "Tigers" or a dozen "fours" on the battlefield. At the same time, loading the logistics, possessing a much lower speed and infinitely weak, in comparison with the above-mentioned "menagerie", firepower.

Moreover, there is no doubt that a situation similar to Kursk would not last long - the industrially powerful countries of the Anti-Hitler coalition would simply “shift the focus” and saturate the front with weapons capable of killing the Mouse, possibly even head-on. So, the all-conquering, and, moreover, changing the strategic situation on the fronts of the "Maus" would not have been expected in any case.

Ctrl Enter
Noticed oshЫbku Highlight text and press. Ctrl + Enter
We are
Armored vehicles of Germany in the Second World War. Part of 2. The evolution of the organizational forms, the composition of the Wehrmacht Panzervawe and the SS troopsIron fist of the Red Army. Motorized and tank divisions
Military Reviewin Yandex News
Military Reviewin Google News
170 comments
Ad