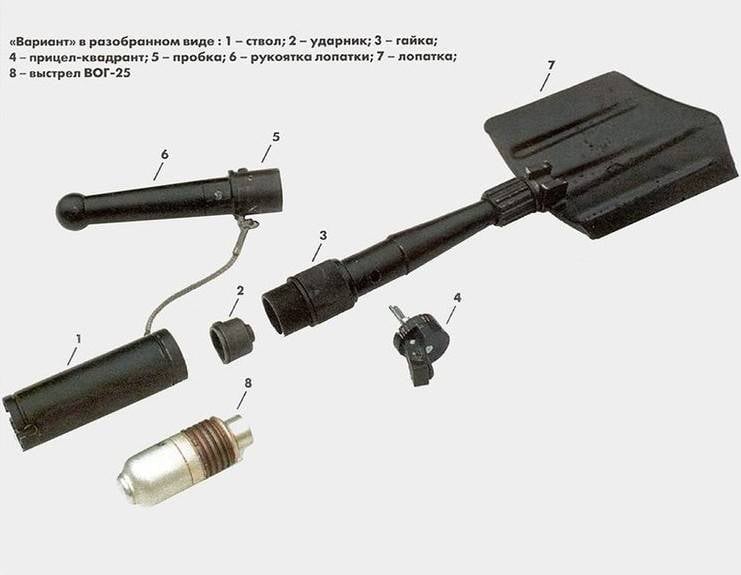 Elements of the product "Variant"

At the beginning of the Great Patriotic War, the VM-37 mortar shovel was in service with the Red Army for a short time. This product combined the functions of a small-caliber artillery gun and an entrenching tool. VM-37 had a number of congenital flaws that seriously limited its fighting qualities, and it was quickly abandoned. They returned to the idea of ​​a mortar-shovel only at the end of the seventies, but the new product "Variant" was also not very successful.

The idea of ​​a mortar-shovel in 1978 was brought back to life by the designer-gunsmith from the Tula TsKIB SOO Viktor Vasilyevich Rebrikov. This proposal was based on the same considerations and ideas as in the case of the VM-37. New weapon could increase the firepower of the rifle unit and provide a fragment of the trenches.

This took into account the latest developments in the field of infantry weapons. Under-barrel grenade launchers had already been adopted by the Soviet army, and the new model was supposed to supplement them in rifle units. It also provided for the use of standard grenade launcher shots. In this regard, the development of V.V. Rebrikov is most often referred to as a shovel grenade launcher.

The promising project was developed on an initiative basis and received limited support from the management of TsKIB SOO. In this regard, the weapon did not receive an index with the letters "TKB", and only the working title "Option" was used. The Bureau's leadership allowed the development and manufacture of a couple of prototypes. The further fate of the project depended on the results of their tests.

The expectedly initiative project attracted the attention of the military mission. Consequently, the tests were carried out under the supervision of a potential customer. Accordingly, with the demonstration of high characteristics, the "Option" could receive the support of the army, and with it, the real chances of getting into service.

In terms of its architecture, Rebrikov's Variant was similar to the VM-37 mortar, but a number of important innovations were proposed that affected all key components of the design. With their help, it was possible to obtain sufficiently high combat and operational characteristics - while ensuring the solution of fundamentally different tasks. 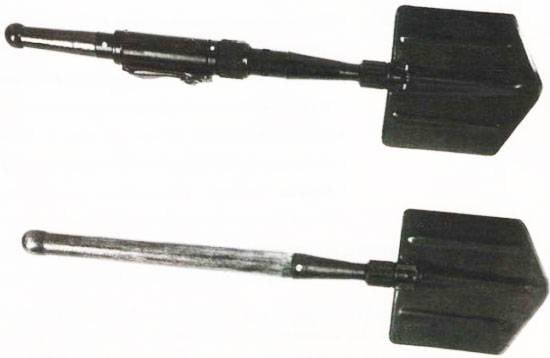 Shovel grenade launcher (top) versus a conventional entrenching tool
The Variant product was designed for the VOG-25 serial round for the GP-25 under-barrel grenade launcher. The 40-mm grenade went through a full cycle of tests, confirmed its characteristics and was put into service. The use of VOG-25 made it possible to unify the new grenade launcher-shovel with under-barrel systems, as well as to ensure the receipt of high power on the target.

The grenade launcher was structurally divided into several units. It included a firing part with a barrel and a trigger, a shovel blade (also known as a base plate), a removable sight and a plug handle. In the transport position or in the configuration for excavation work, the firing part and the blade were placed on the same line and fixed with a cylindrical coupling. At the same time, the sight was inside the barrel, closed with a removable plug-handle. To transfer to the firing position, it was necessary to remove the plug, install the sight and, if necessary, open the firing part with the base plate.

The shooting part of the "Variant" consisted of a rifled barrel of the type used on the GP-25. With the help of a thread, it was connected to a longer breech-shank, inside which was a striker-type trigger mechanism controlled by an external nut-coupling. There was also a sight mount on the shank. The opposite end of the shank was fitted with a hinge for connection to the base plate. The connection was carried out near the upper edge of the latter.

The slab, which also served as a canvas, repeated in shape and size the detail of a standard shovel. To increase rigidity and strength, three longitudinal stampings were provided on it. In the deeper central one was a hinge for the firing part-handle. With its help, it was proposed to carry out vertical guidance.

A simple quadrant sight was developed for the grenade launcher. It was mounted on the breech to the right in the direction of fire and allowed setting the range to the target. Horizontal aiming was carried out by rotating the entire structure around the axis, and for vertical guidance it was proposed to move the barrel manually towards or away from you. 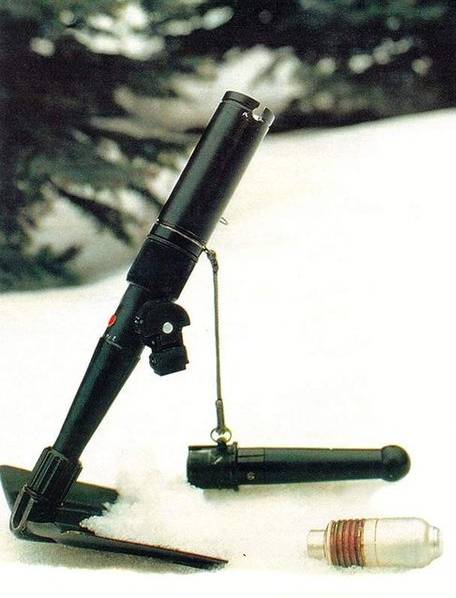 "Option" in the configuration for firing on mounted trajectories
In the configuration of the entrenching tool, the "Variant" product had the dimensions of a standard infantry shovel. Ergonomics remained almost unchanged, although the new "handle" in the central part was thicker due to the 40 mm barrel. Due to the use of a number of new parts, the weight of the product increased to 2 kg - versus 1,2 kg for a standard shovel.

The spent VOG-25 grenade and the rifled barrel made it possible to obtain sufficiently high firing characteristics. The estimated firing range reached 400 m with a theoretical possibility of good accuracy and accuracy. The power of the 40-mm ammunition was supposed to provide an effective fight against enemy manpower in open areas and behind shelters.

Shovel at the landfill

Two experimental "Variants" were tested by TsKIB SOO forces under the supervision of representatives of the Ministry of Defense. The unusual weapon has confirmed the design characteristics and has shown its capabilities. As a matter of careful study, the shooting was carried out both "in mortar" from different surfaces, and in other positions, incl. from the shoulder and with an emphasis on various objects.

In all cases, sufficient range and accuracy of fire was ensured, and target destruction mainly depended on the skills and experience of the grenade launcher. Shooting from the shoulder was possible, although it was complicated by the large recoil. The impact of the "Variant" was compared to the recoil of a gun with a powerful cartridge.

However, it was not without criticism. It was obvious that the combination of the functions of a tool and a tool imposes certain restrictions, incl. and potentially dangerous. So, the active use of a shovel could lead to damage to the mechanisms of the grenade launcher with the impossibility of firing or with other consequences. The thickened handle was not very comfortable, and the hinge was subjected to heavy loads.

"Option" was supposed to complement the infantry grenade launchers. However, the staffing number of the latter has already been determined taking into account the role and needs of the departments. Because of this, additional weapons with similar characteristics were no longer required. 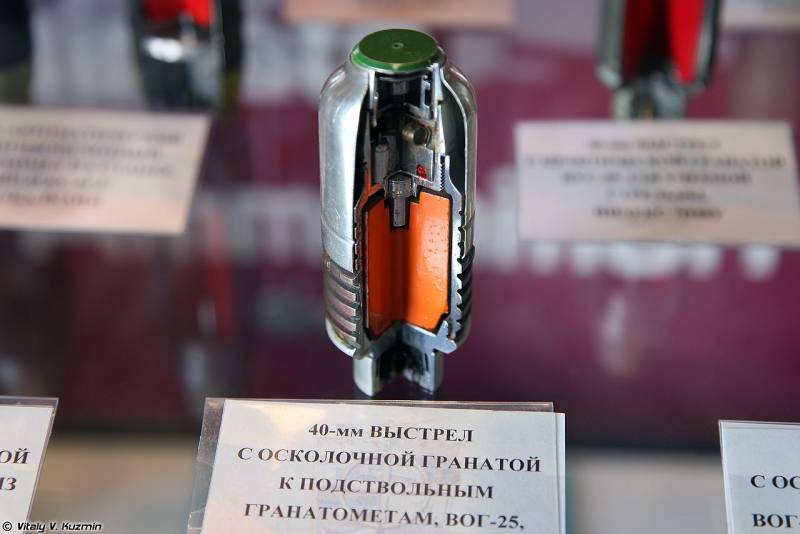 Split layout of the VOG-25 shot - a key component of the "Variant" system Photo: Vitalykuzmin.net
When adopting a grenade launcher for service, there would be legal problems. The grenade launcher would have to be responsible for the shovel grenade launcher as a full-fledged weapon. At the same time, any breakdowns during the execution of work could have unpleasant consequences, at least of a bureaucratic nature.

After testing, in 1981 V.V. Rebrikov received a patent for an unusual design. It was decided to continue looking for a customer, but this process did not lead to anything. It is known of limited interest from the engineering troops, which considered the possibility of making a small batch of grenade launchers for military trials. However, no real order followed.

The "Variant" project was developed without an order from the army and could not go beyond the proving grounds. This was due to the lack of interest from the customer, as well as the presence of a number of specific design features, incl. mutually exclusive. The proposed product did not have fundamental advantages over existing samples, and its versatility did not affect the opinion of the military.

It should be noted that the "Option" compares favorably with the previous VM-37. The main advantages were associated with the use of spent and effective ammunition with sufficient characteristics. An equally important innovation was the rifled barrel, which provided increased range and accuracy of fire.

In general, "Option" V.V. Rebrikov was similar to the result of a serious revision of the concept of the VM-37 product, based on the experience of its operation. However, the result of such a project, with all its curious qualities and advantages, did not find a place in the army. The functions of the means of increasing firepower remained with the under-barrel grenade launchers - with the same ammunition and similar characteristics.