From "Orion" to "Okhotnik": the most powerful drone UAVs in Russia 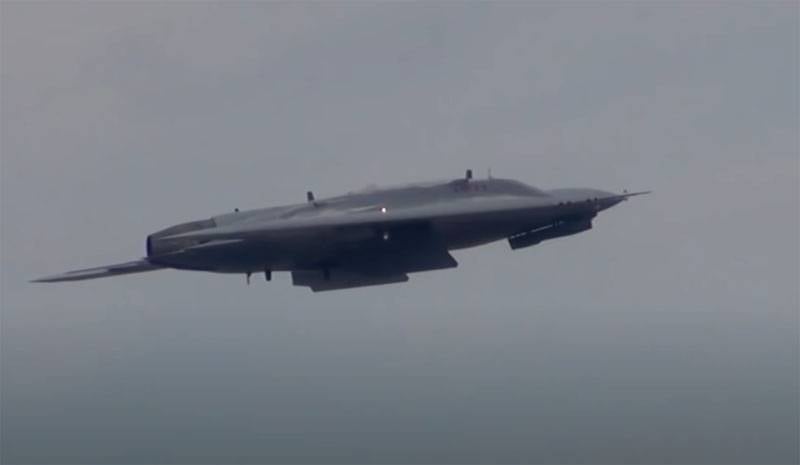 The success of the Russian Federation in the development of attack unmanned aerial vehicles has become a fait accompli. If earlier such machines were only in the plans, now it is clear that the same "Orion" may well be used in battle.


As for the devices of the heavier class, a long road of testing has been prepared for them. And, besides, the military only has to determine the role that they will play in a hypothetical war.

The main Russian attack UAVs "today" and "tomorrow" are already known. It is impossible to exclude the appearance of new products. However, there are obviously key projects that the country will still try to bring to a fully operational state.

(The characteristics of the export version of "Orion" are presented). 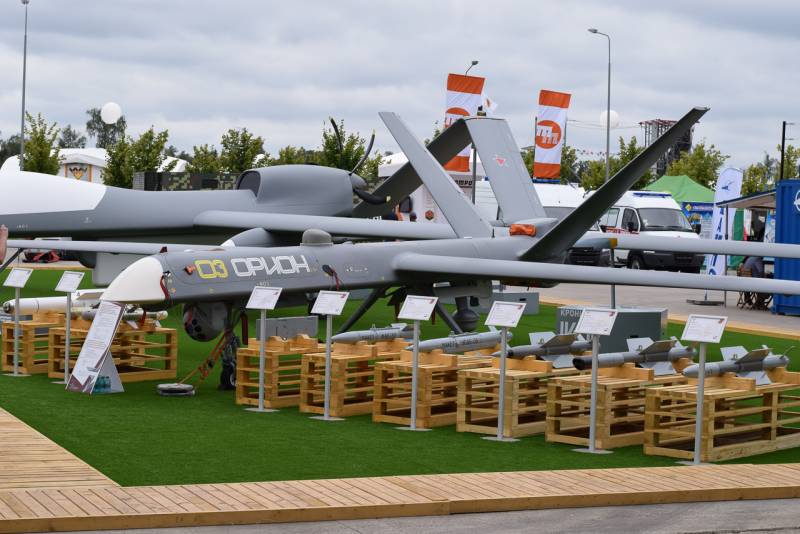 Photo: bmpd.livejournal.com
Developed since 2011 by order of the Russian Ministry of Defense, the device has come a long way.

The first complex of the Ministry of Defense was handed over last year: two control vehicles and three UAVs. In the Russian armed forces, he received a not too familiar for most amateurs aviation the designation "Pacing" (somewhat strange choice, it must be admitted). According to the department, in 2021, the Russian army will receive seven such complexes.

The most important stage of the project was the testing of the UAV in Syria.

Corresponding footage of Vesti Nedeli was presented this year. On the fuselage of one of the aircraft, 38 stars could be seen with letter markings "B", "P" and "P", which means "Combat", "Reconnaissance" and another designation of an unknown type. Based on this, it can be assumed that in total the UAV performed 17 combat missions.

According to information from open sources, the mass of the KAB-20S is approximately 20 kilograms, and the warhead weighs seven kilograms. The guidance system is satellite. 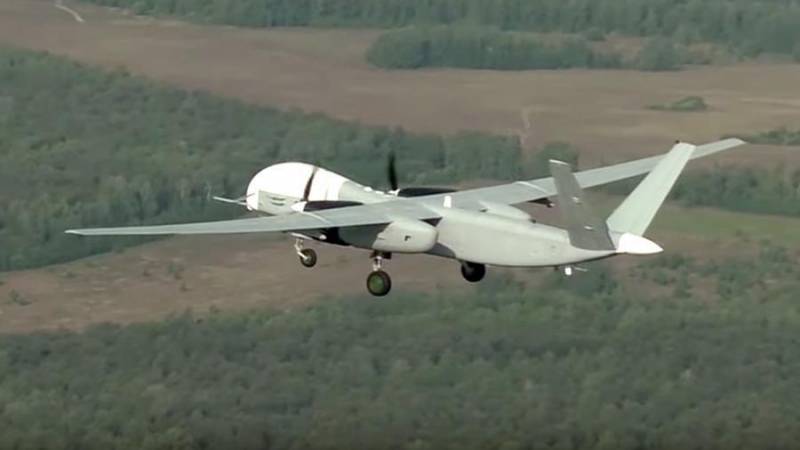 Photo: Ministry of Defense of the Russian Federation / mil.ru
History UAV "Altius" is very long (even by Russian standards). And in a way, she looks like an adventure detective.

OKM named after Simonov began to create the device in 2011 (the UAV had the designation "Altair"). In 2018, the project was transferred to the Ural Civil Aviation Plant.

The contract for the supply of the first batch of such devices to the Russian army was signed in 2021.

“As part of the implementation of the state contract for R&D (development work)“ Altius-RU ”for the development of UAVs by a separate subdivision No. 2 of JSC“ Ural Civil Aviation Plant ”(UZGA) in Kazan, the protection and closure of the“ Technical design ”stage was successfully completed.

A state contract has been signed for the manufacture and supply of a pilot batch of UAVs ",
- In February, the edition "Interfax" brought materials to the report of the Minister of Industry of Tatarstan Albert Karimov.

Among the features of BLPA are elements of artificial intelligence and the ability to interact with manned aircraft. 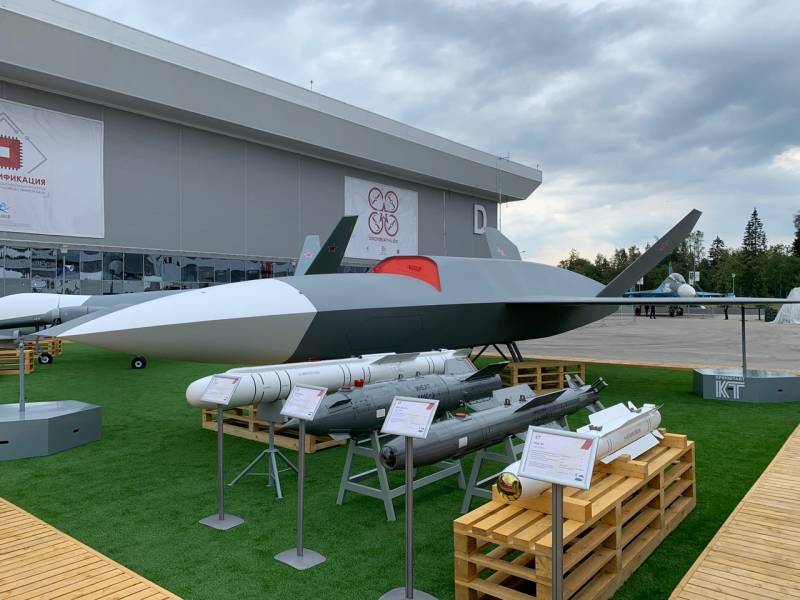 Model of the drone "Thunder". Photo: group "Kronstadt"
For the first time presented at the forum "Army-2020" the shock UAV "Thunder" has often made people talk about itself lately.

Mainly, this concerns its potential. According to data released in March by a source in the military-industrial complex, one such device will be able to control ten UAVs "Molniya", which can be launched by another aircraft carrier.

“The returnees are reconnaissance drones.

Shock, as in the case of loitering ammunition, - kamikaze.

"Lightning" will constantly communicate with each other and the drone carrier ",
- said the company "Kronstadt" later.

The drone itself is also quite remarkable.

It is assumed that he will be able to have weapons at four points of suspension: two of them will be located under the wings and two more - inside the fuselage.

Thunder will be able to carry the new X-38 air-to-surface missiles, which theoretically will bring its capabilities closer to the potential of manned fighter-bombers (the mass of the combat load of the latter, however, is still much more significant). In addition to the Kh-38, the UAV will be able to use the latest product 85 missile and the KAB-250 and KAB-500 guided bombs.

Among the most interesting features is the ability to work in conjunction with fighters, including the fifth generation Su-57 fighter. It is assumed that the "Thunder" will fly at a distance of about 200 kilometers in front of the manned aircraft, conducting reconnaissance and reducing risks to the controlled aircraft.

Unlike "Altius" and "Orion", this UAV exists so far only as a project.

Nevertheless, now it is among the most promising Russian developments of this type. 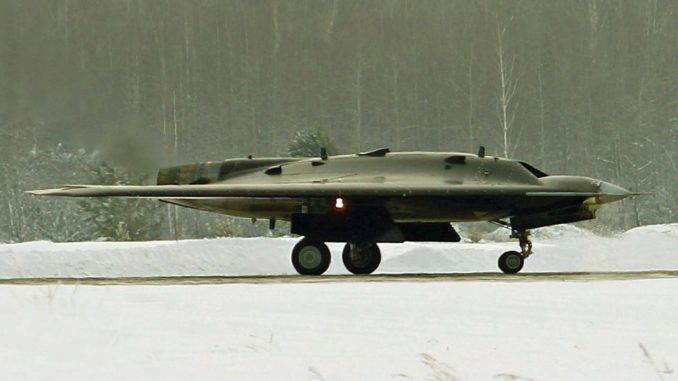 The Hunter is the heaviest, most expensive and heavily armed Russian UAV.

At the moment, no country in the world is armed with anything that would be even remotely similar to it in terms of its capabilities.

However, they are still more hypothetical. And by the time (if) Russia launches it into series production, the West and China may already have their own heavy UAVs of this class ready.

Strictly speaking, now there is no common understanding of what exactly the new apparatus will be.

At various times it was called a strike complex, an unmanned wingman and even an interceptor. Obviously, the most logical role is a reconnaissance and strike UAV.

According to data announced in February, now, in addition to the already flying prototype, three more such drones are being built.

Therefore, most likely, we will soon learn more about this, no doubt, a landmark project for Russia.