The use of captured German 20-mm anti-aircraft machine guns 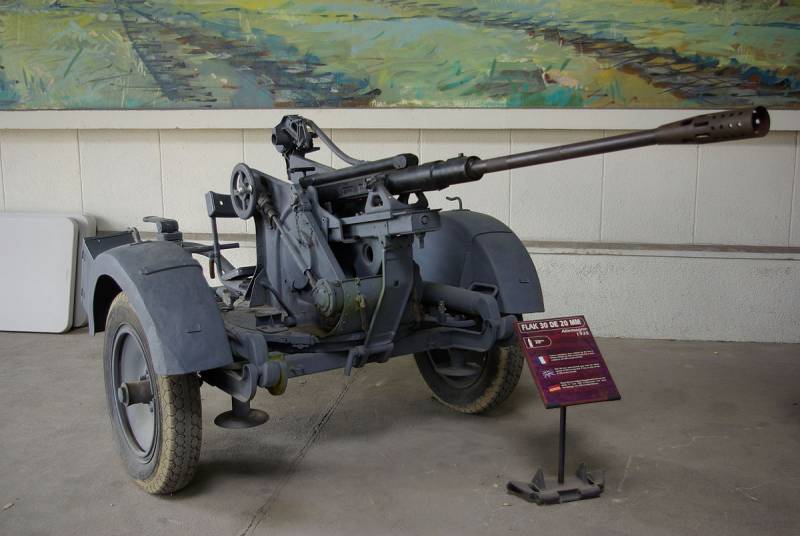 
The use of captured German anti-aircraft guns in the Red Army became quite natural.

In the initial period of the war, the Red Army experienced an acute shortage of rapid-fire anti-aircraft guns capable of effectively fighting the enemy aviation at low altitudes. And German captured 20-mm automatic anti-aircraft guns were in great demand.

In the post-war period, captured small-caliber assault rifles until the mid-1950s remained on the German destroyers, high-speed landing barges, boats, submarines and a cruiser, inherited by the USSR in the form of reparations.

During the Second World War, in the armed forces of Nazi Germany, the main role in providing air defense in the frontal zone was played by 20-37-mm rapid-fire towed and self-propelled anti-aircraft guns. 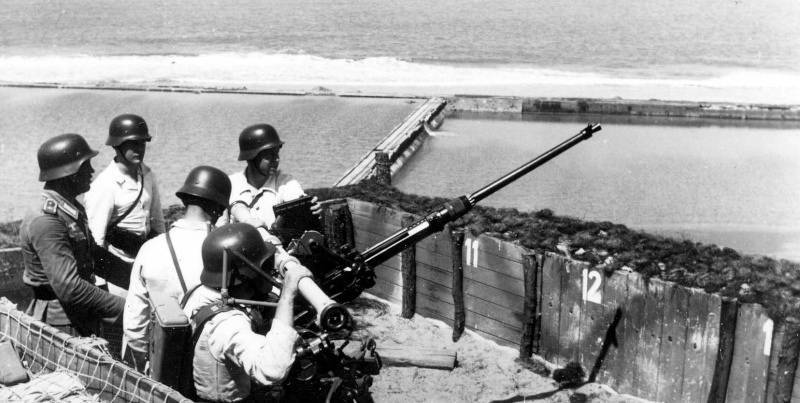 Calculation of 20-mm anti-aircraft installation 2,0 cm Flak 28 in firing position
The anti-aircraft gun, originally known as the 1S, was developed on the basis of the 20 mm "Becker cannon" created in Germany in 1914.

Firm "Oerlikon" stated that the reach in height is 3 km, in range - 4,4 km. However, the effective firing range was approximately two times less.

From 1940 to 1944, Oerlikon supplied 7013 20-mm assault rifles, 14,76 million rounds, 12 spare barrels and 520 ammunition boxes to Germany, Italy and Romania.
The Germans captured several hundred of these anti-aircraft guns in Belgium, Holland and Norway. According to German data, the Wehrmacht, Luftwaffe and Kriegsmarine had just over 3000 2,0 cm FlaK 28 installations.

Although the combat rate of fire of the 2,0 cm FlaK 28 (due to the low rate of fire and the use of box magazines for 15 and drum magazines for 30 rounds) was relatively small, in general (due to a simple and reliable design and acceptable weight and size characteristics) it was quite effective weapon, with a range of effective firing at air targets - up to 1,5 km. 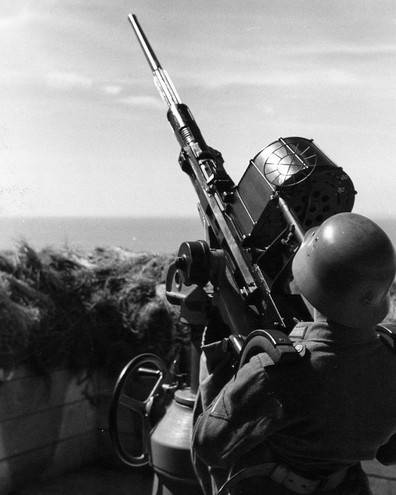 The main means of dealing with enemy aircraft at low altitudes in the armed forces of Nazi Germany were 20-mm anti-aircraft guns 2,0 cm FlaK 30 and 2,0 cm Flak 38, which differed from each other in some details. According to the 1939 staffing table, each German infantry division was supposed to have 12 20-mm FlaK 30 or FlaK 38 anti-aircraft guns.

In addition to Germany, these 20-mm anti-aircraft guns were officially in service in Bulgaria, Holland, Lithuania, China and Finland. The advantages of the Flak 30 anti-aircraft gun were: relatively low weight, simplicity of design, the ability to quickly disassemble and assemble.

The principle of automatic operation of the 20-mm anti-aircraft gun was based on the use of recoil force with a short barrel stroke. The installation had a recoil device and ammunition supply from a carob magazine for 20 shells. Rate of fire 220-240 rds / min. 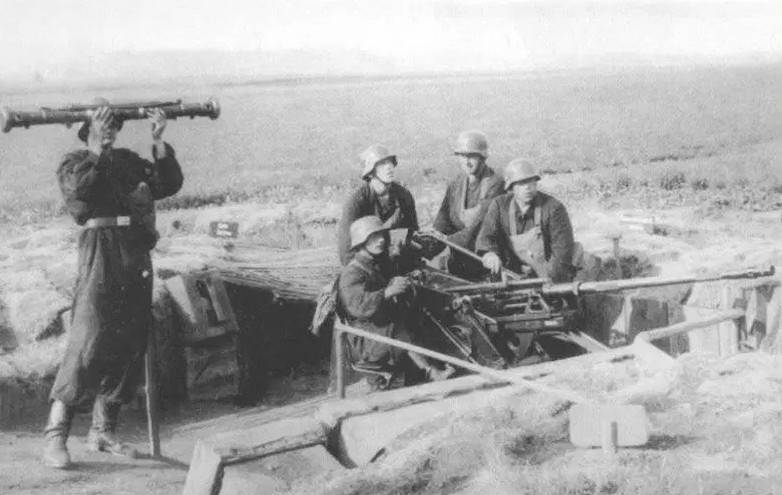 Calculation of the anti-aircraft gun 2,0 cm FlaK 30 at the firing position
The automatic building sight generated vertical and lateral lead. The data were entered into the sight manually and determined visually. In addition to the range, which was measured by a stereo range finder.

Also, the ammunition load included armor-piercing incendiary tracer and armor-piercing tracer shells. The latter weighed 140 g and, at an initial speed of 830 m / s, at a distance of 300 m, it pierced 20 mm armor. The effective firing range at air targets was 2400 m, the altitude reach was 1500 m. 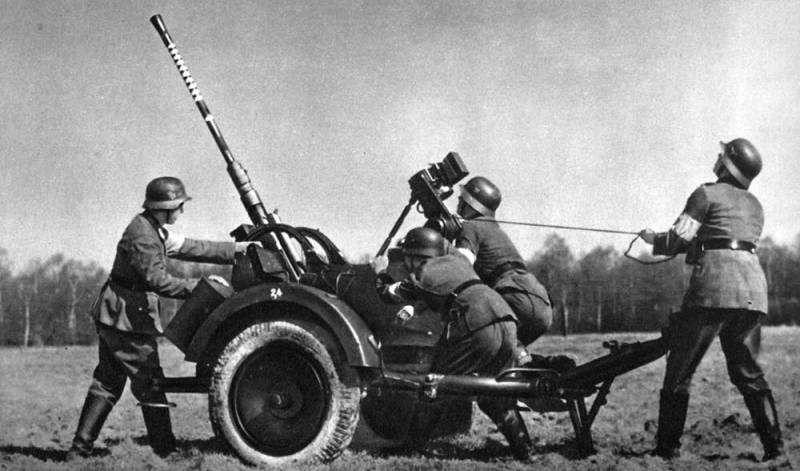 The calculation of the Flak 20 30-mm anti-aircraft gun translates it into a combat position
During transportation, the gun was placed on a two-wheel drive and secured with two brackets and a connecting pin. It took only a few seconds to remove the pin. Then the clamps were loosened. And the system, together with the gun carriage, could be lowered to the ground. The carriage provided the possibility of circular fire with the greatest elevation angle of 90 °. The mass in the combat position with a separate wheel travel is 450 kg, in the stowed position - 740 kg.

For use on warships, a 2,0 cm FlaK C / 30 installation was produced. A 20-mm anti-aircraft gun on a pedestal-carriage with a drum magazine for 20 rounds was intended for arming warships. But it was often used in permanent (engineering-protected) positions. A significant number of such anti-aircraft guns were in the fortifications of the "Atlantic Wall". 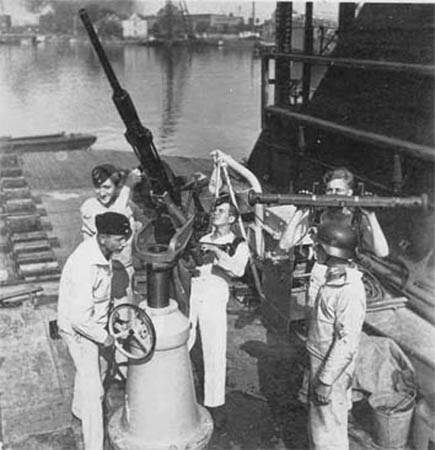 The baptism of fire of the 20-mm FlaK 30 anti-aircraft gun took place in Spain.

She proved to be an effective means of air defense and anti-aircraft defense. On average, 15-16 hits were enough to confidently defeat the I-2 and I-3 fighters. The presence of rapid-fire anti-aircraft guns in the target area forced the crews of SB-2 bombers to bomb from an altitude of more than 1500 m, which negatively affected the effectiveness of bomb strikes. Soviet lung armor tanks T-26 and BT-5 confidently penetrated 20-mm shells at a distance of 400-500 m.

Following the results of combat use in Spain, the Mauser company proposed a modernized sample, designated 2,0 cm Flak 38. This anti-aircraft machine gun used the same ammunition, the ballistic characteristics also remained the same.

The principle of operation of the automatics remained the same as on the 2,0 cm FlaK 30, but due to the reduction in the weight of the moving parts, the rate of fire was doubled - up to 480 rds / min. To compensate for the increased shock loads, special buffers-shock absorbers were introduced.

The changes made to the carriage design were minimal. In particular, a second speed was introduced in manual guidance drives. 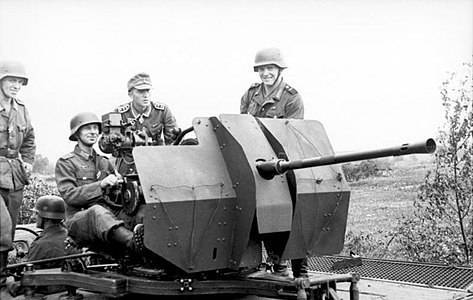 Since 20-mm anti-aircraft guns were often used for fire support of ground units, starting in 1940, some of them were equipped with an anti-fragmentation shield.

By order of the mountain infantry units, the 1942 cm Gebirgs-FlaK 2,0 anti-aircraft gun was mass-produced since 38 - on a lightweight carriage, which ensures the transportation of the gun in a "pack" way. 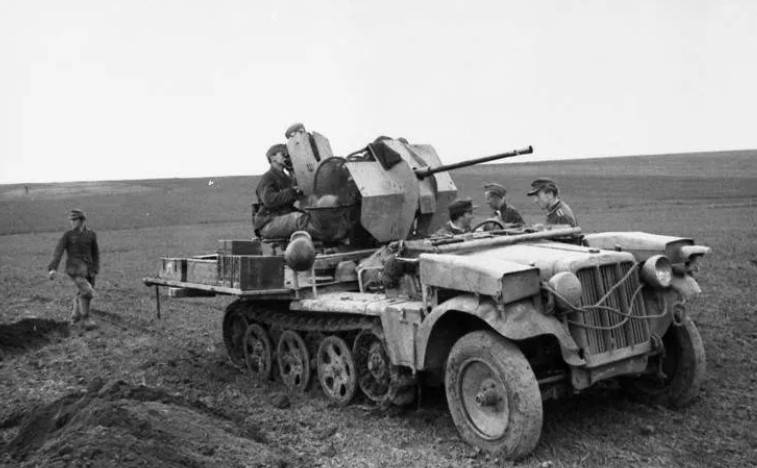 20-mm anti-aircraft gun Flak 38 on a half-track tractor
Self-propelled anti-aircraft guns were involved to accompany the columns, covered the places of concentration. And they often provided fire support to infantry units.

Taking into account the fact that the magazine supply of ammunition greatly limited the combat rate of fire, Mauser specialists based on the 2,0 cm Flak 38 assault rifle created a 20 mm 2,0 cm Vierlings-Flugabwehrkanone 38 quadruple anti-aircraft gun (2 cm quad anti-aircraft gun). In the army, this system was usually called - 2,0 cm Flakvierling 38. 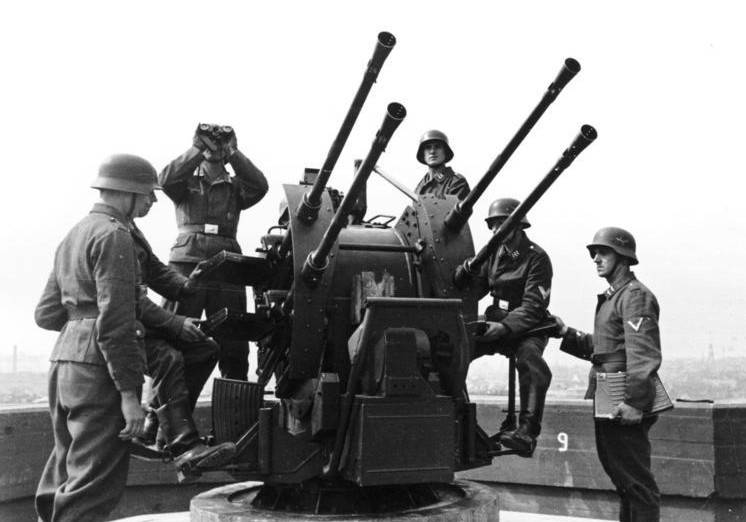 The carriage allowed firing in any direction with elevation angles from −10 ° to + 100 °.

Serial production of quad units continued until March 1945. A total of 3768 units were transferred to the troops. 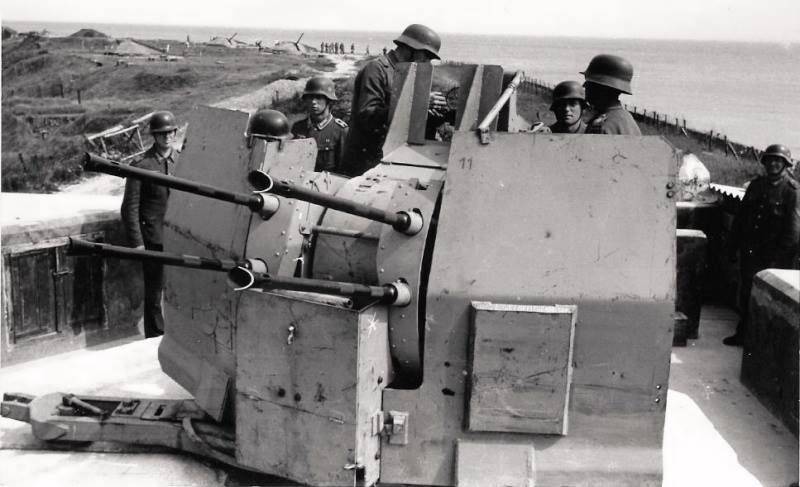 In the firing position, the quad mount weighed more than 1,5 tons, which negatively affected mobility. In this regard, the 2,0 cm Flakvierling 38 was often placed in stationary, well-prepared positions in engineering, installed on railway platforms. In this case, the calculation in front was covered with an anti-splinter shield.

On August 28, 1930, an agreement was signed with the German firm Bureau für technische Arbeiten und Studien (abbreviated as Butast), which was the front office of Rheinmetall-Borsig AG, an agreement was signed on the supply of a 20-mm automatic anti-aircraft gun to the USSR, among other guns. The German company provided technical documentation for a 20 mm anti-aircraft gun, two ready-made samples and one spare swinging part.

The production of the 20-mm assault rifle was entrusted to plant No. 8 (Podlipki, Moscow region), where it was assigned the 2K index.

The plant began manufacturing the first batch of 20-mm cannons in 1932. However, the quality of the machines produced turned out to be extremely low. And the military acceptance refused to accept anti-aircraft guns. The main reasons for the disruption of serial production of 20-mm automatic guns mod. 1930 was the imperfection of the machine tool park of plant No. 8 and low technological discipline.

For the first time, a significant number of 20-mm anti-aircraft guns (100 units) appeared in the arsenals of the Red Army after the Baltic republics joined the USSR in June 1940. Before that, the MZA 1S (2,0 cm Flak 28) produced in Switzerland belonged to the Lithuanian army.

In the initial period of the war, our main air defense assets were: a quadruple 7,62-mm M4 machine gun mount, as well as 76,2 and 85-mm anti-aircraft guns.

ZPU M4, which used four machine guns of the Maxim system with forced circulation of coolant, had a fairly high rate of fire. But they were cumbersome. And their effective range of fire against air targets did not exceed 500 m.

Anti-aircraft 76,2-mm cannons Model 1931 and Model 1938, as well as 85-mm Arr. 1939 - were quite modern weapons. But they were of little use for dealing with rapidly moving low-altitude air targets.

It was only in the second half of the war that it was possible to fill the shortage in the Red Army with 12,7 mm DShK machine guns and 37 mm 61-K assault rifles. And that is largely due to the supply of 12,7-mm American ZPU and 40-mm "Bofors" under Lend-Lease.

In the first years of the war, captured 20-mm anti-aircraft guns were highly valued. They had a simple and straightforward design. In most cases, there were no problems with their development. 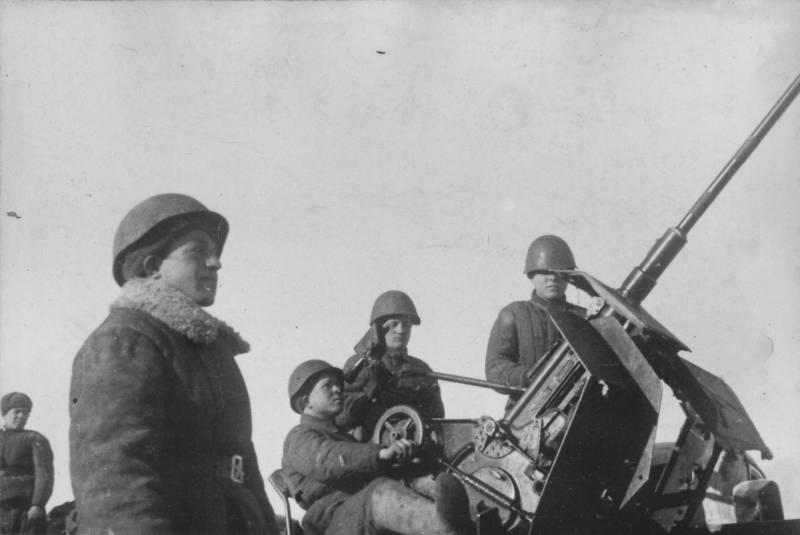 20-mm anti-aircraft gun Flak 30 with Soviet calculation
It is now impossible to establish how many suitable for further use German MZA were captured by the Red Army.

In combat units, they were usually used in excess of the staff. And often they were not taken into account anywhere.

Quite often, 20-mm anti-aircraft guns of German production in the Red Army were installed on trucks and railway platforms. Our troops willingly used captured ZSU based on half-tracked transporters. Often, such captured vehicles were used for reconnaissance and fire support for infantry. 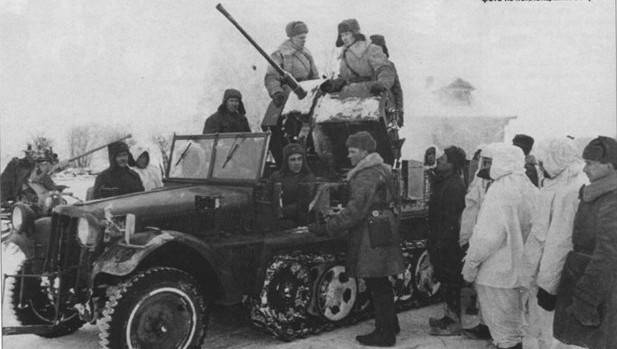 Assessing the effectiveness of the use of German rapid-fire anti-aircraft guns in the Red Army, it should be recognized that (due to poor training of calculations) in firing at air targets, it was lower than that of the Germans. Also affected by the lack of ammunition for the very "gluttonous" 20-mm machine guns.

Our soldiers usually did not know how to use optical rangefinders. And the range to the target in the sights, as a rule, was introduced to the "eye", which negatively affected the accuracy of shooting.

After the end of the war, the trophy towed 20-mm anti-aircraft guns available in the ground forces were sent to storage bases, where they were located for about 15 years.

At the same time, until the second half of the 1950s, single-barreled 2,0 cm FlaK C / 38 and twin 2,0 cm FlaK-Zwilling 38 were in significant quantities in the USSR Navy. They were armed with the warships inherited after the partition of the Kriegsmarine.

After the captured ships were mastered by our crews, it was assumed that in the future they would be re-equipped with Soviet-style antiaircraft guns. 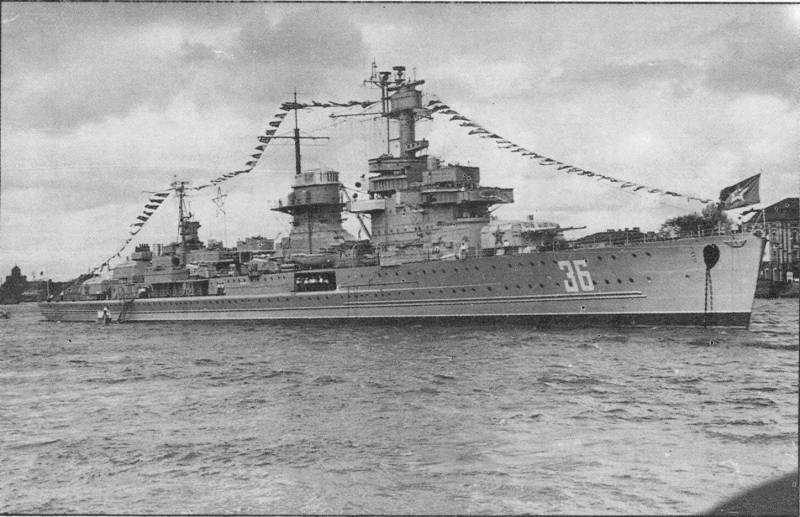 During the modernization carried out in 1948, the 37-mm anti-aircraft guns were replaced by Soviet machine guns of the same caliber. And instead of 20-mm automatic cannons, 12,7-mm machine guns were installed. 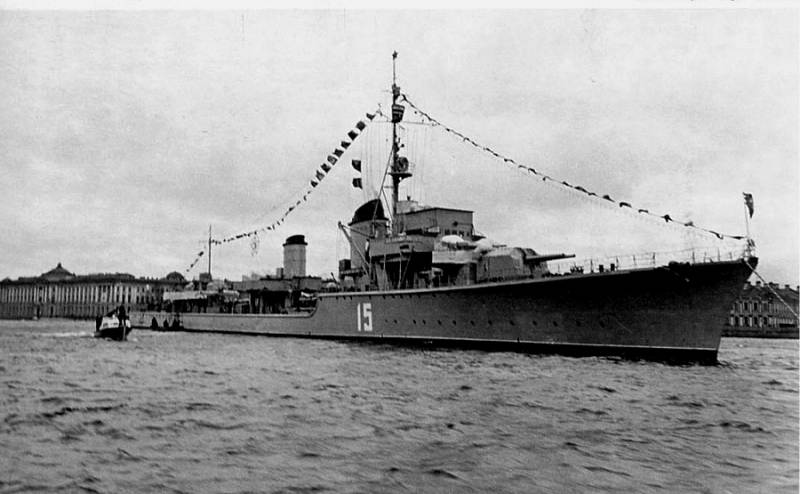 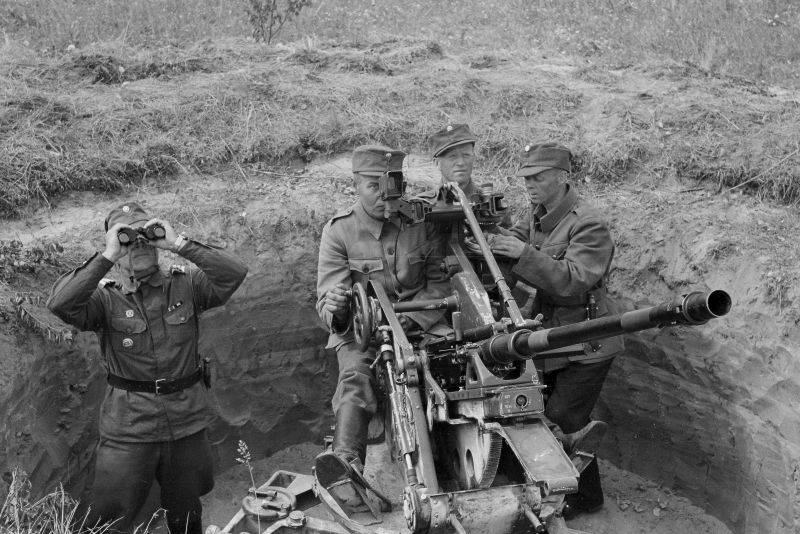 In Europe, they were in service in Bulgaria, Hungary, Holland, Denmark, Spain, Italy, Portugal, Poland, Romania, Czechoslovakia, Finland, France and Yugoslavia. In some of these countries, they operated until the early 1980s. 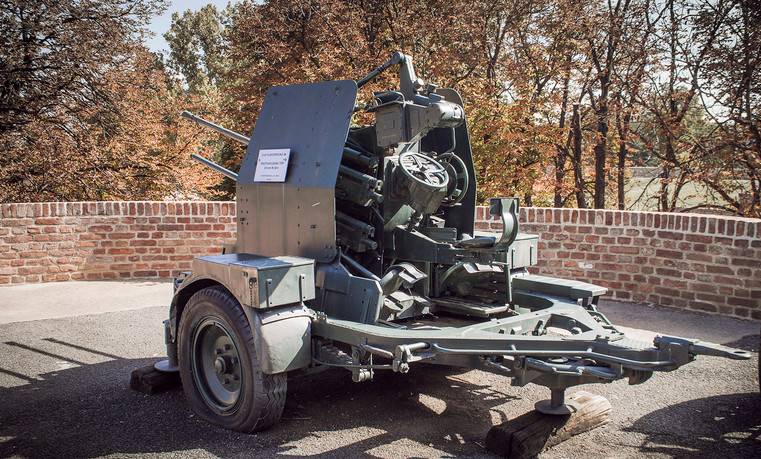 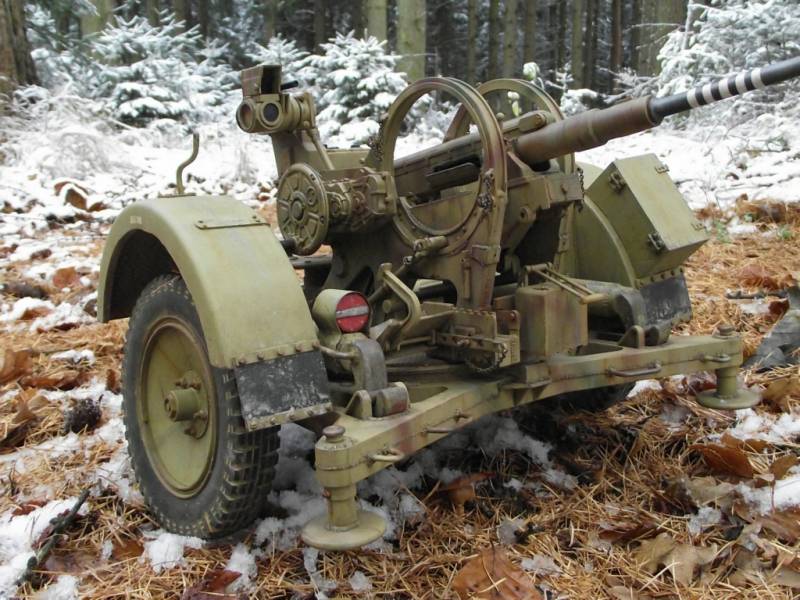 In the second half of the 30s, within the framework of military-technical cooperation with Germany (in exchange for raw materials), China received a large batch of 2,0 cm FlaK 30 anti-aircraft guns. 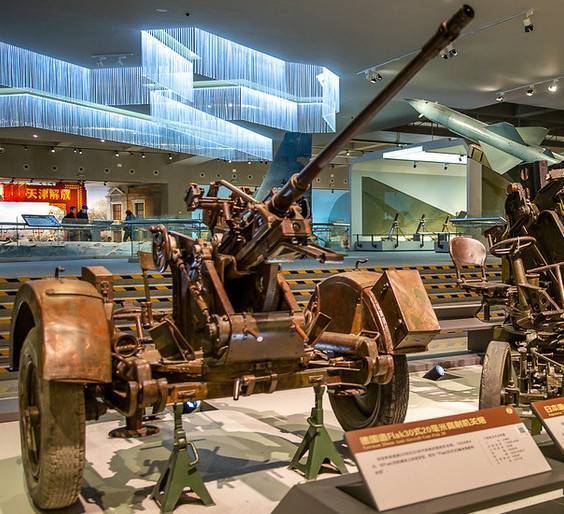 Subsequently, the US military noted the use of a 20-mm MZA during the hostilities on the Korean Peninsula.

There is reason to believe that the single-barreled Flak 30/38 and the quadruple Flakvierling 38, transferred by the Soviet Union, fought in Korea.