F-36 Kingsnake fighter concept: what could be a replacement for the F-16 and F-35

A few weeks ago, US Air Force Chief of Staff, General Churles K. Brown, spoke about the problems with the F-35 fighter and announced the possible creation of a new aircraft with different characteristics and features. In the wake of these statements, “alternative aviation magazine "Hush-Kit offers its own concept of a promising fighter. The vehicle bears the working designation F-36 Kingsnake and has a number of interesting features.

The new concept was created with the participation of experienced specialists from the British aviation industry. One of the authors of the project was Stephen McParlin, an aerodynamic specialist with 22 years of experience, who worked for RAE / DRA / DERA / QinetiQ. He was assisted by designer James Smith, who participated in the creation of many projects, including the Eurofighter Typhoon. The image of the plane was prepared by artist Andy Godfrey from Teasel Studio.

The purpose of the F-36 project was to determine the appearance of a promising fighter of the "4+" or "5-" generation, capable of conducting short-range and long-range missile combat. The aircraft must have a supersonic flight speed and a significant combat radius. Much attention is paid to economic and technological aspects? because of which it is proposed to create a new fighter.

The development of tactical aviation is disclosed by comparison with cars. The F-22 is identified with the Bugatti Chiron, and the F-35 with Ferrari. The promising F-36 should be analogous to the Nissan 300ZX, i.e. combine fairly high performance and lower cost.

It is noted that in the future, as the service continues and in the course of further development, the hypothetical F-36 can "overgrow" with various new elements, become heavier and turn into a "bomber truck". However, the authors of the concept propose not to pay attention to such prospects and consider the aircraft in its original form.

To speed up the development and reduce the cost of the program, a ten-point plan is proposed, affecting organizational and technical issues. So, it is proposed to choose for implementation a project that is not the most difficult and promising, but convenient for implementation. Terms of work can be shortened by eliminating full-fledged competition between developers - a contractor must be selected at an early stage. This approach would also remove the policy element and related disputes.

It is proposed to introduce the position of "King of the Luddites". This specialist must monitor the technological and organizational part of the project, and block the implementation of unreasonably bold and unworked solutions. This requires a strong-willed and unpleasant, but competent person. Finished technologies and components, if possible, should be simplified constructively or technologically. The production line should have the minimum required composition, and it should also be possible to quickly expand it, for example, to fulfill export orders. 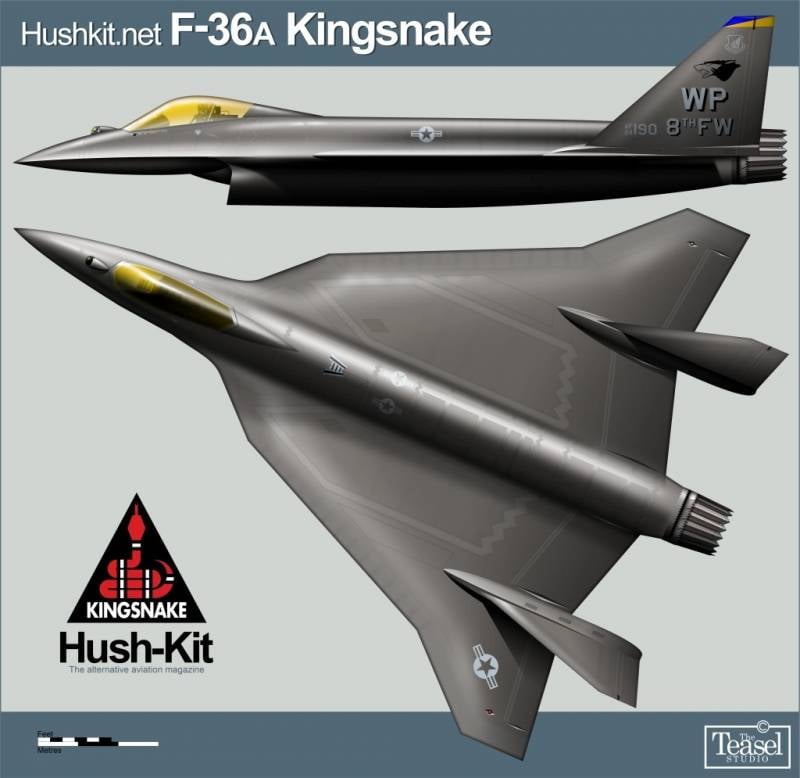 The airframe of the aircraft should be simple and have modernization potential. Stealth is no longer a priority. The design should use 3D printing and other promising, but mastered technologies. The aircraft must have a reserve of internal volumes and generated energy for further modernization. It is necessary to simplify radio-electronic equipment by reducing computing systems. The data must be transmitted to the ground complex, which will be able to process them and transmit ready-made information to the fighter for combat work.

The Hush-Kit does not exclude the need to build and test prototypes. In this case, the main purpose of testing should be to determine the reliability of machines. Other aircraft, available in large numbers, can also be used as flying laboratories for testing electronics or weapons.

The F-36 is offered as a tailless single-engine aircraft with a complex wing and a pair of slightly collapsed keels. Outwardly, it should resemble a 4th generation machine, which is due to the abandonment of the stealth priority. At the same time, sufficient internal volumes are provided for fuel and internal cargo compartments. The possibility of installing missiles and bombs under the wing remains.

The nose of the fuselage, including the cockpit and lower air intake, resembles the unit of the F-16 fighter. The F-16XL project also proposes to borrow some of the developments in the wing design. The F-36's planes should have a large surface area at moderate aspect ratio, and a kinked leading edge is proposed to improve performance in all intended modes.

One General Electric F110-GE-129 engine, taken from the F-15EX fighter, is proposed as a power plant. It is also possible to use the product F119 from the F-22 aircraft, but this requires resuming its production. The use of F119 engines will provide high flight performance and thrust vector control. In addition, the resumption of their production will simplify the further operation of the combatant F-22.

The basis of the sighting and navigation complex should be radar with AFAR type AN / APG-83 SABR, already used in the latest modifications of the F-16. A built-in optoelectronic station is not provided, but compatibility with sighting and observation suspended containers should be ensured. It is proposed to simplify the computing complex by transferring part of its tasks to ground control systems.

The cockpit equipment should combine the developments of the projects of different generations. It makes sense to use separate components from the F-35 and other machines. It is proposed to use a "glass cockpit" and a helmet-mounted target designation system. At the same time, it is necessary to get rid of the shortcomings identified during the operation of serial equipment. 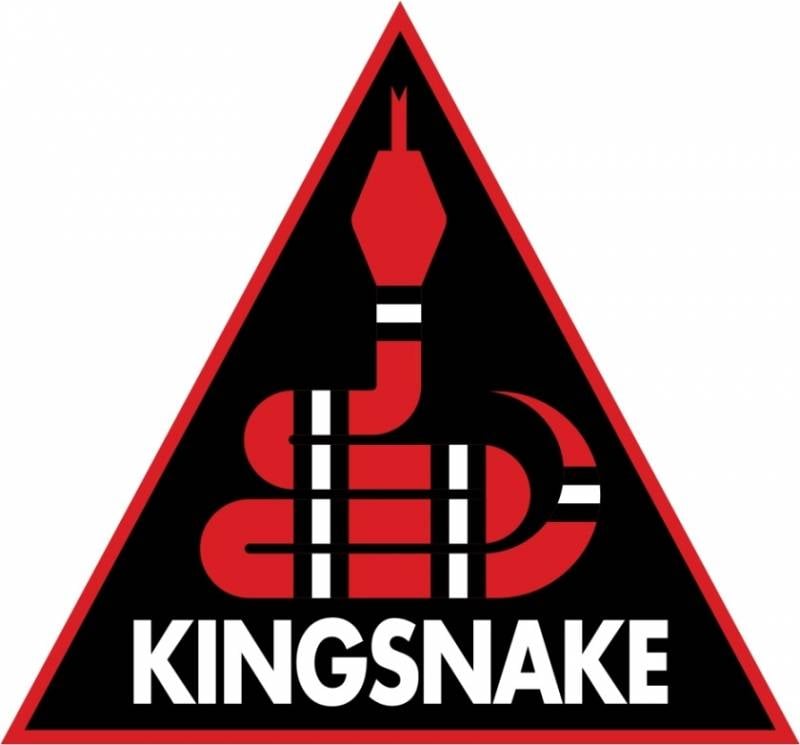 Despite advances in missile armaments, the F-36 should retain a built-in cannon. It is assumed that any aircraft replacing the F-16 will have to work on ground targets - in which case it needs its own artillery. In addition, not all potential customers are supportive of fighter-bombers without built-in weapons.

Missile and bomb weapons can be transported both in internal cargo compartments along the sides of the fuselage and under the wing. It is assumed that the F-36 will be able to use all existing American-made samples. In addition, the hypothetical aircraft of the future will have to use promising weapons of the next generations.

The concept of the F-36 Kingsnake fighter-bomber was created on its own initiative by a small online publication with the participation of specialists from the aviation industry. In fact, he is a fantasy on the topic and therefore has no real prospects. The actual aircraft to replace the F-16 and the F-35 add-on will be developed by other organizations based on customer requirements and based on their own experience.

However, despite its specific nature, the concept project from Hush-Kit is of certain interest. It offers an interesting way of solving an urgent problem using available tools and technologies, as well as using promising new approaches. Thus, the "project" F-36 not only solves technical problems, but also allows you to get rid of organizational and financial difficulties. This is especially important in the context of the complexity and high cost of modern aircraft.

Meanwhile, in the United States, preliminary research work on the topic of a promising aircraft, previously announced by General Brown, could begin. The Air Force Chief of Staff revealed some wishes for this project, which will be taken into account in the formation of technical specifications and in subsequent design. At the same time, the timing of the work remains unknown - as well as their result.

Most likely, the F-36 concept from Hush-Kit will not be the only attempt to predict the appearance of a promising fighter. The voiced requirements for such an aircraft are left large simply for assessments, forecasts, and even fantasies. Which of the proposed versions will most closely match the real project - time will tell.

Ctrl Enter
Noticed oshЫbku Highlight text and press. Ctrl + Enter
We are
How was created "Eurofighter"An-12 in Afghanistan
Military Reviewin Yandex News
Military Reviewin Google News
75 comments
Information
Dear reader, to leave comments on the publication, you must sign in.