The fate of the project A77 "Harpoon" 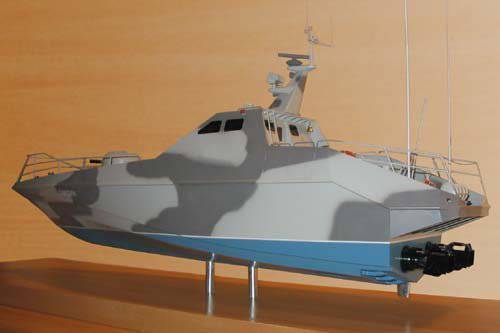 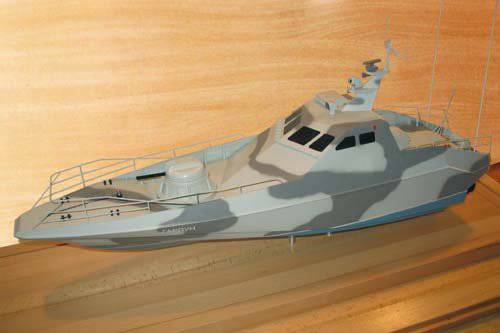 The existing border fleet of leading world powers, as experience has shown, is extremely ineffective in operating in real stormy conditions against small-sized maneuverable and high-speed targets. Efficiency is achieved through borderline interaction fleet and coastal helicopters. Highly specialized vessels for the fight against terrorism should perform the following tasks:
- release of captured ships:
- delivery of underwater assault group,
- the landing of the above-ground assault group,
- cover assault groups,
- assistance to victims,
- convoy of captured ships, terrorists to the base.
- patrolling the area of ​​responsibility in order to prevent terrorist operations at sea;
- stopping the delivery of smuggled goods;
- stopping the delivery of illegal immigrants.

Based on these tasks, the following requirements can be identified:
- minimum acceleration time to full speed,
- the minimum time of the reverse from full front to full reverse,
- high speed reverse,
- minimal flooding and splashing of the upper deck,
- the possibility of placing assault groups and special equipment,
- convenience of action of underwater and surface assault groups from the ship,
- ease of operation of the vessel.

The most promising project is the A-77 “Harpoon” project developed by Agat Design Bureau and built at the Vyborg Shipyard, tested on 2003-2004. In parallel, several generations of models were tested in the FSUE TsAGI basin in order to verify the original calculation methods and electronic simulation of the dynamics of movement aimed at optimizing the hydrodynamic complex of the gliding type, including the hull geometry, waterway parameters and the laws governing the system for stabilizing the angular coordinates of the model while moving on a regular excitement of a given intensity.

The following local technologies should be highlighted that will improve the performance of the boat and its effectiveness, including:
- hull geometry, providing an optimal combination of indicators of seaworthiness, maneuverability and inertia;
- Laws of management of the system of maintaining optimum trim and moderation of side and pitching;
- water propeller with a high-pressure pump and water intake, the geometry of which provides the maximum efficiency of the propeller in a wide range of speeds of the boat;
- system of optimization of centering along the length of the boat;
- a number of design solutions aimed at reducing the empty mass of the boat, increasing the service life of individual components, and increasing the overhaul period of the boat in operation.

Proceeding from the above, a proposal arises about the possibility of creating in one hull, deeply inter-design unifying a complete set, design, technical and technological solutions, two boats of the A77-4, A77-5 projects with the characteristics outlined in the table below, which also compares the TTX for comparison project A77 "Harpoon". 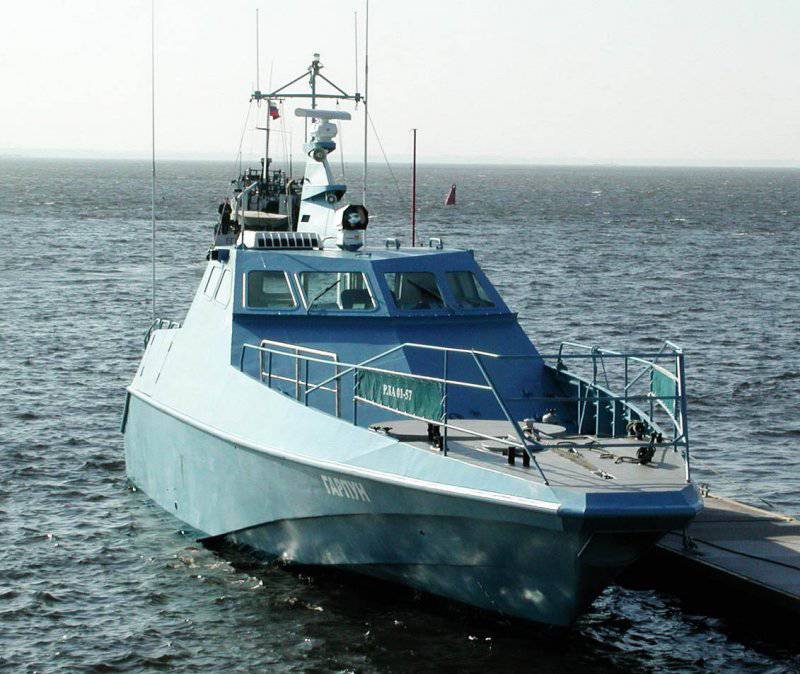 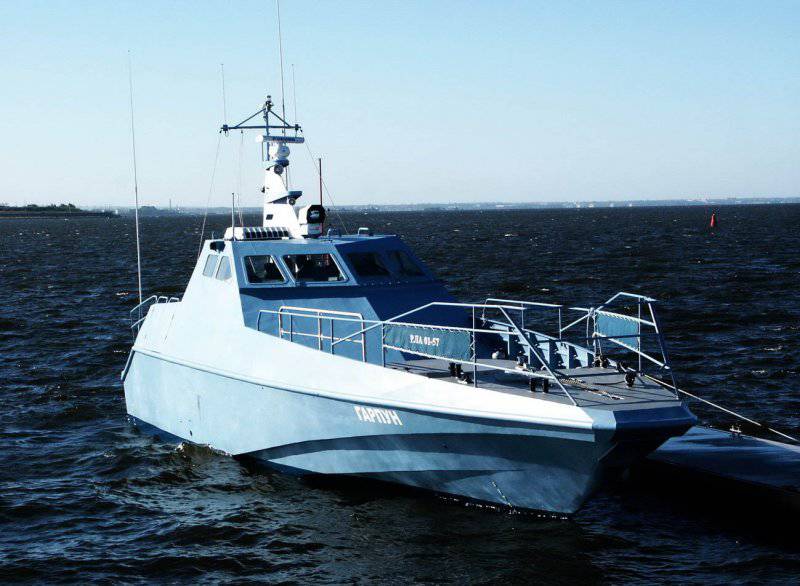 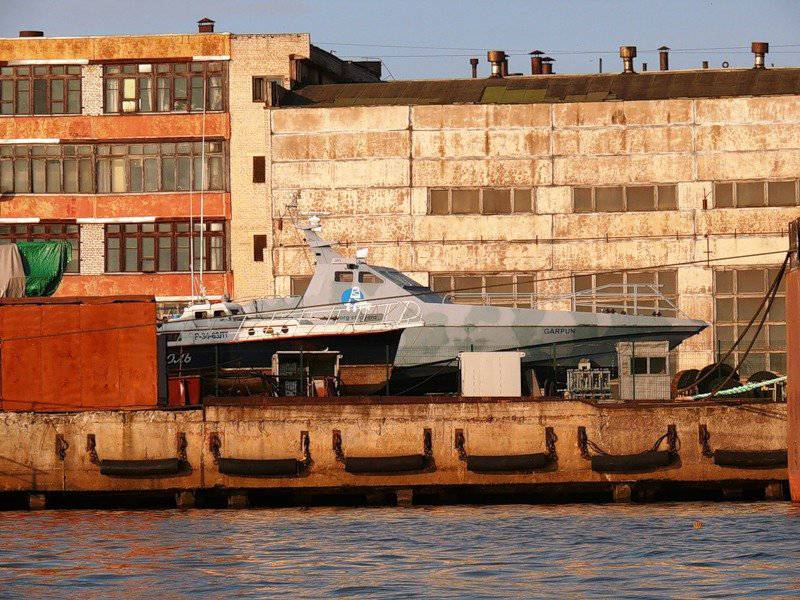 Comparison of the characteristics of boats shows that the A77-4 and A77-5 systems are significantly superior to the A77 in maneuvering and inertial characteristics, navigation range, autonomy, and possess the infrastructure necessary to perform the tasks previously listed.

TTH A77 "Harpoon" and its modifications 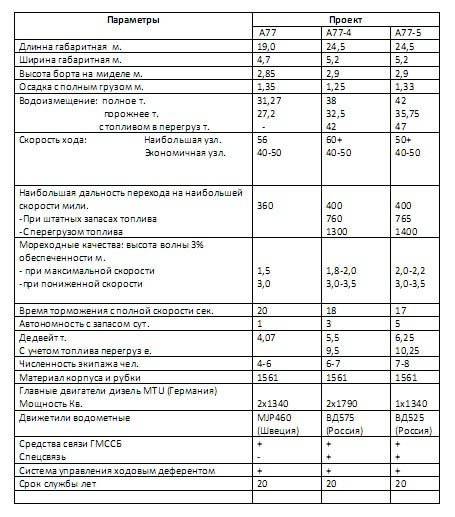 Additionally, we can say that a unique automation system was developed to control this boat, which has the following functions:

Automatic control of the bottom lifting force when gliding with the help of an interceptor system:

- ensuring the minimum resistance in the transitional mode (going to gliding);
- ensuring the maximum hydrodynamic quality by controlling the angle of attack depending on the speed of gliding;
- stabilization of the hull position due to roll and trim, including when exposed to waves;
- management of roll on the turn;
-the formation of a warning signal on the limiting values ​​of heel and trim, the formation of a team for emergency braking of the vessel in case of dangerous heel or trim.

Controlling the magnitude and direction of water cannons in various modes:
-synchronous tracking control of water jet nozzles, reverse valves and engine revolutions from the steering wheel and the handle in the wheelhouse;
- automated control of the direction and magnitude of the thrust force when maneuvering at low speeds. In this mode, the navigator sets the desired direction of movement using the joystick, and the desired speed of rotation - using the steering wheel. The automation system calculates tasks for nozzles, reverse flaps and engine revolutions necessary for movement in a given direction, including lateral movement of the vessel;
-automatic control of water jet nozzles in the mode of stabilization of a given course.

Management of vessel technical facilities:
-mapping the state of hatches and doors, remote control ventilation compartments;
- mapping of the volume of fuel and fresh water in tanks;
- display of the state of the power supply system, remote control of the generator switches;
-Display of the state of the hydraulic system, remote control of the hydraulic system pumps;
- signaling the presence of water in the compartments.
This project is the fastest ship in the world of this class. Only unfortunately, NATO countries show greater interest in it and are ready to place orders, unlike the Russian special services. For very unknown reasons, the FSB of the Russian Federation refused to accept this boat for service and today it remains in the number of 3 units and one model in the display case

For its own needs, Russia Agat Design Bureau has developed another boat project A125 Strela. Strongly simplified copy of A 77-4 "Harpoon"
Special purpose boat A125M 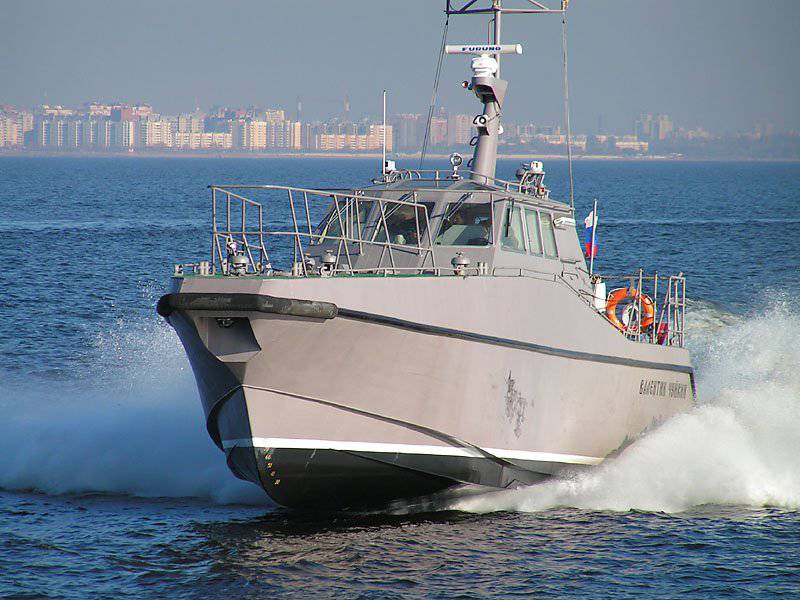 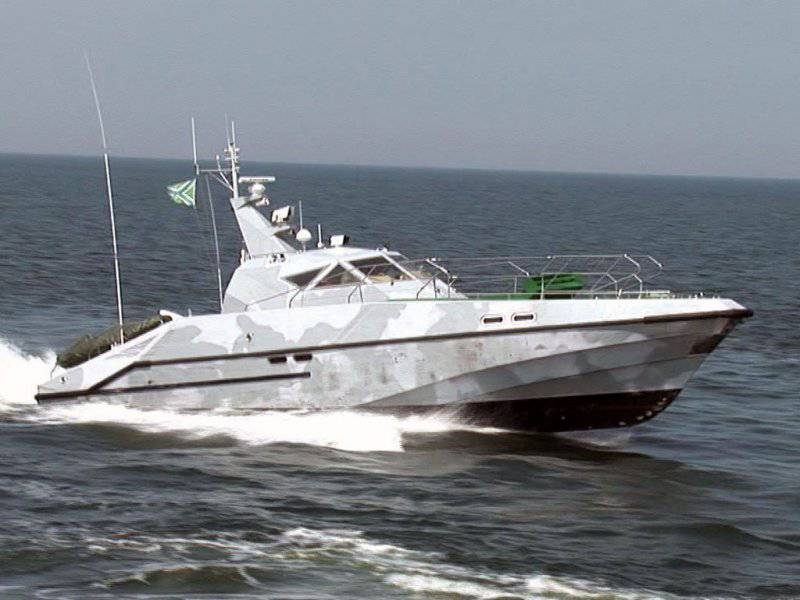 Purpose:
- Patrol and protection of state and customs borders,
-participation in search and rescue operations,
- interception and detention of vessels violating,
- implementation of customs control,
- protection of seaports and coastal engineering structures.
TTX project A125 and A125-1

Probably it's time to think about the means by which we will defend our borders with real boats or modelkas.