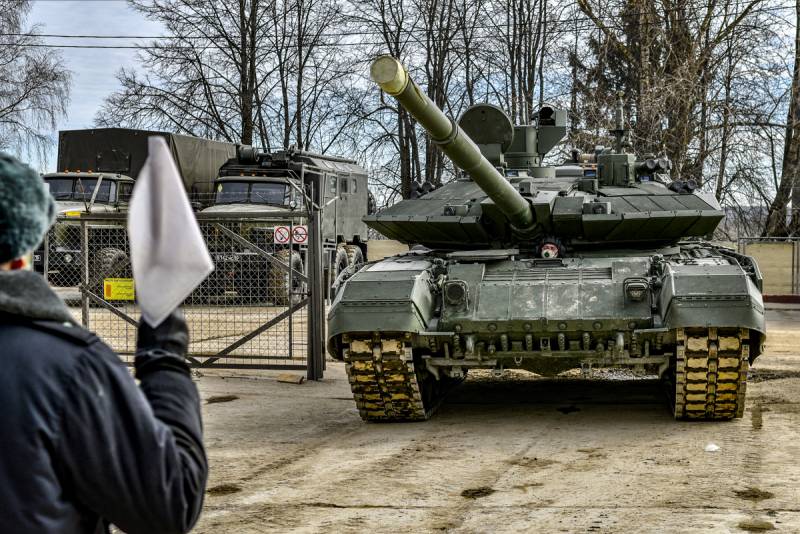 In 2017, the research and production corporation Uralvagonzavod received the first order from the Ministry of Defense for the construction of new tanks T-90M "Breakthrough" and the update of the available vehicles before this modification. In the future, new agreements were concluded, as well as deliveries of finished equipment were carried out. Another batch of modernized T-90Ms went to the customer the other day, showing that the program for updating the tank fleet is gaining momentum.

The first contract for the production of the T-90M MBT was signed at the Army-2017 forum. The Ministry of Defense ordered the delivery of 30 armored vehicles of this type, but the specifics of the production were not reported. Later, the press cited unofficial data, according to which all 30 tanks will be built from scratch. In addition, information was published about 10 new-built vehicles and 20 modernized T-90s from the presence of the army. Delivery of the ordered tanks was expected in 2018-19.

At Army-2018, the Ministry of Defense issued a number of new large contracts to the industry. NPK Uralvagonzavod received an order for another 30 T-90M tanks with the start of deliveries in 2019. It was not reported which tanks were discussed, new or modernized.

In 2019, again at the Army forum, the largest contract to date was signed. It provides for the modernization of 100 T-90A MBTs from the presence of armed forces to the state of the T-90M. According to media reports, another such order was planned to be issued in 2020, but this did not happen - or the contract was signed in a closed format. 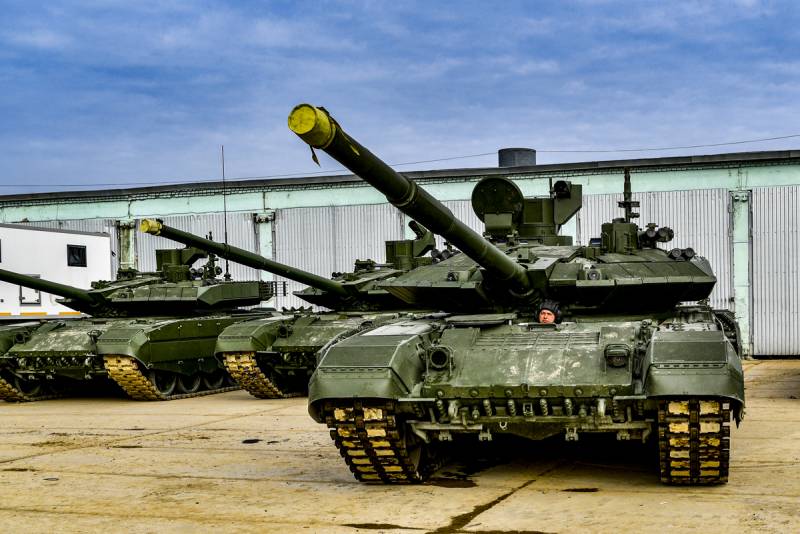 Thus, to date, 160 T-90M tanks have been contracted. This number includes up to several dozen new-built armored vehicles. Also, at least 100-110 T-90 (A) tanks taken from combat units will be repaired and modernized. News last year, we can expect the emergence of new large contracts, at least for dozens of tanks.

For unknown reasons, the construction and modernization of tanks fell behind the previously announced schedule. The first T-90Ms were expected by the end of 2018, but work on this batch of equipment was completed only next year. In September 2019, the command of the ground forces announced the start of deliveries of the T-90M, although it did not disclose details.

In March last year, it became known about the completion of the construction of the first batch of T-90M. This technique was sent to Moscow to participate in the Victory Parade. Then it was planned to transfer it into full operation in one of the parts.

A few weeks later, in mid-April, the Ministry of Defense announced the arrival of the T-90M in the combat unit. The 2nd Guards Taman Motorized Rifle Division received the first batch of such MBT. Further reports indicated that the Taman division had received new-built tanks. In November, the divisions handed over the second batch of equipment. The total number of delivered tanks was not officially announced. According to unofficial estimates, at least 20 units were received. 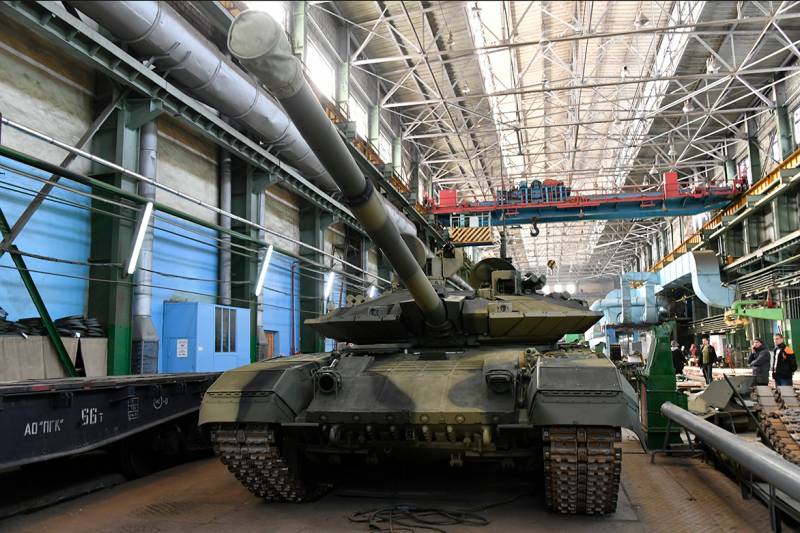 Tank of the last batch
Soon, a few days later, the media published plans to upgrade the cash T-90A to T-90M. It was argued that the first MBT for such an update would be taken from the park of the 7th military base in Gudauta and transferred to the contractor. In the future, the updated T-90M will have to enter the unnamed parts of the ZVO. Presumably, they are planned to be transferred to the 27th separate motorized rifle brigade (Moscow region) and the 6th separate tank brigade (Nizhny Novgorod region).

At the end of February, the Ministry of Defense revealed plans for rearmament for the current year. Delivery of a new batch of T-90M tanks of an unnamed size is expected this year. Some of these supplies are destined for the Kazan Tank School. However, the number and timing of the supply of tanks to the school were not named.

On March 1, Uralvagonzavod announced the completion of work on the next batch of tanks. She was handed over to the customer in the person of the military department and sent by rail to the place of service. The batch sizes are unknown, and the published photos show no more than two tanks at the same time. It can be assumed that these MBTs went to Kazan as part of the implementation of existing plans.

Thus, by now - over the past year - the industry has transferred to the troops three batches of armored vehicles with a total number of several dozen. This allows us to assume that NPK UVZ, despite the known delays and difficulties, coped with the implementation of the first order from 2017 and is ready to release new batches under the following contracts. In particular, now we can expect an increase in supply volumes due to the massive modernization of tanks from stock. 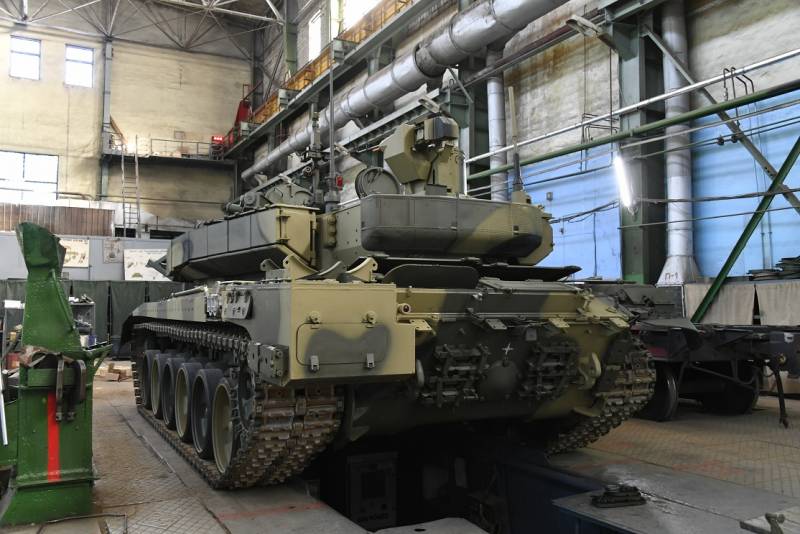 According to open data, at the moment in the combat units of our armed forces there are approx. 350 main tanks T-90 (A). Up to 200 armored vehicles of these types, mostly of old production, are in storage. With all its advantages, such a technique in the past could not become truly massive and crowd out other types of MBT.

There are contracts for the construction of several dozen new T-90M tanks - at least 30 units. In the future, new similar orders may appear. As a result of their implementation, the total number of armored vehicles of the T-90 family will increase, providing some increase in the combat qualities of the ground forces.

Also ordered the modernization of hundreds of cash T-90. Another contract for 100 modernized tanks could appear last year. These two orders will ensure the renewal and life extension of almost 40% of the total T-90 fleet, including vehicles in storage. The use of tanks from stock or from storage will allow not only to carry out the necessary renovation, but also to reduce the time and cost of the work carried out in comparison with the construction of new equipment.

The Ministry of Defense has not yet disclosed plans for further work, but it can be expected that in the future there will be new orders for the production of new T-90Ms and / or the modernization of existing tanks. Due to this, it will be possible to again increase the total number of T-90s of all modifications, as well as to increase the share of modern T-90Ms. However, it will take several years to complete such work, and it is unlikely that they will be completed before the middle of the decade. 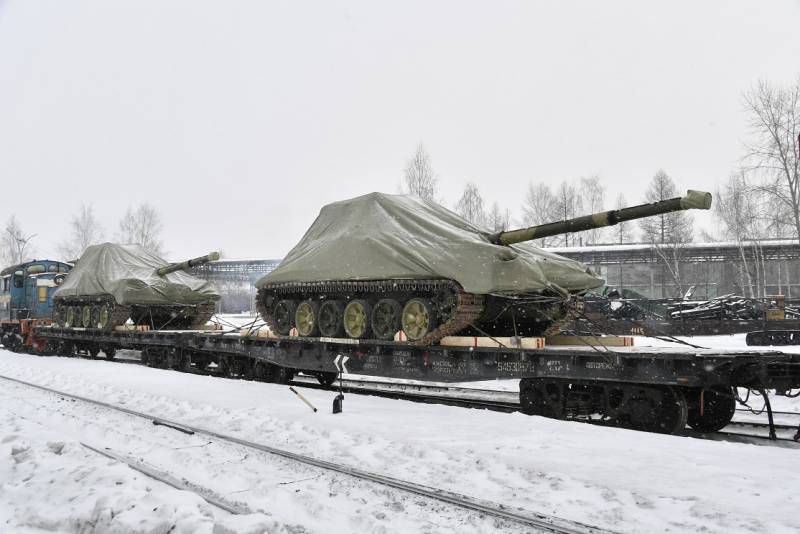 It is easy to see that in the medium term, the Russian army and industry by joint efforts can modernize at least half of the entire T-90 fleet, incl. equipment in storage. You can offer more daring predictions about the complete re-equipment of combat units' equipment. It should be remembered that in parallel, the production of the upgraded MBT T72B3 and T-80BVM continues, which also has a positive effect on the state of tank units.

According to the Ministry of Defense and Uralvagonzavod, the modernized T-90M Proryv is superior in combat effectiveness to the vehicles of previous modifications, which is achieved by replacing a number of key units. For reasons of economy, other components and structural elements remain unchanged. So, the ready-made hull and tower are used, but the placement of the internal units changes and new elements appear.

The upgraded tank receives an increased power engine, an auxiliary power unit and new controls. It is possible to replace the 2A46 gun with a new 2A82. A modern fire control system is installed, compatibility with modern 125-mm rounds is ensured. Provides a remotely controlled weapon station with a machine gun. The complex of means of navigation and communication is undergoing renewal.

During the tests, the experienced T-90M tanks confirmed the growth of the main characteristics and combat effectiveness in general. Since last year, the serial MBTs of this model have been going to the troops and allow combat units to receive all the offered capabilities and increase their combat effectiveness. In the near future, the number and share of such equipment will constantly grow - with understandable positive consequences for the army as a whole.

Ctrl Enter
Noticed oshЫbku Highlight text and press. Ctrl + Enter
We are
T-90M: a fast past and a great futureModernization of MBT with the aim of increasing their combat effectiveness in urban environments
Military Reviewin Yandex News
Military Reviewin Google News
41 comment
Information
Dear reader, to leave comments on the publication, you must sign in.