Ballad of "Winchester": steps to perfection

The immediate predecessor of the M1894 Winchester - the M1886 Winchester chambered for the .45-70 caliber

“Here even the blind will understand what the matter is,” he said.
This bullet with a soft nose and a steel shirt
and yours with a soft nose and a steel shirt.
Here thirty - thirty;
and yours is thirty - thirty.
This is the factory D. and T.,
and yours - factory D. and T.
Let's go ashore and see
how did you arrange everything. "
("Smoke Bellew" Jack London)
Weapon and firms. Let's start with the fact that once again we recall that ... gunsmith John Mosex Browning was a very talented designer and, which is also very important, he never sat idle.

No sooner had his M1885 rifle go into production, than after it he designed another, truly iconic model of the M1886 "Winchester". I must say that after the release of the M1873 "Winchester", it was soon followed by the M1876 model, which differed only in that it became the first model of this company's carbine, which could fire powerful rifle cartridges with a central ignition of .45-75 caliber.

This cartridge was very similar to the army .45-70 Government, so there is a clear purpose to seduce the American army with this model. Moreover, the difference consisted only in a heavier receiver, which was required to withstand the high pressure developed by the rifle cartridge at the time of the shot.

The 1876 model was also produced for .40-60, .45-60 and .50-95 Express cartridges. This model has gained particular popularity among bison hunters and it is clear why - due to its exceptional destructive power.

However, the cartridges in this rifle were old, filled with black powder! 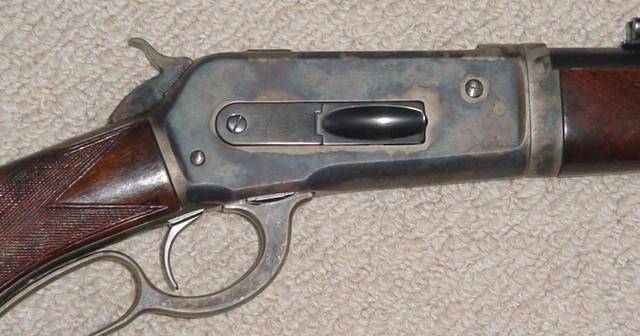 The receiver of the M1886 rifle. Its differences from earlier models are immediately noticeable. On the receiver there are no removable "cheeks" and a tide for mounting the reload lever. The box itself is solid-milled and open from above.

Therefore, he had to redo the design of its mechanism, which had not changed since 1873, and at the same time completely change the shutter locking system.

However, the cartridges for this rifle were still filled with black powder. However, the strength of both the barrel and its bolt were such that in 1903 the M1886 barrels were bored for .33 WCF (8,6 mm) smokeless powder cartridges. 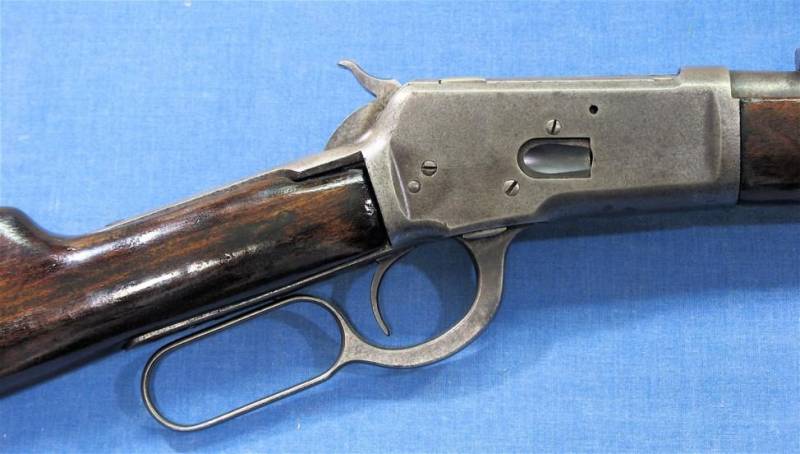 The receiver of the M1992 rifle of the year practically did not differ from the previous sample.

The next step on the way to the most perfect "Winchester" was the model developed by Browning in 1892. Moreover, when the company asked him to make an improved version of the M1886, capable of competing with a recent model of a similar rifle from the Marlin firm, Browning said that he would do the job in less than a month. And if he is late, he will not take money from the company. 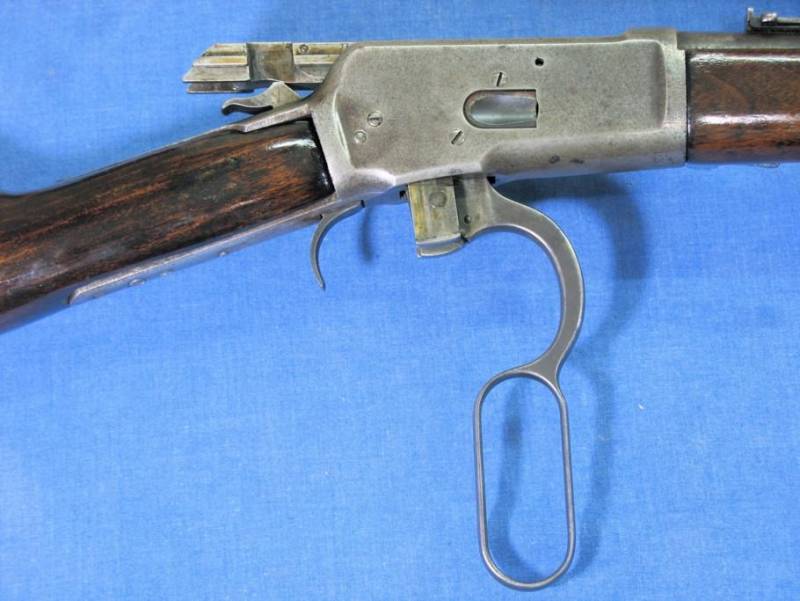 But in this photo you can clearly see the M1892 shutter, the ejector spring located on top of it and two protrusions of the U-shaped locking wedge that hold the shutter in the locked position.
The great popularity of this model is evidenced by the fact that the M1892 was used by Admiral Robert E. Peary during his travels to the North Pole.

And Secretary of War Patrick Hurley on December 13, 1932, the Winchester firm donated the millionth rifle. Famed Amazon explorer Percy Fawcett was also armed with this rifle.

And the British Royal Navy used 21 copies of this "Winchester" during the First World War. Interestingly, at the very beginning of the same World War I, the Royal Flying Corps purchased model 000 rifles chambered for .1886-45 Sharps (90 mm), equipped with special incendiary bullets designed to ignite hydrogen in German airships. 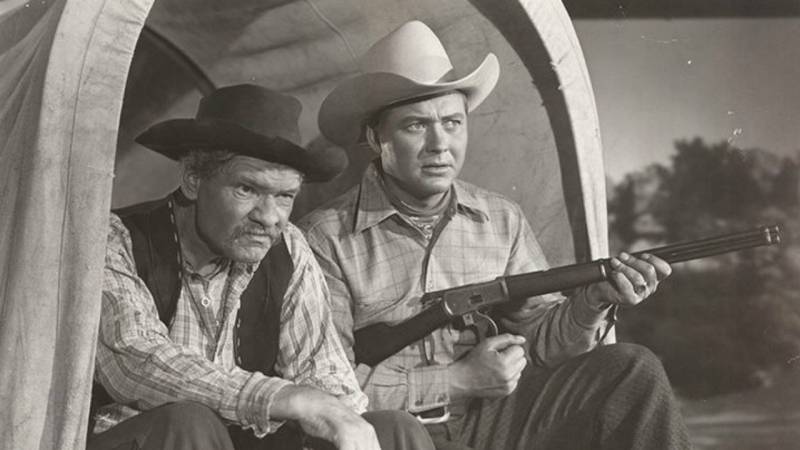 A still from the 1948 movie "Burning California", where the locking wedge on the M1892 bracket-lever is very clearly visible.
The Garat, Anitua & Sia company of Eibar in Spain copied the 1892 model.

And began to produce under the name "Tiger" chambered for .44 Largo (.44-40 Winchester) with a 22-inch barrel, 12-cartridge magazine and a saddle ring, and many rifles were equipped with swivels.

Well, in total, from 1915 to 1937, 1 of these rifles were produced. Since 034, they have been issued to various Spanish paramilitaries, including the Civil Guard. "Tigers" in the 687s were sold in large numbers to the countries of South America and even to the United States. 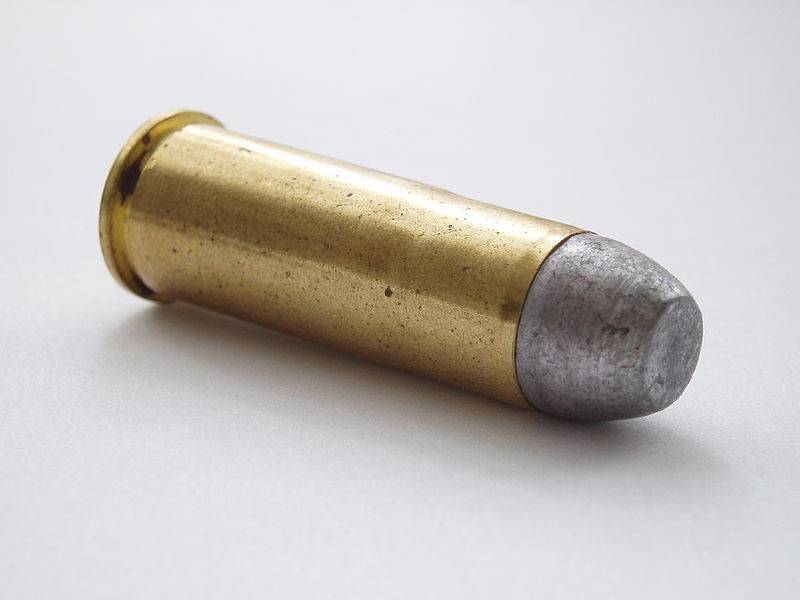 But firms such as Browning, Chiappa, and then Amadeo Rossi in Brazil and Winchester's subsidiary in Japan continued to produce it. 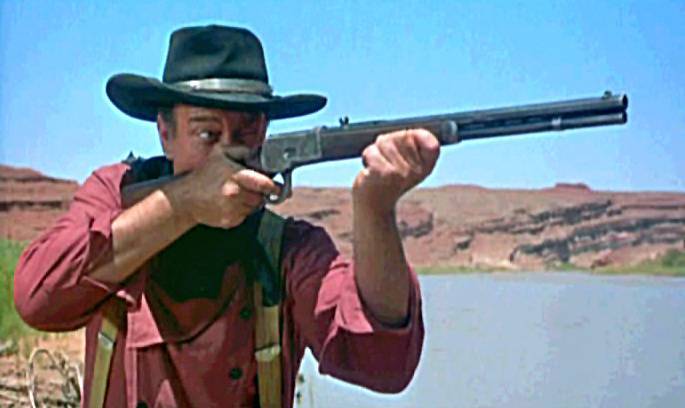 A still from the 1956 movie "The Searchers". In the hands of John Wayne just M1892. He can often be seen in films about 1876. But unhistoricality is a common flaw in modern cinema. There are excellent examples of the opposite, though.

"The most advanced lever action rifle."
And this is most likely true. Because they were produced the most of all - a total of 7,5 million copies.

One M1894 rifle is on display at the Metropolitan Museum of Art in the weapons and armor section. This rifle, engraved and inlaid in gold and platinum, ranks among the most ornate Winchester lever action shotguns of the early XNUMXth century. 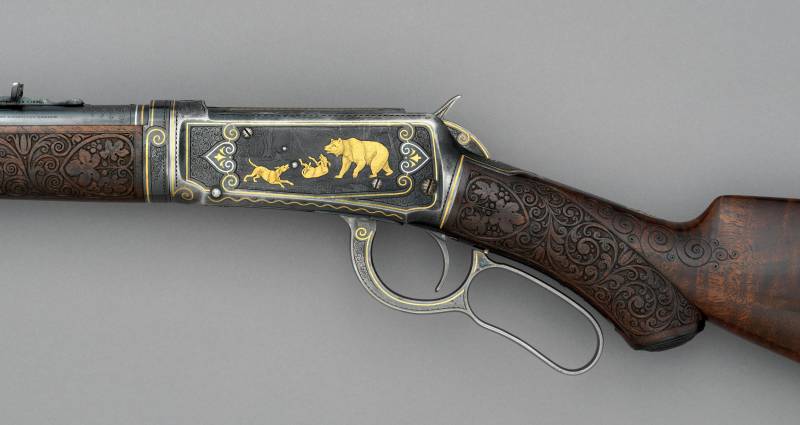 The blued receiver, lever and rifle barrel are decorated with swirls and inlaid with gold and platinum wire, framing three gold-encrusted and engraved scenes depicting a mountain lion, deer and bear fighting two dogs. The butt and foreline are embellished with floral carvings. These decorations reproduce designs from the Winchester Arms Company Highly Embellished Arms catalog published in 1897. Highly Embellished Arms is the first to systematize factory-made Winchesters for its line of rifles, offering customers ten receiver designs and eight stock designs at varying prices. These include play scenes surrounded by swirls and foliage motifs combined with swirls. The design was primarily developed by the Winchester factory engravers Herman Leslie Ulrich and William E. Stokes. This rifle has a Style # 1 engraving and A style applied carving (the most expensive options available), replicating the decorations on the very first rifle featured in this catalog. Materials: steel, gold, platinum, silver, wood (walnut), leather, textiles. Dimensions: length 101,6 cm; barrel length 21 inches (53,3 cm); caliber 0,30 inches (7,62 mm). Weight 3114 g
First of all, we note that the M1894 was the first American magazine rifle in which cartridges with smokeless powder were to be used.

Initially, it was also created for black powder cartridges: .32-40 Winchester and .38-55 Winchester. However, the Winchester company at this time was already engaged in the development of the .30-30 Winchester or .30 WCF (Winchester Centerfire - that is, the centerfire cartridge), which eventually became synonymous with the 1894 model itself.

The cartridge allowed, with a smaller caliber of 7,85 mm, to have an muzzle velocity of 759 m / s, which was unrealistic for rifles that fired black powder cartridges. True, the receiver had to be lengthened. Because the sleeves of the new smokeless powder cartridges were significantly longer than the old ones. 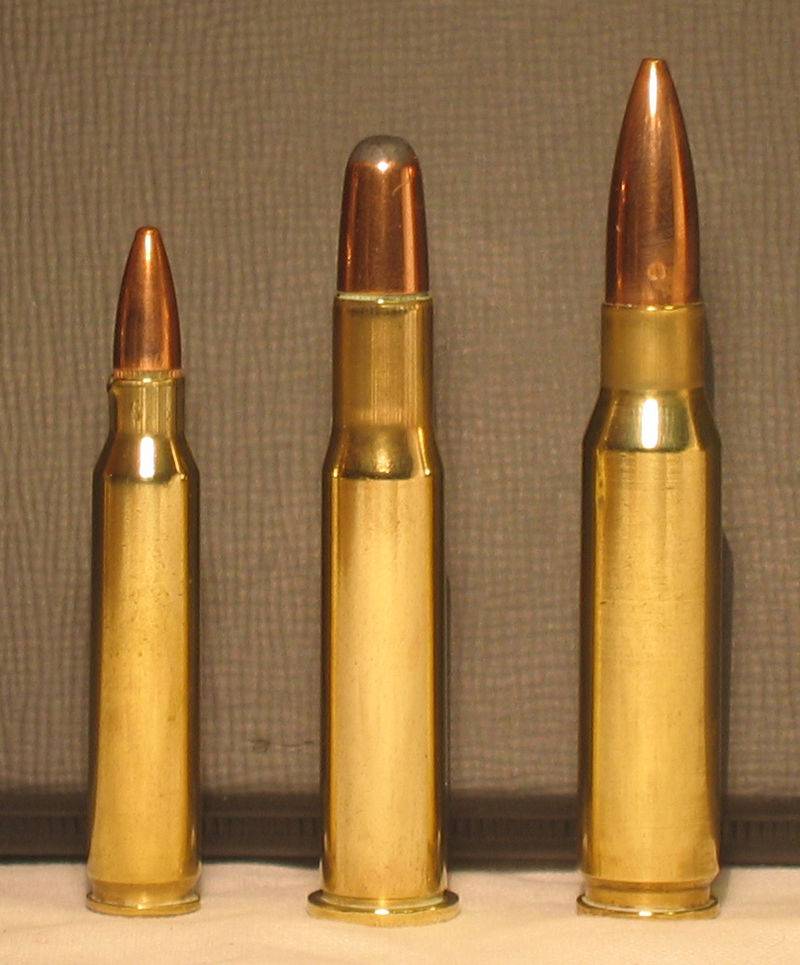 Cartridges from left to right: 5.56x45NATO, .30-30 Winchester or .30 WCF, and .308 Winchester
The combination of the firepower of the Model 1894 with its compact, lightweight (3,1 kg) and easy-to-carry design of the gun itself made it a very popular rifle among American hunters. Especially those that hunted white-tailed deer in the dense forests of the eastern United States.

And it was not for nothing that it was the first rifle sold in more than 7 copies. Moreover, in 000 the Winchester company presented the millionth model of 000 to President Calvin Coolidge. The $ 1894 ½ million was donated to President Harry Truman on May 1927, 1. And the two-millionth rifle in 8 was given to President Dwight D. Eisenhower. 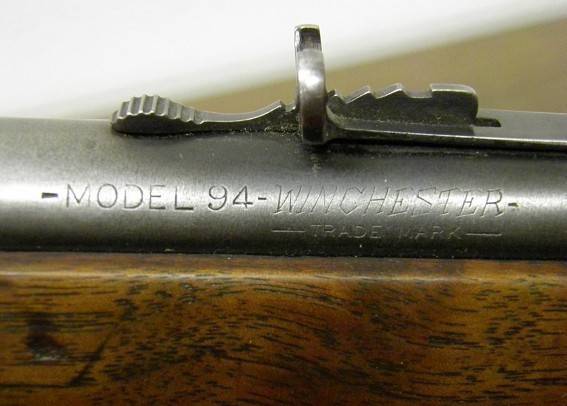 M1894 rifle scope chambered for .25-35 WCF
During World War I, the US government purchased 1800 M1894 rifles with 50 .000-30 rounds of ammunition for the US Army Liaison Corps personnel stationed in the Pacific Northwest, in order to prevent a strike from workers from causing delays in the production of Sitka spruce lumber. for the production of fuselages and wings of military aircraft.

France followed the example of the British and also bought 15100 carbines with belt swivels on the left side of the stock and barrel and a metric rifle scope. These carbines were issued to motorcyclist couriers, gunners, railway personnel and some balloon units. Samples captured by German forces were designated Gewehr 248 (e).

On the M1894, the locking frame was made differently than on the M1892. Here the shutter just rested against it and that's it. A round "target" on the plate served to hit the trigger, and in turn transmitted the blow to the striker.
But in World War II, "Winchester" M1894 was used by Canadian rangers on the Pacific coast, which were supposed to protect the west coast of Canada from a possible Japanese invasion. 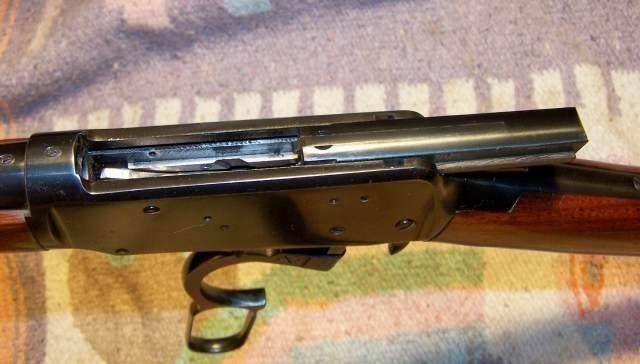 But, as was the case with the M1892 and M1886 models, the price of older rifles only increased from this. And then something happened that should have happened.

Since there were fewer long cartridges in the under-barrel magazine (7–8 versus 12–15 in the 1973 Winchester), the M1894 model was also produced for short revolving cartridges. So the usual tubular magazine, as before, began to hold from 9 to 13 rounds.

"Winchester" М1894 in the cinema: "Among the kites" - a 1964 film. Stuart Granger (Shetterhand) holds just one of the models of this rifle.

The design of the M1894 was significantly stronger than the 1866, 1873, and 1876 models based on the Benjamin Henry system. It can be fired with any modern high pressure revolving cartridges. For example, such as .44 Magnum.

Carbine produced by the company "Chiappa" M1892 ("Bounty Hunter"), "Mare's leg" with a holster. It has a 12-inch round barrel chambered for the .44 Magnum cartridge. Equipped with an enlarged cocking lever loop and a seat ring on the left receiver. Walnut stock and forend. Modeled after the carbine used by Steve McQueen on the late 50s television show Wanted: Dead or Alive.
The production of М1894 in the USA ceased in 2006.

At this time, there were 14 versions of the M1894 in the company's catalog.

Well, in 2010, Winchester Repeating Arms re-released the 1894 rifle in two "limited edition" models in honor of the 200th anniversary of Oliver F. Winchester, who was born in New England in 1810.

Author:
Vyacheslav Shpakovsky
Articles from this series:
The ballad about "Winchester": a weapon for the Terminator and not only ...

Ctrl Enter
Noticed oshЫbku Highlight text and press. Ctrl + Enter
We are
The ballad about the famous "Winchester": new cartridges, new weapons ...What should be a modern sniper (part of 1)
Military Reviewin Yandex News
Military Reviewin Google News
85 comments
Information
Dear reader, to leave comments on the publication, you must sign in.