August 24 2012
13
Throughout its stories aviation chasing high speeds. Despite a number of features of the combat work of a particular class of aircraft, speed remained the cornerstone of the development of all aviation. The air battles of World War II showed that such priorities were reasonable and correct. At the same time, in the case of fighters, high speed sometimes turned into a loss of maneuverability. However, this price has traditionally been considered normal and continued to increase engine power and improve aerodynamics.

One of the most popular and original ways of short-term forcing of the engine was water injection. The fluid sprayed in front of the intake manifold cools the engine parts due to its relatively low temperature, which makes it possible to take it to high speed without the risk of overheating and failure. Over time, an alternative to water appeared - various mixtures. Most often, water was mixed with alcohols, ethyl or methyl. In particular, it is the latter mixture that was used in the German system MW 50 (Methanol-Wasser - Methanol-water; the figure indicates the percentage of methyl alcohol). Methanol vodka injection was fairly efficient: the Daimler Benz DB605AM engine, mounted on Messerschmitt Bf-109G6 fighter jets, increased its power by more than two hundred horsepower when the mixture was injected. At an altitude of about a thousand meters, this gave an increase in maximum speed of about 50 km / h. For the increase in power, it was necessary to pay with considerably increased fuel consumption, as well as a decrease in the engine resource. However, there was a war and such losses were considered acceptable.

A similar system a little later helped the Fokke-Wulf Ta-152H fighter to become the fastest Luftwaffe aircraft. True, this time the equipment used was GM-1, which injected nitric oxide (I) into the engine (nitrous oxide, laughing gas). Because of the well-known peculiarity of the gas used, GM-1 was nicknamed Haha-Gerat (“Ha-Ha apparatus”). Unlike the MW 50, the “funny” equipment was designed for use at high altitudes. Like the methanol / water mixture, nitrous oxide cooled the engine. At the same time, the gas also saturated the fuel mixture with oxygen, which significantly increased the completeness of combustion and, as a result, the power of the engine. The Jumo 213E1 engine, with the injection of laughing gas, additionally gained up to three hundred horsepower and developed horsepower of the order of 2000-2050 hp. During one of the flights, the Ta-152H fighter reached a speed of 755 km / h with an altitude of about 12,5 kilometers. Until the very end of the war, Focke-Wulf did not stop working to increase the power of its aircraft engines, however, due to a number of circumstances, most technical proposals could not make it even into the design stage, not to mention mass production. As a matter of fact, the MW 50 and GM-1 devices were the only mass German short-term engine boost systems. As for the Ta-152H fighters, the total number of these aircraft did not exceed a few hundred, and most of them were destroyed or captured by the enemy before the Luftwaffe was put into operation.

At the beginning of the Second World Nazi Germany had enough modern technology to create a winged technique, not inferior to foreign competitors. However, by the end of 1944, the situation on all European fronts was very unfavorable for the Germans. To protect against enemy bombers, a high-speed, high-altitude, and most importantly, cheap fighter was required. I had to go back to the pre-war projects, even modifying them. 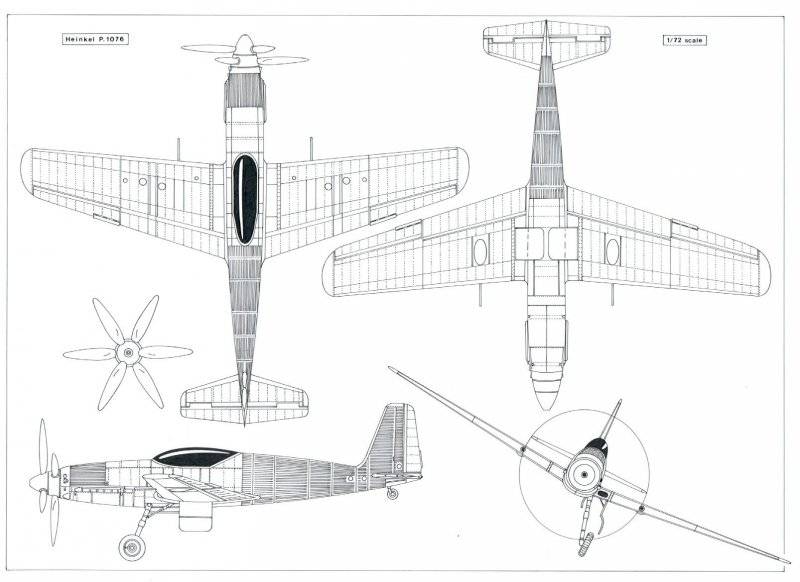 At the very beginning of 1945, the Heinkel firm received an order to develop a new fighter that meets the stringent requirements of the time. Without hesitation, the designers took from his archive the documentation for the He-100 project and studied it carefully. The project is a promising cheap high-speed fighter designated index P. 1076. This fighter was created exactly with the same goals, which meant the old project. The first way to increase the speed was the engine. The requirement for low cost fighter left no doubt about the type of motor used. There could be no talk of jet engines. After some deliberation, Daimler Benz DB603LM was chosen, developing power up to 2100 hp. In this case, the engine was supposed to be equipped with a gearbox and two coaxial three-bladed screws.

The second way to achieve high speeds entailed several innovations in aerodynamics. So, the old He-100 project borrowed the engine cooling system. On it, the cooling of the engine was the responsibility of the surface-evaporative scheme: instead of a conventional radiator with tubes, it had special panels designed for placement on planes, sides of the fuselage, or keel. Inside the panels were installed pipes for pumping coolant. It was assumed that the cooling of water or oil will be carried out by blowing the panel with a counter flow. It is noteworthy that the panel with tubes, in contrast to the standard radiator, has little resistance and almost does not interfere with the increase in speed. It is worth noting a serious minus the surface-evaporative cooling system. Panels with internal tubes should have a sufficiently large area. As a result, they become particularly susceptible to bullets, shells and shrapnel. Nevertheless, the current situation on the fronts demanded quick and simple solutions, even to the detriment of survivability. 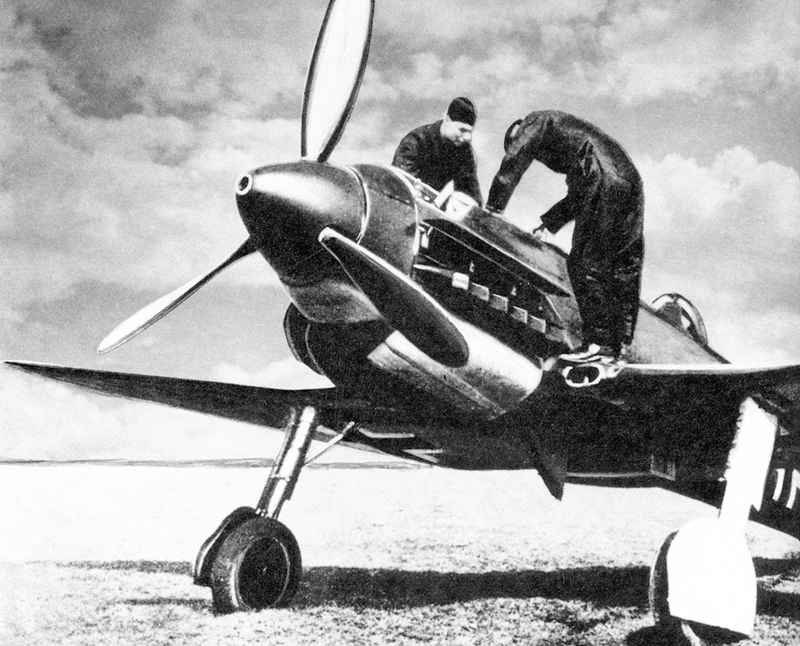 Finally, in trying to improve aerodynamics, it came to ensuring good maneuverability, which the previous German record-holders could not boast of. To do this, they decided to apply the latest know-how of German aerodynamics - the backward swept wing. The technologies of that time did not allow the sweep to be large, but even with a little more than six degrees, as shown in the wind tunnels, it was enough to significantly improve the design characteristics. The combination of the characteristics of the future aircraft allowed to equip it with serious weapons. There was enough space in the forward fuselage to accommodate one 30-mm gun of the MK-108 type and two 20-mm automatic guns. The flight characteristics of the P.1076 promised to be high: the speed of about 850 kilometers per hour and the practical ceiling of more than ten thousand meters.

Project P.1076 started too late. Just a few months after the order for the development of the aircraft, the troops of the Soviet Union and other countries of the anti-Hitler coalition crossed the pre-war border of Germany. At a time when the commanders of the opposing countries signed the act of surrender of the Third Reich, the engineers at Heinkel were just beginning to prepare documentation for the assembly of a prototype P.1076. Naturally, all papers and drawings were not collected in full, and the plane, in turn, was not built.

"Defender of the house" Messerschmitt

The most successful high-speed fighters in Germany were developed by the company Messerschmitt. They, as always happens, had shortcomings, but they were almost the only bold projects that came to any kind of mass production. The first fighter in the air was the Me-262, equipped with two turbojet engines. During the tests, the maximum speed in 850 km / h was reached. For the first half of the forties, it was excellent, but still not enough for some tasks.

At the end of 44 and the beginning of 45, the German command was preoccupied with the Heimatschutzer project (Defender of the House). It was planned to create a relatively simple and inexpensive aircraft with a rocket engine, which could quickly reach the lines of interception, attack enemy bombers, and at least quickly leave the response attack. The company Willy Messerschmitt proposed the project Me-262C1a. It differed from the original Me-262A by the presence of the Walter HWK 509 liquid propellant rocket engine in 1700 kgf. Next to it, an 600-liter C-fuel tank was installed, a T-fuel tank of 900 liters was placed in the nose of the aircraft. It was assumed that the fighter pilot, having lifted the plane into the air, had to pick up a certain speed and altitude, then launch the rocket engine. An increase in the aircraft's thrust-to-weight ratio would help to reach the required height at which the intercepted targets would fly much faster.

An additional engine and fuel for it entailed an increase in take-off mass. The normal weight of the refilled "Defender of the House" from Messerschmitt was at the level of the maximum mass of the original Me-262A. Because of this, for the takeoff, the plane required 600 meters of the runway - significantly more than before the finalization. 27 February 1945, the pilot G. Lindner, first flew Me-262C1a. Due to the increase in take-off weight, the plane went up hard and reluctantly. After turning on the rocket engine, the behavior of the Defender changed, and he quickly went up. As an experiment in the following flights, the rocket engine was switched on even before separation from the strip. In this case, the fuel reserve, designed for three minutes of engine operation, was enough to climb at least eight kilometers. After another one and a half to two minutes, the speeding plane climbed to 12.

The next Me-262A fighter was converted into the Me-262C2b version. It installed two special combined engine model BMW 003R. They consisted of a “spark” from the turbojet BMW 003A (thrust 800 kgf) and rocket BMW HWK 718 (1225 kgf). In March, the first and last flight of this aircraft took place on 45; K. Baur was in the cockpit. Typing speed around 150-160 km / h, the pilot turned on the rocket engines. After a few seconds, the pilot had to urgently remove the chassis and flaps - so quickly grew speed. When the tanks ran out of fuel and oxidizer, the plane was at an altitude of more than seven thousand meters. By inertia, the plane gained another kilometer of altitude. This climb took a little more than a minute and a half.

The second variant of the Defender of the House was better than the first, but still it did not remain without flaws. Therefore, the next experimental aircraft Me-262C3 was again equipped with the new engine - Walter R II-211 / 3 with a kgN load 1700. For ease of maintenance and simplify the design of the engine mounted on the suspension under the fuselage. Near secured tanks for fuel and oxidizer. The engine and tanks could be fired, while the first one fell by parachute and could be used again. The original location of the engine and tanks led to unexpected trouble. First, in the horizontal position of the aircraft, the tanks were slightly lower than the engine. Secondly, flexible fuel lines could crumple under the influence of the incident flow and thereby disrupt the fuel supply to the engine. It took several weeks to solve the layout problem. Work on the Defender of the House ended a few days before the end of the war. The third experimental plane did not have time to fly.