Bayonets in battle: yesterday and today ... 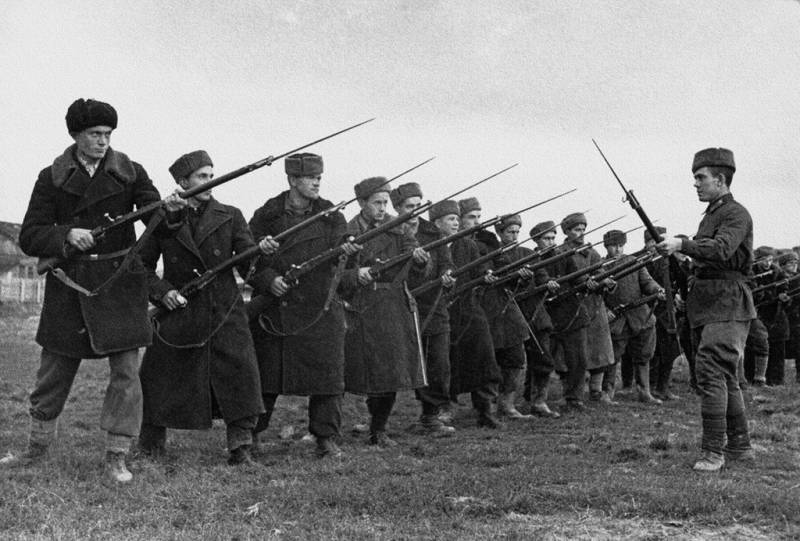 In the photo, clearly Soviet militias are being trained in bayonet combat under the guidance of an instructor. But look what kind of rifles they have and what kind of bayonets are they wearing?

For more than three centuries stories bayonet, it was used in battle repeatedly, but every decade less and less. As a result, in our days, even a one-on-one duel of a soldier with a bayonet with an adversary with an adversary is called a "bayonet attack" and rewarding for this ... the Military Cross!

I write in measured verse
Not too quick.
Let him talk about the war
Throwing away all the tinsel
And does not sound
Antediluvian cymbal.
Hurray for victory without speeches
And no noise effects.
Now the course of the war depends
From the powerful muscles of the machines.
She's in hand
Crafts and artisans.
“A utilitarian look at the fight of The Monitor by Herman Melville. (translated by Ign. Ivanovsky)
History weapons. So, the creation of the bayonet in the middle of the XNUMXth century led to the fact that the bayonet attack became the main tactic of the infantry during the XNUMXth and even at the beginning of the XNUMXth century. However, already in the XNUMXth century, many military men noted that the presence of a bayonet no longer leads to such frequent close combat as before. Instead, one side usually fled before the actual bayonet battle began. It was increasingly believed that the use of bayonets was primarily associated, so to speak, with the level of the soldier's morale, since it gave a clear signal to both his own and the enemy about his full readiness to kill at close range. 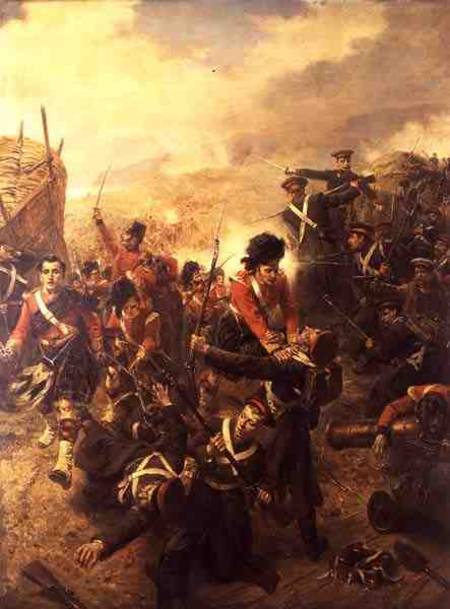 Robert Hillingfot. "Redan attack on Malakhov Kurgan!" It seems to be a bayonet, yes, but in the center the Scotsman became so brutal that he strangles our soldier ...
Recall that bayonet attack was a common tactic even during the Napoleonic Wars. But even then, detailed lists of casualties in battles showed that in many battles only less than 2% of all treated wounds were inflicted with bayonets. Antoine-Henri Jomini, a famous military writer who served in various armies of the Napoleonic era, wrote, for example, that most bayonet attacks resulted in one side simply fleeing even before close contact was established between opponents. Bayonet fighting did take place, but mostly on a small scale, when the units of the opposing sides collided with each other in a confined space, for example, during the assault on fortifications or when ambushed on rough terrain. Fear of hand-to-hand combat in all other cases prompted people to flee in advance of meeting the battle lines. That is, the bayonet became more and more a means of psychological influence and was less and less used to inflict wounds. 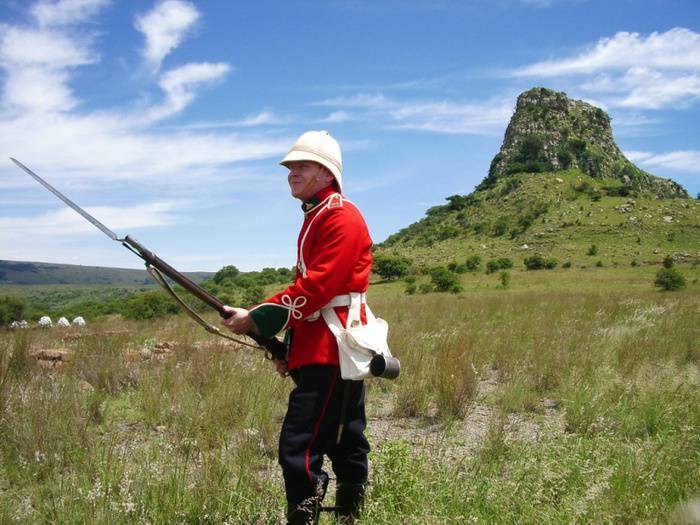 Triangular bayonet on the Martini-Henry rifle. Battle of Izandlvan - during the Anglo-Zulu War on January 22, 1879
During the American Civil War (1861-1865), the bayonet, as it turned out, was responsible for less than 1% of losses on the battlefield, that is, it was used only sporadically. But although such attacks brought few casualties, they nevertheless often determined the outcome of the battle. In addition, bayonet training could be used to simply prepare recruits for action on the battlefield. 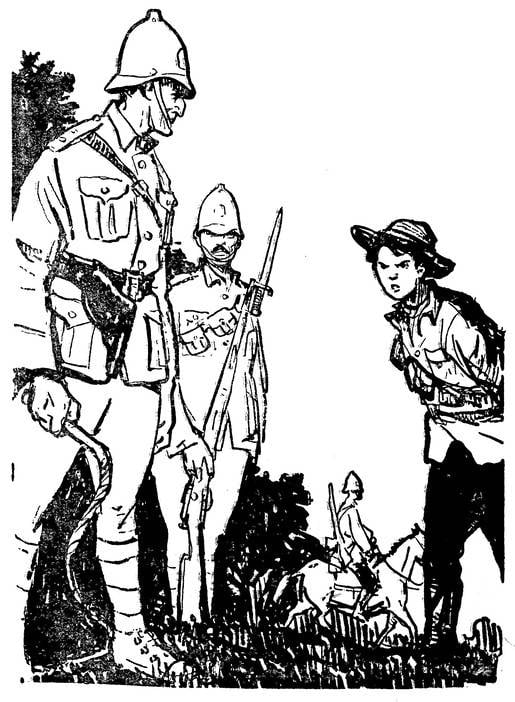 An English soldier during the Second Boer War with a Lee-Metford rifle with a blade bayonet. Illustration by artist A. Kokorin from the book by Louis Bussenard "Captain Tear the Head" (Penza Book Publishing House, 1956)
But there were also exceptions. Thus, although the Battle of Gettysburg was won by the Union armies mainly through massive artillery fire, the decisive contribution to victory was associated with the bayonet attack at Little Round Hill, when the 20th Maine Volunteer Infantry Regiment, seeing that it was running out of ammunition, joined the bayonets and rushed into the attack, surprising the Southerners and capturing many of the surviving soldiers of the 15th Regiment of Alabama and other Confederate regiments.

The vision of the battles of the First World War evokes in our minds popular images from the movies, where waves of soldiers with bayonets sited rushing forward under a hail of enemy fire bullets. Although this was the standard method of warfare at the start of the war, it was rarely successful. The losses of the British on the first day of the Battle of the Somme were the worst in the history of the British army: 57 soldiers and officers who were out of action, 470 of whom were killed. 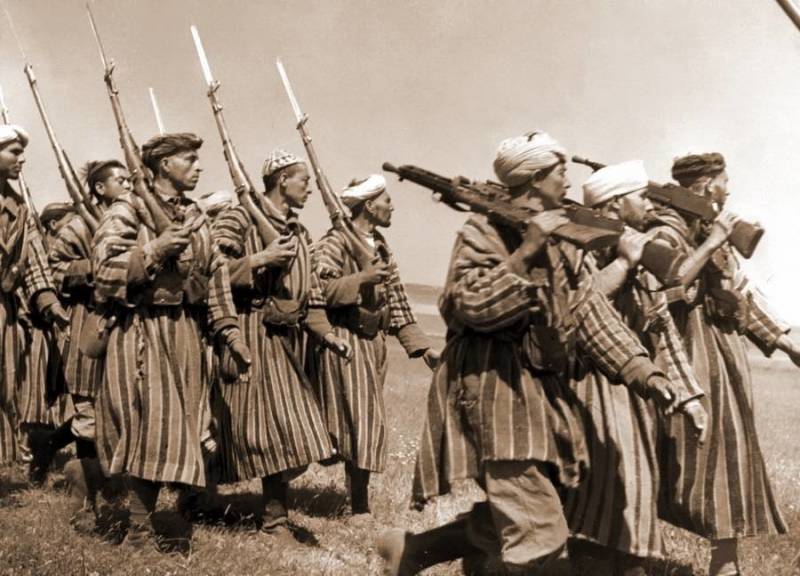 Moroccan gumiers, 1914
During World War I, no man's land was often hundreds of yards across. This area was usually pitted with craters from artillery and mortar shells, and sometimes poisoned with chemical weapons. Protected by machine guns, mortars, artillery and arrows, the positions of both sides were also covered with rows of barbed wire, land mines, and also littered with the rotting corpses of those who had not passed through it earlier. Therefore, it is not surprising that a bayonet attack through such a "no-man's land" was such a difficult moral and physical test that it often led to the complete destruction of entire battalions, and therefore such attacks ... were tried in every possible way to avoid! 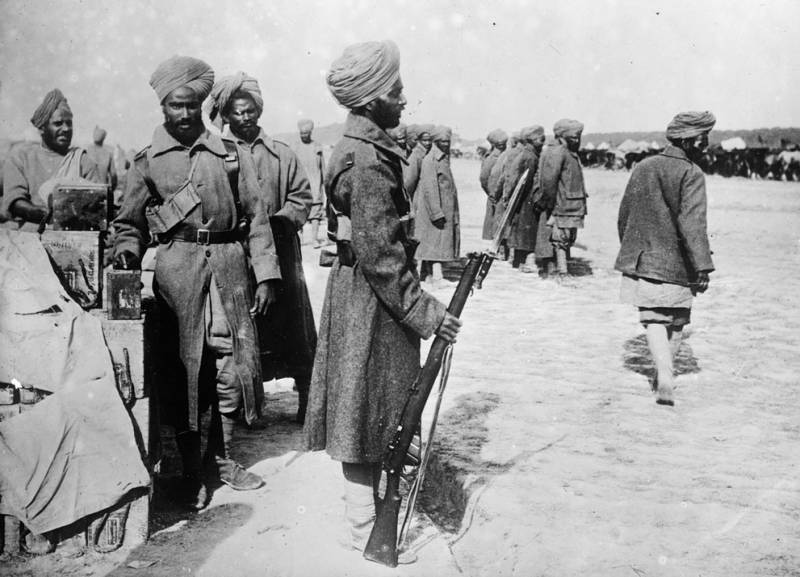 British Native Infantry, 1915 With Lee-Enfield rifles ...
Already at the beginning of the 1904th century, the proliferation of machine guns made bayonet attacks questionable. So, during the siege of Port Arthur (1905-XNUMX), the Japanese several times attacked its fortifications with masses of infantry with bayonets attached, went to the Russian artillery and machine guns, suffering huge losses. One of the descriptions we know of what was seen there after the attack is this:

"A solid mass of corpses covered the cold earth like a carpet." 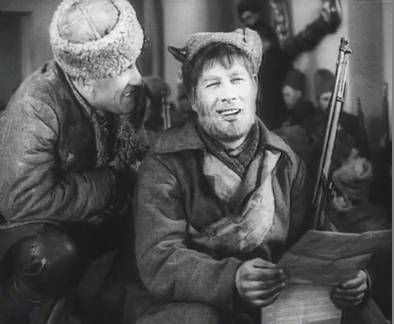 A still from the movie "The Man with a Gun", 1938. Look how he is wearing a bayonet ...
True, during the Second Sino-Japanese War, the Japanese were able to effectively use bayonet attacks against poorly organized and armed Chinese troops. However, the Russian soldiers, as noted by military observers and journalists from different countries, were attacked with shouts of "Banzai!" did not make any impression.

It is interesting that needle bayonets were also used on rifles of the 30s of the last century. For example, this was the bayonet of the French rifle MAC-36 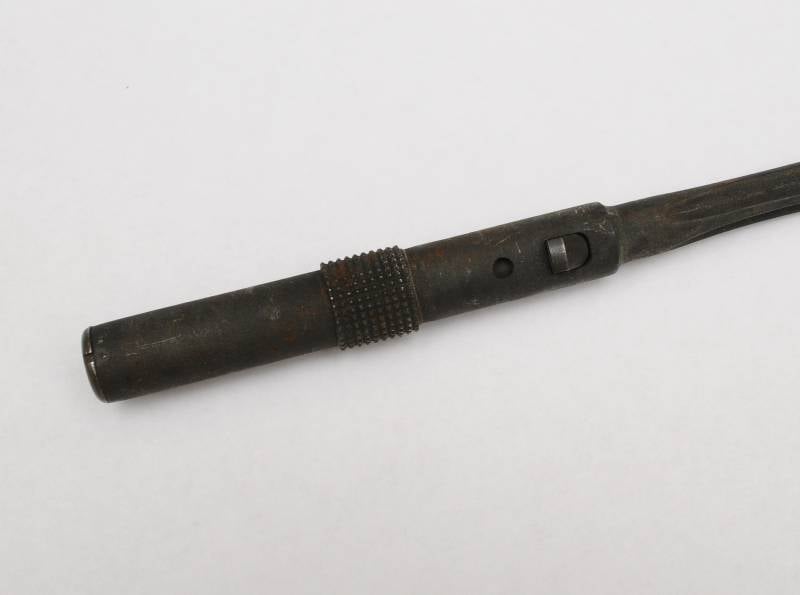 And this is his handle, with which he was attached under the barrel in a special socket!
Almost the same thing happened in World War II. The surprise Banzai bayonet attack was effective against small groups of US soldiers who were not trained for this form of combat. But by the end of the war, the Japanese were suffering horrific losses in such attacks. As a result, the Japanese simply squandered valuable human resources in them, which hastened their defeat. 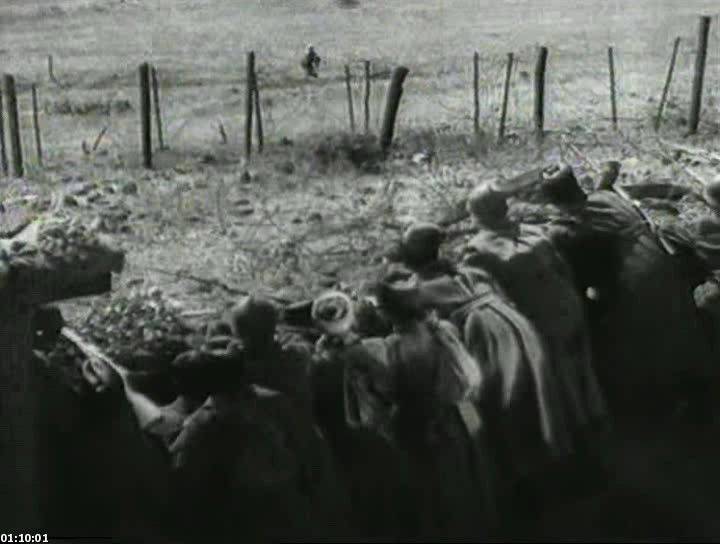 “We are from Kronstadt”, 1936. Attacking even such a liquid line of defense with infantry lines, and even a machine gun, was just the height of madness or despair. Although, of course, the defenders could run out of cartridges ...
Some Japanese commanders, such as General Tadamichi Kuribayashi, recognized the futility and futility of such attacks and categorically forbade their men to carry out them. And the Americans were really surprised that the Japanese did not use such attacks in the Battle of Iwo Jima.

The combination of infiltration and bayonet attack by PLA units during the Korean War was very cleverly used. The typical Chinese attack took place at night. Several groups of five were sent to look for the weakest point in the enemy's defense. They had to crawl discreetly to UN positions within grenade throw range, and then suddenly attack the defenders with bayonets attached to break through the defenses, relying on shock and confusion. 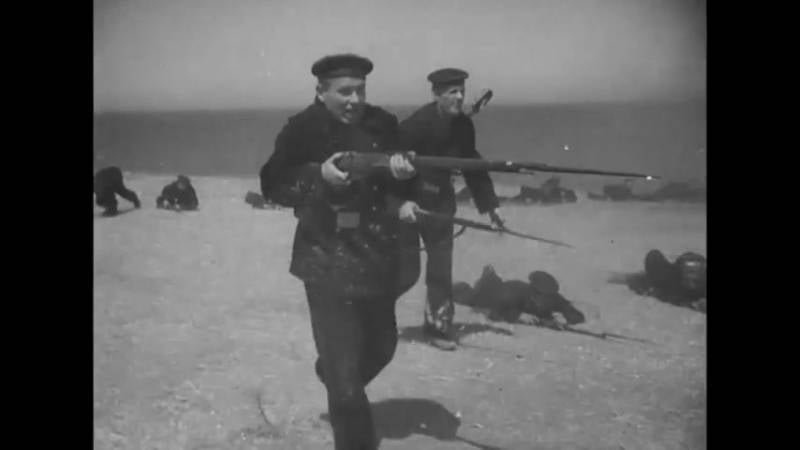 And this is how our red sailors go into a bayonet attack in the same film!
If the initial blow did not break through the defenses, additional groups were advanced to help. As soon as a gap formed, the bulk of the Chinese soldiers poured into it, who moved to the rear and attacked on the flanks. Often such short attacks were repeated until either the defenses were broken or the attackers were completely destroyed. 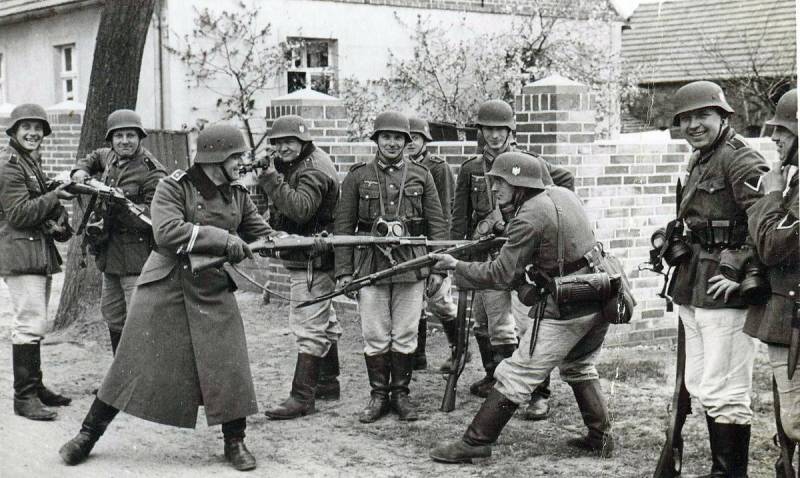 German soldiers of WWII are trained in bayonet combat
Such attacks made a strong impression on the UN forces that fought in Korea. Even the term "human wave" appeared, which was widely used as a cliché by both journalists and the military to describe an attack by an overwhelming number of Chinese on the front. But this, however, did not correspond to reality at all, since small groups acting covertly and against a weak spot in the line of defense could not be called a "wave". In fact, the Chinese rarely used infantry masses in attacking enemy positions, since the firepower of the UNPO troops in Korea was extremely high. 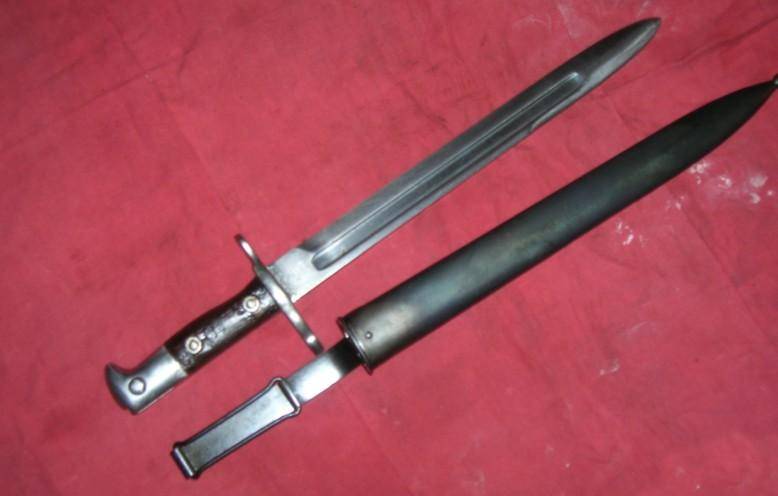 American bayonet for Springfield rifle in .30-40-02 caliber
However, this does not exclude the fact that in Korea ... the Americans themselves went to bayonet attacks! For example, in the US Army Infantry Museum in Fort Benning, Georgia, there is a diorama depicting an attack by the officer of the 27th Infantry Regiment of the US Army Lewis Millett at Hill 180, for which he received the Medal of Honor.

Historian S. L. A. Marshall described this attack as "the most genuine bayonet attack since Cold Harbor," since of the 50 North Koreans and Chinese killed there, about 20 were stabbed to death with bayonets. Subsequently, this place was named: Bayonet Hill. The medal was officially presented to Millet by President Harry S. Truman in July 1951, and then he was awarded the second most important award of the American army - the Distinguished Service Cross, due to the fact that in the same month he led another such bayonet attack. Apparently, he just liked "this case", especially since in both cases he was lucky to stay alive ... 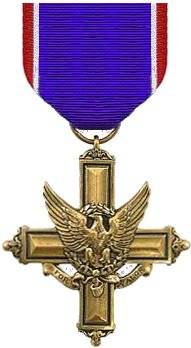 Distinguished Service Cross - USA Award
Interestingly, during the Korean War, the French battalion and the Turkish brigade were also not averse to hitting the enemy with hostility!

In 1995, during the siege of Sarajevo, French infantry from the 3rd Marine Infantry Regiment from the Blue Helmets launched a bayonet attack against Serb forces at the Vrbani Bridge. As a result of the collision, two people were killed, another seventeen were injured.

During the Second Gulf War and the War in Afghanistan, British Army units also carried out bayonet attacks. In 2004 in Iraq, at the Battle of Danny Boy, Argyle and Sutherland Highlanders' mortar battery positions were attacked by more than a hundred Mahdi Army personnel. As a result of the ensuing hand-to-hand combat, more than 40 rebels were killed, and 35 bodies were picked up (many sailed along the river) and 9 prisoners were taken. Sergeant Brian Wood of the Royal Regiment of the Princess of Wales was awarded the Military Cross for his participation in this battle. 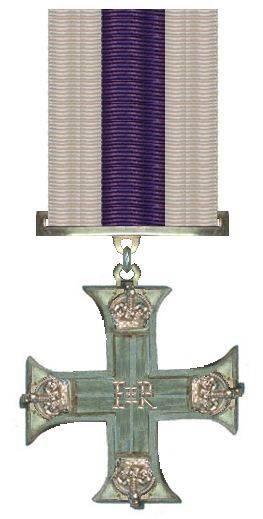 Military Cross - British award
In 2009, Lieutenant James Adamson of the Royal Regiment of Scotland was awarded the Military Cross for the fact that, while on duty in Afghanistan, he first shot one Taliban fighter, and when he ran out of ammunition and another Taliban appeared, he hit him with a bayonet. In September 2012, Lance Corporal Sean Jones of the Princess of Wales Regiment was awarded the Military Cross for his involvement in the October 2011 bayonet attack.