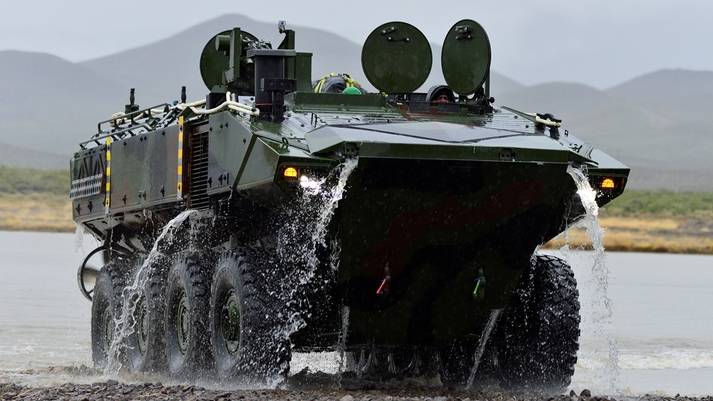 Last year, the United States Marine Corps received the first batch of Amphibious Combat Vehicle (ACV) amphibious armored personnel carriers. This technique was soon used in operational tests, during which it showed its advantages and disadvantages. Recently, fragments of the annual report of the Pentagon's Department of Testing and Evaluation (DOT & E) were published with the main test results.

Operational tests by DOT & E were carried out from June to September 2020. Their task was to test the equipment of the first batch in conditions as close as possible to real operation and combat work. Based on the results of the tests, a voluminous report was compiled. It remains closed for now, but the main points of this document were included in the DOT & E's annual report. Several pages of the annual report have recently been published by specialized foreign publications.

The tests were carried out at the base of one of the Marine Corps companies with standard equipment and weapons. The division used serial JLTV armored cars and LAV armored personnel carriers. The company was reinforced with a platoon of several ACV amphibians. This made it possible not only to test the new technology in different conditions, but also to compare it with existing samples.

The test program included 13 tests of various kinds on roads and rough terrain, on water, etc. The weapons were also checked. The technique passed 12 checks. ACV showed their potential, but at the same time showed noticeable technical and operational deficiencies.

During tests on land, ACV armored vehicles showed high mobility, speed and maneuverability in all proposed conditions. In some respects, the new amphibians surpassed other equipment that participated in the tests. 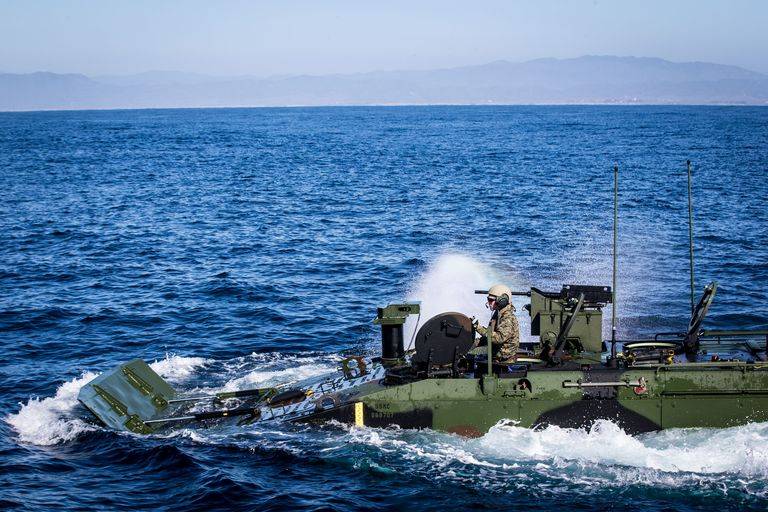 A full-scale test of the amphibious and landing qualities of the new technology was carried out. ACV descended from the shore to the water, sailed along a given route and returned to land. Also, tests were carried out with the landing of equipment from the landing ship and subsequent sailing to the shore. During such tests, they covered up to 12 miles on water.

Armament corresponding to the configuration of the armored personnel carrier was tested under different conditions. A remotely controlled combat module with an M2HB machine gun and optical means ensured the detection and destruction of targets at all operating ranges. When firing from a standstill at a stationary target, the effectiveness of fire reached 91%, in motion - 97%. However, a number of shortcomings and problems of the module were revealed.

The new ACV armored vehicles compare favorably with the available ILC equipment with modern electronic equipment. Instruments in the driver's, commander's and gunner's seats simplified driving, combat work and interaction with headquarters or other vehicles. However, high performance was provided only during stable operation.

Also, an assessment of the resistance of the equipment to various threats was carried out and the level of survivability was determined. There is no data on this topic: the corresponding part of the DOT & E report is classified and is not subject to public publication.

According to the requirements of the Pentagon, the mean time between failures in the field should exceed 69 hours. The actual value of this parameter during the tests was only 39 hours. Communication and control systems broke down more often than others, which prevented the continuation of the tasks. Similar shortcomings were shown by the chassis, which required regular replacement of suspension elements. Some switches and sensors for opening hatches and ramps were not reliable enough. 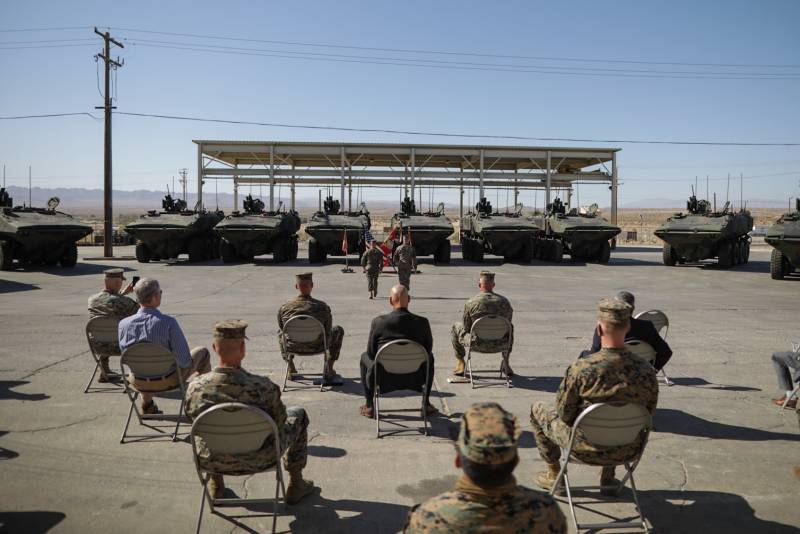 The handover ceremony of the first batch of ACV combat units of the ILC, November 4, 2020
Tire damage while driving on desert terrain has become a serious problem. It was found that the crew and the troops had no way of replacing the wheel or tire in the field. Due to the lack of a standard jack and a large mass of wheels, the help of a recovery vehicle is needed. Waiting for help and completing work took up to 2 hours.

It was found that in some cases the damage is associated with incorrect selection of tire pressure. Competent use of centralized pumping has reduced the number of such breakdowns and, accordingly, reduced downtime in the course of solving problems.

The amphibious combat weight exceeds 31 tons, which can lead to operational problems. If the ACV got stuck or broke, the help of several LVSR recovery vehicles was required at once. This means that in order to introduce new armored vehicles, it is necessary to revise the structure and equipment of support units.

The test marines criticized the ergonomics of the troop compartment. Taking into account modern threats, it is equipped with "anti-mine" seats and other protection. All this reduces the free space inside the compartment and makes it difficult to board or quickly disembark. The chairs were also uncomfortable. Their shape does not take into account the presence of body armor and other items of equipment. When driving or swimming for a long time, this negatively affects the condition of the fighter.

According to test results

In general, the ACV amphibious armored personnel carrier received a good rating. In all the main characteristics and capabilities, it surpasses the outdated AAV7A1 machine, which should be replaced in the foreseeable future. The new ACV is better protected, has improved mobility, is more comfortable for the crew and troops, etc. 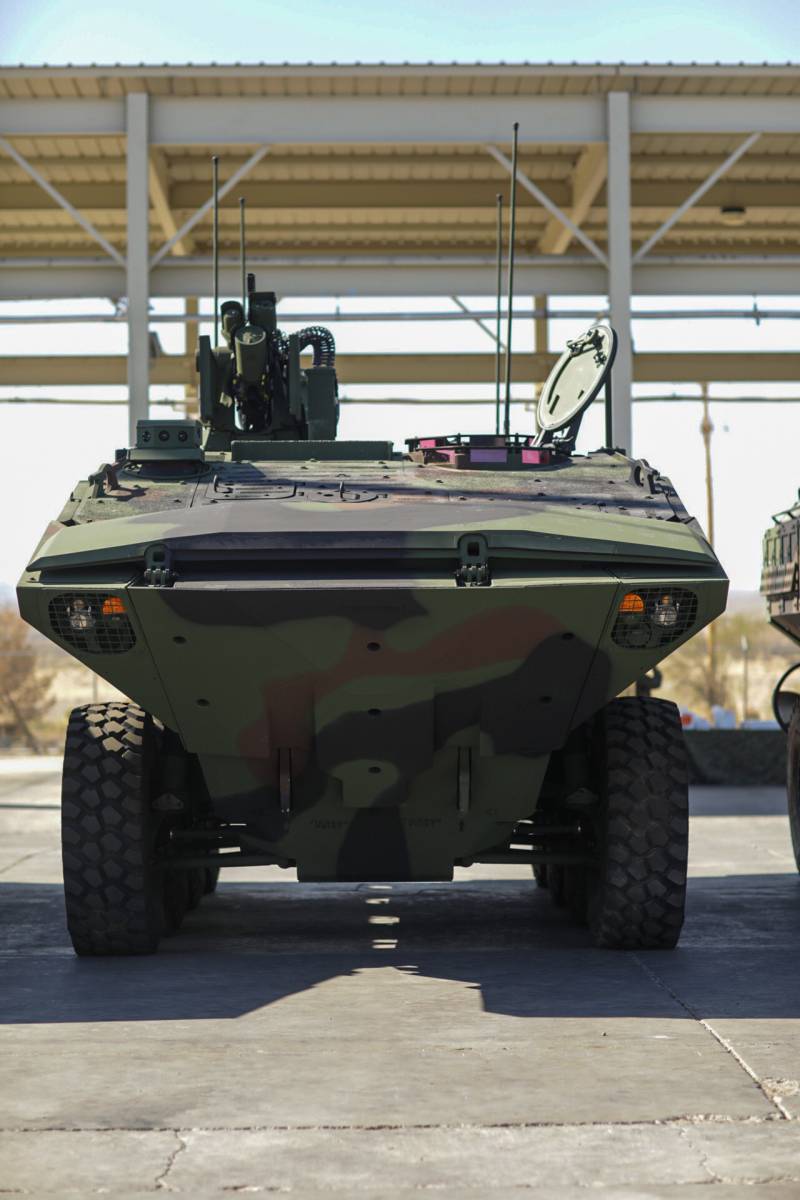 Operational tests revealed a number of significant shortcomings, the presence of which does not yet allow the ACV to be put into service. However, DOT & E offers a set of measures to improve new technology. Basically, they affect only individual structural elements or methods of organizing operation. Cardinal alterations of the armored vehicle are not required, which, to a certain extent, will simplify, reduce the cost and speed up the fine-tuning.

Development companies, BAE Systems, Iveco and related enterprises, in the near future will have to take into account the recommendations of the Test Department and adjust the project, as well as improve production technologies. It is expected that after that the ACV armored vehicles with the required level of technical characteristics and reliability will begin to roll off the assembly line.

To date, only one batch of ACV amphibians has been transferred to the combat unit. In early November, 18 armored personnel carriers entered the disposal of the 3rd separate amphibious assault battalion of the 1st Marine Division. Previously, the battalion used the outdated AAV7A1, and now it is mastering modern technology.

The current stage of the program for the production of new equipment is designated ACV 1.1. At the moment, it provides for the supply of 56 pre-production armored personnel carriers. After them, a full-scale series will be launched. In total, within the framework of ACV 1.1, 204 amphibians with a total cost of $ 1,2 billion will be built. Deliveries will continue until 2023 inclusive. 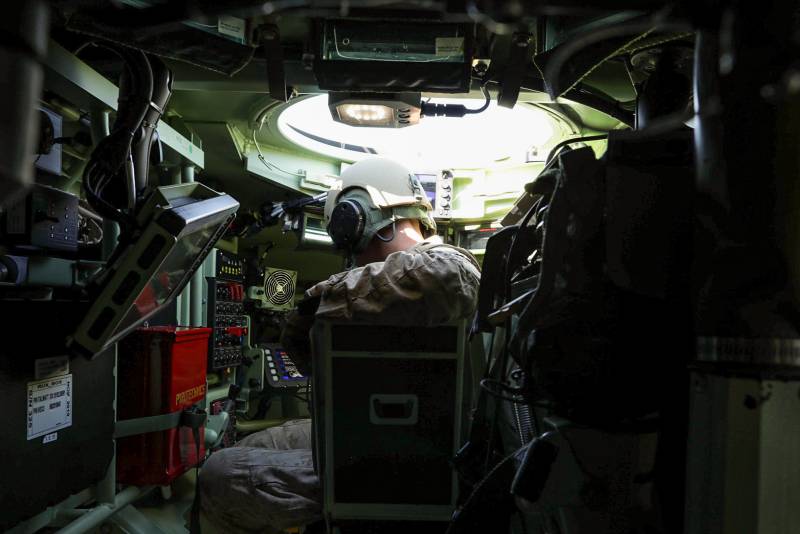 View of the driver's workplace
Pre-production armored vehicles, among other things, are designed to identify previously unnoticed shortcomings and adjust the project. By the end of production of the first 56 machines, the project must fully meet all customer requirements, which will allow launching a full-scale series without problems.

In total, the KMP plans to purchase at least 850 armored vehicles of the ACV series in modifications of armored personnel carriers, infantry fighting vehicles, etc. They will be built on a common chassis and will receive different equipment and combat modules. The supply of serial ACVs will gradually abandon the outdated AAV7A1, updating the amphibious assault and landing craft fleet and increasing the Corps' amphibious capabilities.

Thus, the current work to determine the real characteristics of pre-production equipment and to update the project are of particular importance. By fixing the shortcomings of ACV now, the industry and the ILC will insure themselves against a host of future problems. How successful the current stage of fine-tuning will be will become clear during the next tests.

Ctrl Enter
Noticed oshЫbku Highlight text and press. Ctrl + Enter
We are
In the name of mobility. Wheel armored personnel carrier-amphibious ACVSteps on the water. Development of the vehicle for the US Marine Corps resumed.
Military Reviewin Yandex News
Military Reviewin Google News
21 comment
Information
Dear reader, to leave comments on the publication, you must sign in.