Galan: the man and the revolver 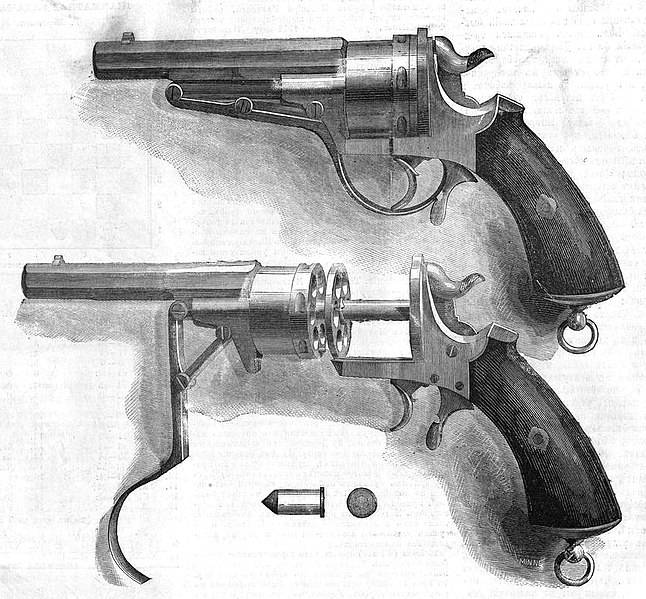 Forget about a thousand comrades,
And hundreds of other chimeras
You will never find a friend,
Than your combat revolver!

He was only lying in his pocket,
In the final decisive hour
You will never be deceived
He will never betray you!
(Adam Lindsay Gordon - Australian poet and politician)
Weapon and firms. Finally, the turn came to Galan's revolver. Many people asked me to tell about it, but what to tell? Do not rewrite the book of V.E. Markevich? But the stars converged, so you can tell about him, and show in all forms, and at the same time clarify the same Markevich. Well, we will start our story traditionally - with the biography of the creator of this original revolver. Charles-François René Galan was a French citizen (1832-1900), although he worked in Liege. His son Rene continued his father's business and was engaged in weapons until 1942. It was considered a major European manufacturer of revolvers - both civil and military. From 1873 he actively competed with the Chamelo-Delvin firm. He became famous for his revolver "Galan", which is also sometimes called "Galan-Sommerville" or "Galan-Perrin" by the name of the cartridge used with the "big hat". 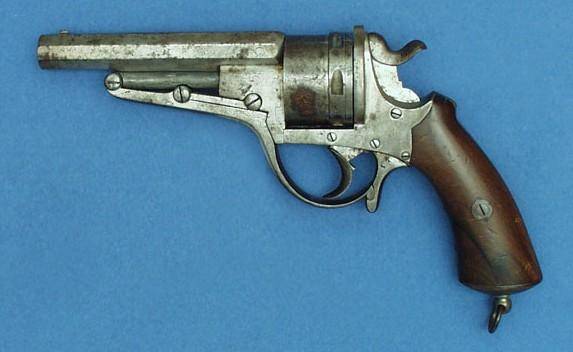 Revolver "Galan" model 1870, 11 mm caliber. Photo by Alain Daubresse
In the 70s of the XIX century, among the designers-revolvers there was a trend to create models with fast discharge. The direction here was set by Smith and Wesson with their numerous models, and everyone was especially impressed by the purchase of their revolver by the Russian government and, of course, the huge orders that followed. Many, in particular the firm "Mervyn and Hubert", tried to create something better and "seduce" the tsarist government with their development, but until 1895 no one except Leon Nagant succeeded.

But it was Charles Galan's revolvers that became hardly the first sample of weapons that had "automatic discharge", only they entered service not for the army, but ... for the Russian naval fleet... And they took them into service almost simultaneously with the Smith and Wesson revolver! 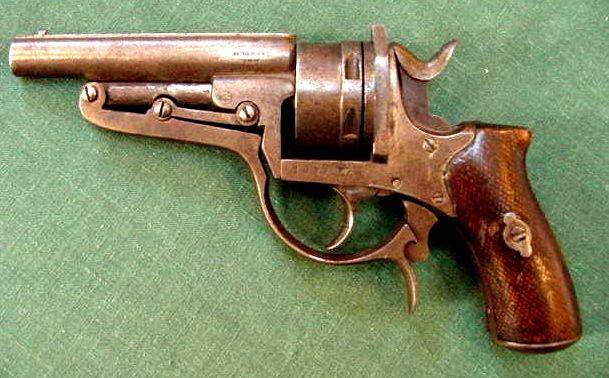 Revolver "Galan" caliber 9 mm, also double-acting. Photo by Alain Daubresse
And it so happened that by order No. 33 of March 12, 1871, given by the manager of the naval department of the Russian Empire, this revolver, with some changes that were made at the direction of Grand Duke Konstantin Nikolaevich, was adopted by the Russian fleet under the name of the "boarding revolver pistol sample of 1870 ". The revolvers were initially supposed to be purchased in Belgium. And then their release was to be carried out at the arms factory of Nikolai Ivanovich Goltyakov in Russia (about this moment in stories of this revolver will be discussed later). But, be that as it may, the revolver was adopted for service and for some time and in some quantity was used in our fleet! 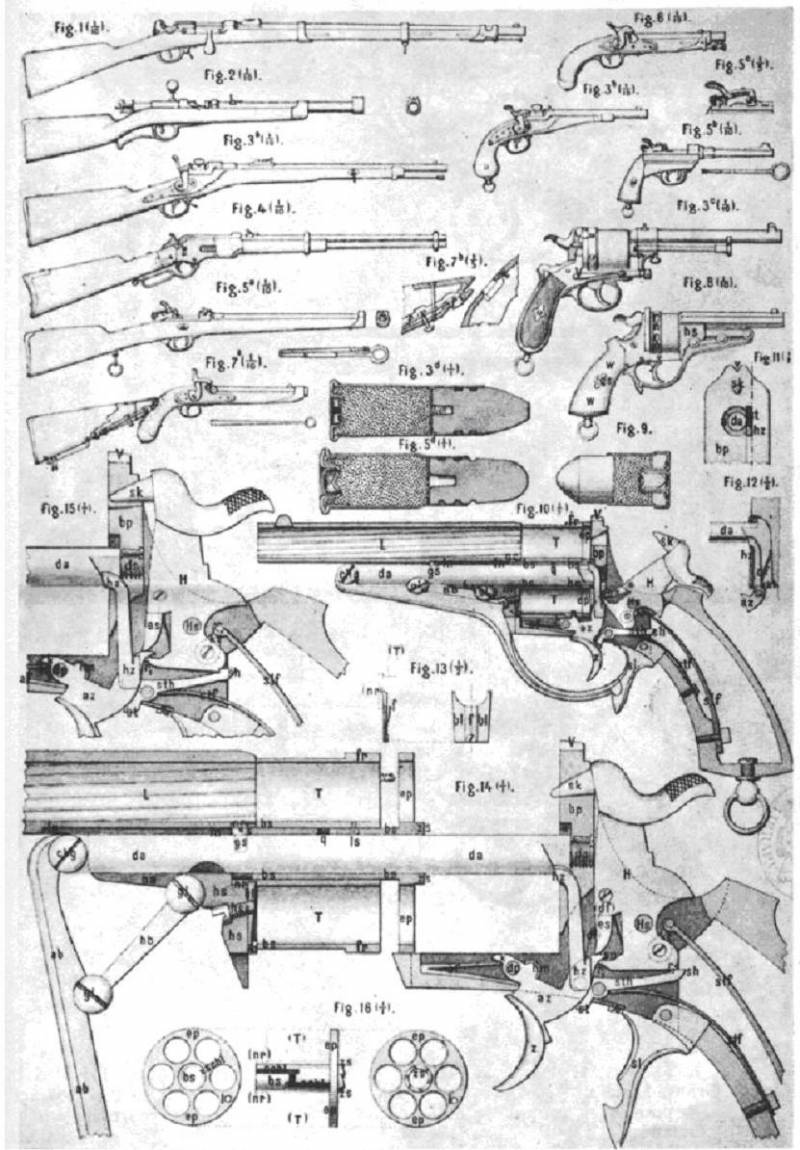 Diagram of the Galan revolver device
For a number of indicators, it was a very advanced weapon at that time: a revolver with an open frame and double action, patented in 1868. The main "highlight" of the design was the lever located under the body of the revolver and combined with the trigger guard. To release the chambers of the revolver drum from spent cartridges, it was required to press the above lever and lower it down. At the same time, the barrel of the revolver moved forward, but the extractor plate was blocked and remained in place. At the same time, the barrel itself continued its movement, as a result of which the sleeves, held by the extractor plate, were removed from the drum and fell to the ground. Instead, new cartridges could be inserted, and the lever moved back, after which the revolver was loaded and ready to fire. 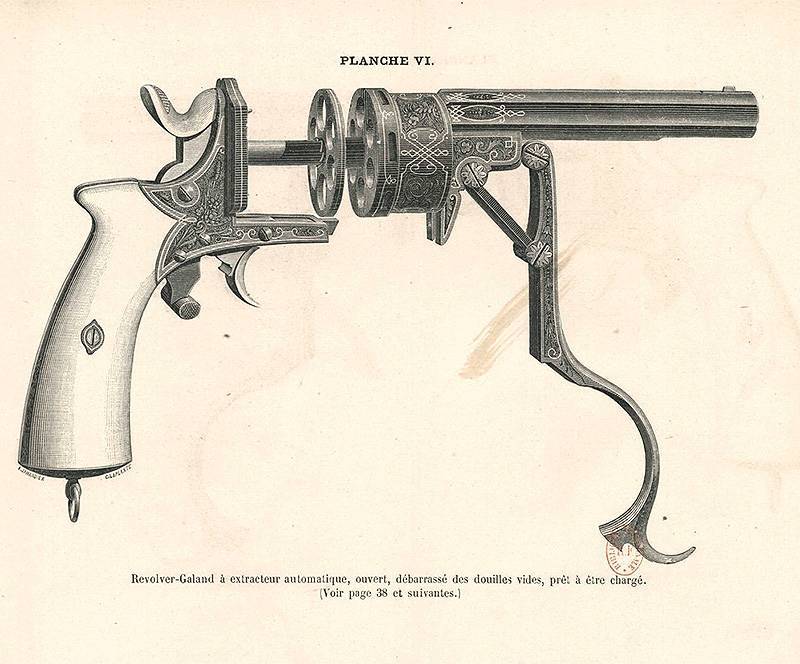 Drawing of a revolver "Galan" in a "luxurious performance"
The cartridges in the revolver were used in different calibers: 7, 9 and especially 11-12 mm. The first examples of the revolver were produced in the UK at the ammunition factory in Birmingham, which was led by Brandlin and Sommerville (hence its second name!). But from October 1868, the production of the revolver was organized in Liege. This revolver became a great success in France, where, before the inevitability of a conflict with a German neighbor, the officers were simply fascinated by it and bought at their own expense. The civilian market also did not remain indifferent. It sold a 12 mm and 9 mm caliber revolver (the so-called "belt revolver"). Moreover, not only Galan himself was engaged in the production of the revolver, but also the enterprise of Vivario Plomber, the Varnan company and the Nagan brothers, and the Goltyakov workshop in Tula in 1878. The Romanian army also ordered Galan revolvers. 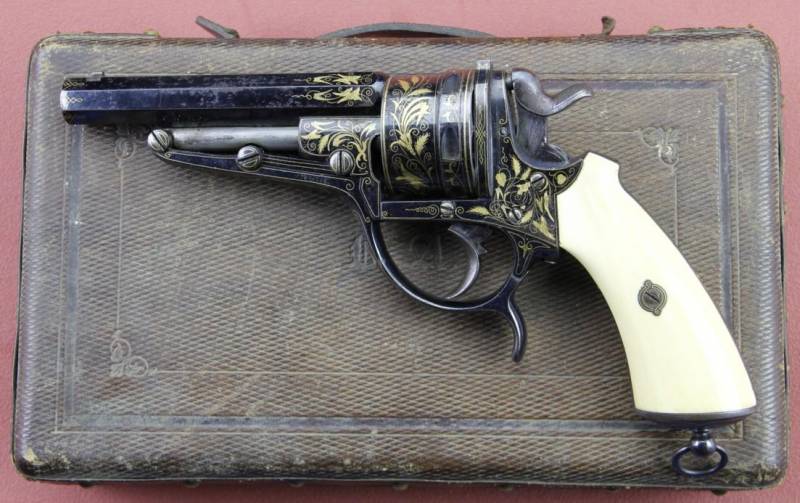 The same revolver in reality. Handsome, isn't it? Here you have a notch in gold and ivory ... Photo by Alain Daubresse 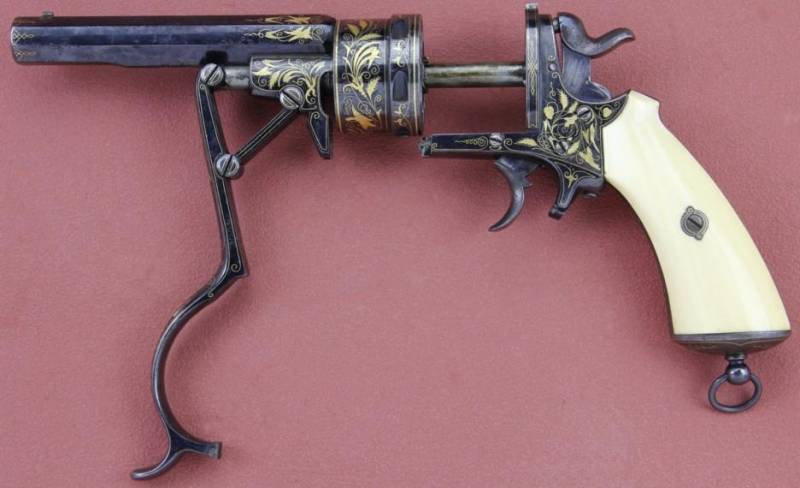 And this is how he looked at the time of reloading. Photo by Alain Daubresse
To France after the war of 1870-1871. it was decided to introduce a new revolver into service, and Galan decided to take part in the competition announced by the Ministry of War. At first he decided to offer the army an improved version of his 1868 model, but the military wanted a closed-frame revolver. Under this requirement, Galan created in 1872 (patents dated February 28, June 24 and September 24 of this year) a very simple but elegant revolver, which, however, turned out to be more expensive than Chamelo-Delvin, who won this competition. There are two known (extremely rare) models of this revolver: one is designed for traditional ammunition with a massive head, the other for 11-mm Chamelo-Delvin cartridges. The second type of this revolver is no less rare, also with two barrels: one for 11-mm Galan cartridges, the other for 11-mm Chamelo-Delvin. 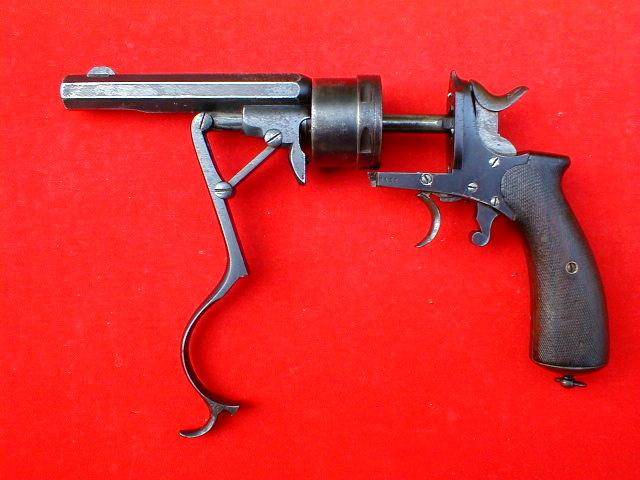 A very rare model from 1872. Photo by Alain Daubresse
Having failed with the army, Galan turned to the civilian market and launched his TUE-TUE (Kill-Kill) hammerless revolver on it in 1892/1893. It turned out to be so successful that it was produced until about 1935 under the 8 mm cartridge of 1892. By the way, at the VO this revolver was described in detail in the article “Galand Tué Tué Revolver».

As for the fate of Galan's revolvers in the Russian Imperial Navy, the situation here was as follows: in 1874, Smith and Wesson's revolvers also began to arrive at the fleet, and they were already in the early 1880s. began to gradually, but steadily supplant "Galan". Operating experience has shown that from the point of view of design perfection, neither one nor the other has serious advantages over each other, but preference still needs to be given to the Smith and Wesson revolver due to the "technical and economic" conveniences that result from the use of a sample that is the same as army. In 1881, the Grand Duke Constantine expressed his consent to the acquisition of Smith and Wesson revolvers for the fleet and the suspension of orders for Galan revolvers. Nevertheless, the "Galans" finally ceased to be used in the Russian fleet only at the very beginning of the twentieth century. 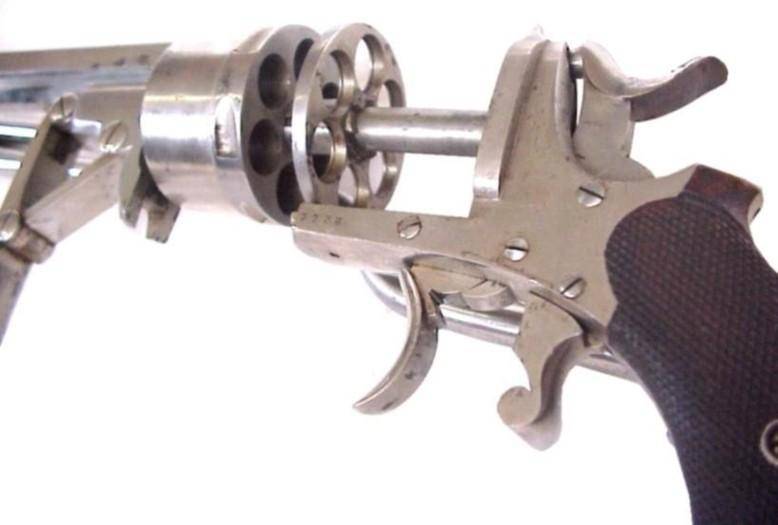 This photo clearly shows the extractor plate in the reload position. Photo by Alain Daubresse
A number of specialists, including V.E. Markevich, among the shortcomings of this revolver is the relatively weak cartridge of the 450-caliber central battle. Now, they say, if it were an English revolver cartridge, then with the same caliber it would be a much more powerful and constructively perfect weapon compared to the same English revolver of Adams! 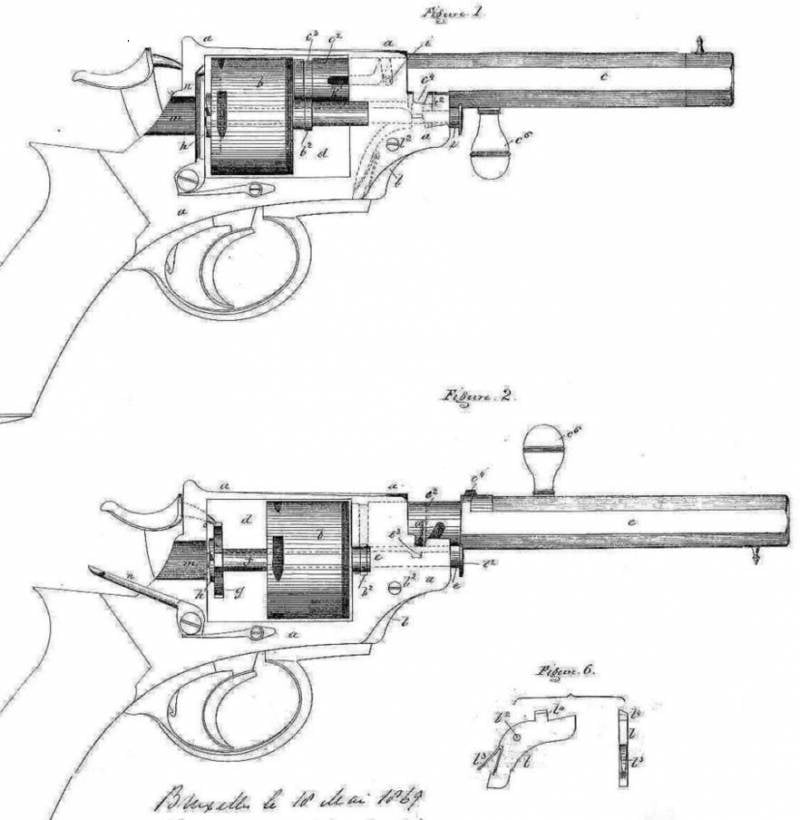 Diagram from John Thomas patent
However, the main, so to speak, "competitor" of Galan in the sense of exploiting the idea of ​​an advanced barrel was a certain John Thomas, who lived in Birmingham in 1879-1883. He worked as a foreman at Tipping & Lowden, a revolver manufacturer. It was there that he “dawned”, and as a result, on March 13, 1869, he received an English patent No. 779 for his “revolver with automatic ejection of cartridges”, and then registered it in Belgium, in Brussels. On May 31, 1869, under No. 25565, he received another patent for an improved model of his revolver.

The exterior of Thomas's revolver. Photo by Alain Daubresse
In his revolver, he abandoned the lower lever, and provided the barrel with a handle. With its help, the barrel was rotated (for this a spiral groove was made on it) half a turn up, disengaged from the frame and moved forward along with the drum. At the same time, the star-shaped extractor was pulled out of the drum and at the same time threw out all empty cases from it. 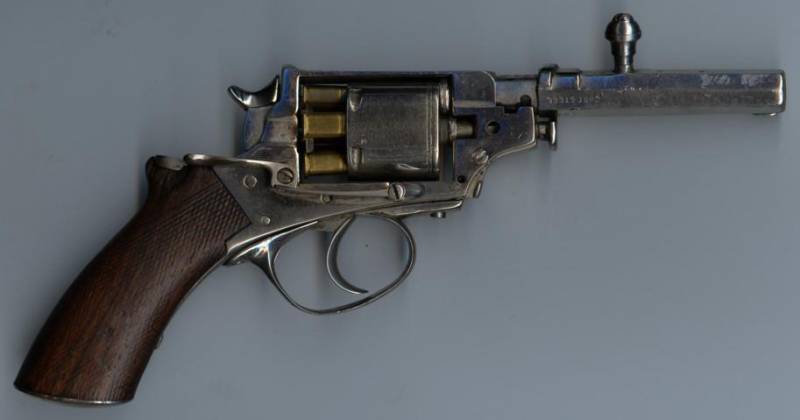 Revolver Thomas with rotated barrel and extractable casings. Photo by Alain Daubresse
It should be noted that there is also a fuse on the left side under the trigger and the Abadi door (on the right side), which folds back to load ammunition. 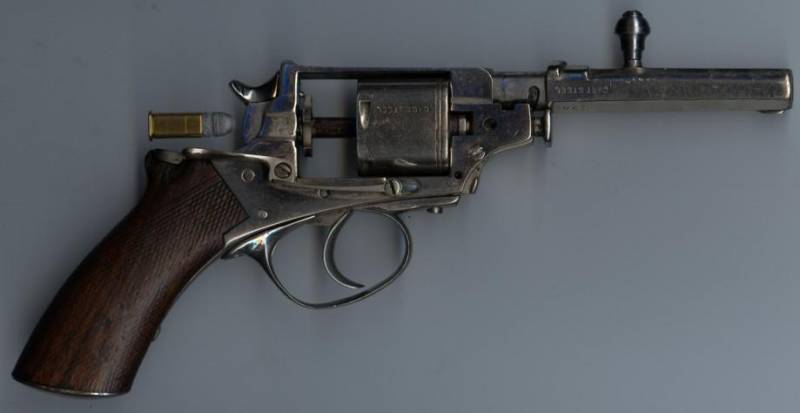 Revolver Thomas and next to his cartridge. Photo by Alain Daubresse
However, he was late with his revolver. Like Galan. The Smith and Wesson system supplanted both of these revolvers.

PS Photos of the revolvers courtesy of Alain Daubresse, author of www.littlegun.be.