What is known about the Burevestnik anti-satellite complex? 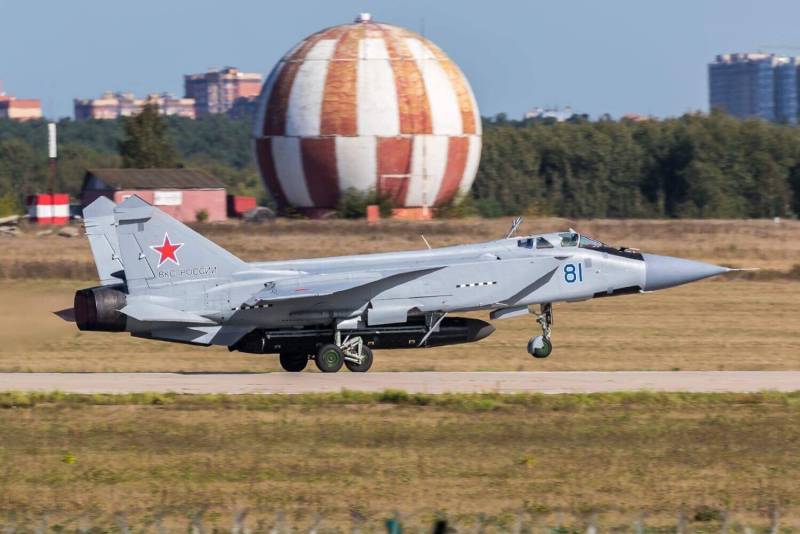 According to various sources, now in our country a number of promising complexes are being developed and tested to combat enemy spacecraft. Interceptor missiles, spacecraft and combat lasers are offered. One such development is aviation rocket complex "Burevestnik". There is no official information about him yet, but the available unofficial data are of great interest.

About 10 years ago, the Russian Air Force command announced the resumption of work on the anti-satellite complex based on the MiG-31 interceptor aircraft. However, no details were provided. In the future, as far as is known, some work was carried out, but official reports did not appear. Probably, such a secrecy regime is associated with the special priority of projects.

In 2018, a MiG-31 fighter in the configuration of a flying laboratory with an unknown rocket under the fuselage was first seen at the Ramenskoye airfield. Quite quickly, this product was associated with the project of an anti-satellite complex with the code "Burevestnik" and the index 14K168. Later it became known about the involvement of the second car in the tests. At the same time, the details of the work were not reported again.

It is curious that the bulk of the information and versions about the Burevestnik project and other works in this direction comes from foreign sources. Specialists and intelligence are studying the few available reports, information on contracts and procurement of defense industry organizations, etc. This kind of "open source intelligence" is yielding results. In foreign publications there are quite complete publications on the topic of "Petrel" and other Russian systems.

It is not entirely clear to what extent this information corresponds to the real state of affairs. At the same time, it shows what results Russian science and technology have achieved - and how our country has become world leaders in a promising direction.

According to open data ...

It is reported that the first contracts for work on the "Petrel" theme appeared in 2008. Subsequently, new orders appeared for the creation of individual components of the complex and other work. In addition, various enterprises and organizations were involved in it throughout the program.

The first contract in 2008 was signed between the Ministry of Defense and the Research Institute of Precision Instruments (part of the Russian Space Systems). Later, the Central Research Institute of Chemistry and Mechanics named after V.I. Mendeleev, Kolomna Machine Building Design Bureau, RSK MiG and other enterprises. 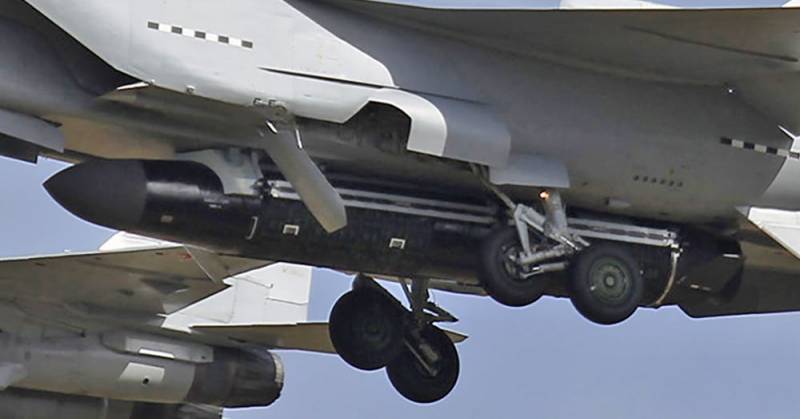 The rocket and the means of suspension close-up. Photo Jetphotos.com
To implement all the plans, it was necessary to develop a lot of new components and assemblies. There is information about the creation and testing of new rocket engines, modern control equipment, etc. In addition, it was necessary to create a spacecraft of an unusual appearance with special capabilities. Apparently, the Burevestnik program is quite capable of entering the list of the most complex projects of our time.

Apparently, in the first half of the tenth years, the general appearance of the complex was formed, after which the development of its individual components began. In 2018, MiG-31 flights began in the configuration of a flying laboratory with a mock interceptor missile under the fuselage. According to the assumptions of foreign sources, full flight tests of the rocket may begin as early as 2021.

The Burevestnik anti-satellite complex includes several products for different purposes. The exact architecture of the complex and its characteristics remain unknown, but the most daring assessments take place. In particular, they talk about the fundamental possibility of creating an ammunition capable of hitting satellites not only in low, but also in geostationary orbits.

The largest and most visible component of the system is the MiG-31 carrier aircraft. He must have new electronics to interact with the headquarters and control the new weapons... In addition, it is reported about the development of an original suspension device for transporting large and heavy missiles.

The missile of the complex is known under the designations "product 293" and 14A045. This product is at least 9 m long. It is assumed to use a two-stage scheme, which allows delivering a payload into an orbit with an altitude of at least 450-500 km. The rocket has a control system that provides launch from different regions with the subsequent output of the load to the required trajectory.

An interesting feature of the Burevestnik project may be its combat load. To intercept enemy spacecraft, not a traditional warhead is used, but a special maneuvering satellite of a small size. This product, called "Burevestnik-M" or "Burevestnik-KA-M", using the 14A045 rocket should maneuver between orbits, approach the target and hit it. The principle of defeat is unknown: foreign sources mention the possibility of kinetic interception or the presence of a high-explosive or nuclear warhead.

The flight performance and combat characteristics of the MiG-31 are well known and hardly change fundamentally when a large and heavy rocket "293" is suspended. At the same time, different foreign publications contain different assessments of the characteristics of the rocket itself, the interceptor satellite and the complex as a whole. The possibility of using the satellite against targets in different orbits, up to geostationary ones, is assumed. An interceptor can remain in space for a long time, and the interception range is virtually unlimited and is determined only by its maneuverability.

Foreign "intelligence" about a promising Russian project looks very interesting and even becomes a reason for pride in our science and technology. From open sources, it becomes known about the availability of advanced technologies and developments that can ensure the solution of specific combat missions in a modern conflict. 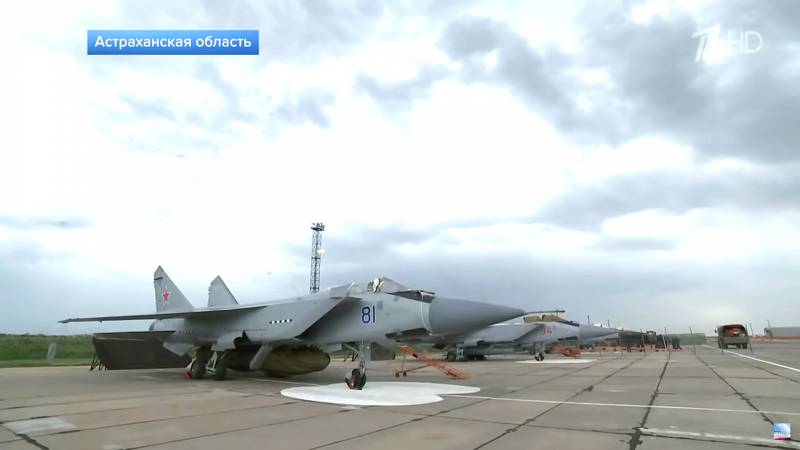 The second prototype aircraft with a sheathed missile, 2019 Shot from the report of the First Channel
The Burevestnik project deals with an anti-space system with aviation, missile and satellite components. Developments of this kind were previously absent in world practice. At the same time, the Russian industry already has all the necessary technologies and developments to create a full-fledged combat complex.

The carrier in the form of a modified MiG-31 interceptor has been tested for more than two years. The start of testing of the experimental missiles "293" is expected. It is not known whether the Burevestnik-M satellite is ready. However, according to known data, there are technologies for creating such a product. Over the past few years, foreign media have regularly reported on the strange maneuvers of Russian satellites and the rapprochement with foreign spacecraft. Such maneuvers can be used not only for inspection, but also during a real attack.

The timing of the deployment of the "Burevestnik" complex on combat duty is unknown. At the same time, Russian officials remain silent, and various forecasts appear in foreign publications, incl. very bold. So, the beginning of flight tests of the complex with a full-fledged rocket 14A045 is attributed to the next year. At the same time, some publications suggest adoption for service as early as 2022.

As part of the system

The modern army needs a developed space grouping, including vehicles for various purposes. In this regard, to combat a developed enemy, anti-space defense means are required, capable of striking reconnaissance and communications satellites. The Russian command takes these aspects of the hypothetical war into account and takes action. So far, we are talking only about development work, but over the next few years, the first samples of the new class will take up combat duty.

It is important that several projects are under development at once. In parallel with the Burevestnik, other systems with different characteristics are being created. In particular, the Russian project of the Nudol anti-missile system, which is believed to be able to fight not only ballistic, but also orbital targets, is very “popular” in the foreign press. The well-known fears are caused by Russian satellites-inspectors capable of maneuvering and observing alien space technology.

Thus, with an eye to the distant future, a layered anti-space defense system with high performance and wide capabilities is being created in our country. It is quite possible that it will become a new means of non-nuclear deterrence: the risk of losing satellites and part of the army's combat capabilities will force the enemy to abandon aggressive intentions. However, new models of weapons are not yet ready for transfer to the army, and they are trying to keep the work on them secret.

Ctrl Enter
Noticed oshЫbku Highlight text and press. Ctrl + Enter
We are
Zeroing the space program, or All hope is now on the "Petrel"How do satellites shoot down?
Military Reviewin Yandex News
Military Reviewin Google News
71 comment
Information
Dear reader, to leave comments on the publication, you must sign in.