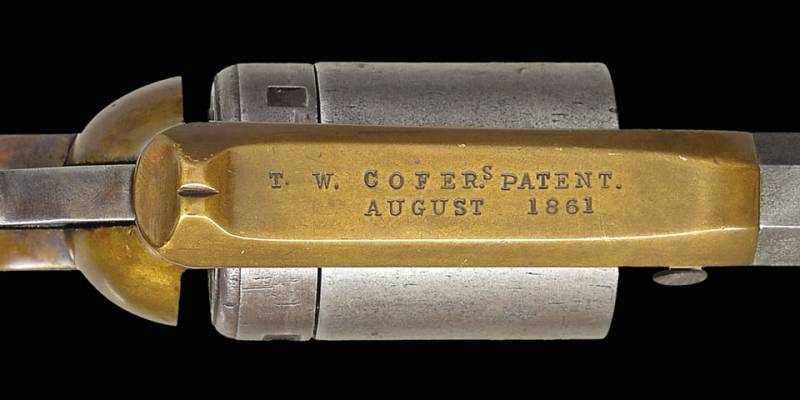 Here it is: the long-awaited and original Kofer revolver. Frame lettering

Little is known about this man, not only in our country, but also in his homeland, in the United States. And all because he did, on the one hand, really little, and on the other, a big step forward in the development of small arms weapons... Only in this race he was immediately overtaken. And once you have overtaken, it means that you become one of the laggards. And who is interested in them? Is that only historians, and then - after many years.

However, we also found people at VO, and in considerable numbers, who were interested, first of all, in his revolver. And so they asked me to write about him. Moreover, the topic of the weapons of the southern states in the war of 1861-1865. the story about him fits completely.

Here is just a problem with the illustrative material. The photos that exist are copyright, and the end of their authorship can not be found. There are photos from auctions, but they have their own specifics - most simply do not answer, unless you want to buy something from them. As a result, I had to turn to the relevant literature. Books such as Confederate Weapons (William A. Ambach III and Edward N. Simmons. Stockpole Company, Harrisburg, PA) and Confederate Long Barrels and Pistols (Richard Tylor Hill and Richard Edward Anthony. Charlotte Publishing, North Caroline). Moreover, it turned out that the materials published by them are practically identical. 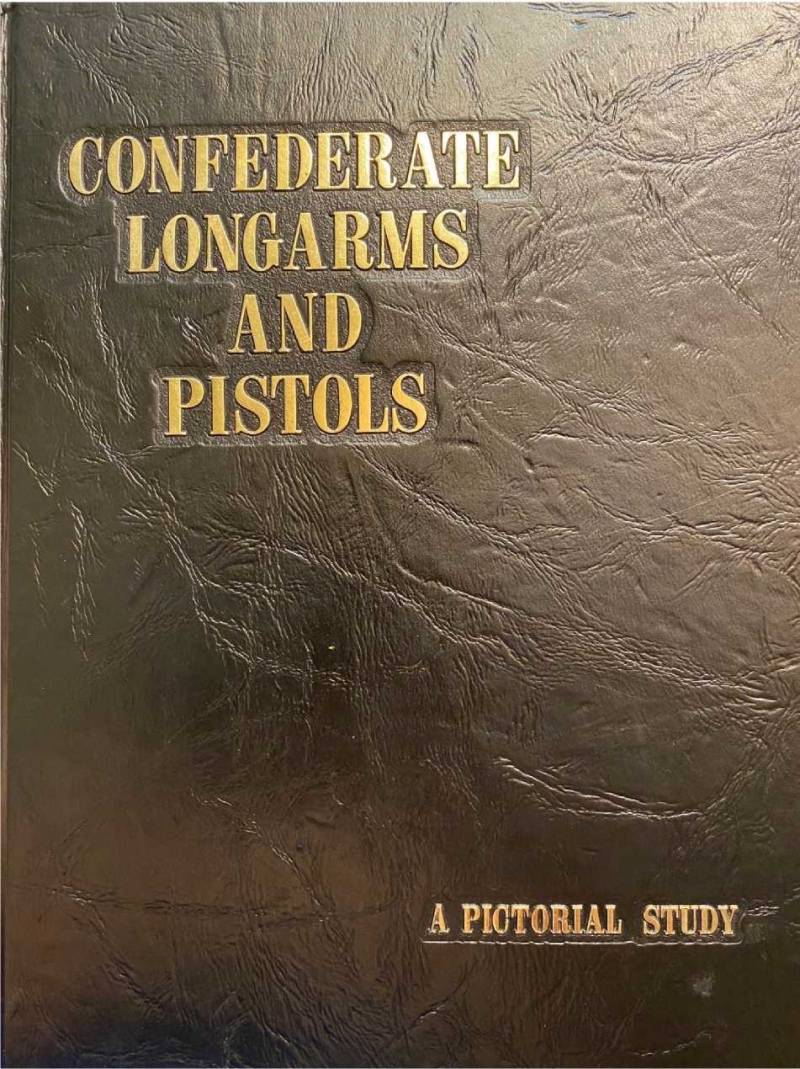 Here is one of these books: Confederate Long-Barreled Weapons and Pistols. Richard Taylor Hill and Richard Edward Anthony. Charlotte Publishing. North Carolina
Well, now you can tell about Kofer himself ...

According to family genealogical records, the ancestors of Thomas W. Cofer settled in Tidewater, Virginia around the middle of the XNUMXth century, near what is now Smithfield, Isle of Wight. As for the surname, it was written as Copfer in various records until the end of the XNUMXth century, but then “p” was somehow lost and they began to write simply Cofer. 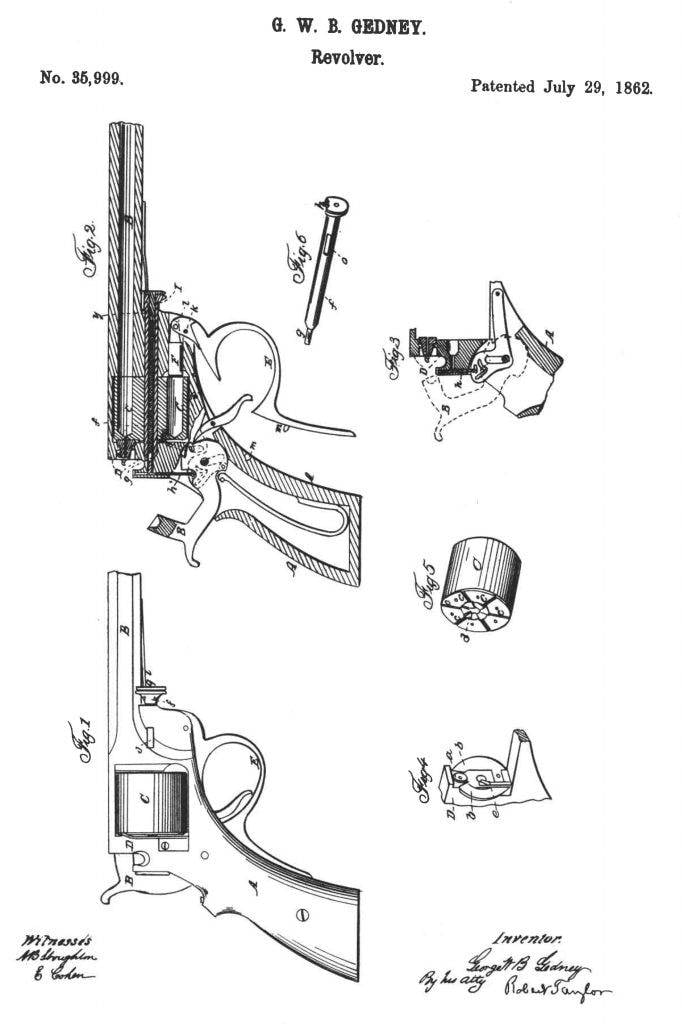 Note that this was the time when patents for the improvement of weapons poured like a horn of plenty. For example, one of these "improvements": the revolver of GV Gedney dated July 29, 1862. The hardener is activated on it not by a lever, but by a trigger guard. He shoots paper cartridges with a glued-in bullet. And he also has only one brand tube directly under the trigger, on which the capsule must be put on before firing. Very economical design.
Thomas Rennes Kofer himself was born on March 22, 1828. He did not receive a long education, like any farm guy in those days, but he learned to read and write, and everyone notes his handwriting as excellent. In addition, he was able to write clear and convincing letters, which even today is given to many with considerable difficulty. 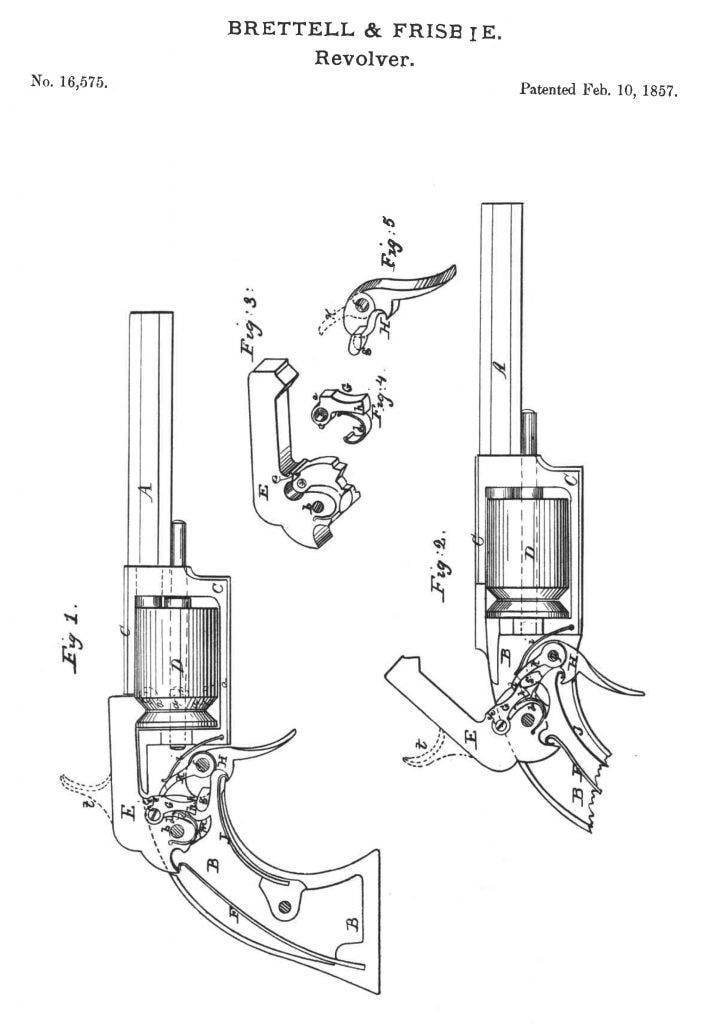 Original patent by Brethel and Frisbee for a top-trigger revolver.
Kofer had a cousin Pembroke Decatur Gwaltney who became a gunsmith. Moreover, in 1859, when Kofer was 31 years old, his brother already had his own arms company, PD Gwaltney & Company. Although it is understandable that it is quite small.

It is quite logical to assume that young Kofer was apprenticed to his cousin at a fairly early age. Later he began to work with him on a partnership basis. And then independently. He first worked in Portsmouth, then moved to Norfolk.

There was at that time Oruzheiny Boulevard, and 8th Union Street was both the city center and a business center at the same time. And it was there that his company was located, known as TW Cofer & Co from Portsmouth. And it is obvious that he was quite capable of producing a number of quite high quality revolvers. But he, apparently, never sought either to obtain a state contract for their manufacture, or to state or private financial support for their production.

One can only assume that Kofer was satisfied with the income he received from repairing and selling weapons in Norfolk at the start of the war, and made no real attempt to expand his business. However, already on July 19, 1861 (that is, just 49 days after the creation of the federal patent office of the Confederation) Kofer applied for a patent. 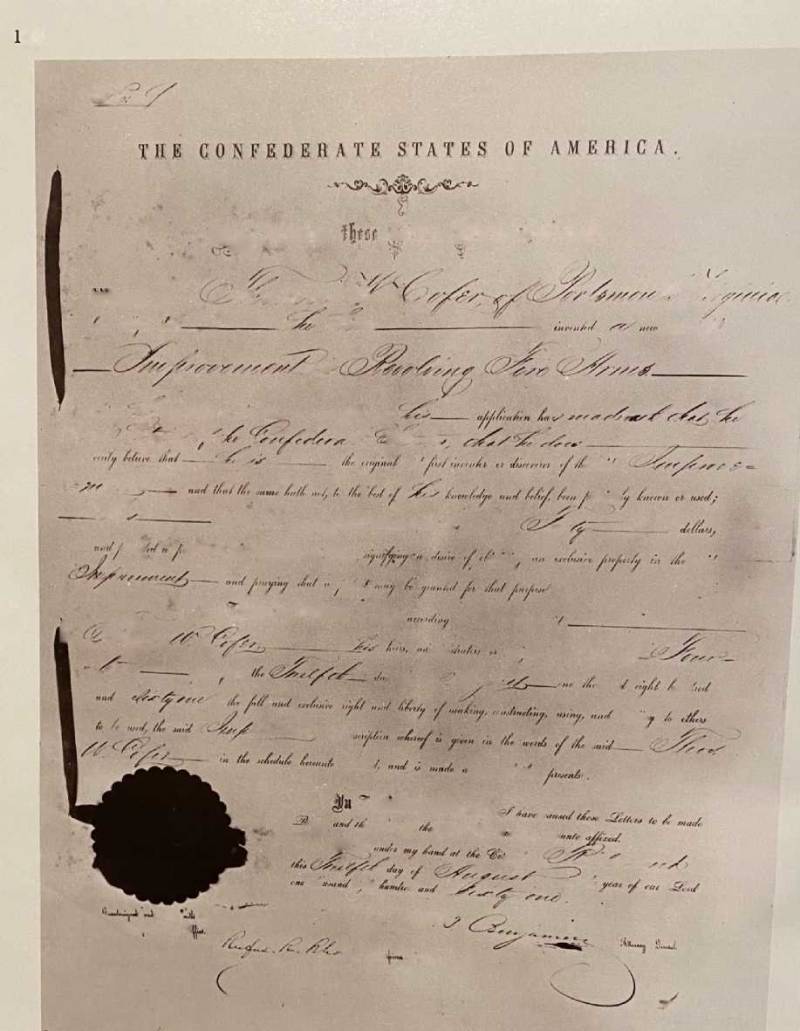 And here is the patent of Kofer himself. Filed July 19, 1861. Received August 12, 1861.
On paperwork, he used the services of a certain James S. French of Washington, who had been associated with the United States Patent Office for many years, and advertised in the Richmond newspapers. And Mr. French really knew his business, since Kofer received his patent. The ninth in a row issued by the Confederate Patent Office. And at the same time in the shortest possible time: August 12, that is, just 25 days after the submission of documents.

In doing so, he even managed to bypass Rollin White's patent, although for the Confederate Patent Office this, most likely, did not matter at all and did not matter in principle. 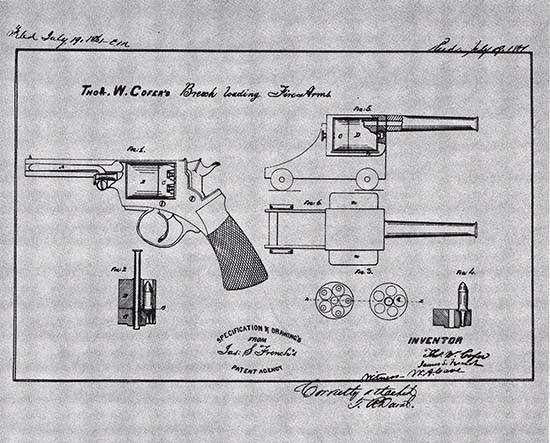 Diagram from Kofer patent.
The working model, which was required under Confederate patent law, was to be a revolver made under the Cofer patent, as shown in the patent.

Revolver Kofer, Type I and next to it its cartridges.
Photo from the book "Long-Barreled Weapons and Confederate Pistols."
But was this revolver produced, that's what matters?

Regarding the answer to this question, it is known that in March 1862, a division of the Confederate Signal Corps of 127 people was formed in Norfolk. After that, many years later, a revolver with a holster and with the inscription:

"On July 21, 1864, this revolver and holster were captured from the Rebel liaison officer, Captain S. H. Merrill, 11th Maine."
We know Norfolk and Portsmouth were captured by the Yankees on May 9, 1862. And with them the Kofer enterprise.

But between these dates there were about 42 weeks, during which it was quite possible to start producing it. Focusing on the average labor input, American historians believe that during this time 140 pieces of Kofer revolvers could have been produced.

Until recently, it was also believed that, since Kofer never had contracts with the Confederate army, all of his products were sold only on the civilian market. However, according to recent discoveries in the archives of the Confederation, Kofer received at least one order from the southern state government for 82 revolvers at $ 40 each, which were transferred to the 5th Virginia Cavalry.

After the end of the war, Kofer was listed as a gunsmith in the Norfolk-Portsmouth reference books from 1869 to 1875. He first worked in Market Square and then at 13 Union Street in Norfolk.

He died on July 23, 1885 at the age of 57 and was buried in the old Oak Grove Cemetery in Portsmouth. Oddly enough, his family remembers him not for being a gunsmith, but for inventing a mechanism for dispersing common houseflies.
Today, of course, we are accustomed to window grids, but then this invention of his enjoyed a moderate but success. From time to time, these machines can still be found in antique stores.

TV Kofer remains for us, in the final analysis, a figure visible through the "tarnished glass". He appeared only momentarily, thanks to a handful of revolvers and cartridges, his patent, several letters, army orders and court notices. But the fact that he also did something important on the way to modern and advanced small arms systems is undoubted. 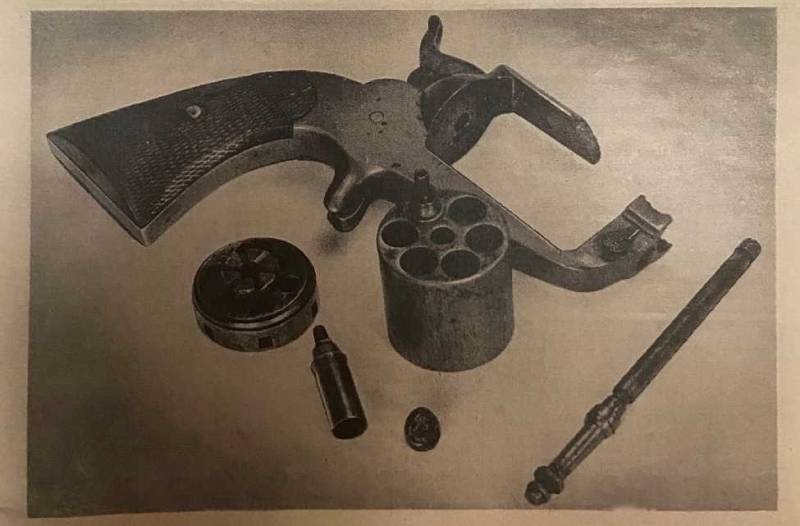 Disassembled Kofer revolver Type I. The structure of his drum is clearly visible. Only two of them have survived to this day - the 36th and 33rd caliber. How many of them were released in total is unknown.
Now let's see what is so special about Thomas Kofer? And how did he manage to get around Rollin White's seemingly impenetrable patent?

At first glance, this is a regular .36 caliber revolver with a simple shiny brass frame, a blued steel barrel and cylinder. The barrel is octagonal along its entire length, and the cylinder has six chambers. 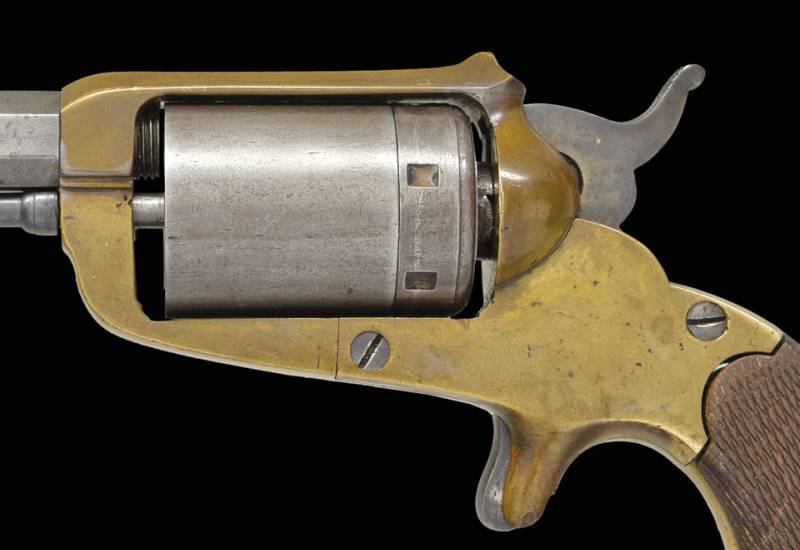 At first glance, the drum of a Kofer revolver looks like one whole. But in reality this is not at all the case.
Photo from the book "Long-Barreled Weapons and Confederate Pistols."
But the most interesting thing, however, is in the Kofer revolver inside the drum. The fact is that it consists of two parts and only the first part has chambers drilled through. The second part has a smaller diameter holes for the primers. Thus, being interconnected. Namely, this was the only way the Kofer drum could function without violating Rollin White's patent. 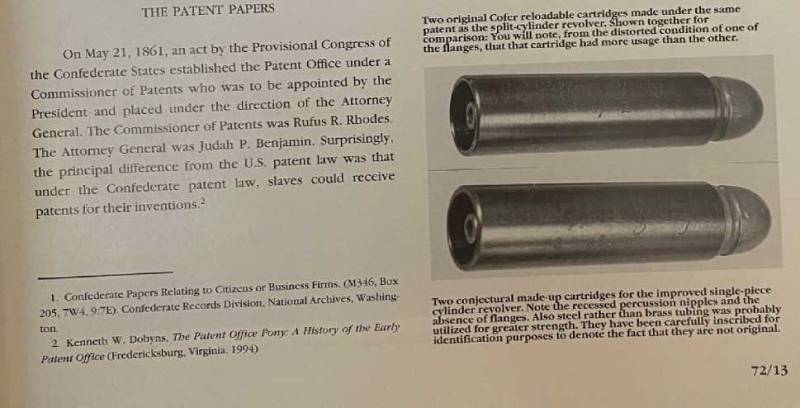 Cartridges of the second type.
Photo from the book "Long-Barreled Weapons and Confederate Pistols."
For this drum, Kofer also created special metal cartridges of two types at once.

In the first type, the cartridge had the form of a cylinder with a draft tube protruding from the back, on which a conventional capsule was put on. The cartridge itself was inserted into the front of the drum, but the brand tube with the capsule fell into the holes in the rear. It is believed that when assembled, such a cartridge was dangerous if dropped or hit. Therefore, a circuit cap was invented for the capsule.

On the second type, the manufacturer changed the shape of the sleeve, making a recess in its rear part, inside which the brand tube was located. Now she was protected from impact by the sides of the hull. For this cartridge, Kofer invented a revolver with a drum from one piece with holes of a smaller diameter in the back for brand tubes with primers. In fact, it was already a real unitary cartridge only now without a rim.

The improved design, in which the drum was a single piece instead of two parts, was embodied in Type II. Even fewer such revolvers have survived - only one. Since it does not have a serial number, the researchers assume that it was a prototype that never went into production.

Revolver Kofer, type III.
Photo from the book "Long-Barreled Weapons and Confederate Pistols."
The third type of Kofer revolver is a conventional capsule revolver with a recooler, similar to all other revolvers of that time. From most of the Kolt army revolvers, he, like all other Kofer models, differed only in the nipple trigger and a solid brass frame.

Stamp on the frame.
Photo from the book "Long-Barreled Weapons and Confederate Pistols."
To date, only 13 Kofer revolvers are known, about most of which there is practically no information. They are very rarely put up for sale by antique dealers, but if they do appear on the market, then their price is always higher than that of any other weapon of the Confederate States. It happens that they cost $ 100 or more.

More recently, an original rifle of his own design and under his own original cartridge was also discovered.

It was arranged very simply: a rectangular frame with the same through hole was screwed onto the table in the breech, in which the bolt moves across the body from right to left - a massive rectangular piece of metal drilled through for a long striker. At the bottom it has a leaf spring that holds the bolt in place. The hammer is located behind the frame. And that's all.

The identification mark is located on the left side of the block and includes the inscription “TW COFER” (inlaid with gold semi-italics) and “PAT. 12 august 1861 "above the inscription" PORTSMOUTH, VA ". (A notable feature of the lettering is that it turns upside down when the shutter unit is inserted in place.)

And the date of August 12, 1861 is significant in that Kofer on this day received a patent No. 9 of the Confederate States of America for his revolver.

However, what does the revolver patent have to do with this rifle? It is completely incomprehensible. Unless she fired his own revolving cartridges.

The author expresses his heartfelt gratitude to V.N. Popov for his assistance in preparing materials for this article, without which work on it could have dragged on for a much longer period.