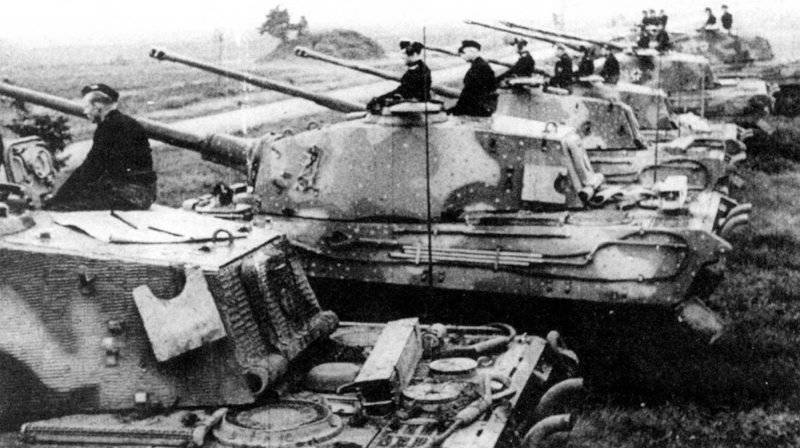 Tanks Pz.Kpfw. VI Ausf. In "Tiger II" of the 503rd battalion of heavy tanks during exercises at the Miley-le-Camp training ground in France in September 1944

Following the trend of improving the allies' tanks (first of all, the Soviet Union) in terms of increasing armor protection, the German command reasonably wished to strengthen tank weapons by adapting the strongest field towed 88-mm anti-tank guns adopted by 1943 for the year and better known as 43 XTNX and Cancer 43 / 41 (Panzerabwehrkanone). An armor-piercing projectile (weight 10,2 kg) produced from these guns with an initial speed of 1000 meters per second pierced 2 millimeters thick at an angle of 132 degrees to the normal at a distance of 30 thousand meters, and even more sub-caliber - more.

The technical specification for the car, which exceeded the "Tiger" in firepower and other parameters, was issued in August 1942 by Henschel and Porsche design offices, that is, long before the final development of the KwK43 gun. An important requirement was the rational location of the corps armor plates as on Soviet T-34 tanks.

F. Porsche and E. Aders again began the competition, whose car will be recognized as the best. As before, Porsche lost. He simply began to customize the Tiger to the new requirements. On the tank "type 180" in the turret, shifted forward, the designer offered to install the 150-mm cannon (L / 37) or 105-mm with the barrel length 70 klb. However, soon he left this venture and began to create VK4502 (P). But the great need for scarce materials, such as copper, put a cross on this tank.

The first sample of Aders was also rejected, but the second machine VK4503 (H) was adopted. The prototype was made in October 43-th year. True, Aders was asked to include in the car some successful constructive findings of the MAN company, which at that time was working on the Pz Kpfw Panther II. The customer required to unify the next generation of serial machines. 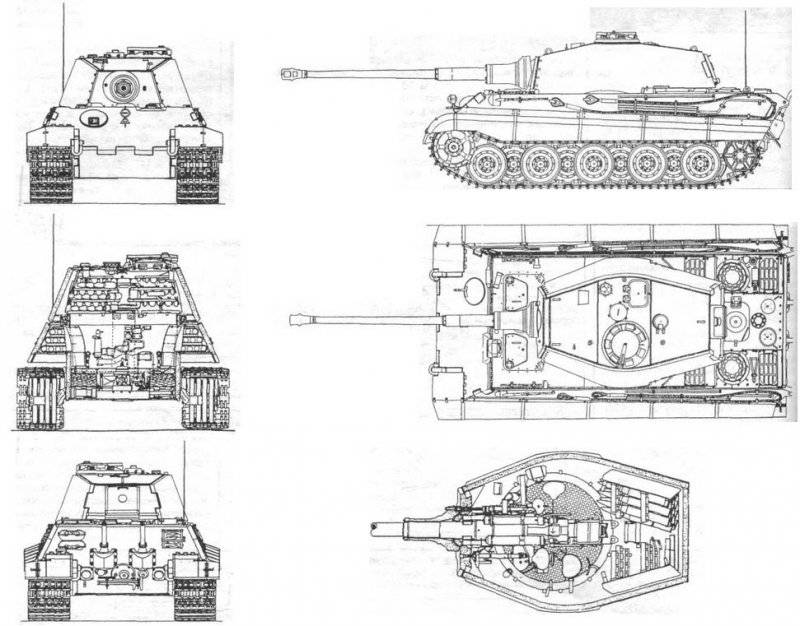 Production of tanks Pz Kpfw VI Ausf In the "Tiger II" Sd Kfz 182 (in the domestic literature known as the "Royal Tiger"), began in January 44-th year. At the beginning, two “sixs” left the assembly line of the Henschel company. Despite this, the Royal Tiger 1944 tanks were launched in 377, and 45 machines were launched from January to March in 112. Maximum production per month - 84 tank - accounted for August 44-th year. In total, 489 "Royal Tigers" was built.

The first 50 Pz Kpfw VI Ausf B had streamlined towers designed by Porsche. The base of the commander's turret protruded beyond the side wall of the tower. Noticeable "zaman" created a rounded frontal part of the tower. This specific term subtly characterized the main drawback of the design: the projectile, which fell into the sloping armor, ricocheted down and punched a thin cover of the hull. Since July, the cars of 44 of the year have begun to complete with a simpler tower of the Aders design, which in the frontal part had 185-mm armor instead of 100-mm at the Porsche tower.

In addition to the powerful gun, the Tiger II was distinguished by its booking and rational hull form. The upper front sheet, having a thickness of 150 millimeters, was set at an angle 50 ° to the vertical.

The 100-mm bottom sheet was installed at the same angle. On 25 degrees, the upper side walls were inclined, on 30 degrees, fodder armor plates, the lower ones were located vertically. The thickness of the hull walls was - 80 millimeters, the roof and the bottom - 40-42 millimeters; stern and sides of the tower - 80 millimeters. Sheet stern had a slope 21 degree. However, homogeneous armor (had a lower content of alloying additives due to a deficit associated with the loss of the Ukrainian raw material base) was inferior in terms of the projectile resistance of the armor used earlier on Elefants and Tigers. Before welding, the armor plates were connected in a complex way with the help of spikes, “dovetail” and the like.

The third part of the ammunition - 22 projectile unitary charge in a horizontal position - located in the stern large niche of the tower near the breech of the gun. This, together with the loading mechanism, facilitated the work of the loader and increased the combat rate of fire.

"Royal Tigers" were equipped with high-quality optical devices. The tank commander also had a panoramic artillery sight. Consequently, the firing range is now limited to only the maximum angle of elevation of the gun - 15 degrees (for comparison, the “Elephant” - 14 degrees., The “Tiger” - 10 degrees.).

In contrast to the "Panther" and "Tiger" tower did not have a polycom. The mechanical drive of the rotation of the tower (as in the "Tigre") was complemented by hydrostatic. The commander and the gunner could control the tower.

To reduce the gas content of the fighting compartment, there was a system for purging the bore of the cannon with compressed air after the shot before the shutter opened. The commander's turret was similar to the Panther turret. Through the hatch, made in the rear of the tower, made the replacement of the barrel of the gun, loaded ammunition. In addition, he served to leave the tank in an emergency. In the rectangular door there was a pistol embrasure. 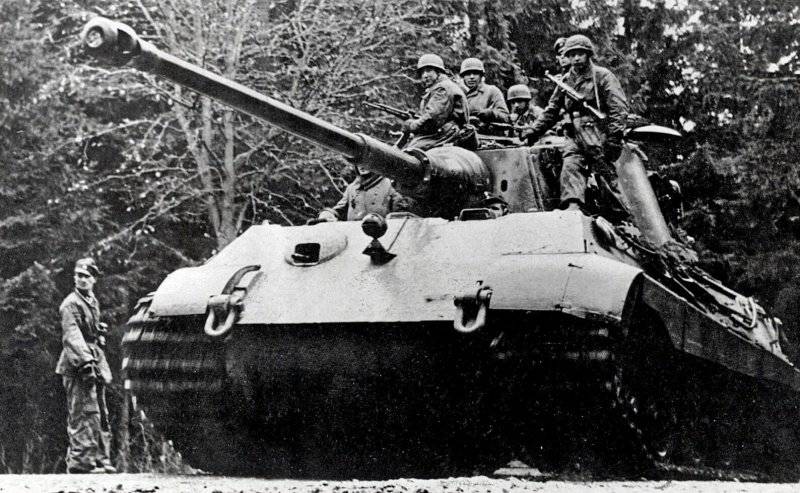 German paratroopers ride on the armor of the tank Pz.Kpfw. VI Ausf. B "Tiger II" ("Royal Tiger") during the offensive in the Ardennes

In the stern there was a power plant - “Maybach” HL230P30, the same as on the “Panther”. “Tiger” transmissions differed from each other only in some details: on the Ausf B, the turning mechanism lacked two degrees of freedom for straight-line movement. To control the rotation mechanism served as hydraulic steering wheel; backup was a mechanical drive.

More significant were the differences in the chassis. Dual rollers, having internal depreciation and a chess arrangement, did not enter the intervals with the neighboring blocks, but alternated on short and long axes of balancers. Suspension - single, torsion bar. The first and ninth nodes had hydraulic shock absorbers. Combat track width - 800 millimeters. When being transported by railways, they were replaced by narrow 660 vehicles with millimeters, external rollers were removed. The upper branches of the tracks were covered with screens that protected the machine from the cumulative projectiles.

In a duel battle, the Royal Tiger surpassed all tanks used in World War II. He had the greatest combat weight - 68 tons. Commander tanks were equipped with additional. radio station.

New tanks armed heavy tank battalions of the Wehrmacht and the SS troops. They fought on the Western and Eastern fronts, especially intensely in the 44 year in the Ardennes and in Poland. The last time these vehicles participated in the battle in the March 45 offensive in Hungary in the Lake Balaton region, where most of the Tiger II was destroyed by the Red Army. 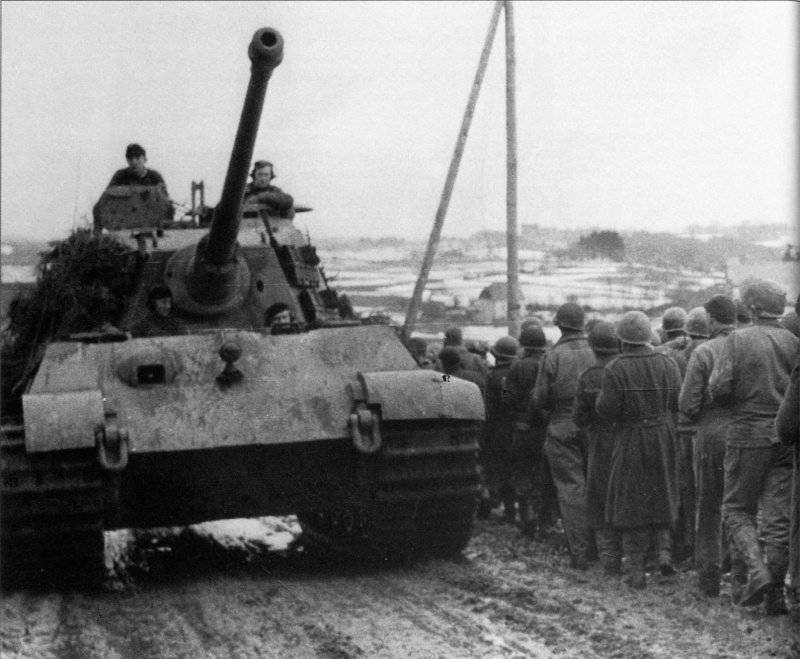 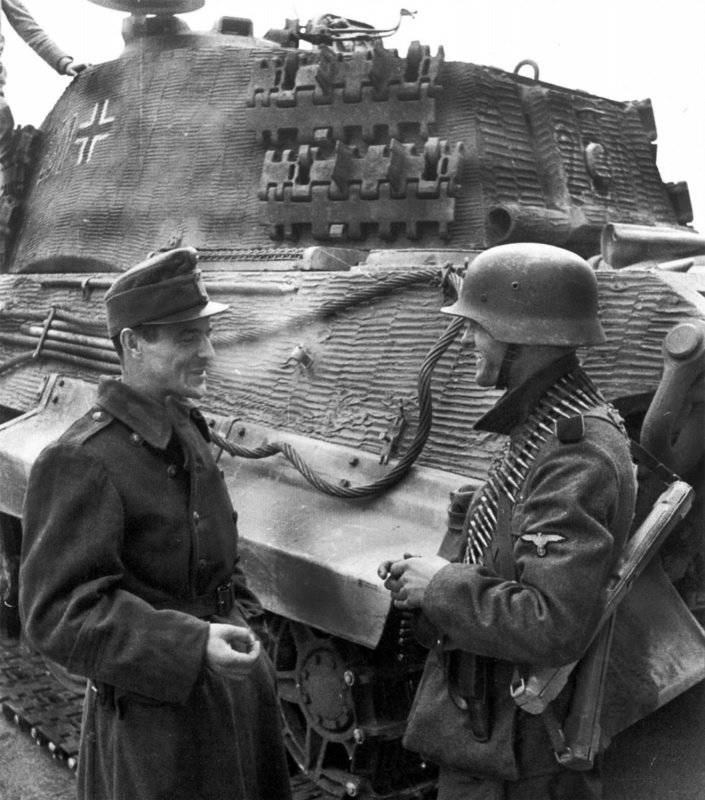 A Hungarian soldier smokes along with a member of the machine gun crew of the SS of the tank Pz.Kpfw. VI Ausf. B "Tiger II". Hungary. End of December 1944 of the year 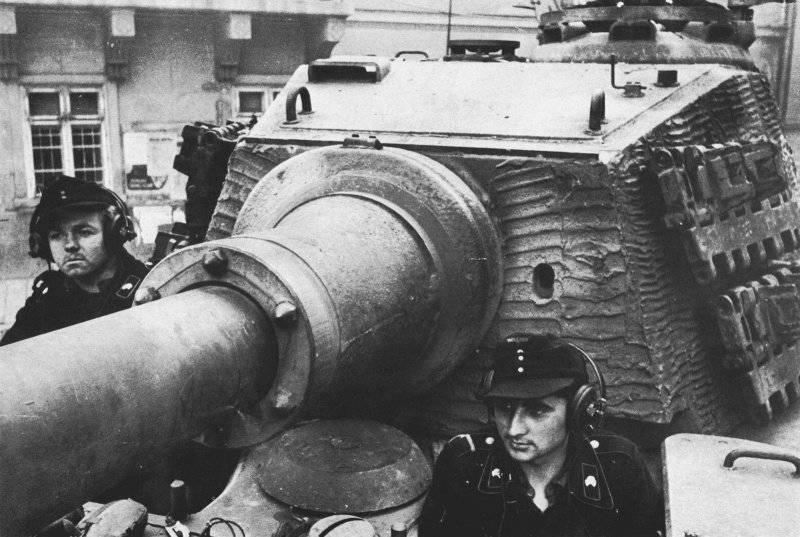 The crew of one of the German heavy tanks Pz.Kpfw. VI Ausf. B “Royal Tiger” of the 503 heavy tank battalion in Budapest, during Operation Panzerfaust 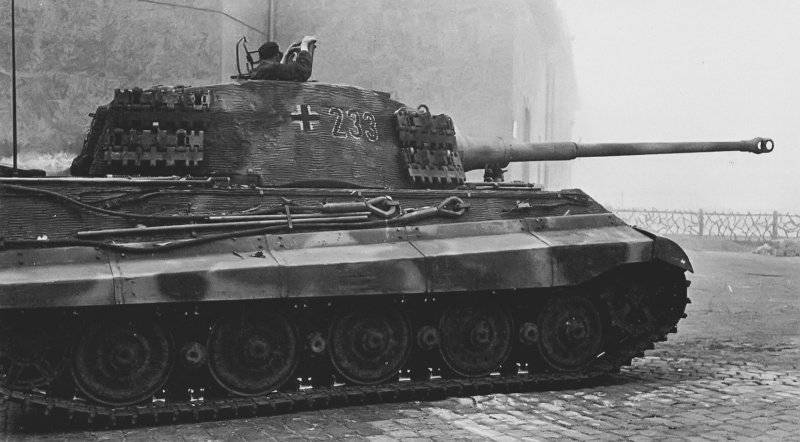 German heavy tank Pz.Kpfw. VI Ausf.B “The Royal Tiger” from the 503 heavy tank battalion in Budapest, during the operation “Panzerfaust” 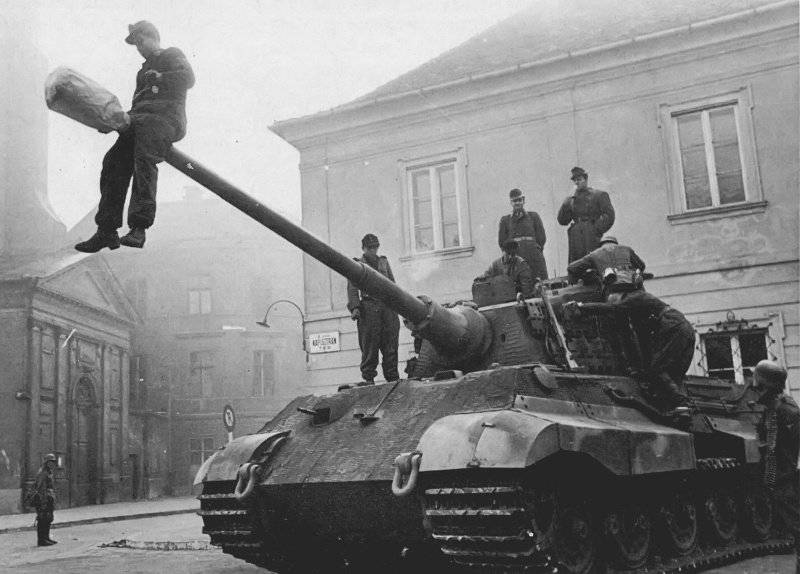 German and Hungarian soldiers at the tank Pz.Kpfw. VI Ausf. B “Royal Tiger” from the 503 heavy tank battalion in Budapest, during Operation Panzerfaust. In October 1944 of the year, the Germans, fearing the loss of the oilfields of Hungary, carried out a coup d'etat in Budapest, as a result of which power passed to Ferenc Salashi 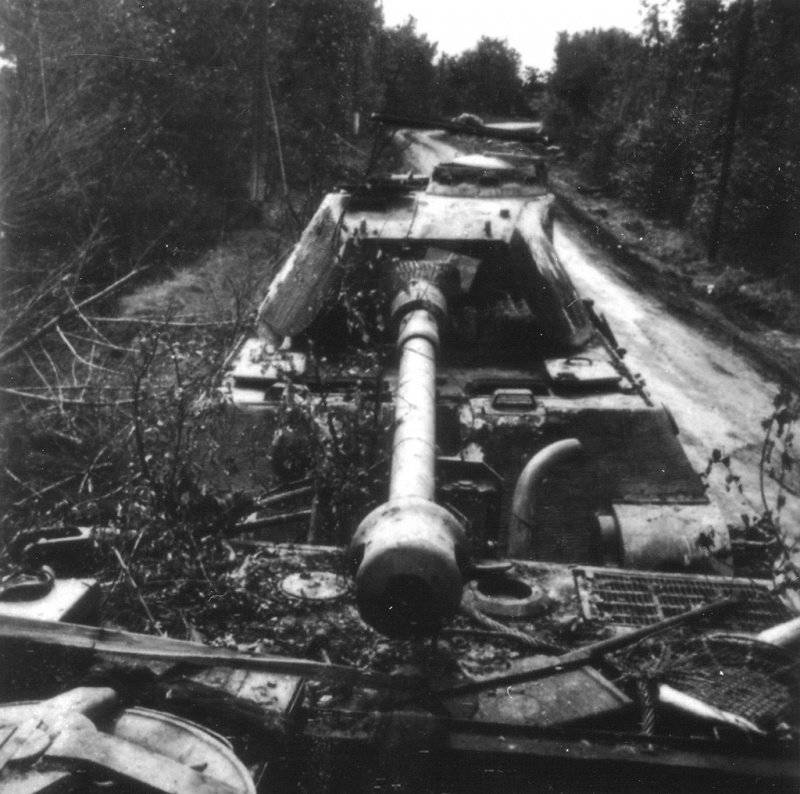 Tiger II (Pz.Kpfw VI Ausf. B "Tiger II" with a Porsche Tower) of the 1 Company of the 503 Tank Battalion (1./sPzAbt 503), burnt by the crew. The tank from the 503 th battalion was towed by the “Bergepanter” (evacuation vehicle based on the Panther tank), from which this photograph was taken 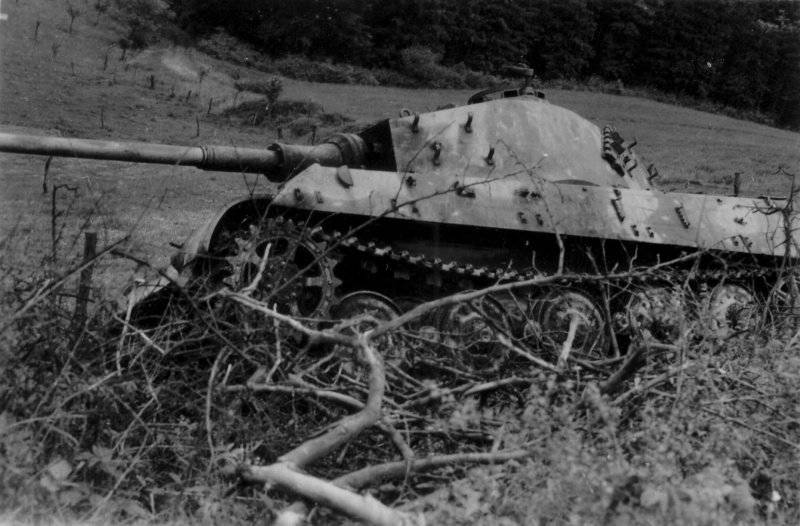 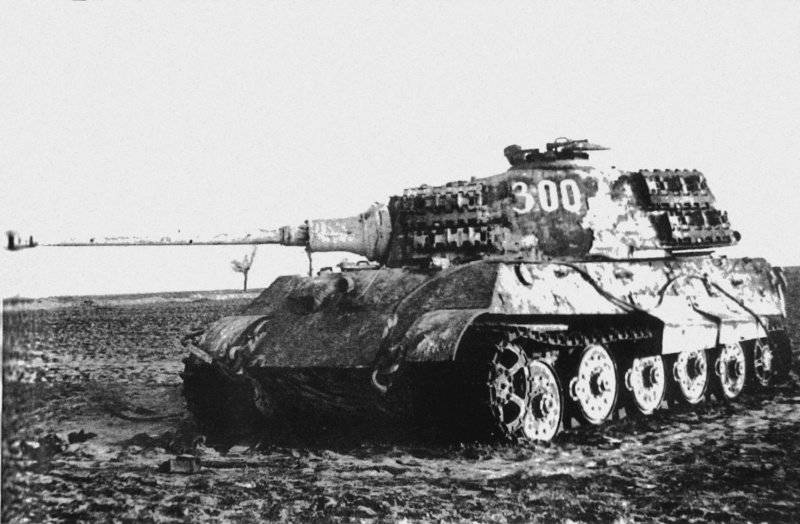 Downed German tank Pz.Kpfw. VI Ausf. B "The Royal Tiger" ("Tiger II") with the Soviet trophy number 300. The tank has traces of fire - detachment of the coating "zimemer" on the tower 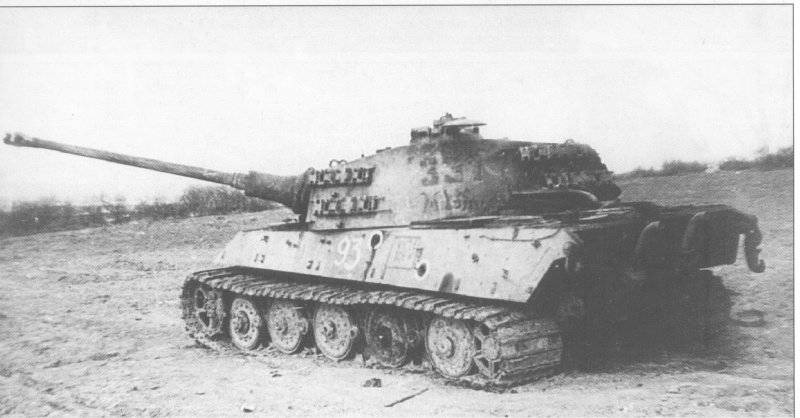 Shot in board Pz.Kpfw VI Ausf. B “Tiger II”, tactical number of 331, commander of 3 company Rolf von Westernhagen of 501 th battalion of heavy tanks, operating as part of the SS 1 th tank corps. Padded with battery SU-100 under the command of Captain Vasilyev (1952 th self-propelled artillery regiment). On board, you can see the number (93) of the Soviet trophy team. Hungary, Lake Balaton area 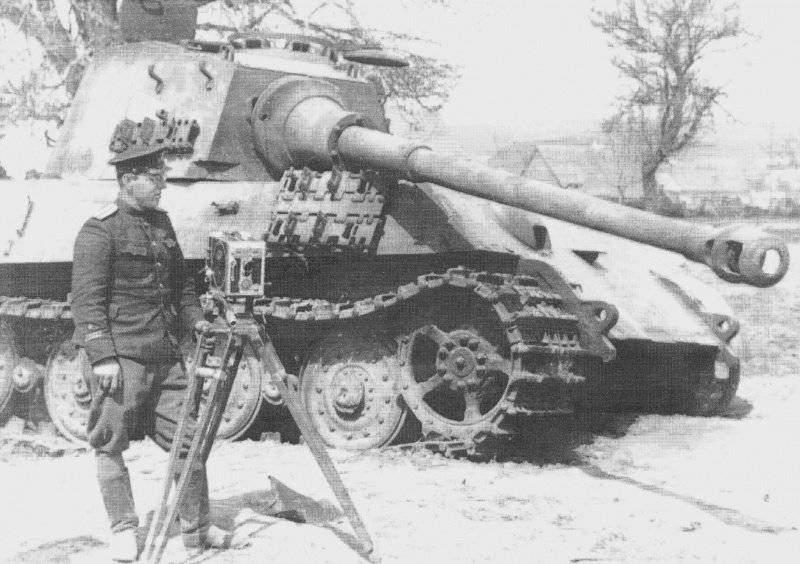 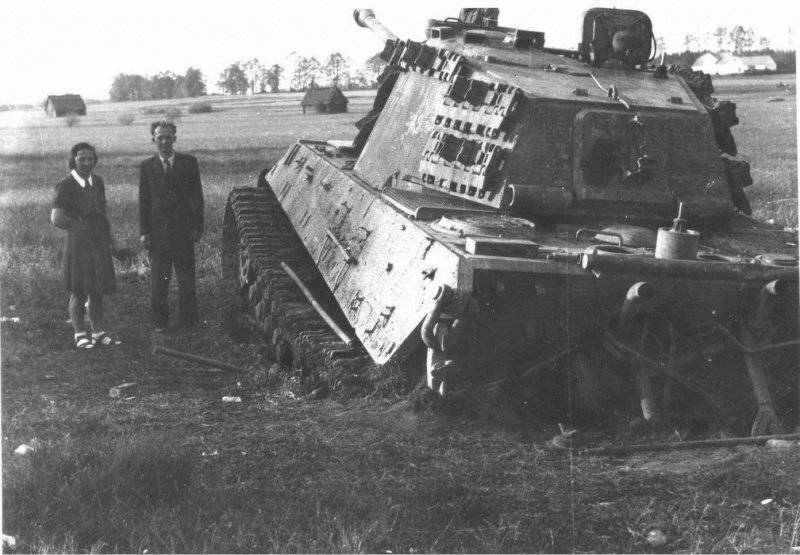 German heavy tank Tigr II, stuck in wet meadows. The surroundings of the Czech city of Trebon. May 1945 g 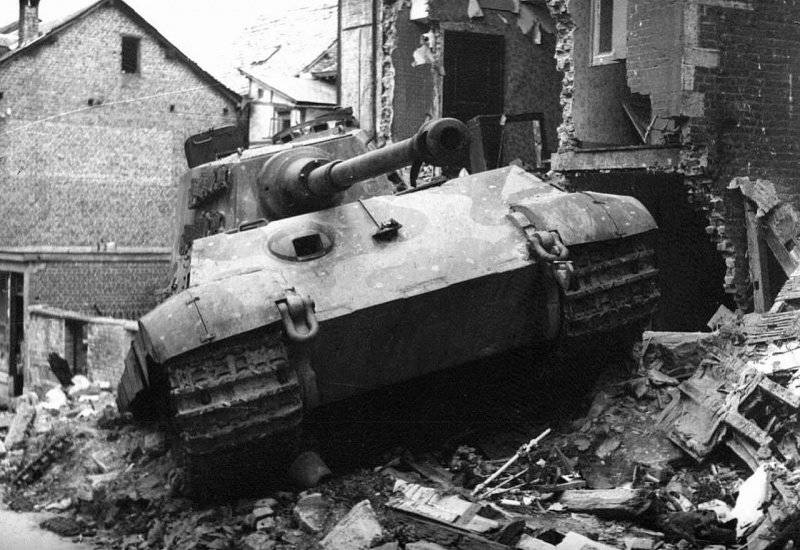 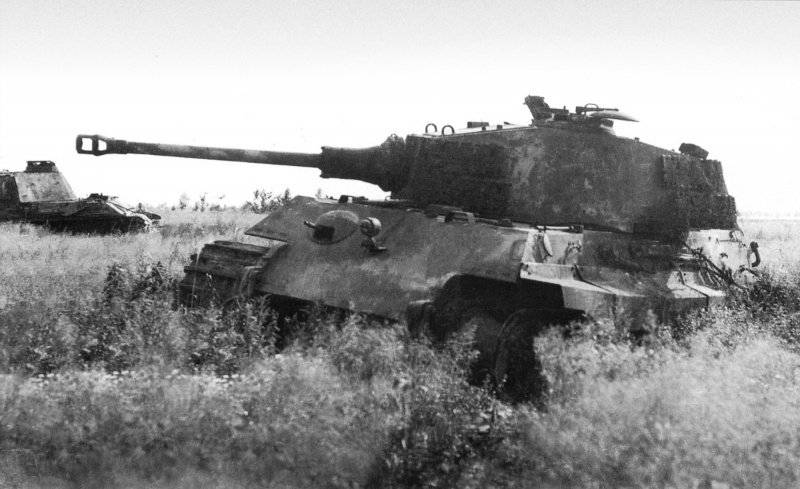 Downed German tank Pz.Kpfw. VI Ausf. B "Royal Tiger" №321 from the 502-th tank battalion with a gun from the tank "Panther".
On the morning of 28.03.1945, during a German counterattack near the village of Küstrin-Kitz (Küstrin-Kietz), the tank hit a mine, lost its course, but continued firing from a cannon. As a result, he was finished off with a trophy "faustpatron"; only one person remained alive from the crew.
Unusual tank armament is associated with difficulties supplying German troops in the last months of the war. Instead of the damaged original gun during the repair, a gun from the Panther tank was installed. 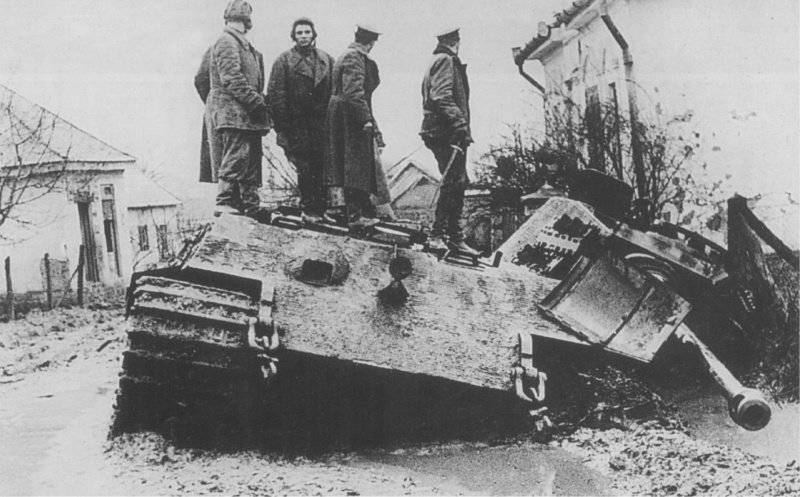 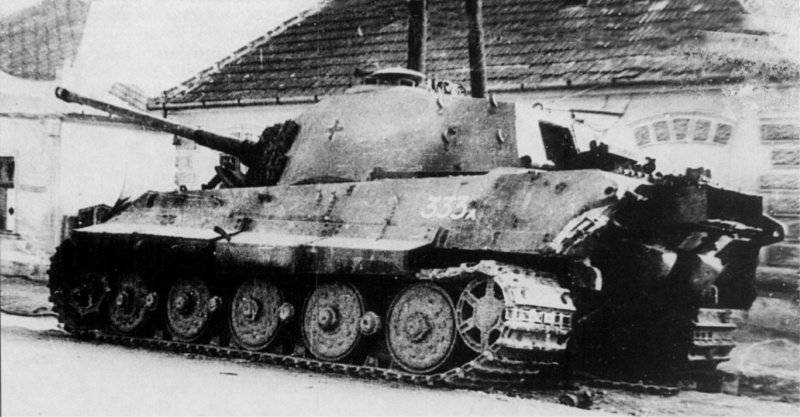 Heavy tank Pz.Kpfw. VI Ausf. B “The Royal Tiger” of the commander of the 3 Company of the heavy tank battalion “Feldhernhalle”, abandoned near the city of Székesfehérvár. The number of the Soviet trophy team "333" 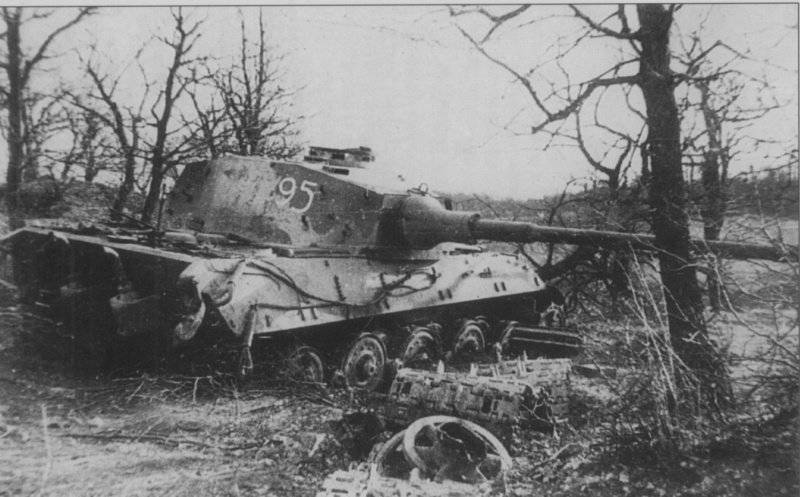 Heavy tank Pz.Kpfw. VI Ausf. B "Royal Tiger" from the 509 th heavy tank battalion captured by Soviet troops. The tank was abandoned without fuel, but the car was fully operational. White paint on the tank caused by Soviet soldiers to avoid a collision with a tank of vehicles during night driving. Budapest district 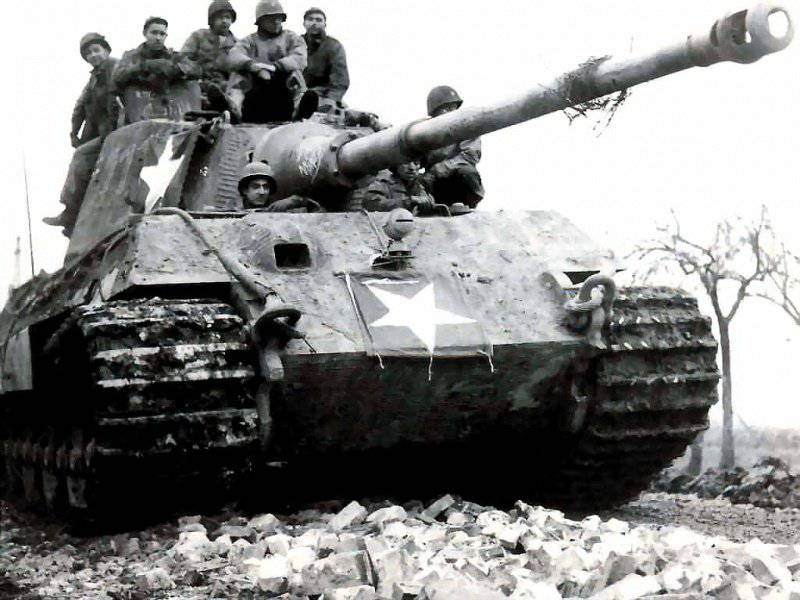 American soldiers on the captured German tank "Royal Tiger". The Royal Tiger with the tactical number 2-11 from s.Pz.Abt 506 was lost by the Germans 15 in December 1944 a day before the start of the Ardennes offensive. The tank was repaired by the American 129 repair battleground 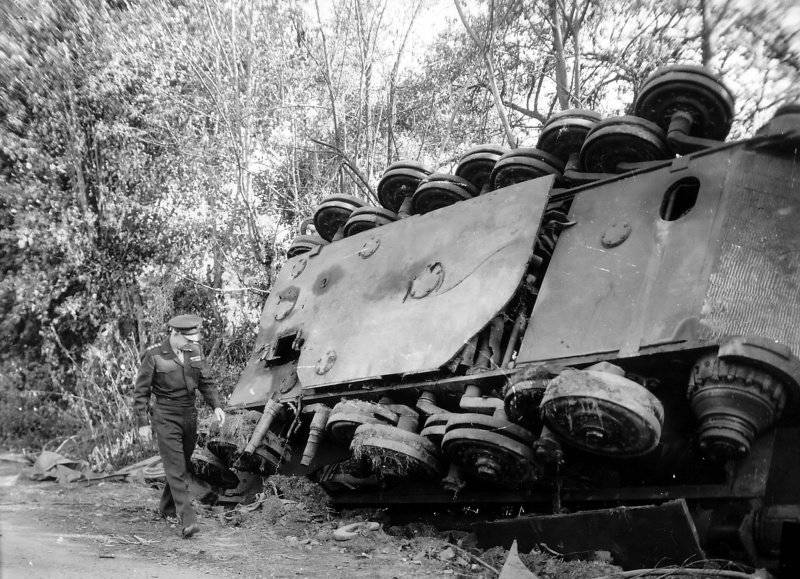