A dream plane, or What makes a Boeing in Russia

Behind the windows of the windows the fine rain is drizzling, the airliner is taxiing to the lighted runway and is preparing to make a rapid run. The engines began to whistle in take-off mode, the plane quickly picks up speed. Brushes frontal glazing frantically threshing, brushing raindrops, merging into thin streams. The line of speed of stopping takeoff has been passed, and the Boeing, to the applause of the crowd, breaks away from concrete, greedily gaining the first meters of height ...

So 15 December 2009 of the year at Payne Field Airfield (pc. Washington) made its first test flight Boeing-787 Dreamliner - the world's only wide-body airliner, whose fuselage is made of composite materials. The first novelty of the American civil aviation industry over the past 15 years has become an outstanding achievement in Russian engineering. Those applause at the Payne-Field airfield were meant precisely for our compatriots, because “Dream Liner” is in many ways a Russian project, largely designed in Russia, tested in Russia and made from Russian-made parts! 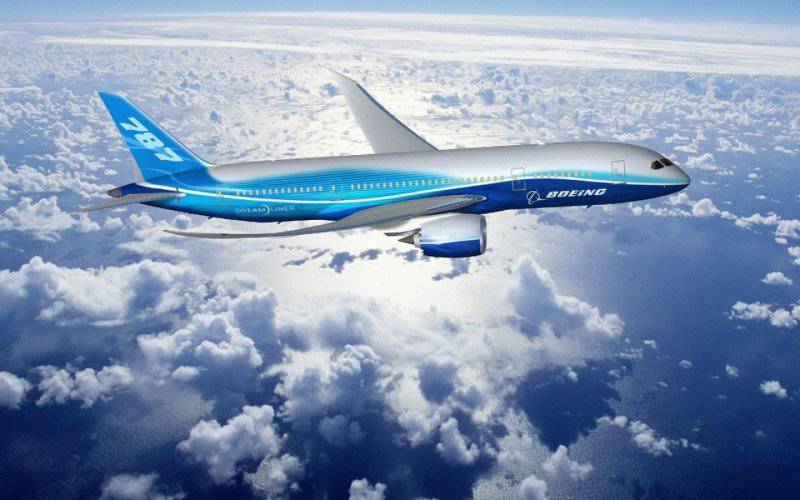 
Boeing Corporation - The Worlds Largest Manufacturer aviation, space and military equipment. The range of products is very wide: from civilian airliners, to cruise missiles, unmanned aerial vehicles and modules of the International Space Station. Among the most famous Boeing projects are the B-29 Super Fortress bomber, the B-52 Cold War symbol, Apache helicopter, Apollo spacecraft, Harpoon, Tomahawk and Hellfire cruise missiles, and the famous line airliners of the 700th series. The number of employees of the company is 158 thousand people.

Translation of design work in Russia "Boeing" began in the first half of the 1990-s. In 1998, the Moscow Design Center (MCC) was opened, in which all the 12 engineers from the Design Bureau named after N. S.V. Ilyushin. Ten years later, a small branch turned into the largest engineering center outside the US - today 150 staff members work at Boeing MCC, and more than 1000 employees from Russian design bureaus are involved in the design work on the topic “Boeing - Civil Aviation”. It looks like this: formally, Russian engineers work in Russian design bureaus, but the results of their activities, in agreement with the management of Russian companies, are transferred to the Boeing Center. Since 1998, Russian experts participated in 250 projects of American companies, including large-scale projects as 747 Boeing Converted Freighter, Boeing 737-900ER, Boeing 777F, Boeing 767-200SF / 300BCF, the new aircraft family 747 Boeing 747-8 and even flagship model - Boeing 787 Dreamliner. 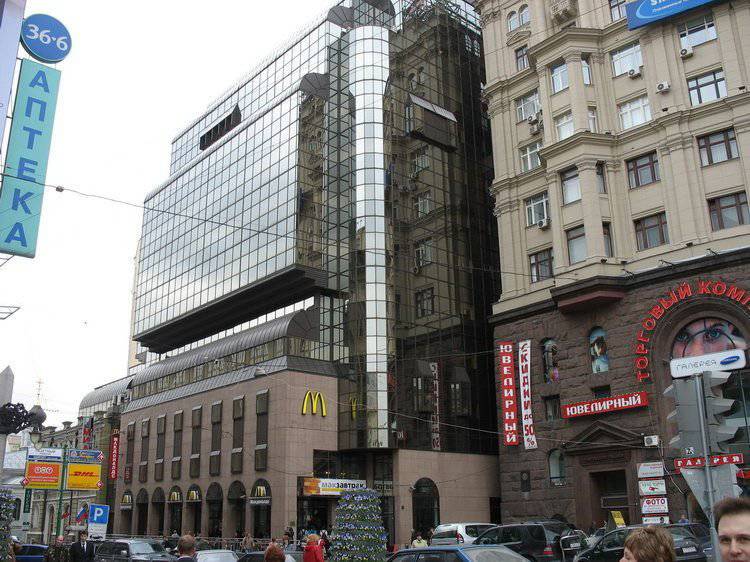 Center of Moscow, 17 / 9 Newspaper Lane. On the upper floors above McDonald's is the ICC "Boeing"

In 2004, Boeing and the Ministry of Industry and Energy of the Russian Federation signed a Memorandum on the participation of Russian industry in the creation of the Dreamliner aircraft. According to the president of Boeing Russia Inc, Sergey Kravchenko, the Dreamliner bow section was fully designed in Moscow, the drawings of most of the fuselage details were also made by Russian engineers at the MCC: wing mechanization elements, engine mounting pylons, and engine nacelles. According to Boeing, more than one-third of engineering calculations for the newest model of the Dreamliner were made by MCC specialists, and the level of participation of Russian specialists in the development of other aircraft types is about the same proportion. In 2006, the Boeing Center has received an AS / 9100 certificate confirming compliance with the highest standards requirements for aerospace enterprises. 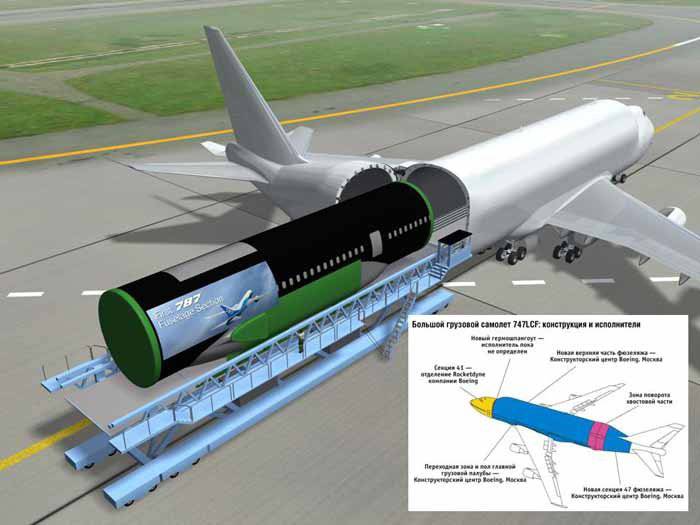 MCC Boeing is proud that its engineering projects at the beginning of the 2000-s allowed to return to the aircraft industry thousands of high-class Russian specialists who left the aviation industry and went into business in "dashing 90-e."

9 June 2008 of the Year “Boeing” and “Russian Aircraft Corporation” signed an agreement on expanding cooperation, which added the implementation of training programs for employees of domestic aerospace enterprises. Boeing factories in the USA regularly organize internships for Russian specialists. This allows domestic engineers to get to know and study in detail modern computer-aided design systems, to gain experience in the field of project management and quality control. But is everything so beautiful in reality?

The MCC is only an external attribute, the Boeing penetrated much deeper. Since 1993, in the suburban town of Zhukovsky, right inside the Central Aerohydrodynamic Institute (TsAGI), the Boeing Scientific and Technical Center has settled, to which services all the infrastructure, laboratories and stands of the Russian Scientific Center are the cradle of domestic aviation. And this is a lot - at the disposal of the institute more than 60 wind tunnels and test benches for strength studies, acoustics and aerodynamics of aircraft. Currently, Boeing is surely available any information from the archives of the once specially protected institute, American experts thoroughly studied all the old projects of Soviet scientists. Apparently, some of the "obsolete" developments of the USSR times are still of considerable interest - Boeing is willing to pay millions to ensure the smooth operation of its Scientific and Technical Center.

Americans have long considered TsAGI to be their property and manage their business inside the institute — they assemble the equipment they need and install stands for testing Boeing aircraft parts. 500 Russian specialists are involved in the work of the center: engineering and technical workers, scientists, programmers - employees of TsAGI - FSUE “Central Aerohydrodynamic Institute named after prof. N.Ye. Zhukovsky ”, CIAM - Federal State Unitary Enterprise“ Central Institute of Aviation Motors. P.I. Baranova ", Institute of Applied Mathematics. Keldysh and other institutions of the Russian Academy of Sciences.

Boeing saves a great deal on design development - the entire scientific and testing base went to the Americans almost for free, and Russian specialists need much less to pay than their overseas counterparts.

Boeing needs titanium. A lot of titanium. 7 July 2009 of the year saw the opening of the joint venture Ural Boeing Manufacturing on the basis of the industrial facilities of the Russian corporation VSMPO-AVISMA, Verkhnaya Salda, Sverdlovsk Region.
The Russian Corporation VSMPO-AVISMA is the world's largest manufacturer of titanium products with a vertically integrated technological process. Sponge titanium is used as the main component in the smelting of high-quality titanium alloys. The new plant, equipped with the latest technology, is engaged in machining of titanium forgings for Russian and American aircraft. Approximate production capacity - 74 tons of titanium products per month. Final processing of parts takes place at the Boeing plant in Portland (USA). 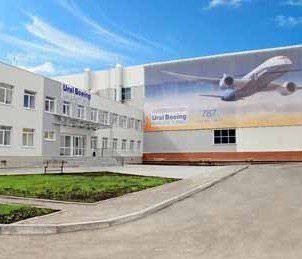 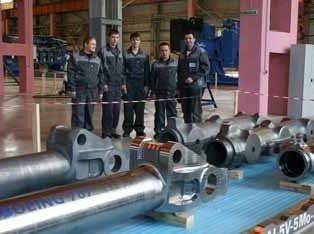 Joint venture in Verkhnaya Salda. Next to the photo are the power elements of the Dreamliner design

Over the next 30 years, the Boeing business development plan in Russia envisages investments in the amount of $ 27 billion, of which about $ 18 billion will go to purchase titanium products, $ 5 billion to purchase design services and $ 4 billion It is planned to spend on the acquisition of other types of goods and services produced by the aerospace industry of Russia.

Boeing is a serious company with a solid history and vast practical experience in creating outstanding projects. The financial potential of the industrial giant is almost not exhausted - Boeing is able to take on any project in the aerospace industry. This is a truly high level; Russian science deserves equal cooperation with such a partner! But can we really call our partnership relationship?
Thanks to the intervention of "overseas friends", hundreds of our engineers, the color of Russian science, were spared in 90-s from traveling with wide checked bags to China, continuing to do their favorite thing - Aviation. But to say that this is a great merit of the Boeing - at least not fair. "Boeing" only competently used the situation of the collapse of the Soviet Union and acted in its own interests. During 19 years of Boeing’s presence in Russia, local specialists got acquainted with the best American technologies. Billion investment in Russian industry, charity programs in Russia and the CIS. The World of Art Foundation, the Center for the Rehabilitation of Children with Oncological Diseases, adoption programs for orphans (the program “Kidsave International” is a permanent object of criticism), the Diagnostic Center at the City Children's Hospital of Verkhnyaya Salda.

And everything seems to be not bad. But it does not leave the feeling that behind the rubber smiles of Americans is a wolf grin. I take pride in the Russian scientists who create the most advanced civilian airliners in the world. Aircraft with a fuselage of composites - powerful, safe and economical? Very good. But why this “Boeing”, and not “Tupolev”? Russian science has reaffirmed its prestige ... but all profits have gone overseas. No, I am not against cooperation with foreign partners and exchange of experience in the framework of international research programs. But American specialists have been working at TsAGI for a long time, and why, for example, the Sukhoi Design Bureau does not have its own scientific and technical branch somewhere in the Waterton Canyon research center owned by Lockheed Martin Corporation ?!
We are ready to cooperate with honest partners. But this, I'm sorry, is a game with only one goal.