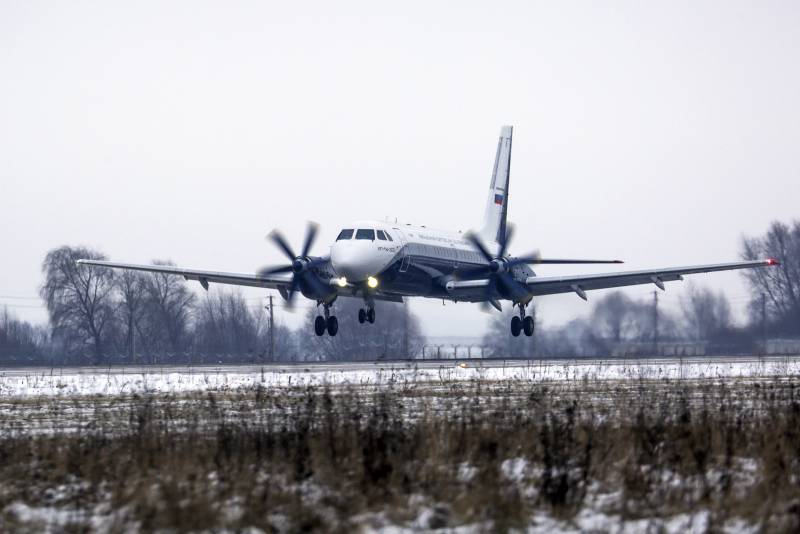 The first flight of the experienced Il-114-300. Photo of UAC

On December 16, the first flight of the IL-114-300 prototype passenger aircraft took place. In the near future, all the necessary tests will be performed, after which the liner will go into series and go into operation. Due to its high technical and operational characteristics, such an aircraft is of interest as a platform for creating specialized modifications, incl. military use.

The first version of the Il-114 project was created in the late eighties; the first flight of such a machine took place in 1990. Due to the characteristic factors of that time, the liner did not reach a large series - until 2012, less than 20 aircraft were built. In 2014-15. work began on a new version of the Il-114-300 airliner. To date, such an aircraft has been brought to flight tests, and in parallel, the United Aircraft Corporation and Ilyushin are preparing for serial production.

The new version of the project retains the previous layout and almost the entire airframe structure. Il-114-300 is a twin-engine low-wing aircraft with a straight wing and traditional tail assembly. A highly efficient wing with advanced mechanization and a reinforced landing gear are used, which ensures operation on concrete and unpaved airfields.

One of the foundations of the new Il-114-300 project is modern engines. A pair of turboprop engines TV7-117ST-01 with a capacity of 3100 hp is used. with six-blade propellers SV-34.03, as well as an auxiliary power plant TA-1. Modern engines are distinguished by higher technical characteristics and increased efficiency. 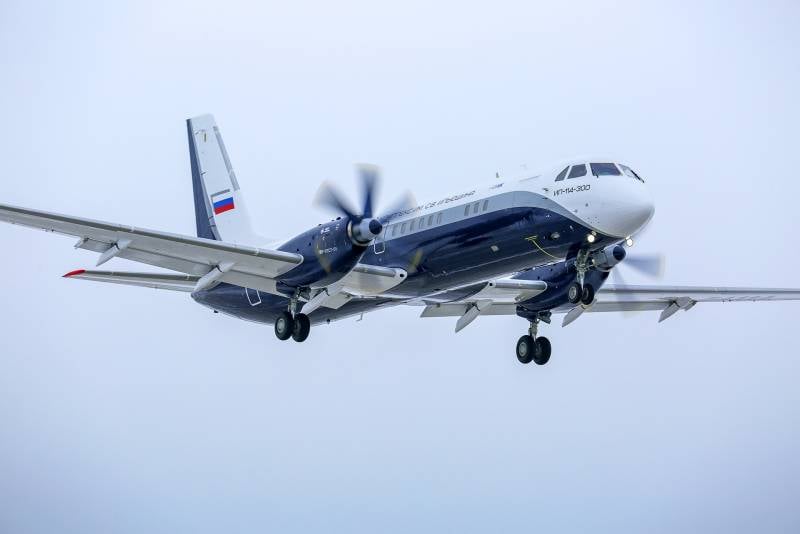 On December 16, the main systems of the aircraft were tested. Photo of UAC
The aircraft is equipped with a modern fully digital flight and navigation system TsPNK-114M2. General aircraft systems have undergone serious processing with the use of new units. This simplifies operation with a simultaneous increase in key indicators.

Suggestions of the past

The Il-114 was originally developed as a passenger aircraft, but it was also considered as a platform for new modifications for various purposes. The issue of using different engines was being worked out, and in addition, an Il-114LL flying laboratory was built to test new avionics. At the level of proposals and projects, there were also military modifications with different functions and tasks.

In the mid-nineties, a cargo modification of the Il-114T was developed, which was of interest to both commercial carriers and the army. It featured a cargo compartment with appropriate equipment. To carry out loading and unloading operations behind the wing, on the left side, a large door was provided. The project was brought to flight tests, but then work stopped.

It was proposed to use high performance characteristics in the interests of the sea aviation... A project was proposed for the Il-114MP patrol / anti-submarine aircraft. It could carry radar, sonar buoys, magnetometer and other equipment for searching surface ships and submarines. It also provided for the installation of a variety of weapons - anti-ship missiles, torpedoes, etc. 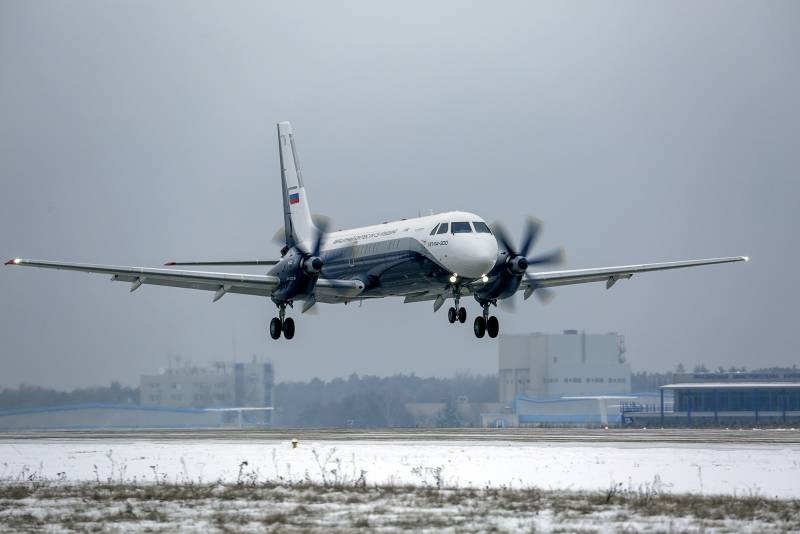 New flights are expected in the near future. Photo of UAC
A simplified version of the Il-114MP - Il-114P was proposed. It was a patrol aircraft for the observation and protection of territorial waters and the exclusive economic zone. With the help of the Strizh multicomponent complex, he had to keep track of surface objects. Anti-submarine capabilities and weapons were not provided.

By installing the appropriate equipment, the base liner could be turned into a jammer or an electronic reconnaissance aircraft. Similar issues were worked out within the framework of the Il-114PR / PRP project. The Il-114FK project was proposed. Such an aircraft should have been equipped with photographic equipment and other devices for mapping the area. The materials on the Il-140 project were demonstrated - a long-range radar detection aircraft with a characteristic "mushroom" above the fuselage.

Thus, the fundamental possibility of rebuilding the base IL-114 liner into vehicles for a different purpose existed and was being worked out. It is obvious that the modern Il-114-300 has the same capabilities. At the same time, higher technical and operational characteristics will provide interesting results, increasing the overall efficiency of specialized samples.

In the existing configuration of a passenger aircraft, the new Il-114-300 is of certain interest to the Russian Ministry of Defense. To carry out the transportation of the army, vehicles of this class are needed, and the existing fleet is distinguished by a high average age. At the same time, the Air Force in the future may order not only a passenger, but also a possible cargo modification. With the help of the new Il-114-300, it will be possible to replace the outdated An-24 and An-26. 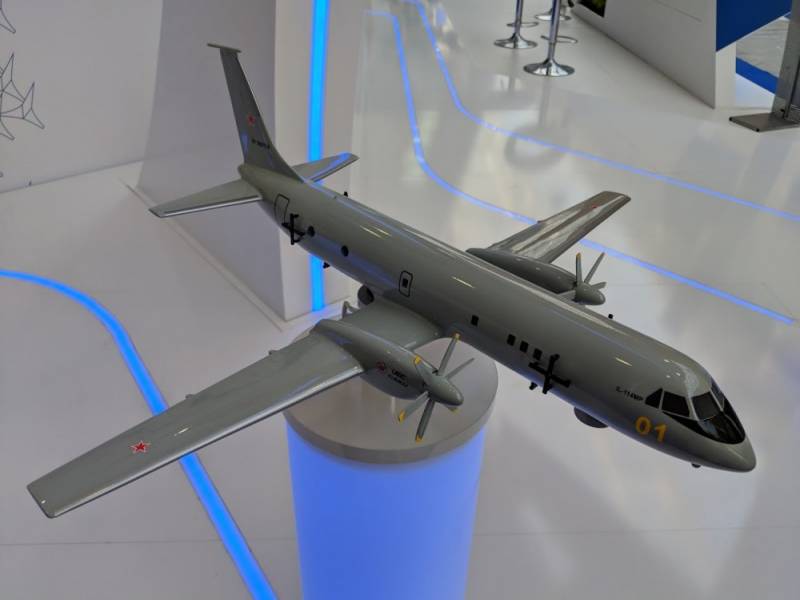 Exhibition model of anti-submarine Il-114MP. Photo Vpk.name
It can be assumed that in the near future the idea of ​​a patrol / anti-submarine aircraft based on the liner will be developed again. Last year, the Ministry of Industry and Trade announced plans for the future replacement of existing ASW aircraft. In a short time, aircraft manufacturers had to submit their proposals, and by the end of the year, the ministry planned to choose the best ones. New messages about this project have not yet been received, which allows making forecasts. In particular, it can be expected that the industry has recalled the old Il-114MP project and proposes to implement it at a new technical level.

High flight performance in theory allows the Il-114-300 to be used as a base for air command posts, RTR and electronic warfare aircraft and other specialized equipment, and similar ideas have already been worked out. Whether they will return to these projects is unknown. It should be borne in mind that such a step will have serious positive consequences.

If the Ministry of Defense decides to purchase Il-114-300 aircraft of various modifications, it will not be able to quickly obtain all the desired aircraft in the required quantities. Such rearmament and re-equipment of the Air Force and other structures will face a number of objective limitations and difficulties.

First of all, the difficulty is the unavailability of the base machine and the actual absence of its specialized modifications. According to current plans, testing of the prototype Il-114-300 will continue until 2022, at which time the aircraft will receive a certificate. Serial production will begin in 2023. UAC says about the possibility of building 12 aircraft annually. At the same time, there are already preliminary agreements for several dozen machines, and their implementation will take several years. 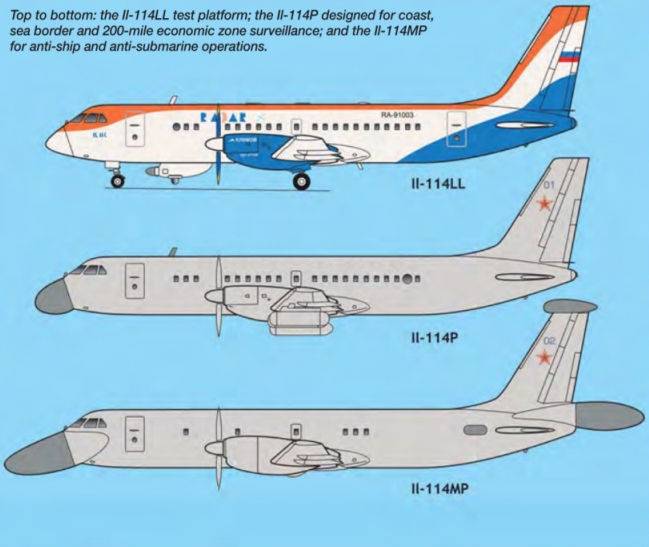 It is important that the real prospects for the projects of the hypothetical IL-114-300 family have not yet been determined. The Ministry of Defense has not yet disclosed its plans in this direction. It is quite possible that the aircraft will not interest the military as a platform for specialized equipment and will not receive appropriate development.

The prospects of the Il-114-300 in its original passenger modification are obvious. In the coming years, this aircraft will be successfully tested and fine-tuned, after which the series will start and full-fledged operation will begin in several civilian airlines. The new aircraft will close one of the most important niches and reduce the dependence of Russian transportation on foreign products.

In the context of military use, the future of the Il-114-300 remains unclear. It may be interesting in the original modification and in the form of special versions - but there are no orders for them at the moment. Moreover, it is not yet clear whether they will appear in the future. Most likely, the situation will become clearer in the future, when the new civilian aircraft is ready for production and operation.