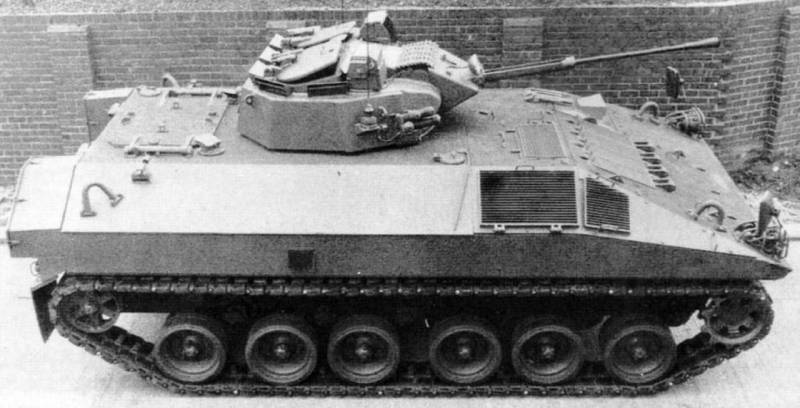 In 1986, GKN manufactured the first production FV510 Warrior infantry fighting vehicle. In the following years, several hundred armored vehicles of the main modifications of this family, as well as a number of prototypes, rolled off the assembly line. The equipment of the Warrior line is still in service with the British army, and in the near future it will have to undergo major modernization.

War machine of the eighties

Research work on a promising infantry fighting vehicle, the end result of which was the appearance of the Warrior family, started in the early seventies. Their launch was associated with the appearance of a potential enemy of a large number of modern infantry fighting vehicles. The British command considered the available armored personnel carriers to be insufficiently perfect and launched the development of their own BMP.

Research was carried out within the framework of the MICV (Mechanized Infantry Combat Vehicle) project. Quite quickly, its participants proposed several basic concepts, incl. using the most modern solutions. By the middle of the decade, the army had selected two of the most successful preliminary projects - they were presented by GKN and Vickers Defense Sysems.

The first production BMP Warrior, 1986 Photo Thinkdefence.co.uk
In 1977, the project from GKN Sankey was chosen as the winner of the competition. In 1977 and 1980. the company received two contracts for full-scale project development, construction and testing of a prototype, as well as for the preparation of a future series. The first prototype of the BMP was launched for testing in 1981. The next few years were spent on fine-tuning and improving it in order to obtain an appearance that completely suits the army. For testing, 14 prototypes were built in different configurations.

At this stage, the development of unified armored vehicles started. On the basis of the BMP, it was proposed to build equipment for various purposes, from command and engineering vehicles to carriers of various weapons. Not all such samples passed further tests, however, in this case, it was possible to form a full-fledged unified family of equipment.

The first order for mass production appeared in 1984. In accordance with it, the GKN company was supposed to build 280 armored vehicles of several versions, mainly BMP. When launched into the series, the new line of vehicles received the common name Warrior.

The basis for the BMP and other vehicles of the Warrior family is a front-engine tracked chassis with a large habitable compartment in the central and aft parts. The infantry fighting vehicle and some other samples were to receive a tower with weapons and target equipment. Other projects involved the installation of other equipment. 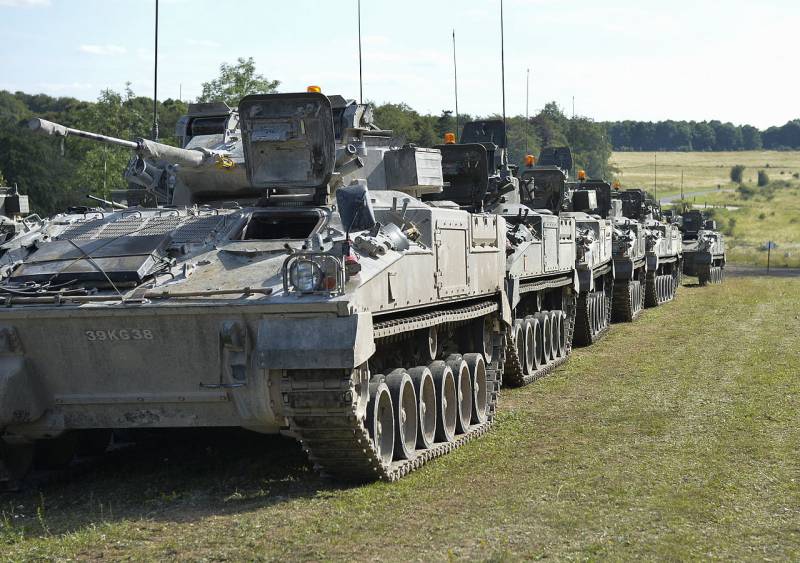 FV510 armored vehicles in training. UK Department of Defense Photo
The chassis body was made of aluminum alloy and assembled from parts of relatively large thickness. Such armor is capable of withstanding a 14,5mm bullet hit from front corners or smaller caliber bullets from all projections. Mine protection - up to 9 kg under the track. Initially, it was possible to supplement the standard armor with overhead elements. Subsequently, this opportunity was repeatedly used.

The universal chassis received a 8 hp Perkins CV-550TCA Condor diesel engine. and a General Motors X-300-4B automatic transmission. For some units of the power unit, the Warrior family was unified with other British armored vehicles. The undercarriage on each side had six road wheels with torsion bar suspension. All these components provided a top speed of 75 km / h (up to 35 km / h on rough terrain) and a cruising range of over 600 km.

The main model of the Warrior family was initially seen as the BMP, which received the FV510 index. This vehicle is equipped with a two-man turret with a 30-mm L21A1 RARDEN cannon and an L94A1 machine gun on an unstabilized mount. The vehicles of later releases were supposed to receive TRIGAT anti-tank missiles, but then they were replaced by imported MILAN ATGMs. Recent upgrades include the installation of the Javelin ATGM.

British infantry fighting vehicles in Afghanistan. The machines are equipped with additional protection. UK Department of Defense Photo
The own crew of the BMP FV510 consists of three people, the driver, the commander and the gunner. The aft troop compartment accommodates seven soldiers. Disembarkation is made through the aft door or overhead hatches. To increase the level of protection, it was decided to abandon the embrasures for shooting from personal weaponsthat weaken armor.

The FV511 command vehicle replicates the BMP design as much as possible, but has a different equipment for the troop compartment. It accommodates commanders' workplaces and communications equipment. Two modifications of the KShM were proposed for use at the company and battalion level; they differed only in the composition of the radio equipment.

On the platform, two repair and recovery vehicles were performed - FV512 and FV513. They were equipped with a 6,5 t crane, a winch with a force of up to 20 tf, a thrust coulter, etc. There were tools and parts on board for minor repairs of armored vehicles. Such ARVs could serve both the equipment of its own family and other armored vehicles, incl. MBT.

The FV514 reconnaissance spotter was intended for the artillery formations. He received more advanced means of navigation and communication. The standard optical devices in the turret were replaced with more efficient ones. The car lost its cannon, and a model was installed instead. A mast for the MSTAR radar antenna device appeared on the tower. The landing capabilities were abandoned. Also, a mobile command post for the FV515 artillery was developed, designed to control the battery of the AS90 self-propelled guns. It differs from a conventional KShM in the composition of the target equipment located in the troop compartment. 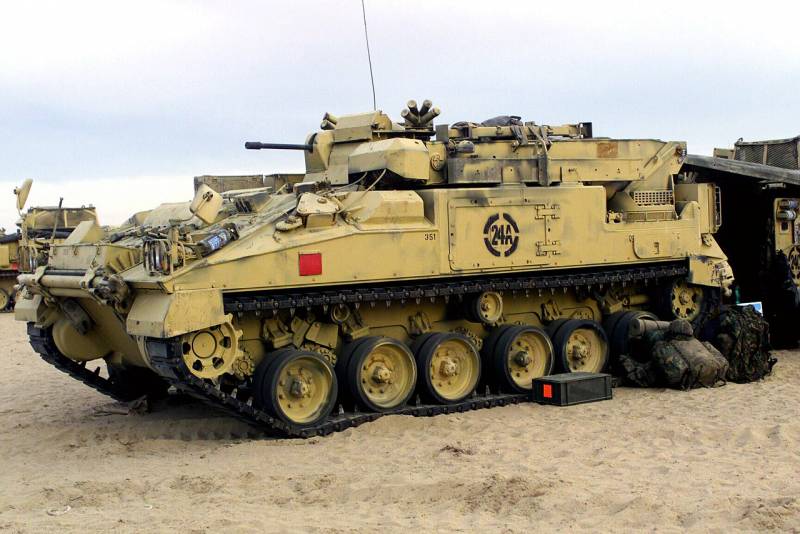 BREM FV512. US Department of Defense Photo
On the basis of the Warrior platform, several other samples were also developed that did not reach the series. The proposed armored personnel carriers with a machine-gun turret, self-propelled anti-tank systems with different weapons and options for its placement (on the roof or on a lifting boom), carriers of large-caliber guns and mortars, engineering vehicles, etc.

Equipment for the army

In the early eighties, the British army planned to purchase up to 1800 armored vehicles of a new family, which would allow the older vehicles of the FV432 line to be removed from service. However, the high cost of the new "Warriors" forced the purchase plans to be reduced to 1050 units. and provide for the preservation of old technology. In the future, the plans were again adjusted downward. As a result, a new problem emerged. Instead of maximum unification, the army would have to be armed with three different families of light armored vehicles at once - CVR (T), FV432 and Warrior.

The first order from 1984 provided for the delivery of 280 armored vehicles, mainly in the FV510 configuration. These products began to be handed over to the customer in 1986, and soon the first combat units mastered them. Later, another order appeared, and by 1990 the number of BMPs was brought to 384 units. After the Gulf War, the British army ordered 108 armored vehicles with some modifications - at this stage, the Warriors were first equipped with missiles.

In accordance with several orders of the eighties, 84 KShM FV511 were built. The total number of FV512 and FV513 ARVs exceeded 145 units. Artillery troops were transferred to 52 reconnaissance spotters and 19 command posts. 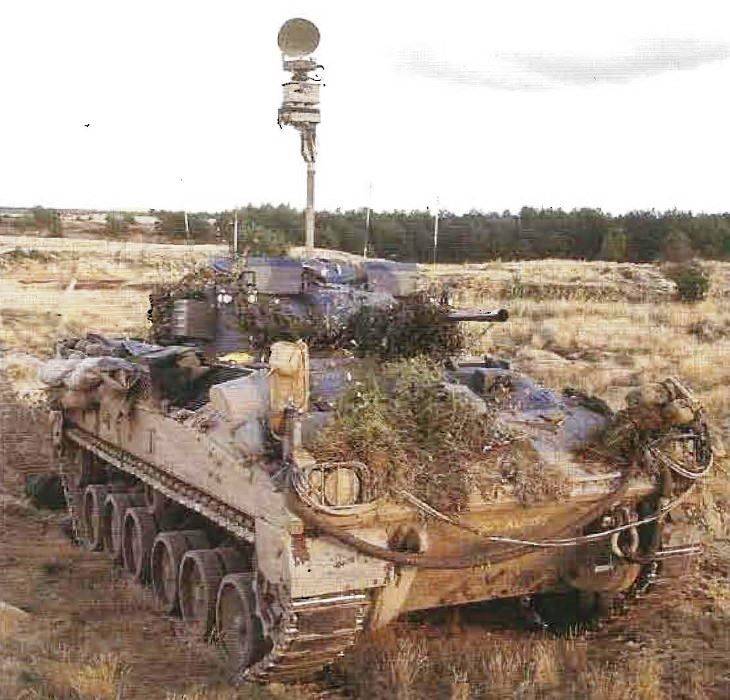 Artillery reconnaissance vehicle FV514. Photo Pinterest.com
In 1993, the only export contract was signed. Kuwait has purchased over 250 vehicles in the Desert Warrior version. They differed from the basic modification with a new turret with a 25 mm M242 cannon, TOW missiles and a new climate system adapted to the harsh conditions of the Middle East.

Warrior armored vehicles of all serial types were actively used in various exercises, and since the early nineties they took part in hostilities several times. They were used during the Gulf War, in the Yugoslav NATO operation, in Afghanistan and Iraq. In general, the results of combat use were good, but not without losses. At the same time, a significant part of the damage and loss of equipment was associated with friendly fire. Also, several cars were blown up by improvised explosive devices.

Real application has led to the emergence of new improvements. Additional means of protection in the form of hinged panels and screens were actively introduced. In addition, an ambulance was created based on the results of the first months of work in Afghanistan. Weapons and landing spots were removed from the standard FV510 BMP. In the vacated volumes, a medic, a stretcher and seats for the wounded were placed.

Since the late eighties, the VERDI (Vehicle Electronics Research Defense Initiative) modernization project has been developed. It provided for the installation of a chassis information and control system, a radical modernization of the fire control system, the use of new means of communication, etc. Among other things, a mast with day and night cameras was installed on the roof of the tower to increase situational awareness. 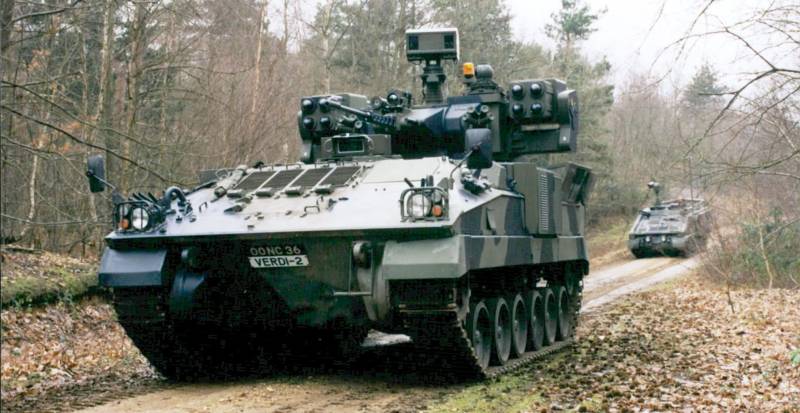 Experienced BMP VERDI-2. Photo Thinkdefence.co.uk
The VERDI-2 project, presented in 1993, developed these ideas with newer components. Due to the new modernization, it was possible to reduce the crew to two people and place it in a protected compartment in the center of the hull - without loss in combat effectiveness. Despite the obvious advantages, VERDI projects were not approved for implementation in practice. However, some of their components and solutions have found application in the following projects.

Since the beginning of the nineties, the issue of equipping the combat versions of the "Warrior" with a new turret with a 40- or 45-mm cannon for telescopic ammunition has been considered. Currently, these ideas are being implemented in the Warrior Capability Sustainment Program (WCSP), which aims to keep such armored vehicles in service until 2040. The Warrior CSP project also proposes the installation of new electronic devices, modernization of the power plant, etc.

Lockheed Martin is responsible for the development of the updated BMP. At the moment the WCSP program is at the testing stage. It is planned to spend another 2-3 years on them, after which conclusions and decisions will be made. Upon receiving a positive conclusion, 380 cash BMPs will be upgraded. The work is scheduled to be completed by the end of the decade.

The main task of the MICV / Warrior program was to create a promising infantry fighting vehicle, as well as a family of unified armored vehicles for various purposes. In general, it was possible to solve it and launch the rearmament of the ground forces, and not only motorized infantry units. For their time, the samples of the family showed very high characteristics and met the basic requirements. 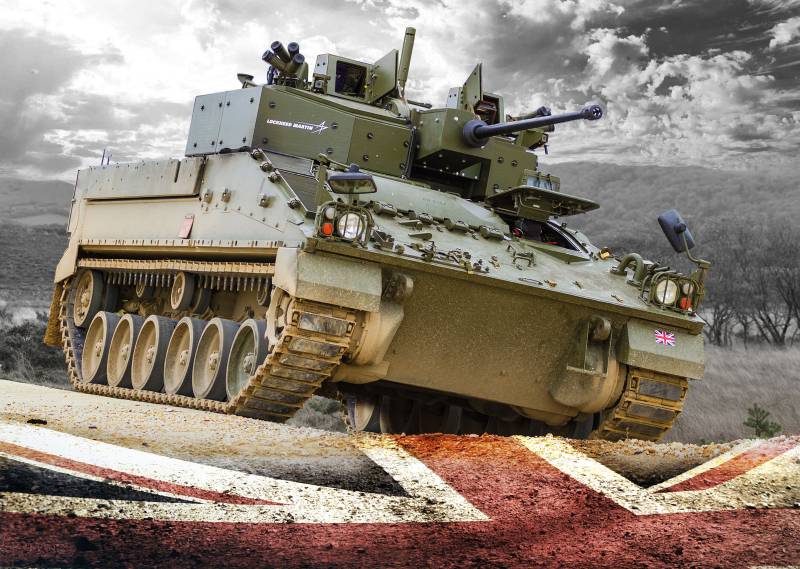 Lockheed Martin Warrior CSP promotional image
Initially, it was supposed to build 1800 new armored vehicles and, due to this, to decommission outdated samples. By switching to the equipment of one family, the army could achieve great savings. However, such plans were quickly abandoned, and three platforms of the same class were at once in service. This made operation and procurement difficult.

The current plans are for the Warrior line to remain in service, with a new Ajax family being added in the future. As a result, the complete transition to one platform is canceled again, and with it the desired savings on joint operation of equipment disappear.

Thus, the tasks of the Warrior program were only partially solved, but the army received significant quantities of new armored vehicles, updating the materiel and increasing the combat capability of the motorized infantry. Almost 35 years have passed since the beginning of the service of these vehicles, and the army is in no hurry to abandon them. After the planned modernization "Warriors" of the British army will be able to celebrate 55 years of service.