Comparison of the armies of Russia and the United States in 2020. Air Force 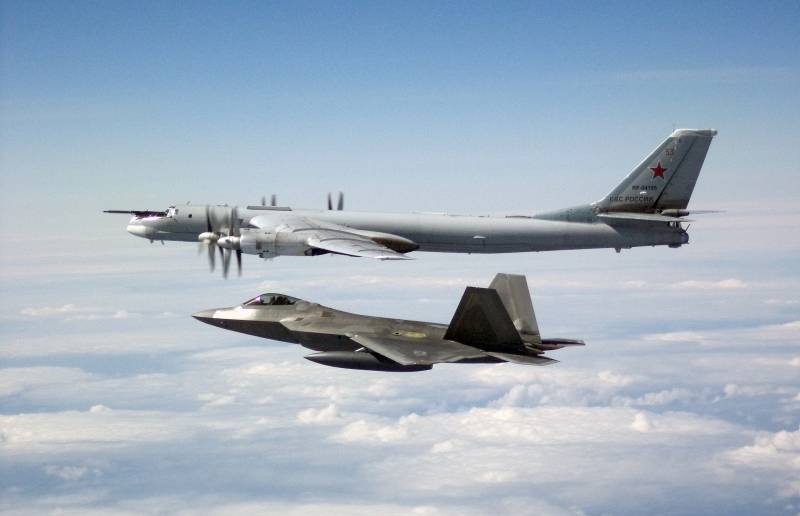 An American F-22 Raptor fighter is accompanying the Russian Tu-95 strategic bomber over the Bering Strait.

The Air Force is traditionally regarded as one of the most technologically advanced and effective types of armed forces. The military conflicts of recent years show that domination in the sky allows solving various tasks on the battlefield, ensuring the achievement of tactical, operational and strategic goals. An example of the successful use of the air force is the conflict in Syria. In this country, the Russian Aerospace Forces receive real combat experience, practice the tactics of using shock aviation on ground targets, are testing new types of weapons and, obviously, are engaged in reconnaissance work.

At the same time, Russia successfully coped with the task of deploying a remote aviation group and effectively used it, tipping the scales in the conflict to the side of the Moscow-backed official government of Syria in the person of Bashar al-Assad and the Syrian Arab Army. For Russia, this is the first such modern experience of the massive use of the Air Force in a military conflict. Prior to this, only the US Air Force carried out such operations at a distance from their borders. Today, Russia is gaining valuable combat experience in Syria, which was previously only possessed by the pilots of the US Armed Forces and NATO countries.

At the same time, in numerical terms, the US Air Force is undoubtedly superior to the Russian Air Force, remaining the strongest in the world, far ahead of its main competitors, including China, both in number and quality of military equipment. As an asymmetric response, Russia has traditionally successfully developed, manufactured and sold numerous air defense systems, which are recognized by many experts as the best in the world. In terms of the composition and quality of air defense systems, Russia has no competitors, while the air defense and missile defense system of Russia is deeply echeloned and represented by hundreds of large-range complexes (S-400, S-300), medium-range (Buk) and short-range (Tor "," Pantsir-C1 "). 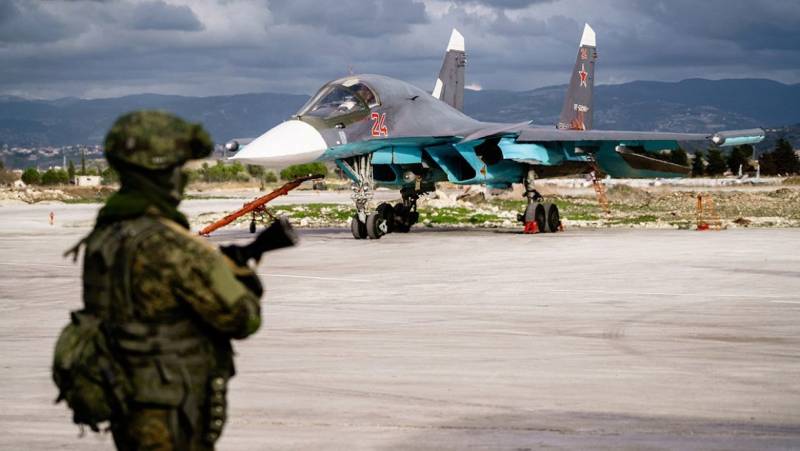 Su-34 of the Russian Air Force at an airbase in Syria. Photo: Ministry of Defense of the Russian Federation
In terms of the number of combat aircraft, the US Air Force is not so much superior to Russia (1522 versus 1183 aircraft). But there is a very important nuance here.

Military aircraft for various purposes, including direct combat aircraft, are also concentrated in the United States as part of the National Guard aviation, which, in fact, performs the role of the internal army, the US Navy and the Marine Corps. The total number of only combat aircraft that are at the disposal of the US Armed Forces, according to The Military Balance 2020 (data for Russia and the United States are used further exclusively for this collection), is 1522 in the Air Force + 981 aircraft in the naval aviation of the Navy + 432 aircraft in the Corps US Marine Corps + 576 aircraft in the Air National Guard.

A total of 3511 combat aircraft: fighters, bombers, attack aircraft and anti-submarine aircraft. At the disposal of the Russian Armed Forces, taking into account the air force and naval aviation of the Navy (+217 combat aircraft), there are 1400 vehicles.

In terms of the total number of combat aircraft, the US Armed Forces surpass the Russian Armed Forces by 2,5 times.

An even greater difference is observed when comparing transport aviation, AWACS aircraft and tanker aircraft.

In terms of the number of available tanker aircraft, the US Air Force surpasses all countries of the world dozens of times. This is due to the specifics of the use of US aviation around the world, the presence of a huge number of bases and power projection areas. In this respect, the Russian Air Force grouping has a pronounced defensive character, while the US Air Force is offensive.

The presence of numerous attack drones and large strategic drones is also an important advantage of the American military. The Russian Armed Forces currently lack serial attack UAVs and large reconnaissance drones that would be able to operate at a great distance from home airfields.

Organizational differences between the Russian and US Air Forces

Organizationally, the Russian Air Force is one of three types of troops in the Joint VKS (Military Space Forces of the Armed Forces of the Russian Federation), in addition to the Air Force, it is also the Air Defense and Missile Defense Forces and the Space Forces. In the United States, a similar system has been implemented with its own characteristics, in which the Air Force is also subordinate to certain types of troops, including the space forces and the Air Force Special Operations Command.

The main differences from the Russian Aerospace Forces are that the US Air Force is subordinate to the strategic missile forces (that is, all the country's ICBMs) and there are no air defense and missile defense units.

In addition, the US Air Force has a limited number of helicopters of all types. The main part of this equipment is directly subordinate to the ground forces and can be used in the interests of specific units and subdivisions of the ground forces. 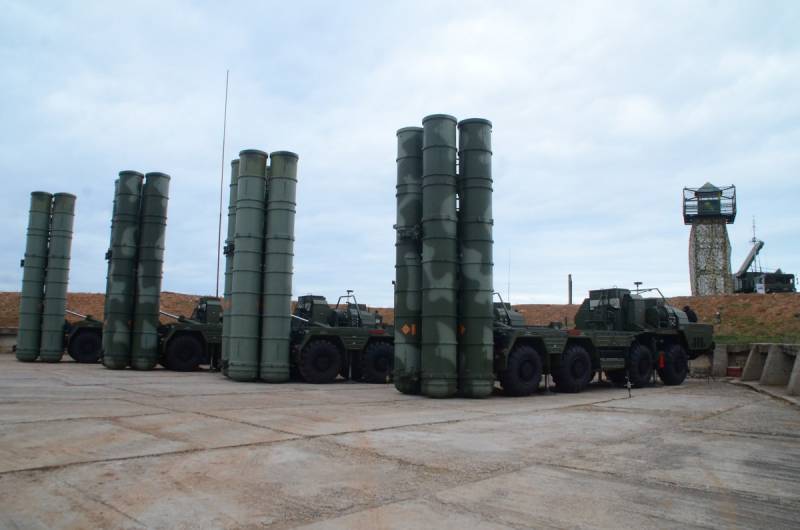 In service with the US Army, according to the annual bulletin "Military Balance" (The Military Balance 2020), which is compiled by the International Institute for Strategic Studies (IISS), there are 480 MIM-104D / E / F Patriot complexes equipped with various missiles.

The exact number of the S-400 complexes in service with the air defense and missile defense forces of Russia is unknown. But, apparently, the number of only these complexes already exceeds the presence of Patriot launchers in the US armed forces. According to Russian media reports, more than 60 divisions of such complexes are in service (usually each division has 8 launchers), while the procurement of the complexes continues.

Until 2023, the Russian Aerospace Forces should receive 3 regular regimental sets of S-400, as well as 4 sets of S-350 "Vityaz". RIA agency reported about it in June 2020 News... In addition to the S-400 systems, the air defense and missile defense forces include hundreds of S-300V / PS / PM-1 / PM-2 complexes in comparable quantities to the S-400 or in large numbers, plus numerous medium and short-range air defense systems.

The total strength of the US Air Force is 332 (excluding civil servants). In addition, the Air Force of the National Guard has 650 military personnel, in the naval aviation of the Navy - 106 people, in the aviation of the Marine Corps - 750 people.

The US Air Force is armed with 1522 combat aircraft. In order not to overload the text with numbers, we will confine ourselves to the analysis of the Air Force itself.

The total number of combat aircraft at the disposal of all US and Russian Armed Forces was given at the beginning of the article. It can only be noted that the F / A-18 Hornet fighter-bombers of various modifications, mainly in the F / A-18E and F / A-18F versions, still prevail in the composition of the US Marine Corps and Naval Aviation.

The rearmament of the US Navy with modern, stealthy, multi-functional fifth-generation F-35C Lightning II fighter-bombers (deck variant) is proceeding rather slowly. The fleet has no more than 28 such fighters. The US Marine Corps re-equips faster, with at least 80 F-35B Lightning IIs (short takeoff - vertical landing) at its disposal. 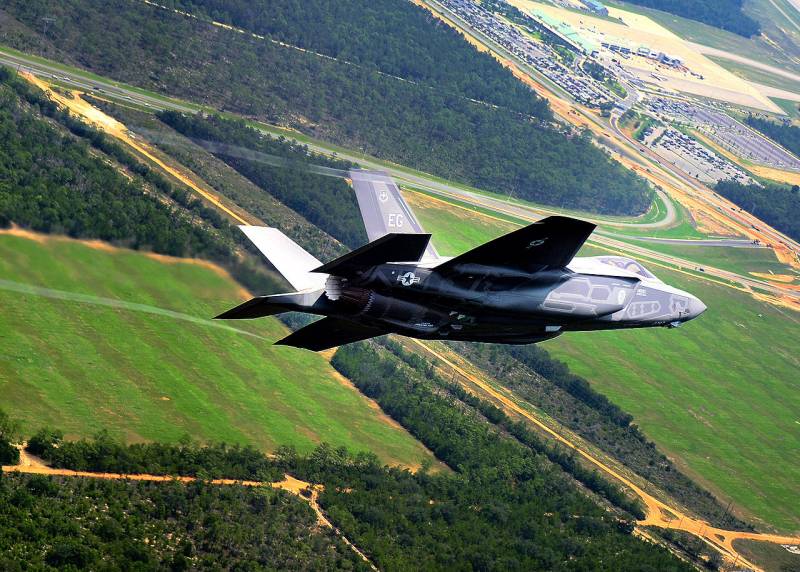 Fighter aircraft of the United States is represented by the stealthy fifth-generation F-22A Raptor aircraft - 166 aircraft, 95 F-15C Eagle fighters and 10 F-15D Eagle fighters. The largest number of combat aircraft are fighter-bombers, only 969 aircraft: 205 stealth fighter-bombers of the fifth generation F-35A Lightning II, 442 F-16C Fighting Falcon and 111 F-16D Fighting Falcon, as well as 211 F-15E Strike Eagle. Attack aircraft is represented by one type of aircraft - the A-10C Thunderbolt II; the American Air Force has 143 such aircraft.

A distinctive feature of the US Air Force is the presence of large attack drones and strategic reconnaissance UAVs. So, in the Air Force, there are 221 reconnaissance and strike drone MQ-9A Reaper (Reaper), as well as strategic reconnaissance UAVs, including 3 EQ-4B, 31 RQ-4B Global Hawk and approximately 10 RQ170 Sentinel and 7 RQ-180 (about the last two models have practically no information). It is only known that the RQ170 Sentinel is built according to the "flying wing" scheme and outwardly resembles the heavy attack UAV "Okhotnik" S-70, which is built according to a similar aerodynamic scheme, being developed in Russia. 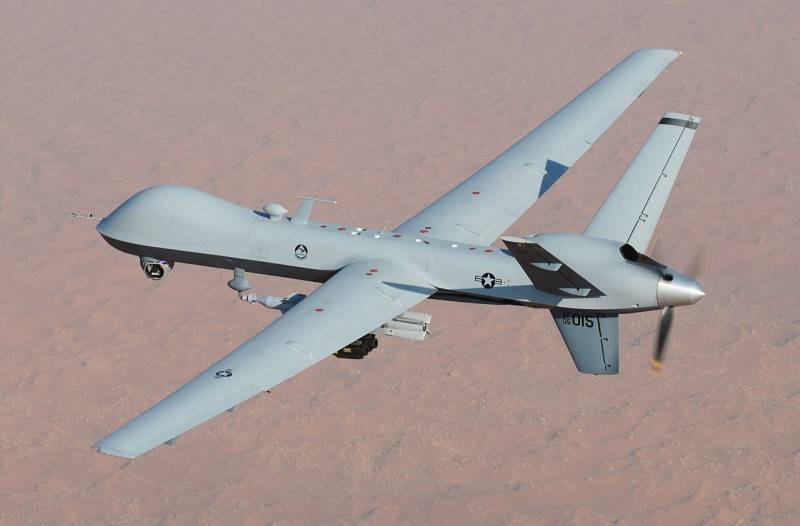 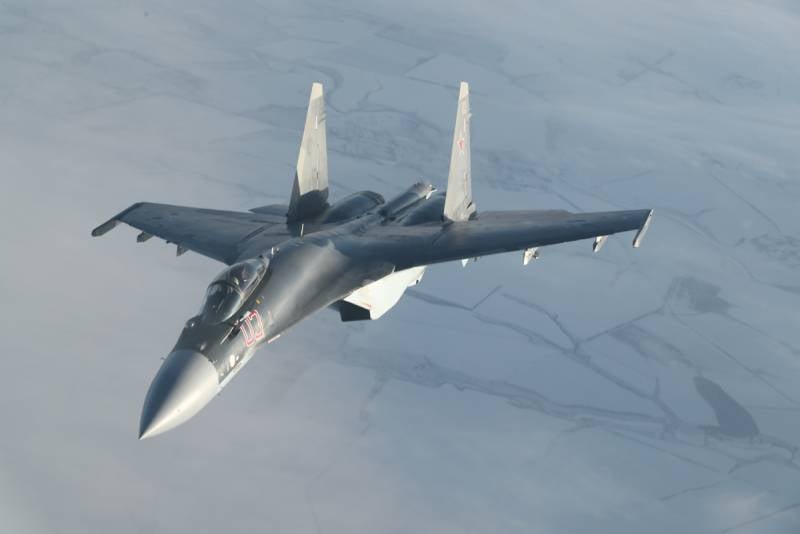 Fighter Su-35S Lipetsk Aviation Center. January 2018. Photo: Ministry of Defense of the Russian Federation
The Russian Air Force lacks fifth-generation fighters. At the same time, the development of such an aircraft, the Su-57, is ongoing in the country, and 10 flight prototypes have been built. The aircraft has not yet been officially adopted for service. The plans for the purchase of this aircraft have changed several times. If in mid-2018 there were announced plans to purchase only 12 fighters to arm one squadron, then on May 15, 2019, Russian President Vladimir Putin announced the purchase of 76 fifth-generation Su-57 fighters by the Ministry of Defense to arm three aviation regiments with the completion of delivery by 2028. 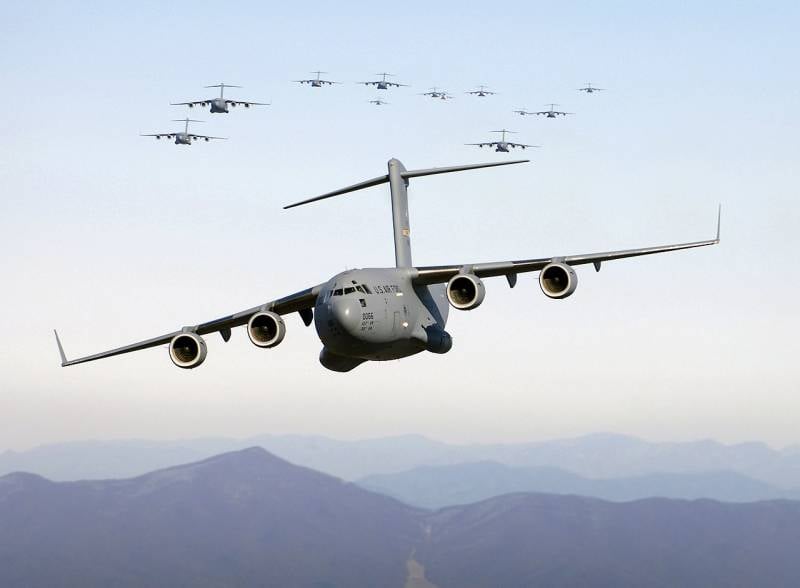 Heavy transport aircraft of the USAF C-17A Globemaster III
The greatest backlog of all the armed forces of the world from the United States is observed in the size of the fleet of tanker aircraft. The US Armed Forces have 555 tanker aircraft, of which 237 are directly in the Air Force (the main tanker is the KC-135R Stratotanker - 126 aircraft).

In Russia, the situation with refueling planes is very bad. The Air Force is in service with only 15 aircraft of this type: 5 Il-78 and 10 Il-78M.

The US Armed Forces in the number of tanker aircraft surpass all countries of the world by an order of magnitude. For example, China has an estimated 18 flying tankers, France - 17, Great Britain - 14.

The same lag is observed in the number of AEW & C aircraft. The US armed forces have an estimated 113 airborne radio detection and guidance systems.

At the same time, the number of such DLROiU aircraft in service with the Russian Air Force is estimated at 9 aircraft: 5 A-50 aircraft and 4 A-50U aircraft.