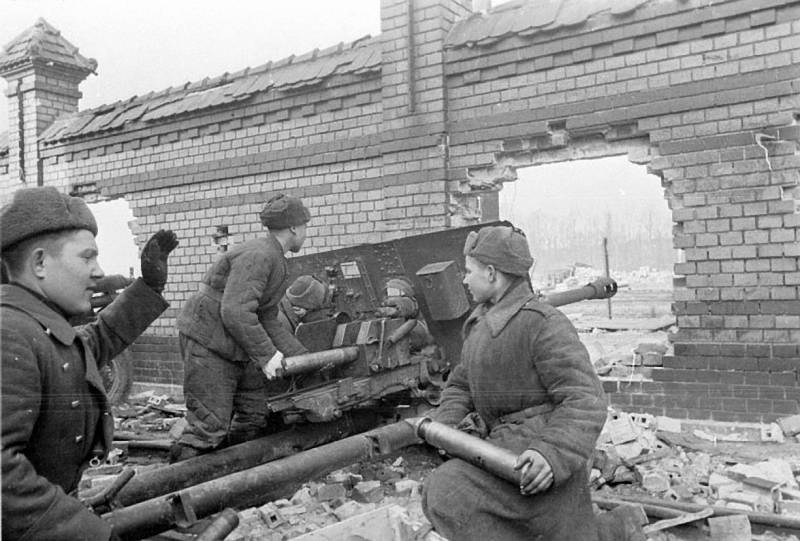 The picture does not quite correspond to the time of the narration in the article, but it was the developments of the NII-48 that became one of the foundations for the development of Soviet sub-caliber anti-tank ammunition in the future. In the photo: the artillery crew of the 76,2-mm divisional gun ZIS-3 of the 1942 model under the command of Sergeant Major Nurmukhamedov is fighting on the territory of Pomerania. The fighter in the foreground (apparently the loader's assistant) is holding a UBR-354P unitary cartridge with a 53-BR-350P projectile (a reel-type tracer armor-piercing projectile). Source: waralbum.ru

In the first months of the war in the hands of Soviet specialists were a captured sample of a 47-mm sub-caliber projectile of the then non-existent Polish army and a German memo on the use of cartridges with a 37-mm special armor-piercing projectile of the "40" model. It was not possible to get a real sample of the German subcaliber projectile, so the engineers had to use the translated manual. In it, in particular, German specialists wrote: 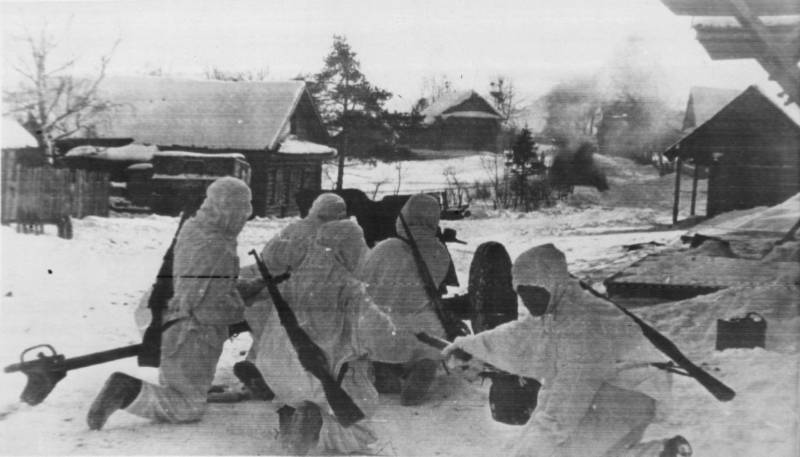 The calculation of the Soviet artillerymen fires from a 45-mm anti-tank gun model 1937 (53-K) in German tank on the street of the village. The crew number gives the loader a 45-mm sub-caliber projectile. Source: waralbum.ru
This thesis very clearly demonstrates the real advantage of sub-caliber shells, which some experts consider almost absolute. weapons against Soviet armored vehicles. Based on the data of the German training manual and the only captured 37-mm Polish shell, the Main Artillery Directorate of the Red Army proposed to develop its own analogues. At the end of August 1941, with this non-trivial task, they turned to NII-24 or, as it is better known, the Armored Institute.

For obvious reasons, the engineers were unable to restore the drawing of the 37-mm German sub-caliber projectile, but they were able to cope with the 47-mm Polish one. It turned out that the trophy sample of the sub-caliber projectile was an exact copy of the 47-mm similar projectile of the French company "Komissan". As a result, it was decided to develop domestic versions of armor-piercing sabot for 45-mm and 76-mm in full accordance with French patterns.

At NII-24, the topic of the development of domestic subcaliber projectiles received the number 5044 and the name “45-mm and 76-mm armor-piercing subcaliber projectiles similar to those of the French company“ Komissan ”. It should be noted that the engineers managed to create and test prototypes by September 1941. I would like to emphasize that the ammunition was developed and manufactured in an experimental batch in just a few weeks!

The 45 mm projectile received the internal code 2-1742. The ammunition weighed 850 grams, of which 270 grams fell on the carbide core. For the 76-mm sub-caliber projectile, the index 2-1741 was dispatched, and it, of course, had a greater mass of 3,65 kg, of which a little more than one and a half kilograms fell on the core. 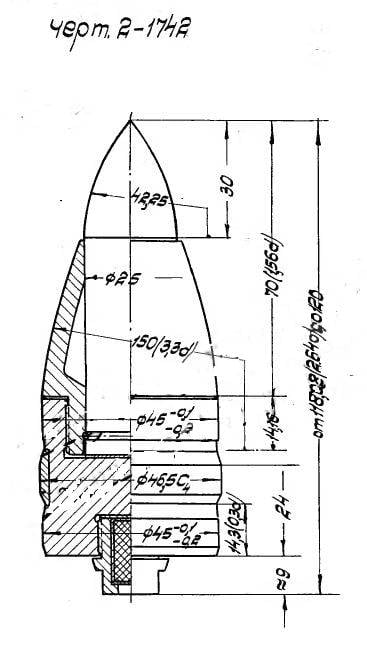 45-mm APCR projectile. Drawing 2-1742. Source: Report NII-48
The prototypes were made according to the drawings of the NII-24 in a pilot plant attached to the institute. A total of 40 sabot rounds, 20 of each caliber, were produced. As a core for 45-mm and 76-mm projectiles, a single tool alloy steel KHVG was used, which is an alloy of tungsten (1,49%), chromium (1%), sulfur (0,023%), phosphorus (0,011%), silicon (0,24%), manganese (0,24%) and carbon (0,97%). Everything else, naturally, was occupied by iron. The main alloying elements were chromium and tungsten. The sabot pan was made of st35 steel, and it was identical to the core material, with the exception of expensive chromium and tungsten. 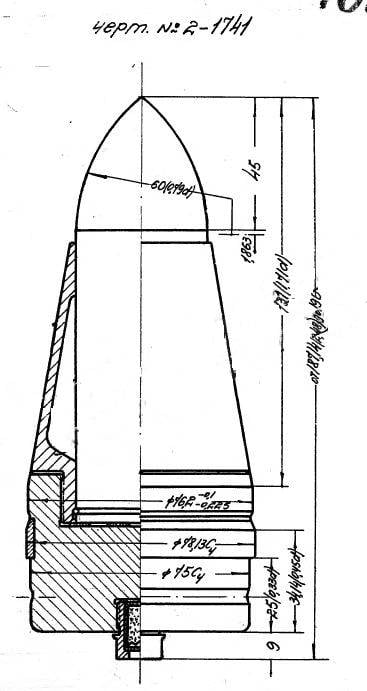 76,2-mm APCR projectile. Drawing 2-1741. Source: Report NII-48
Briefly about the heat treatment of the core material of armor-piercing shells. In many ways, it was this process that determined the mechanical properties of steel. In accordance with the technology, the core workpiece was first hardened. Heat treatment technologies for 45 mm and 76 mm differed slightly. Initially, the products were heated to 600 degrees, then heated to 830 degrees for 50 minutes (the core of the 76-mm projectile was heated for 1 hour) and, finally, kept at a maximum temperature for 10-15 minutes. There were significant differences in the cooling procedure. The smaller billet was cooled in kerosene, and the larger one in water at a temperature of 45 degrees.

After hardening the core, tempering followed. The items were again heated to 220-230 degrees, held for an hour and a half, and slowly cooled in air.

Fire tests of subcaliber shells samples took place on September 6-7, 1941 at the Sofrinsky test site and turned out to be discouraging. The assignment to the testers was as follows:

According to the test program, it was necessary to determine the armor penetration of projectiles up to 300 meters and at the same time select normal charges by pressure with the determination of the initial speed and speed drop at a distance of 300 meters. 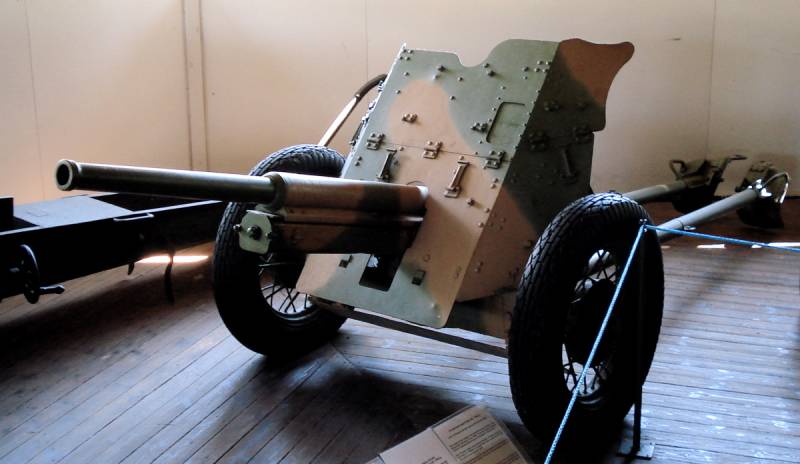 45-mm anti-tank gun model 1932, used to test prototype shells. Source: ru.wikipedia.org
The conclusions on the fire tests were disappointing. 45-mm APCR shells from a distance of 100-200 meters could not penetrate the 50-mm armor plate in four cases out of eleven. The testers recorded only one conditioned penetrating defeat and as many as six blinds. At the same time, the initial speed of the ammunition approached 950 m / s. The testers noted that firing 45-mm projectiles was accompanied by large dispersion, the cause of which was the unstable flight of the ammunition due to cutting off the belt or turning the core. A conventional armor-piercing or, as it was called, a 45-mm projectile of the "standard design" could not hit the same armor.

Subcaliber 76-mm shells were used to hit the armor plates from two guns. The short-barreled regimental gun, as expected, was unable to disperse the armor-piercing projectile to speeds above 535 m / s, which negatively affected the efficiency. Nevertheless, the 50-mm homogeneous armor was pierced by the experienced projectile, in contrast to the standard ammunition of a similar caliber. For a 50-mm cemented armor plate, out of three hits, only one was counted as conditional. Against a 60-mm cemented slab, the new sub-caliber projectile was powerless.

The divisional gun model 1902/30, due to the long barrel, reported the anti-tank projectile a much higher muzzle velocity - 950 m / s. The shell was not even tested on 50-mm cemented armor, obviously, there was an understanding of its excess power. They fired ten times at 60-mm cemented, of which nine were not counted, and only one shell pierced the target through and through. Against thicker 70 mm armor, 2 substandard defeats were recorded. In all test episodes, the shelling was carried out from 100-200 meters. 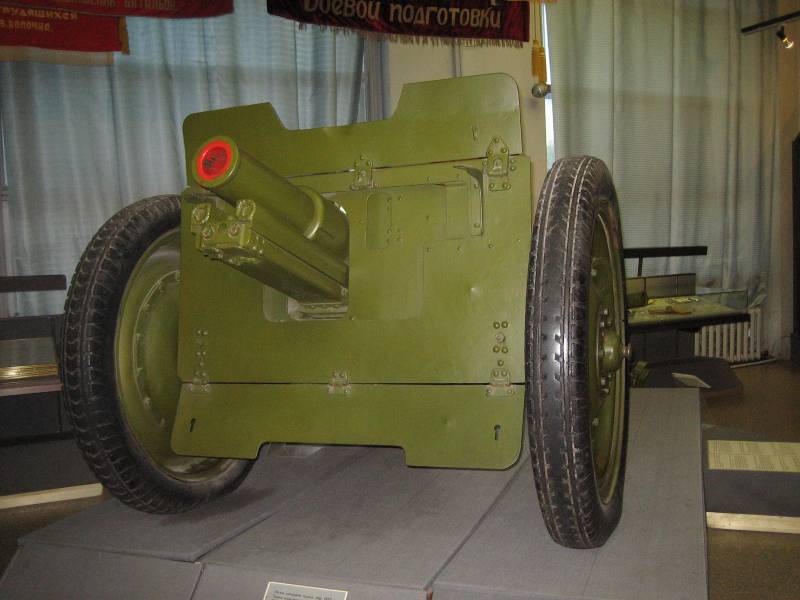 76-mm regimental gun model 1927, used in tests. Not the best example for fighting tanks. Source: ru.wikipedia.org
Now let's move on to the conclusions of the main developer of the NII-24 shells. The engineers decided that projectiles of this design did not show advantages over standard armor-piercing ammunition. Moreover, according to NII-24: "Further work in general on sub-caliber projectiles in the case of the manufacture of a core (active projectile) from instrumental or structural steel with a specific gravity of about 7,84 should be stopped." This is how the defense industry of the USSR almost lost the most progressive anti-tank type of projectile! NII-24 engineers stated in the report that they came to this conclusion, not only testing their own shells, but also examining captured samples. The German core contained up to 75% tungsten, had a specific gravity of 16,5 and a Rockwell hardness of about 70 units, but it could not impress domestic gunsmiths either. True, in a top secret report, the engineers did not reveal what exactly German ammunition did not please them.

The specter of hope for the further development of domestic subcaliber projectiles gives the last point in the conclusion of NII-24:

Work on the final clarification of the feasibility of using sub-caliber armor-piercing projectiles should be carried out in the case when the issue of producing a sufficient amount of hard alloys for the needs of the shell industry is positively resolved and the problem of the possibility of machining hard alloy cores for such shells in mass production is solved.

For March 1942, when the report was signed, a deadly wish, to put it bluntly. It was with difficulty that it was possible to organize production at the evacuated enterprises, and here the requirement to master the mass processing of tungsten alloys.

76-mm divisional gun model 1902/30. Source: ru.wikipedia.org
The Artillery Committee of the Main Artillery Directorate read the report with interest, and one of the military engineers wrote by hand on the title page:

The report does not indicate the resistance coefficients of the slabs used for testing. The speeds at which the tests were carried out are confused, and it is not clear what thickness of armor they correspond to. These data will be updated at NII-24. The conclusion of NII-24 is correct in terms of evaluating the results and in terms of using a core with a specific gravity of 7-8 in this design and incorrect in terms of refusing to search for new, more advanced designs of sub-caliber projectiles, which make it possible to replace the "heavy" core with its design. Take note of the report.

Perhaps it was this military expert, whose signature cannot be made out, that saved the domestic armor-piercing sub-caliber shells.