Comparison of the US and Russian armies in 2020. Ground troops 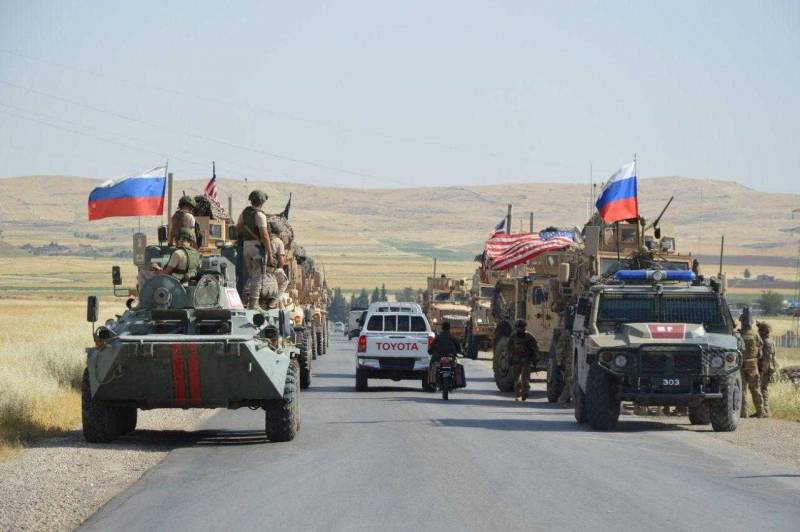 Interest in comparing the capabilities of the US and Russian armed forces continues to this day. This topic will always remain relevant, given the existing geopolitical contradictions between the two states. The simultaneous presence of Russian and US servicemen in Syria, where they sometimes come face to face, only fuels interest in this topic. In addition, in recent years, in response to the strengthening of Russia's military capabilities and the intensification of the actions of the Russian armed forces in the post-Soviet space, NATO has increased its military presence in the Baltic countries, where units of the American armored brigade are currently based on a rotational basis.

In recent years, the combat capabilities of the armies of the two countries have significantly expanded. The Russian Armed Forces have significantly updated the material and technical park, surface fleet, air force and army AviationHaving received new helicopters en masse, the country's air defense fleet was also seriously updated, which was replenished with dozens of S-400 air defense divisions. The US Armed Forces continued to increase their air superiority, receiving more and more fifth-generation F-35 fighters of various modifications, as well as new drones for various purposes.

The backbone of the two armies is still mechanized units with a large number of armored vehicles, vehicles and self-propelled artillery. At the same time, the armies of the United States and Russia are rightly considered one of the most belligerent, a sufficient number of military personnel have real combat experience. In Russia, such experience in the fullest extent was received by the Aerospace Forces and the fighters of the recently created Special Operations Forces. At the same time, the armies of the two states today have experience not only of counter-guerrilla warfare and battles with illegal armed groups in Afghanistan and Syria, but also the experience of more traditional wars against regular armies in Iraq and Georgia. In this regard, they are superior to the Chinese army, which in recent decades has not had real combat experience. 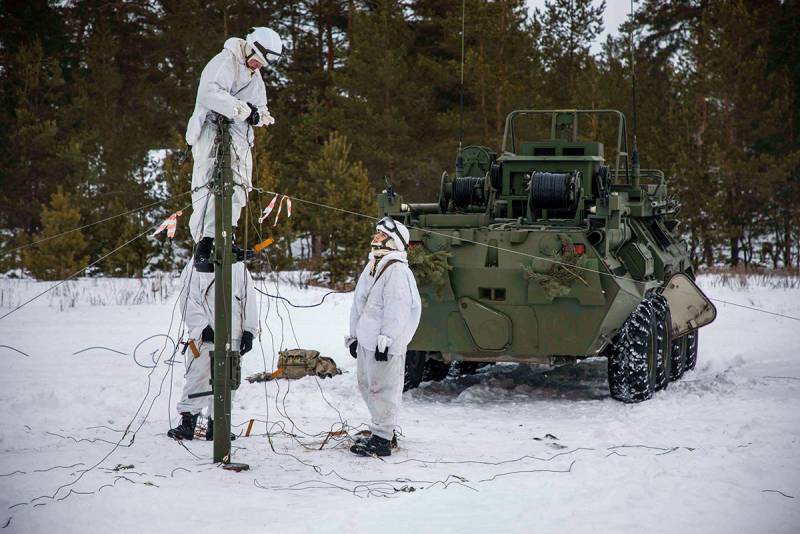 Signalers in the field. Photo: Russian Ministry of Defense
When thinking of the US and Russian armies, often the first thing that comes to mind is nuclear weapon... The two countries have the most powerful nuclear arsenals, but it is clear that any war using them for our civilization is likely to be the last major military conflict in stories... Therefore, we will not even consider this component and will immediately move on to other types and types of troops, starting with the ground forces of the two countries. For a comparative analysis of the armed forces, we will use data from the annual bulletin "Military Balance", which is compiled by the International Institute for Strategic Studies (IISS). Using the materials of this collection will allow bringing the data for the two countries to a single denominator.

Personnel of the ground forces of the United States and Russia

In terms of the total number of military personnel, the US Armed Forces are ahead of Russia, the same applies to the mobilization potential of the two states. The population of the United States is trite 2,23 times the population of Russia. According to the data for 2020, 1 servicemen (excluding the National Guard) serve in the US armed forces, and about 379 servicemen in Russia. The US Army, which is the country's ground forces, has 800 men, and the Russian ground forces 900. In addition, about 481 troops are serving in the US National Guard. The number of Russian paramilitary formations, which primarily include the troops of the National Guard, is estimated by the compilers of The Military Balance at 750 thousand people.

Also, the tasks of the ground forces on the battlefield can and has been successfully solved over the past decades by the US Marine Corps, in which 186 servicemen are serving. If necessary, the United States can deploy up to 300 thousand active servicemen of the Army and Marine Corps in various theaters of operations, transferring the tasks of the country's defense to units of the National Guard and reservists. In Russia, taking into account the Airborne Forces units, which in modern Russian realities play the role of elite infantry, up to 668 thousand servicemen can be deployed in a land theater of operations, and taking into account the marines from the Navy, the number of fighters can be brought to about 325 thousand people (360 thousand - ground forces, 280 thousand - airborne forces, 45 thousand - marines). In order not to overload the text, which is already rich in numbers, we will not compare the composition of the weapons of the US Marine Corps, the Airborne Forces and the Russian Marine Corps, limiting ourselves directly to the topic of the article - the ground forces.

Main battle tanks of Russia and the USA

The main striking force of the ground forces remains Tanks... The American army is armed with 2389 main battle tanks Abrams. Of these, 750 vehicles in the M1A1 SA version, 1605 in the M1A2 SEPv2 version and 34 vehicles in the M1A2C version, which are currently undergoing test operation. The Russian ground forces are armed with 2800 tanks. Of these, 650 vehicles in the T-72B / BA versions, 850 in the T-72B3 version, 500 T-72B3 tanks of the 2016 modification, 330 T-80BV / U tanks, 120 T-80BVM tanks, 350 T-90 / 90A. Paradoxically, the T-72 tanks remain the most modern combat vehicles in the Russian army. The T-72B3 version, which was modernized in 2016, received a new weapon, a 1000 hp engine. with., improved protection, including through the use of dynamic protection "Contact-5", an automatic transmission, a television rear-view camera and other improvements. As in the United States, the Russian army is still massively using the backlog inherited from the Cold War, modernizing it and bringing it to a state adequate to today's realities. In terms of the number of main battle tanks, the countries are practically equal, especially without taking into account the T-72B / BA tanks still remaining in combat units. 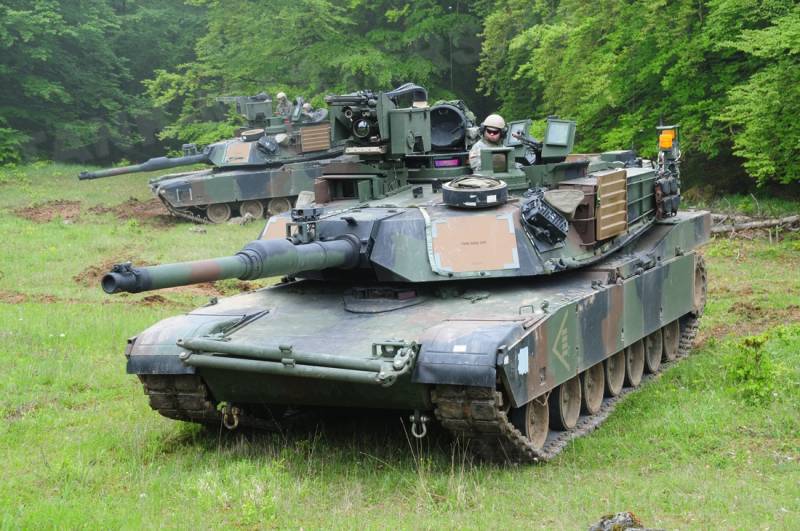 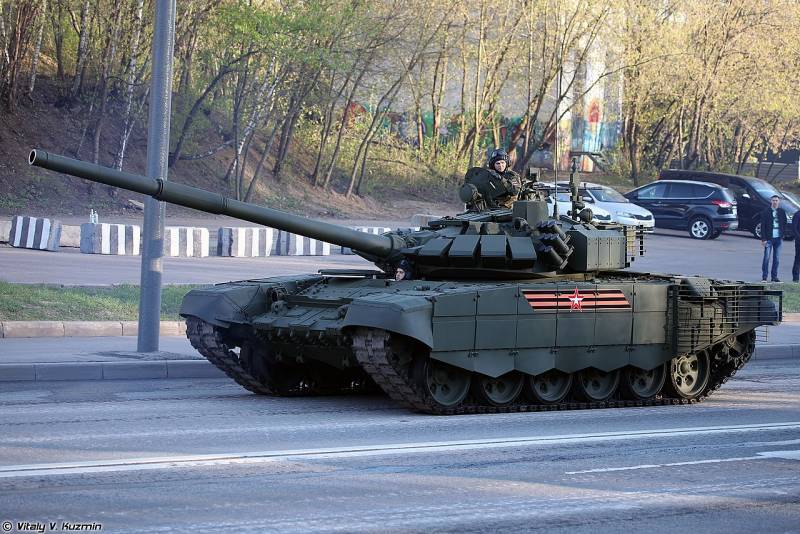 T-72B3 modernized. Photo: Vitaly V. Kuzmin
At the same time, both armies have a large number of tanks in storage. In the USA, this is about 3300 M1A1 / A2 Abrams, in Russia - more than 10 thousand tanks, of which about 7 thousand are various versions of the T-72. At the same time, the Russian army may very soon receive a fundamentally new main battle tank belonging to the next generation. Although the T-14 tank on the Armata platform has not yet been officially adopted for service, it is much closer to mass production (first presented to the public in 2015) than the new generation American MBT, the development process of which in the United States is just beginning.

The same picture as with tanks is characteristic of wheeled and tracked armored combat vehicles of the ground forces. Both countries are using the legacy of the Cold War to modernize it. The main infantry fighting vehicle of the American army is still the Bradley, and the Russian one is numerous BMP-1, BMP-2 and BMP-3, while Russia is actively developing a new tracked BMP on the Kurganets-25 platform. The main armored personnel carrier of the Russian army remains the BTR-80 and its modernization - the BTR-82A / AM vehicles. In this regard, the US Army looks preferable, since it received numerous wheeled "Strykers", which have a much higher level of protection for the crew and the landing force. Armored personnel carriers on the Boomerang wheeled platform should become similar in terms of the capabilities of the armored personnel carrier for the Russian army, the test completion date of which was shifted to 2021. 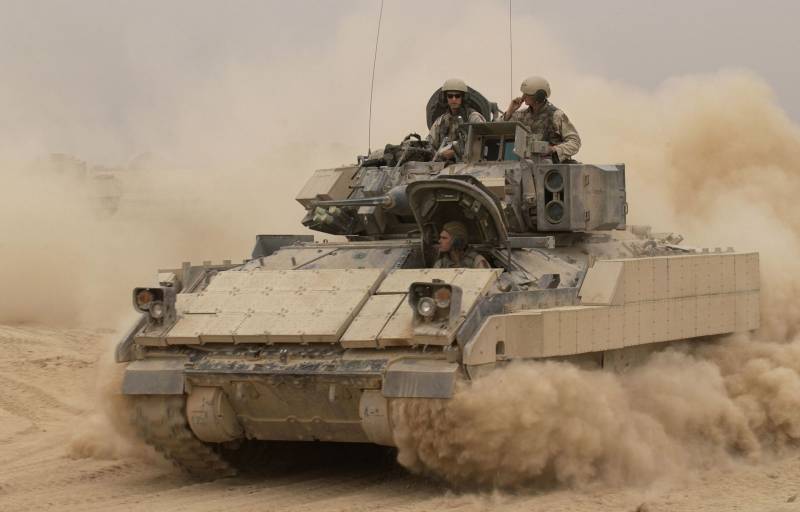 M2A2 Bradley
The total number of infantry fighting vehicles and reconnaissance vehicles on the Bradley base in service with the American army is estimated at about 3700 units (1200 M3A2 / A3 reconnaissance combat vehicles, 2500 M2A2 / A3 BMPs). At the same time, the total number of infantry fighting vehicles and reconnaissance combat vehicles of all types is estimated at almost 4700 units. Also, the US Army has approximately 10 armored personnel carriers, of which approximately 500 are still tracked M5A113 / A2, as well as 3 wheeled Strykers of various modifications. The Russian army is armed with about 2613 BMPs, including 4060 BMP-500, about 1 BMP-3000, 2 BMP-540 and more than 3 BMP-20M. The number of armored personnel carriers is estimated at 3 vehicles, including 3700 BTR-100A, 80 BTR-1000A / 82AM, in addition there are about 82 BTR-800 of all variants, 60 BTR-200 and 70 BTR-1500. Also in service are about 80 tracked lightly armored MTLB transporters, which, if desired, can be used as an armored personnel carrier. 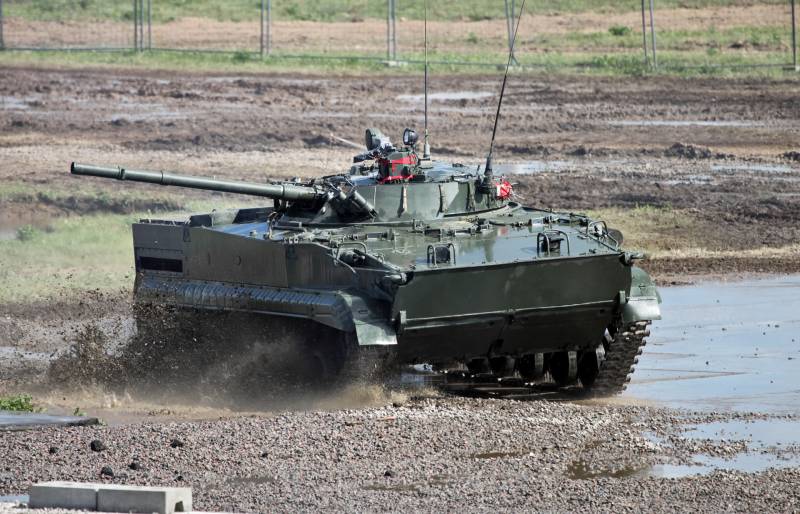 Artillery of the ground forces of Russia and the USA

Despite the changing landscape of wars, artillery is still the God of War. Thanks to the use of guided munitions, new guidance and reconnaissance systems, including with the help of UAVs, the capabilities of artillery are approaching those of high-precision weapons. In service with the US Army in 2020, there are more than 5400 artillery systems, of which a thousand are 155-mm self-propelled guns: 900 M109A6 and 98 M109A7. Also in the US Army there are 1339 towed artillery pieces: 821 105 mm M119A2 / 3 howitzers and 518 155 mm M777A2 howitzers. There are only 600 MLRS units, including 375 M142 HIMARS and 225 M270A1 MLRS, these installations, when placing the appropriate launch containers and equipment, can also be used as operational-tactical missile systems. Also, the ground forces have about 2500 81 and 120 mm mortars. 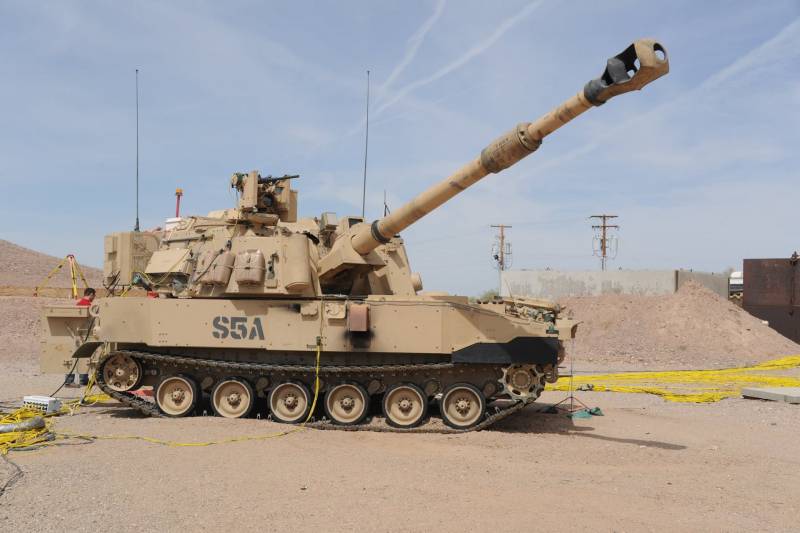 155 mm SPG M109A7.
In terms of artillery, the ground forces of Russia look much more diverse, this can hardly be attributed to the advantages (problems with logistics, maintenance and operation of a motley fleet of equipment). In quantitative terms, Russia is losing to the United States in artillery, but only at the expense of mortars. At the same time, the Russian ground forces have superiority in MLRS, mainly due to the large number of 122-mm MLRS BM-21 Grad / Tornado-G, as well as in self-propelled guns. And in terms of the number of various artillery systems in storage, Russia significantly surpasses the United States. In our country, there are almost 12,5 thousand various towed artillery systems in warehouses, in addition to this, there are about 4300 self-propelled guns in storage, half of which are 122-mm 2S1 "Carnation" and more than 3 thousand MLRS. American stocks are much more modest and are represented by about 500 155-mm M109A6 self-propelled guns, there is no information on other artillery systems in storage. 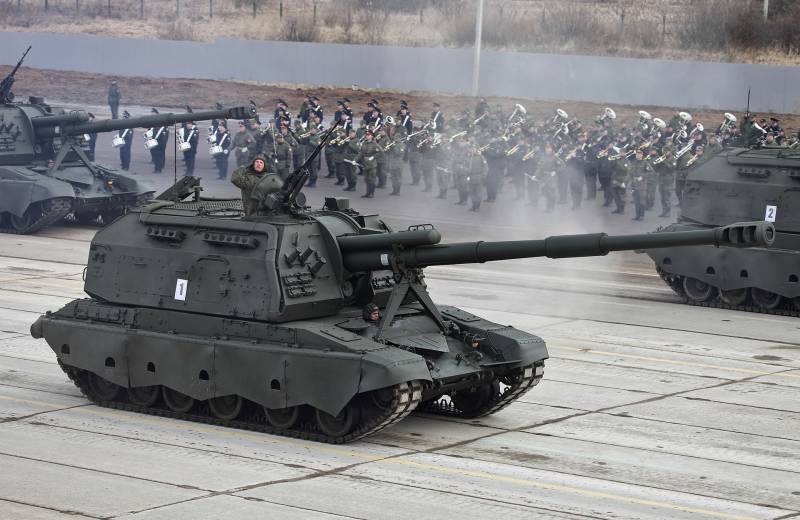 152 mm ACS 2S19M2 Msta-SM. Photo: Vitaly V. Kuzmin
The most long-range instrument of the Russian ground forces is the Iskander operational-tactical missile systems, which especially frighten our overseas partners. Officially, the firing range of these complexes is limited to 500 km. According to the annual publication The Military Balance, the Russian army is armed with 140 OTRK 9K720 Iskander-M complexes. It is the most formidable weapon of the Russian ground forces, capable of striking targets deep in enemy defenses.

In summary, it can be noted that the US ground forces are superior to the Russian ground forces in terms of the number of personnel and the number and variety of armored combat equipment. The distinguishing features of the ground forces of the two countries include the more developed air defense systems of the Russian ground forces. First of all, due to the numerous Buk-M1-2, Buk-M2 and Buk-M3 systems in service. At the same time, the United States has an overwhelming superiority in MRAP. The American infantry, when moving in a combat zone, is better protected precisely due to the massive use of such military equipment. Another important distinctive feature is the presence of a powerful helicopter component in the US Army (more than 700 attack and about 3 thousand transport helicopters), while in Russia attack and transport helicopters are subordinate to the Aerospace Forces (almost 800 helicopters, of which more than 390 are attack helicopters).

Ctrl Enter
Noticed oshЫbku Highlight text and press. Ctrl + Enter
We are
What war do we need to prepare for?Pentagon Cybermen
Military Reviewin Yandex News
Military Reviewin Google News
183 comments
Information
Dear reader, to leave comments on the publication, you must sign in.