The problem of reducing the weight of magazines is especially acute for machine guns designed for intensive firing. The large weight of the drum magazines forces the machine gunner's wearable ammunition to be limited or to place the cartridges in separate belts, spending additional time in battle on laying the belts in nylon bags or metal boxes. 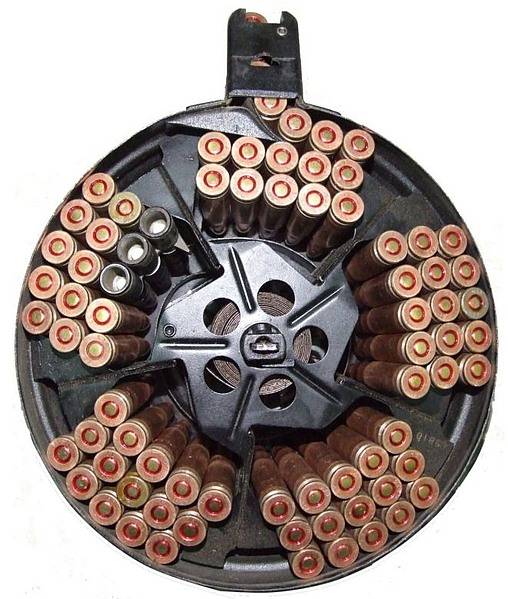 The most common drum magazines have a capacity of 75 to 100 cartridges, which are located in a single row of cartridges formed by spiral punching on radial surfaces. The classic drum magazine consists of a body, a cover, a sector feeder and a torsion coil spring. In the neck of the magazine, instead of one of the jaws, a cartridge holder is installed, which provides vertical insertion of cartridges into the magazine and quick discharge of the magazine from cartridges. There is also a spring crank and connectors. The total number of assembly units of the drum magazine reaches two dozen.

Known paired designs of drum magazines with increased capacity with the rebuilding of cartridges from two streams into one. However, they have reduced reliability due to the complex kinematics of the movement of the cartridges and the doubled number of parts susceptible to damage and contamination.

In addition, there are simplified drum magazine designs consisting of an arc-bent double-row box magazine with a coil compression spring of the MWG 90-cartridge magazine type.

Until recently, the main structural material of drum magazines was steel, after mastering the production of engineering plastics, glass-filled polyamide and transparent polycarbonate began to be used. Polymer materials allow one and a half times to reduce the weight of the magazine per cartridge (up to 7 g for a 100-cartridge Ultimax), while ensuring visual control of cartridge consumption. However, even the most advanced drum magazine models still have a higher weight per cartridge than a nylon bag with plastic strap. The complexity of the design increases the cost and reduces the reliability of drum magazines compared to belt-fed machine guns.

In connection with the above, a new type of store (in two modifications) is proposed, having a weight (per cartridge) less than the specific gravity of a nylon bag with a plastic tape of equal capacity. A torus, a geometric body with a through axial hole, is used as a form factor for the new store. It is proposed to use modern plastics as the material for the store body - opaque polyphenylene sulfide and transparent polyarylate.

Polyphenylene sulfide is an engineering plastic with a specific gravity of 1,6 g / cm60. The operating temperature is in the range from -250 to +1 ° C. The low viscosity of the polyphenylene sulfide melt makes it possible to manufacture cast products with a wall thickness of 100 mm. Filling the plastic with carbon microfibers (1x40 microns) with a mass fraction of 0,5% and an elastomer - polydimethylsiloxane with a mass fraction of 210% makes it possible to increase its tensile strength up to 68 MPa and impact strength up to XNUMX kJ / mXNUMX.

Polyarylate is used for the manufacture of headlight diffusers for cars. Its specific gravity is 1,2 g / cc. The working temperature of the plastic is in the range from -60 to +200 ° C. In order to ensure the impact resistance of the polyarylate, an additive of 0,5% titanium dioxide is added to it, which increases the impact strength of the plastic to 100 kJ / m150. The wear resistance of polyarylate products is ensured by a coating (made of polyarylate varnish with ceramic nanoparticles), which forms a chemical bond with the part material. The strength of the polyarylate at the level of 1 MPa is ensured by filling it with single-walled carbon nanotubes with a mass fraction of XNUMX%.

Non-collapsible version of the toroid store

The simplest version of the proposed store is its non-separable modification, consisting of only two assembly units - a toroidal body with a side neck and a prismatic helical compression spring with a roller feeder. 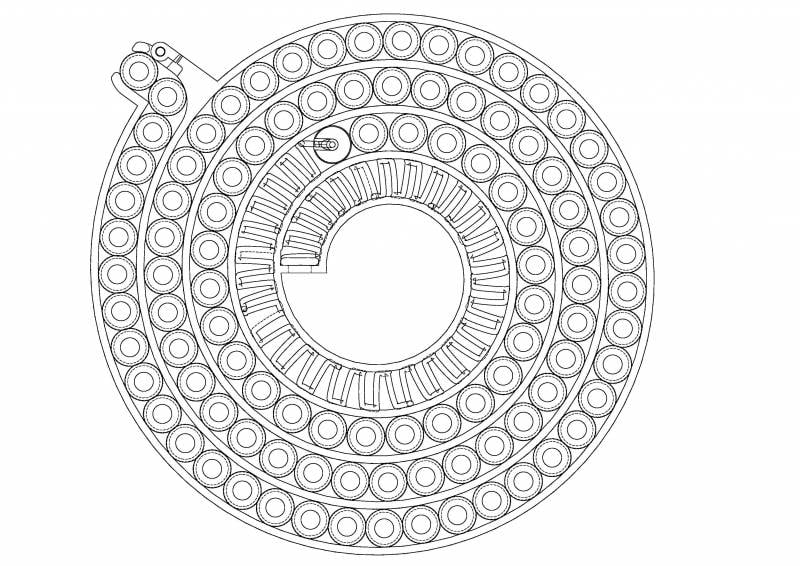 The body is made in one piece with an internal spiral baffle forming a single-row stream of cartridges. The partition mates with the body along the radii of the circular arcs and serves as a stiffener. On its surface there are longitudinal projections for contact with the base and shoulder of the bottle cartridge cases. In the case of using telescopic cartridges, there are no protrusions, the cartridges are in direct contact with the bases of the partition. The spring is connected to the roller feeder by passing its last turn through the axial hole in the feeder with subsequent clamp connection of its free end to the penultimate coil of the spring. A rocker lock with a leaf spring is installed in the neck.

The helical spring is inserted into the neck when the lock is released. The coil spring is cocked by inserting cartridges into the magazine. The body is cleaned with the spring removed using water, an aqueous solution of a cleaning agent, gasoline or aviation kerosene.

The material of the body and the feeder is polyphenylene sulfide, the material of the springs and the retainer is steel. The technology for manufacturing the body includes casting a plaster model, molding plastic under pressure into a mold, destroying the model on a vibration stand with pneumatic removal of gypsum dust. The coil spring is produced by hardening on a spiral bent mandrel.

Collapsible version of the toroidal store

A more complex design of a toroidal magazine is its collapsible modification, which consists of a body open from one of the ends with a side neck and a hollow axis, a plug-in cover with a hollow axis, and a tape spiral torsion spring equipped with a roller feeder and a locking bar. A rocker lock with a leaf spring is installed in the side neck. 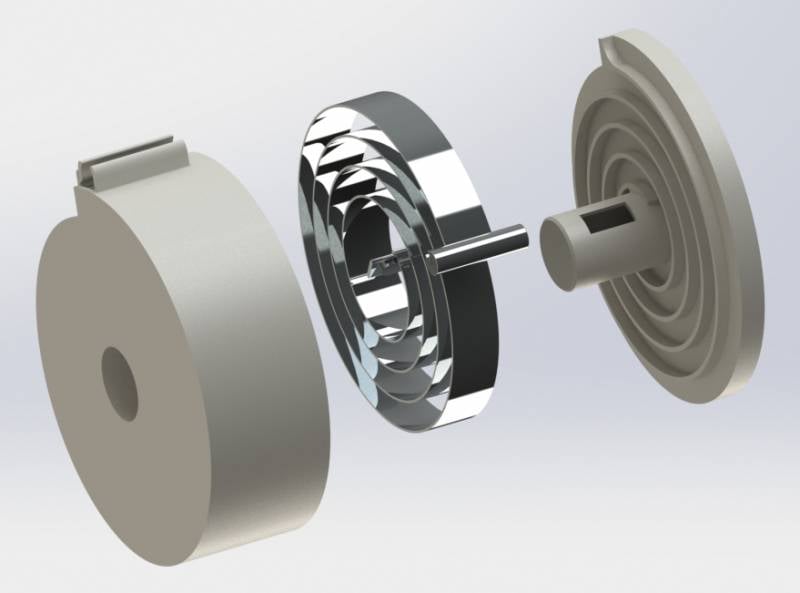 The feed roller and stop bar are riveted to the folded ends of the coil spring. When the cover is inserted into the body, the locking bar enters the cutouts of the body and cover axes, connecting these parts of the structure into a common assembly. Disassembly of the structure is carried out by pressing the lock bar when the spring is in a deflated state.

The body material is polyarylate, the material of the feeder, bar, springs and retainer is steel. The body and cover are manufactured by standard injection molding. For the purpose of sequential unwinding of the coils, the spring plate has a thickness variable along its length by rolling between rolls of variable radius.

The small number of assembly units of the toroidal store will greatly simplify its military operation. The weight of a toroidal magazine, almost equal to the weight of a steel belt with a loose link (or half the weight of a nylon bag with a plastic belt), will allow an infantryman's portable ammunition to have only loaded magazines.