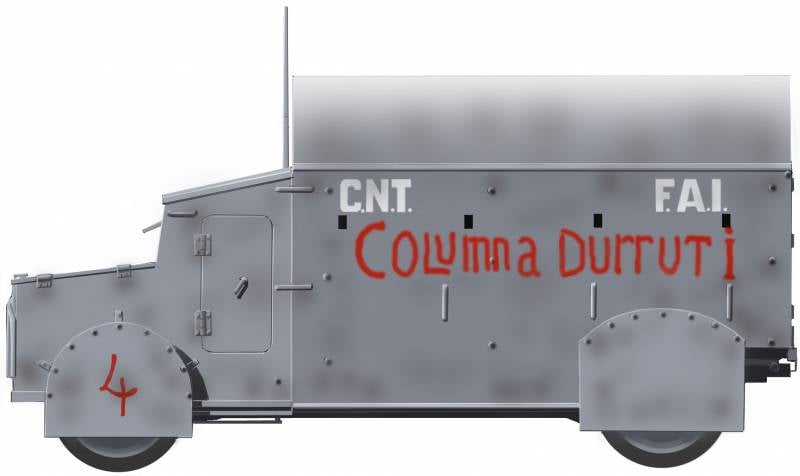 The armored car "tiznaos", so to speak - "a barn on wheels." Apparently, it was built in Barcelona and belonged to the anarchists of Durruti

On the third day of our stay in Alcubierra, rifles arrived. A senior sergeant with a gruff, dark yellow face gave us weapon in the stable. I was desperate to see what had befallen me. It was a German "Mauser" model of 1896, that is, more than forty years ago. The rifle was rusted, the bolt moved with difficulty, the wooden lining of the barrel was split, one glance into the barrel convinced me that it was hopelessly rusted too. Most of the rifles were no better, and some were even worse than mine. No one even thought that better rifles should be given to those who know how to handle them. The best rifle, made just ten years ago, was in the possession of a fifteen-year-old cretin nicknamed maricón ("girl"). The sergeant set aside five minutes for training, explaining how to load the rifle and how to disassemble the bolt. Many of the militias had never held a rifle in their hands before, and very few knew why a front sight was needed. Fifty cartridges were distributed per person. Then we were lined up, and we, throwing our backpacks behind our backs, moved towards the front, which was only five kilometers from us.
(George Orwell "In Memory of Catalonia")

Behind the pages of the civil wars. Perhaps no one better than George Orwell spoke about his personal participation in the Spanish Civil War. However, he either did not see, or did not consider it necessary to tell about the "tiznaos" - homemade republican armored cars. Although it would be very interesting to read his description - Orwell had a keen eye and was attentive to little things: that is, he possessed qualities that are especially necessary for any journalist. And this can only be regretted, because these machines were included in a very special chapter. stories Spanish armored vehicles, first of all, because they were used there, well, just a great many. During the war, in almost every city or even a small village in Spain, they tried to build a certain number of homemade armored vehicles, sometimes of the most exotic type. Even the Spanish historians were beyond the power of Spanish historians to somehow describe all of them, and even more so to systematize, so our today's time cannot be called exhaustive, but this is the maximum that the same Spanish sources give us. There are many photographs of "tiznaos", but today we will not use them, but will replace them with very high-quality illustrations made by A. Sheps. So… 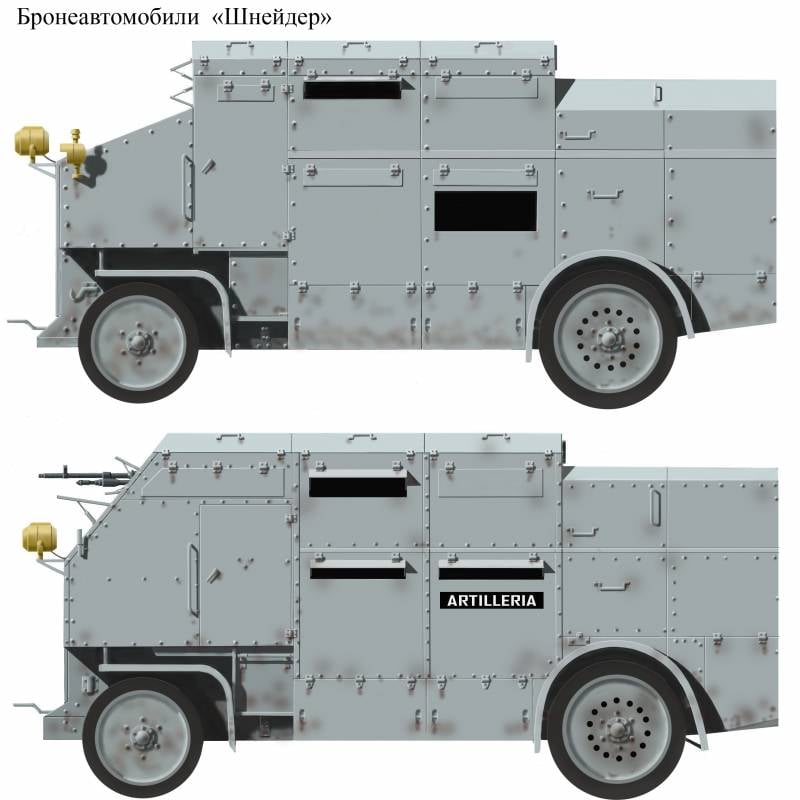 The first Spanish armored cars, delivered from France and had pivot machine-gun mounts, which made it possible to fire from different embrasures
With the beginning of the war, workers in the least equipped Spanish factories and small factories began to "rivet" extremely primitive armored vehicles, often armored with conventional "boiler iron", without towers, with embrasures cut along the sides for firing from personal weapons of the armored car crew. 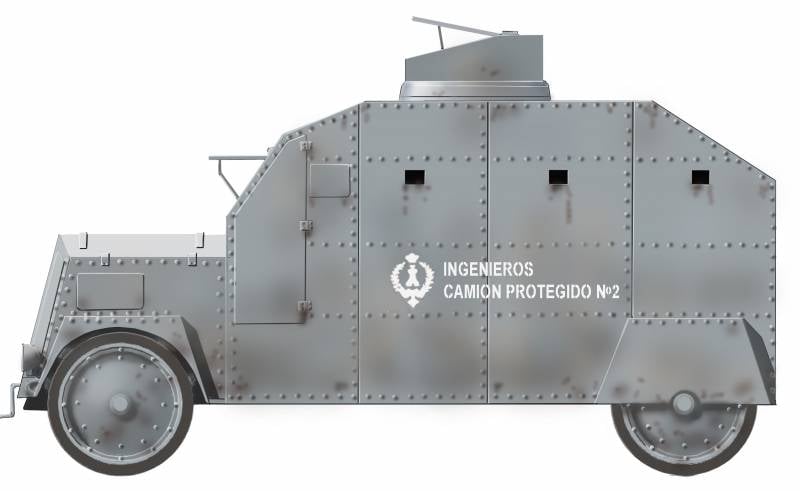 BA "Nash Quad" were supplied to Spain in the 20s and fought in Spanish Morocco
At large factories and shipyards, where both materials and engineering personnel were available, they tried to create armored vehicles "according to science." There was even a certain "serialization" of production, and they tried to install weapons in the towers. Photographs have come down to us depicting fairly sophisticated armored cars (at least they are at the level of the BA of the First World War!) With dome-shaped armored towers or even with turrets installed on them from our padded tanks T-26 and BT-5. It's just where, by whom and when all these machines were built, alas, is unknown, because after the victory of the nationalists, all the documents by which it was possible to find out at least something about this were simply destroyed. Again, judging from the photographs, some of these BAs belonged to Francoists and took part in the Victory Parade in Seville in 1939.

Here it is this armored car with the identification badge of nationalists, which was shown at the parade in Seville. There is also a photo of him on a dirt road!
The original technical solution to increase the cross-country ability on these BAs were twin wheels, the outer wheels were of a smaller diameter, and the inner ones were larger. When the wheels of a larger diameter sank in all this when driving on loose soil and mud, the wheels of a smaller diameter gave the car an acceptable support. However, it is doubtful that even such BAs were used off-road: the large weight of the armor and turret from the tank, no doubt, greatly increased their pressure on the ground. But some armored cars, manufactured at the factories of Barcelona, ​​were made from tanks cut into parts, while ventilation "mushrooms" in the form of samovar pipes were made for ventilation above the front seats - an original, but outwardly funny solution!

Another BA in the form of a "home on wheels". The arrows fired through the embrasures 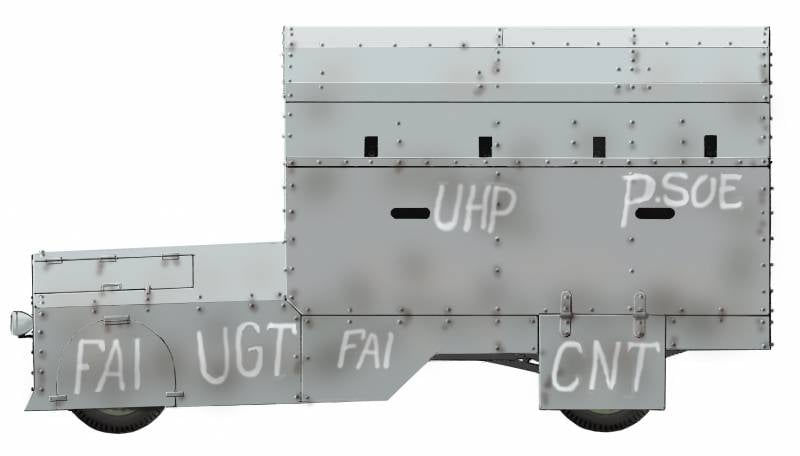 There are a lot of such armored vehicles in the photographs of the war period.
It is interesting that the command of the nationalists did not approve of all this improvised armored vehicles, and if it used them during the war, then only the most perfect or of the same type. So, on the chassis of the Ford Times 7V car, the nationalists made an armored car, which was used as a self-propelled mortar. It had an armored vehicle with an 81 mm mortar, an armored cockpit and an engine hood. It was possible to put a machine gun on it, and after removing a mortar from it, use it as an armored personnel carrier and transport soldiers. It is believed that in the units where these BAs were used, they have proven themselves very well.

This "tiznaos" on the tractor chassis was painted long and hard. And you don't need camouflage!
For some reason, all these homemade armored cars of the Republicans called "tiznaos" - "gray". But judging by the photographs, many of them were painted with camouflage, sometimes very whimsical. The whole point, apparently, is that there was an instruction in 1929, according to which the armored vehicles of the Spanish army should be painted in "Artillery gray" (medium gray). 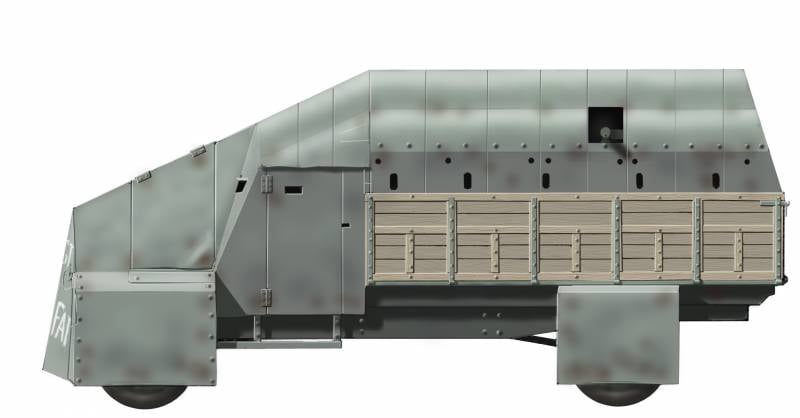 It was definitely not without boiler iron here ...
"Bilbao" - the armored vehicles of the Spanish army were also called "tiznaos", since both they and the home-made BA were painted the same way. The issue with the identification of the Spanish armored vehicles was also originally resolved. According to the same instructions, on the sides of the cars, it was required to have black wooden panels measuring 70 x 35 in order to write on them the army affiliation of a particular vehicle in white letters. For example, "Artillery" or "Infantry", and also the number of this vehicle. It is clear that since the beginning of the war, no one adhered to this rule, but in addition to coloring, the improvised BAs were also completely painted with inscriptions of patriotic content and abbreviated names of those syndicalist organizations (UHP, UGT, CNT, FA1) to which these armored vehicles belonged. Often there were several such designations on the car, which spoke of the "unity" of these organizations at the time of their construction. 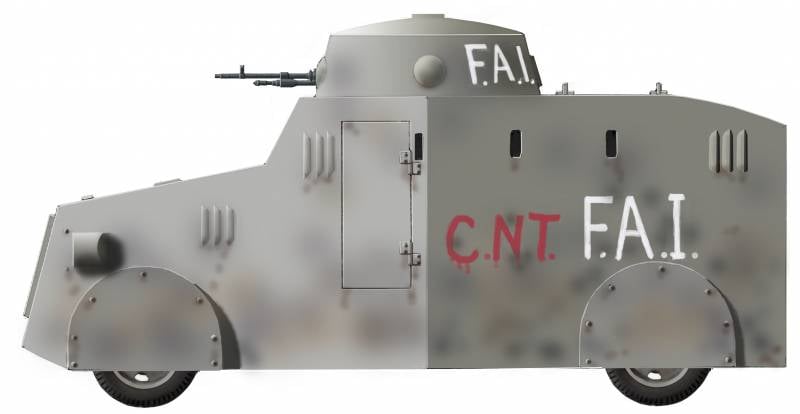 Quite modern in terms of the BA design. Well, and the inscriptions, of course, how without them?

And on this BA the tower for some reason stands at the stern so that it is almost impossible to shoot forward from it!
The nationalists apparently did not have any problems with the identification of homemade armored vehicles. As I saw a "barn on wheels", so you can shoot at it! But with tanks it was more difficult. The peculiarity of the civil war required their particularly quick identification on the battlefield in order to exclude destruction by "friendly fire". But the problem was compounded by the fact that both sides had the same tanks. Because of this, the identification marks on the tanks of the Spanish Civil War were very clearly visible.

Probably the most original Republican BA. Chains around the perimeter of the case attract attention - why are they? It is believed that they protected the wheels from shrapnel and did not make it possible to throw a grenade under the body of the car ...
At the towers of the republican tanks T-26, BT-5 and BA-Z, the cannon mask and the protruding stern part were often painted in large stripes in the colors of the national flag (red-yellow-violet). Also stripes, but already red-yellow-red, painted their tanks and nationalists. It also happened that such stripes were drawn along the entire tower. From the air, the tanks of the nationalists could be distinguished from the republican ones by the hatches (or the entire roof of the tower!), Painted white, and a black oblique cross drawn on them - a characteristic nationalist emblem. The tanks arriving from the USSR had only tactical numbers and no red stars. Italian and German tanks and armored cars had a striped red-yellow-red flag on the front and rear armor as an identification mark, as well as a very characteristic white emblem - crossed halberds and a crossbow. 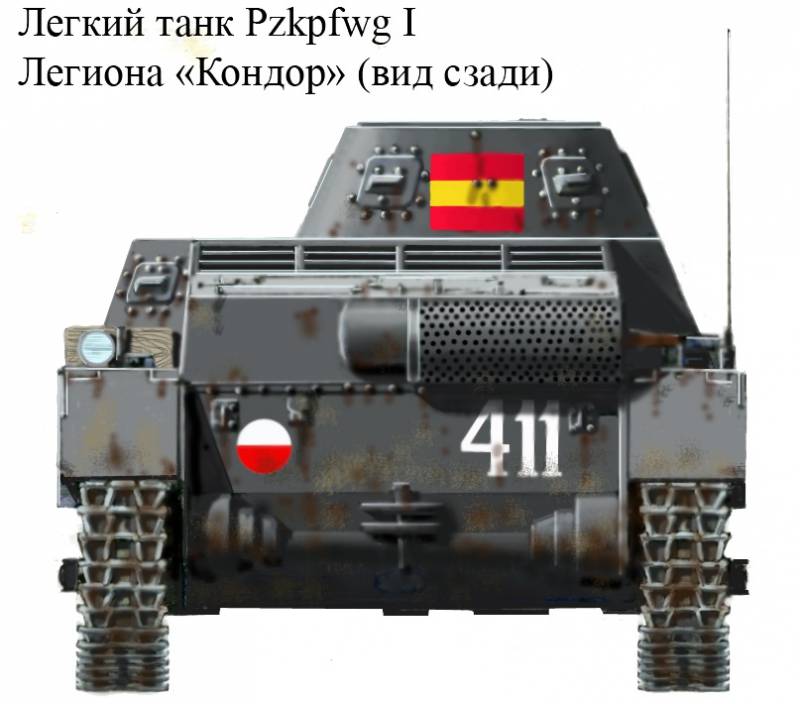 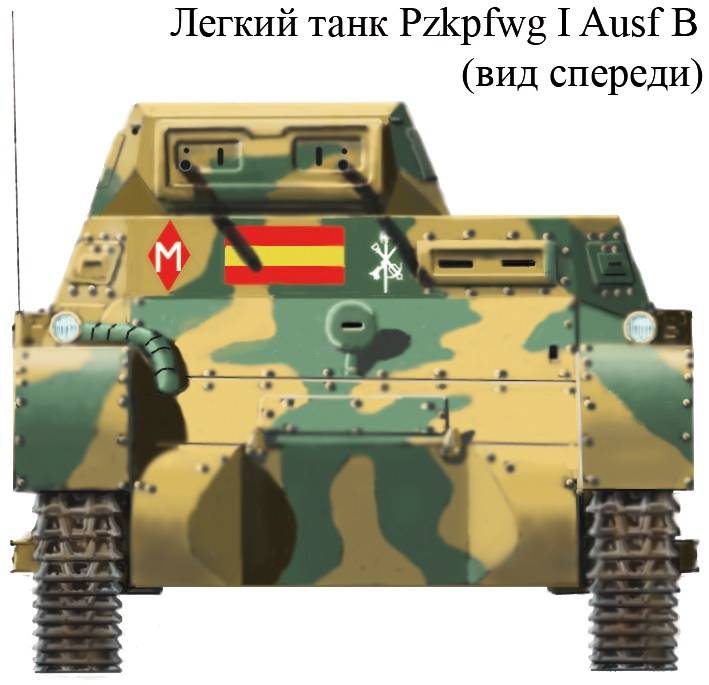 The same "Negrilos" in camouflage

Ctrl Enter
Noticed oshЫbku Highlight text and press. Ctrl + Enter
We are
Republican and nationalist tanks in the civil war 1936 - 1938 (part of 2)Is the "old" well forgotten to become the "new"? Part-2. At the call of honor and duty
Military Reviewin Yandex News
Military Reviewin Google News
63 comments
Information
Dear reader, to leave comments on the publication, you must sign in.