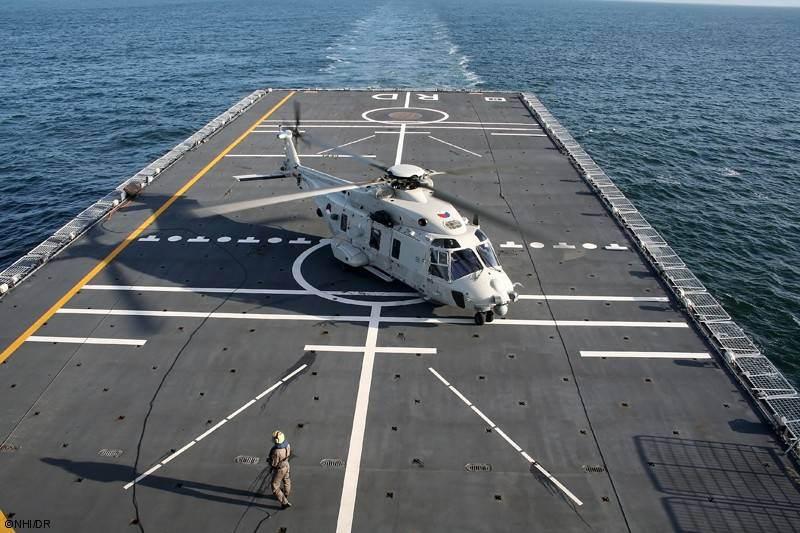 The European consortium NH Industries continues the serial production of the NH90 multipurpose helicopter family. Machines of various modifications are regularly handed over to one or another customer. The deck version of the helicopter, the NH90 NATO Frigate Helicopter (NFH), is quite popular. Significant quantities of such equipment have already begun service, and the next contract for its supply is expected to appear in the near future.

It should be recalled that the idea of ​​developing a "pan-European" multipurpose helicopter appeared in the mid-eighties. In the early nineties, a consortium of NH Industries was created, which was to solve this problem. The new organization brought together Eurocopter, AgustaWestland and Fokker, each of which was responsible for the development of individual components and assemblies.

The goal of the new NH90 project was to create a multipurpose helicopter in two versions, for army and naval aviation. The deck version was developed taking into account the limitations of existing ships and was named NATO Frigate Helicopter ("Helicopter for NATO frigates"). In the future, some operators assigned new designations to this machine. 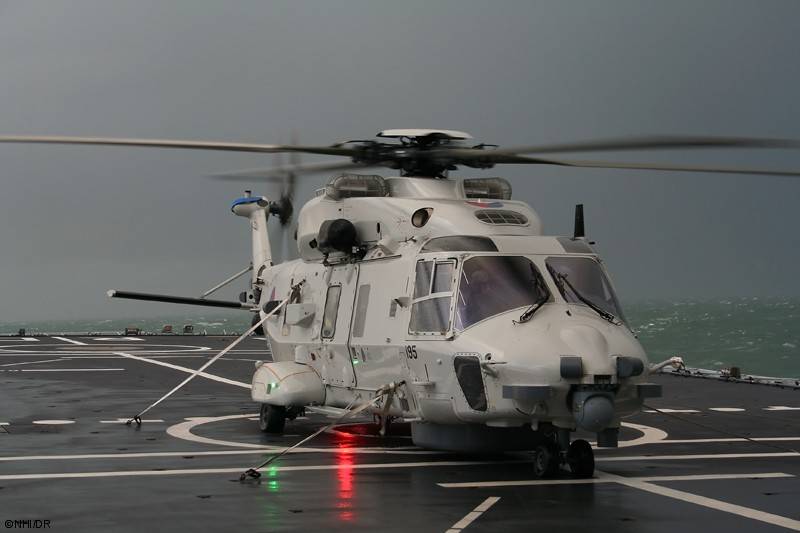 The first flight of the ground NH90 took place back in 1995, but testing and fine-tuning dragged on. At the same time, the timing of the NFH work has shifted. The first serial helicopters were built and handed over to the customer only in 2006. The equipment for naval aviation was put into series later. Despite delays in the testing phase, series production quickly picked up pace. To date, more than 420 helicopters of all modifications have been built and commissioned.

The promising multipurpose NH90 helicopter was developed taking into account the requirements and standards of NATO. Such measures greatly simplified the introduction of new technology in the Alliance countries - thanks to them, the NHI consortium did not encounter problems when searching for potential buyers.

The NH90 was built using state-of-the-art technology. Thus, the airframe has a mixed design based on metal and composite parts, which provides an optimal balance of performance. For the first time in world practice, a helicopter received only a fly-by-wire control system with an autopilot in all channels. The autopilot and other systems are coordinated by a pair of onboard computers with high-speed bus communication. 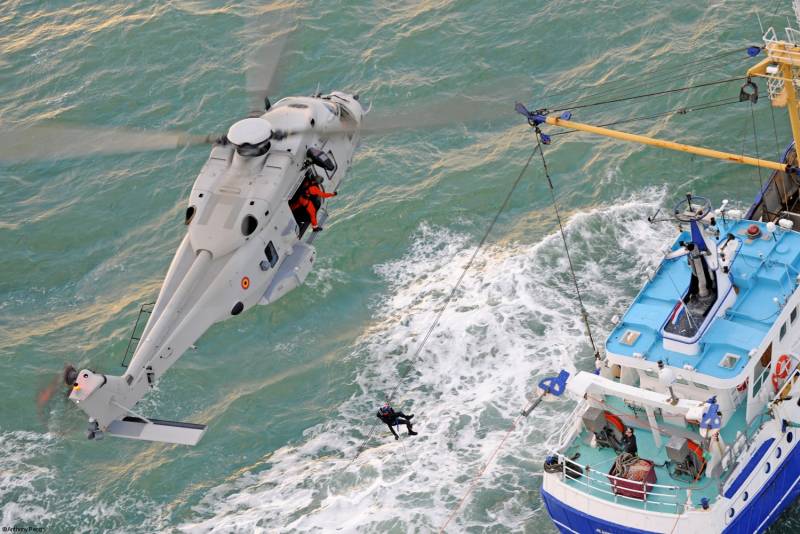 Belgian helicopter as a rescuer
The power plant consists of two engines. At the request of the customer, these can be General Electric T700-T6E products (2230 hp each) or Rolls-Royce Turbomeca RTM322 (2415 hp each). The torque is delivered to a four-bladed main rotor with a diameter of 16,3 m. capable of speeds up to 300 km / h and has a ceiling of 6000 m. The range reaches 800 km for the land version and 1000 km for the sea.

The helicopter crew consists of two pilots. Depending on the tasks assigned, they are complemented by the operators of the target equipment or the accompanying cargo. The cargo-passenger cabin can accommodate up to 20 people. Transportation of two standard pallets is possible. Up to 4,2 tons of cargo is transported on an external sling.

The NFH project provides for a number of measures related to operation in naval aviation. First of all, this is a special processing of parts, which increases their resource. A different set of airborne electronic equipment is envisaged, adapted for flights over the sea at any time of the day and in the entire range of permissible weather conditions. The capacity of the tanks has been increased, giving an additional 200 km of range. 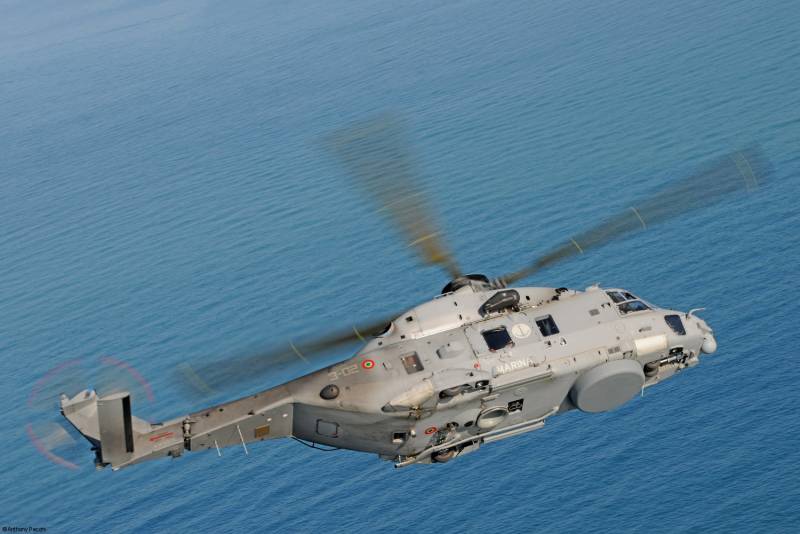 Italian NH90 in flight
The goals and objectives of the machine were revised. The main role of NH90 NFH is considered to be the search and attack of surface and underwater targets. For this, the helicopter uses radar and sonar systems. It also provides for the installation of anti-submarine and anti-ship weapons. It is possible to use Exoset anti-ship missiles, depth charges and torpedoes of various types with a total weight of up to 700 kg. With all this, the standard functions are preserved. The helicopter is still capable of transporting people and cargo, search and rescue on land and at sea, transmit and receive cargo, etc.

The first contracts for the supply of NFH helicopters appeared at the end of the 2010s. In 20, the first batch of such equipment was transferred to the Dutch naval forces - they became the first operator of the latest carrier-based helicopters. The contract provided for the supply of 12 helicopters, incl. 2014 NFH. In XNUMX, having received part of the ordered equipment, the Netherlands refused to accept the remaining helicopters due to the identification of a mass of flaws. In the shortest possible time, the NHI consortium resolved most of the problems, and supplies continued.

Back in the 100s, Italy planned to purchase at least 110-90 units. NH2011 has two main modifications. The first NFH helicopters were received only in 28. To date, 50 helicopters have been commissioned, and their production continues. Up to XNUMX helicopters are needed to meet the needs of the Navy. 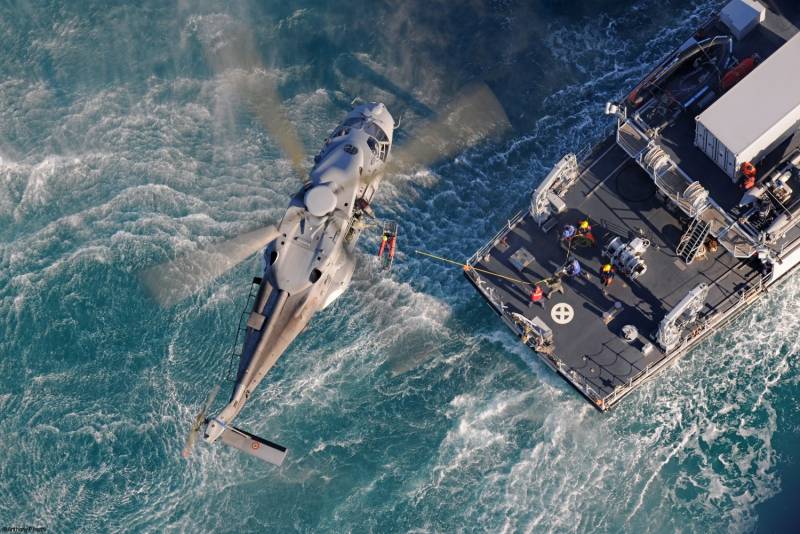 Italian Navy exercises
In 2012, deliveries of NH90 NFH helicopters began on a French order. As part of the French Navy, these machines received their own name Caïman. Curiously, the French Navy did not combine the functions of their helicopters. Specialized PLO helicopters and individual transport vehicles were ordered. Despite certain difficulties, disputes, etc., by now approx. 30 helicopters of this type.

In the fall of 2012, NH90 flight tests began in Belgium. At the beginning of next year, full-scale deliveries of serial equipment started. The Belgian customer has initiated some modifications, but in general the helicopter is similar to the French "Cayman". The Belgian Army and Navy received only 4 new type helicopters each. By now, a decision has been made to sell army vehicles, but naval vehicles will remain in service.

Very interesting история orders from Germany. In 2009, she signed a contract for 30 carrier-based helicopters and up to 80 aircraft for army aviation. Later, in 2013, it was decided to reduce the order for new NFHs by rebuilding this modification of land vehicles. It is curious that until this time the construction of deck helicopters had not begun. 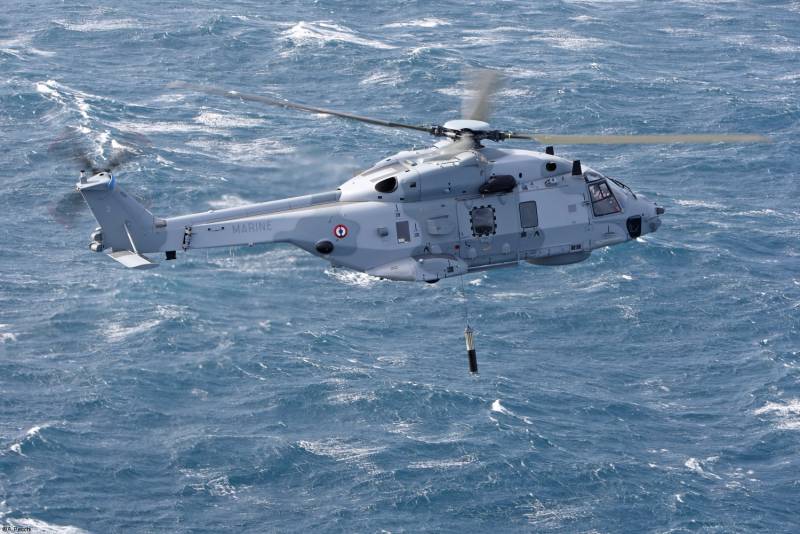 Anti-submarine modification for Germany
In 2015 Germany announced a new adjustment to its plans. Now it was proposed to develop another modification of the NFH, which fully meets the German requirements. The first helicopter of this type, called the Sea Lion, took off at the end of 2016. It differs from the base helicopter in a simplified set of electronics, lack of weapons, etc. In 2019, the NH90 Sea Lion was formally adopted, but procurement and operation were postponed due to the need to correct newly identified deficiencies.

In 2019, the development of another helicopter modification for the German Navy began. NH90 Sea Tiger builds on the French Caïman theme and will have to fight enemy submarines and ships. In the plans fleet purchase of 31 such helicopters. The other day the Bundestag allowed to order this technique with a total cost of approx. 2,7 billion euros. The first Sea Tigers will reach operational readiness in 2025 to replace obsolete helicopters built in the XNUMXs.

To date, the NH Industries consortium has built and delivered more than 420 NH90 helicopters in several major modifications to customers. The share of the deck modification NH90 NFH is still small, only a few dozen such machines have been built. In parallel with production, the development of new modifications and modernization projects continues, incl. specifically for individual countries. 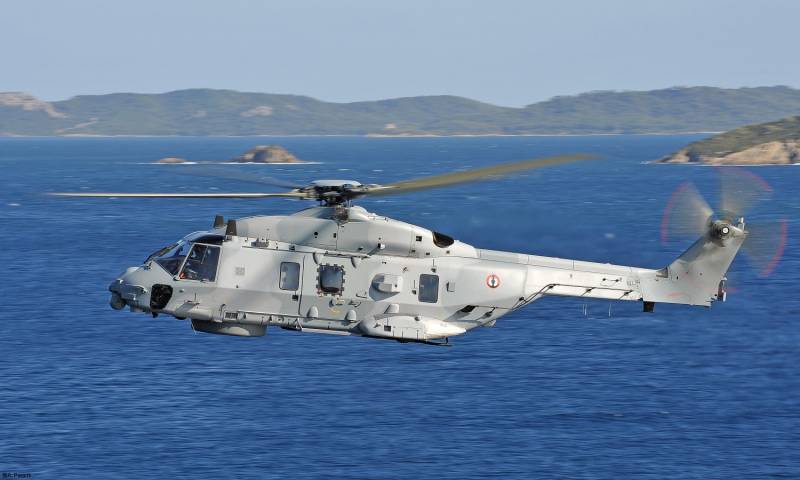 Built and delivered to customers, NH90 NFH helicopters are successfully operated and fly from airfields and ships of various types. Such a technique regularly takes part in the exercises of the Navy and performs all its tasks. Also, ships with NFH helicopters were involved several times in real operations off the coast of Europe and in remote regions.

In general, the project of the NATO Frigate Helicopter carrier-based helicopter can be considered successful. Despite the problems during testing and development, he reached mass production and service in the fleets of several countries. The operators face some difficulties, but they are mostly coped with. As for the small number of built and sold helicopters, it is explained by the specifics of the project. The Navy requires less aircraft than the Air Force. In addition, not all potential buyers of NH90 NFH are willing and able to purchase it.

Thus, the deck modification of the "European" NH90 helicopter is already showing good commercial success for its class, and also demonstrates a high modernization potential, allowing it to be adapted to the needs of specific customers. Serial production of such equipment continues, and new modifications appear. This means that the international consortium NHI has coped with all the difficulties and fulfilled the task set to create a "pan-European" helicopter.

Ctrl Enter
Noticed oshЫbku Highlight text and press. Ctrl + Enter
We are
Aviation against tanks (part of 23)An-12 in Afghanistan
Military Reviewin Yandex News
Military Reviewin Google News
11 comments
Information
Dear reader, to leave comments on the publication, you must sign in.