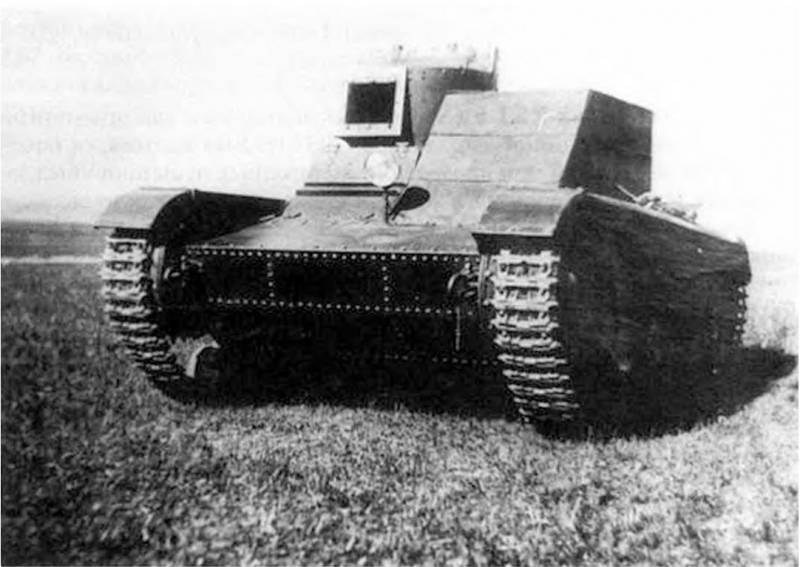 The only MXT-1 on trial

At the beginning of the thirties, the topic of armored chemical vehicles capable of using toxic substances or degassing the area was being worked out in our country. One of the most interesting developments of this kind was the MXT-1 chemical mortar tank, built on the basis of serial equipment. It is noteworthy that this project was created not in one of the central institutes or design bureaus, but in the troops.

The MKHT-1 project (in some sources the spelling KMT-1 is found) was launched in 1935 on an initiative basis. Chief of the chemical troops of the Trans-Baikal Military District, brigade commander G.I. Brynkov had an excellent idea of ​​the material part of the divisions and the ongoing work to create new models. Apparently, he also decided to take part in the rearmament process and came up with a new idea. He proposed to rebuild a serial light tank into a carrier of a large-caliber chemical mortar.

The development of the technical design was entrusted to the military engineer Ptitsyn, who served in the 6th mechanized brigade of the ZabVO. The implementation of the project in metal was entrusted to the workshops of the brigade. All the work was completed in the shortest possible time, and in the summer of 1935 the prototype MXT-1 tank entered field tests.

It should be noted curious points related to the classification of the MXT-1. The authors of the project designated this vehicle as a mortar chemical tank - this name took into account the type of chassis, weapons and tasks to be solved. In accordance with the modern classification, the MXT-1 should be called a self-propelled mortar on a tank chassis. However, this would not change the range of tasks to be solved.

A serial light tank T-1 mod. 26 armed with two towers. A minor restructuring of the hull and fighting compartment was proposed, while maintaining most of the details. The layout, with some reservations, remained the same. The power plant and chassis were in line with the basic design, which provided the desired mobility.

The tank lost its left turret and a sheet under it, instead of which a wheelhouse was installed. On an experimental machine, it was made of plywood. The deckhouse had vertical sides and a horizontal roof. The inclined front sheet was a hatch flap that folds forward. Part of the roof was also made movable. By opening the wheelhouse hatch, the crew could fire from a mortar. In the future, a full-fledged armored wheelhouse was supposed to appear.

The entire left half of the fighting compartment was given over to a 107-mm chemical mortar. With the type of this weapons there is some confusion. Thus, some sources claim that the tank was carrying a mortar of the XM-31 type, but such a product is absent in other literature. Apparently, we are talking about a chemical mortar XM-107 arr. 1931 developed by "Group D". There is a version about the use of the XM-4 mortar from the Krasny Oktyabr plant, also created in 1931. It looks implausible, since the XM-4 product was released in only a few copies, which could hardly have got into the ZabVO units. 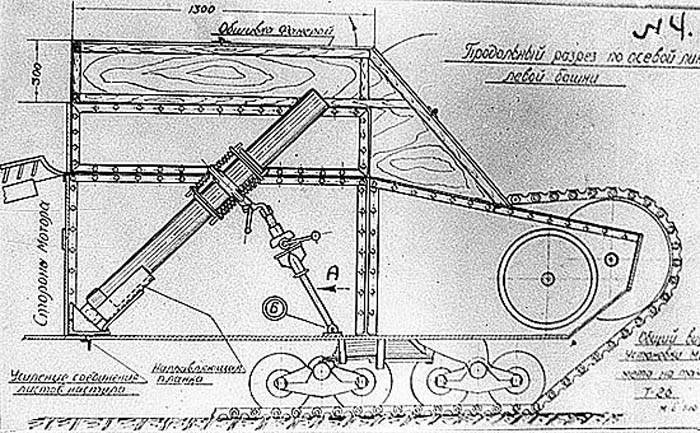 Housing tank in the context
The mortar, probably XM-31 / XM-107, was installed on the bottom of the hull at three points using a standard biped. Instead of a base plate, a special device with a shock absorber made of rubber and felt was used. Such a support was rigidly attached to kerchiefs in the corner between the floor and the rear wall of the fighting compartment. The mortar installation made it possible to carry out horizontal guidance within a small sector. Vertical aiming was provided by bipod mechanisms and varied from 45 ° to 75 °. For guidance, a quadrant and a telescopic sight of the TOP type were used.

The KhM-107 chemical mortar was a 107-mm smooth-bore muzzle-loading gun with a 1400 mm barrel. Initially, it was carried out and had a wheel drive.

For the KhM-107, several types of 107-mm mortar mines were intended. It was proposed to use high-explosive fragmentation ammunition, as well as chemical mines with military and unstable toxic substances. There was a smoke mine. The mass of mines of various types was 6,5-7,2 kg, the firing range reached 3-3,2 km. When bursting, a mine with phosphorus equipment created a cloud of smoke 10 m wide and up to 100 m long downwind. Mine with mustard gas hit an area of ​​at least 80 sq. M. On the same area, a smoke cloud of unstable toxic substances was formed.

The ammunition load of the MXT-1 mortar tank consisted of 70 mines of all types. They were transported on several racks in the fighting compartment. The supply of mines to the barrel was carried out manually, the loader was in the wheelhouse to the right of the mortar. The maximum rate of fire was determined at 15-16 rounds per minute.

In accordance with the project, the MXT-1 tank was supposed to keep the right turret from the base T-26 with machine gun armament. For self-defense, the crew relied on a DT machine gun in a frontal mount. Ammunition consisted of 28 stores - 1764 rounds. As can be seen in the surviving photographs, the prototype tank did not have a machine gun mount. The remaining embrasure was not covered with anything.

The crew of the Moscow Art Theater-1 included three people. In front of the hull, in its usual place, was the driver. A machine gunner commander worked in the tower. In the fighting compartment there was a mortarman in charge of using the main weapon. The driver and commander had to use standard hatches and observation devices of the T-26 tank. The mortarman had the opportunity to observe through the front hatch of the wheelhouse, which was open for shooting.

In terms of size and weight, the MXT-1 was almost the same as the T-26. This made it possible to maintain the characteristics of mobility at the same level. The protection also remained the same (when replacing plywood with armor). A machine with a mortar could work in the same battle formations with linear light tanks and support them with fire. 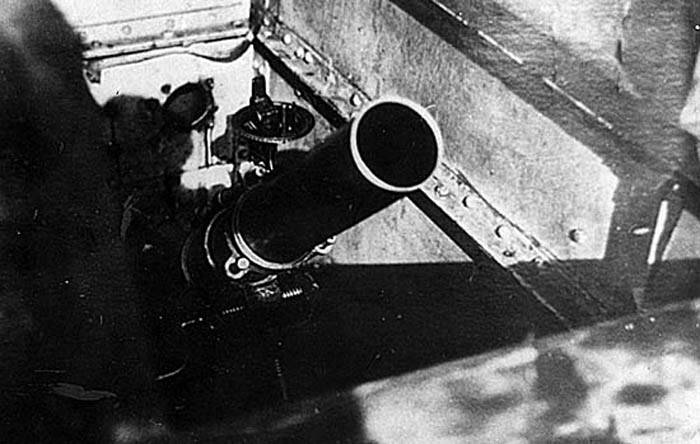 Fighting compartment with a mortar, view through the upper hatch
According to the idea of ​​the authors of the project, a chemical mortar tank could solve several tasks on the battlefield at once. With the help of fragmentation mines, he could attack enemy personnel and objects. Smoke mines were intended to block enemy observation and firing sectors. With the help of mines with BOV, it was possible to create small zones of infection and hit manpower. For the same purposes, ammunition with unstable substances should be used.

In July 1935, the workshops of the 6th mechanized brigade of the ZabVO completed the restructuring of one of the available T-26 tanks according to the project of comrade. Ptitsyn. The car was taken to one of the available test sites. Apparently, at the test site, the driving performance was checked, and then new weapons were tested. However, there is no exact data on the progress of the tests.

It is known that, according to the test results, the MXT-1 tank received a good rating. The car was recommended for adoption and production. However, the matter did not go further, and the armored vehicle remained in a single copy. The prototype, apparently, was dismantled as unnecessary or rebuilt back into a linear tank. The concept of a chemical mortar tank was also not developed - analogues of the MXT-1 were not created.

Unfortunately, the reasons for abandoning the MXT-1 project remain unknown. Probably, the main prerequisite for this was the "violation of chain of command" during development. The chemical mortar tank was created by the ZabVO military on an initiative basis and without consulting the command or specialized organizations. The command of the Red Army and industry had their own plans for the development of the subject of armored chemical vehicles, and the MXT-1 was absent in these plans, which significantly reduced its real prospects.

The version about the technical problems of the project has the right to life, although the available data may refute it. For example, it can be assumed that the powerful recoil of a 107 mm mortar on a rigid mount threatened the integrity of the tank. The bottom of the T-26 was only 6 mm thick and had adequate strength. However, the test results may indicate no problems with the strength of the case.

Other versions are also possible, affecting the design of the vehicle and weapons or its combat capabilities and characteristics. The true reasons for abandoning the MXT-1 are still unknown. Despite this, the MXT-1 project is of great interest from the technical and historical points of view. He did not reach the series and did not launch a new direction in the field of chemical armored vehicles - but this was one of the first attempts in our country to create a self-propelled mortar on a tracked chassis. Thus, the main idea of ​​the MXT-1 did not receive development, but other proposals, as it turned out, had a great future.

Ctrl Enter
Noticed oshЫbku Highlight text and press. Ctrl + Enter
We are
Is the "old" well forgotten to become the "new"? Part-2. At the call of honor and dutyUnusual tanks of Russia and the USSR. МХТ-1 (mortar chemical tank)
Military Reviewin Yandex News
Military Reviewin Google News
21 comment
Information
Dear reader, to leave comments on the publication, you must sign in.