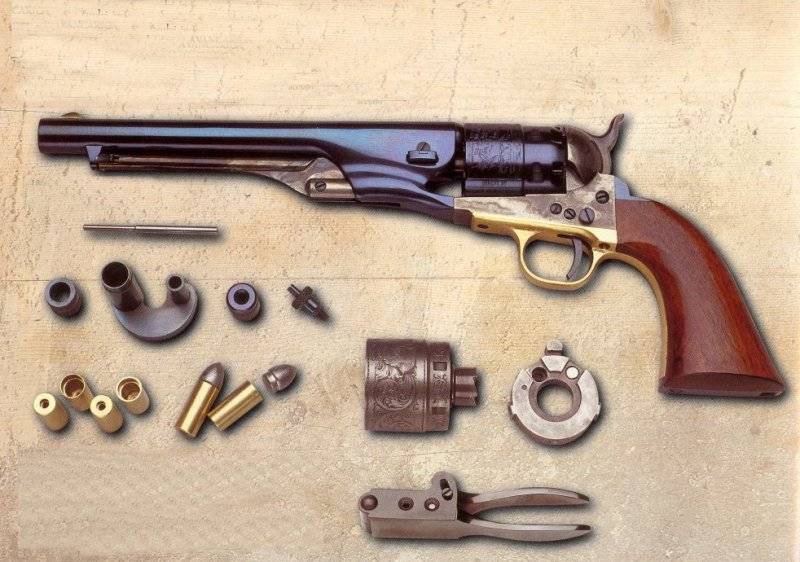 Naval revolver "Colt" 1861 caliber 9.14-mm (.36), reworked according to the system of Alexander Tuer. From left to right: Tuer's cartridge and device for their independent equipment; a drum with a protruding axis and a “ring” on which two “strikers” are clearly visible: one “firing”, the other extracting. Bullet is the most common

Military affairs at the turn of the eras


In 1862, the famous Samuel Colt died. The funeral was organized at the expense of the state, he left his widow Elizabeth Hart Jarvis with a capital of $ 15 million, but along with business, respect and money, many problems fell on the shoulders of this woman. And the first one was related to ... her husband's lack of perspective vision. Well, not everyone is given to "pierce" the time. Someone is limited by their arrogance, someone has a threshold of their incompetence, above which they can no longer rise. In a word, it often happens that even the most talented people pass by the "gift of fate", and then regret it all their lives. However, Colt himself could no longer regret the consequences of one of his ill-considered decisions. He died! 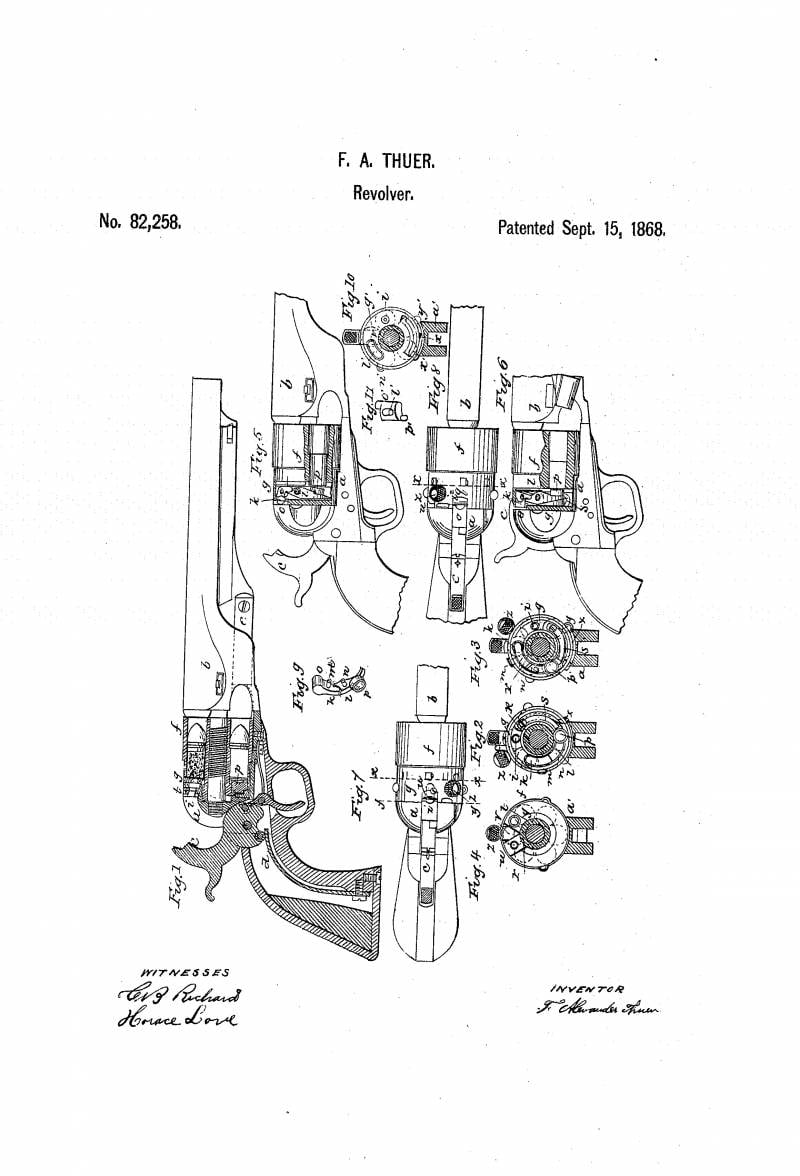 F. Alexander Thuer's Impts in Revolving Fire Arms. 13 August 1868. Department of the Interior. Patent Office. It clearly shows how the hammer of the hammer is located either against the upper cartridge in the drum, then replaced by the striker of the extractor, the working part of which is at the same time in the lower part of the drum
And it so happened that somewhere in the 1850s, Colt's employee Rollin White developed a mechanism for quickly loading a revolver. Since Samuel Colt showed no interest in White's mechanism, he left his company, but of course, he immediately patented his development. The patent drawing shows a drum drilled through, as opposed to Colt drums, which, as is known, were not drilled through. The patent was issued on April 3, 1855 for 7 years, was renewed once and was valid until April 3, 1869. The management of Smith & Wesson turned out to be more far-sighted, which acquired the rights to manufacture revolvers with White's drum, and already at the end of 1857 the company launched the first revolver for metal rimfire cartridges on the market. 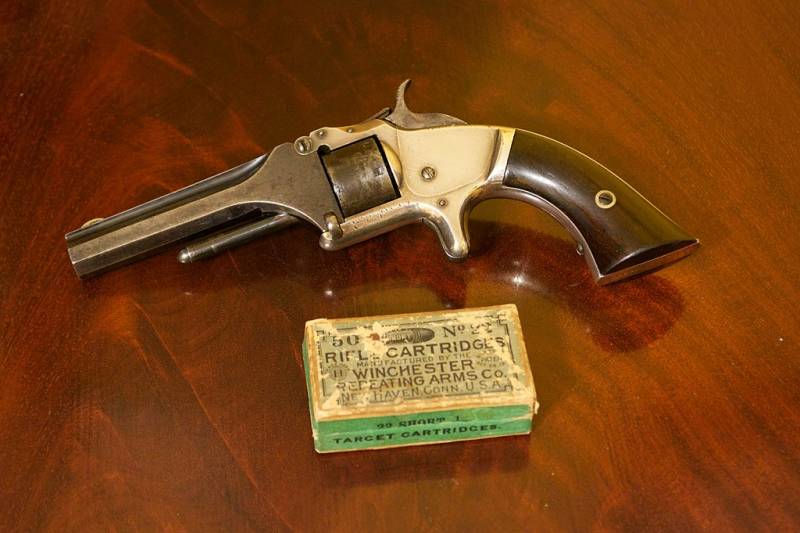 Revolver Smith & Wesson Model 1, type 2. In the photo you see a copy with two patent dates and a box of .22 short cartridges from Winchester.
One of Colt's main competitors, Remington Arms, also launched its Remington New Model Army revolver, as well as a number of models converted to metal cartridges. A conversion kit was offered for owners of Remington percussion revolvers. A patent inscription on the drum dated April 3, 1855 indicates that Remington was licensed for this modification from Smith & Wesson, the owner of Rollin White's patent.

It turned out that all other manufacturers weapons were bound by White's patent hand and foot. Of course, one could wait until April 1869 when his patent would expire. But there was no guarantee that he would not renew the patent for another 10 years, and most importantly, even seven years in the arms business is a whole era.

Tuer's Ring. The corrugated lever is clearly visible, with the help of which it was turned over to the position for discharging the revolver
And it was here that Colt's widow showed herself as a resolute and intelligent woman. In 1867, she convened a board of engineers at her company and invited them to create a revolver chambered for a metal cartridge while bypassing White's patent. And there was such a person - an engineer of the company F. Alexander Tuer, who developed a revolver that shoots metal cartridges, but at the same time did not violate White's patent! Patents for it were obtained on September 15, 1868 and January 4, 1870.

The design turned out to be very interesting. So let's take a closer look at it. So, the barrel of the revolver Alexander Tuer was drilled. But ... not through and through! That is, through and through, of course, how could it be otherwise, but only from the breech, the hole by about one eighth ... was blocked by a "cog" on the axis of rotation of the drum. Therefore, it could not be said that the hole in the drum is through. Further, cartridges with a copper sleeve were inserted into the drum not from the back, but from the front. They had slightly tapered bushings and were pressed into the chambers of the corresponding tapered shape from the front so as to be held tightly enough in it. 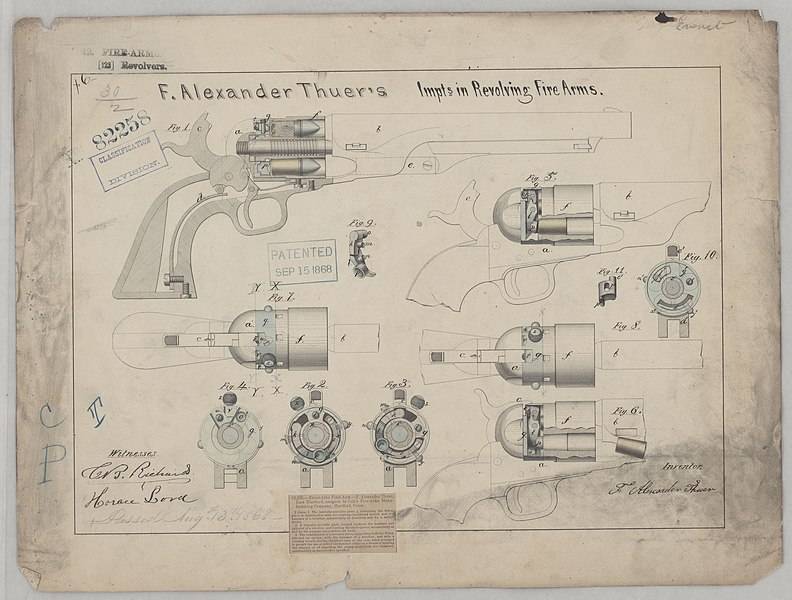 Detailed diagram of the Tuer revolver device. As you can see, everything is quite simple. The chucks are inserted from the front and held by friction. You shoot, as usual, but in order to discharge the revolver, you need to turn the ring by the grooved lever and ... pull the trigger six times in a row! To some extent, this accelerated the reloading of such revolvers, which could not but please fans of fast shooting. Before that, how much had they fiddled with reloading?
But the most original was the device that allowed you to shoot from this revolver and simultaneously discharge it. Behind the drum, the designers placed a ring that was put on its axis, inside which there was a spring and two strikers, one of which had a long rocker. One firing pin reached for the primer in the bottom of the cartridge case, the other touched only its bottom. When firing, the trigger hit the striker, which, in turn, hit the primer and fired a shot. But as soon as the ring was pulled back so that the hammer hit the firing pin on the rocker, when the trigger was pressed, he hit the bottom of the spent cartridge case and threw it out through the hole in the drum below.

Tuer revolvers were produced in different sizes: .49 Pocket, .51 Navy and .44 Army, and they were all six-shooters. Previously issued capsule revolvers were also occasionally altered. However, what was there to redo? The drum changed and the ring was added. And that's it!

And, nevertheless, Tuer's system was quite complex and expensive. In addition, it turned out that the cartridges were not always firmly held in the drum due to vibration caused by the shooting. Therefore, from 1868 to 1871, no more than 5000 copies of Tuer revolvers of all sizes and calibers were produced.

Interestingly, immediately after 1869, Colt launched a cartridge revolver chambered for the Colt House 1871 (4000 pieces), the Open Top Pocket in .22 caliber (3000 pieces) and the Colt Open Top in .44 Henry. Engineers Charles B. Richards (US Patent No. 117461, July 25, 1871) and William Mason developed modifications of percussion revolvers for rimfire and centerfire cartridges. And they were all much simpler in design than Tuer's revolvers. 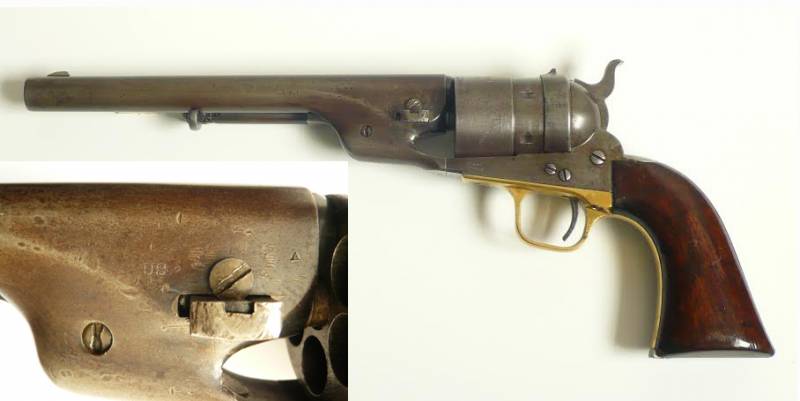 Conversion of the Colt 1860 Army B. Richards revolver. Left view
A model 1860 army revolver with an eight-inch barrel was prepared for the US Army. He fired Martin's .44 centerfire cartridges, which were in use by the army at the time, which was understandably considered a positive fact by the tight-fisted military.

In the 1860 Army Charles B. Richards, the rear of the drum was shortened and open holes were drilled into the caliber of the cartridge. A plate was screwed onto the frame behind the drum. In it, on the right, there was a loading opening with a flap that hinged downward, above which a visor was attached. The original loader under the barrel is replaced by a tube on the right with an ejector rod inside. 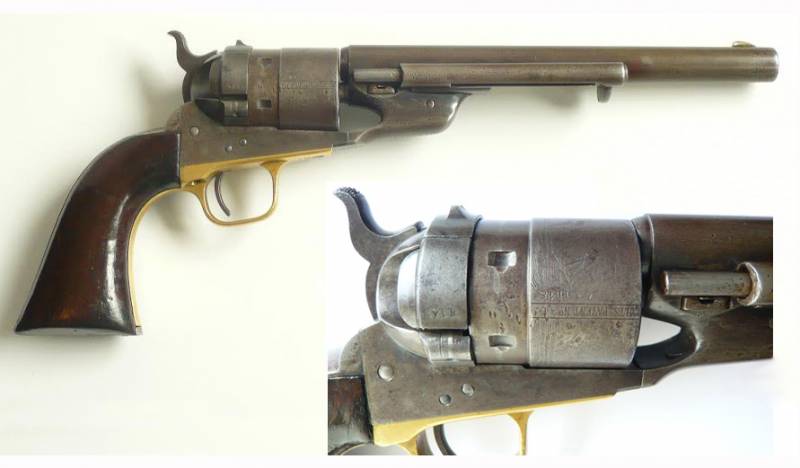 Conversion of the Colt 1860 Army B. Richards revolver. Right view
In the later Richards-Mason conversion, the drum was also replaced, and the firing pin was placed directly on the trigger. The Navy decided to use the Mason system for its Navy Mod. 1851 and 1861 revolvers in caliber 0,36 for metal cartridges of the same caliber .38 (0,36 replaced by a new caliber designation).

William Mason conversion: Navy Mod. 1861
For years, Colt had parts from the Pocket Model 1849 percussion revolvers and their successors Model 1862 Police and Pocket Navy in .31 and .36 calibers. The company modified them to match the William Mason system and sold all of these five-shot .36 caliber revolvers at reasonable prices. It was announced that private owners of old percussion revolvers could rebuild them at Colt for little money. 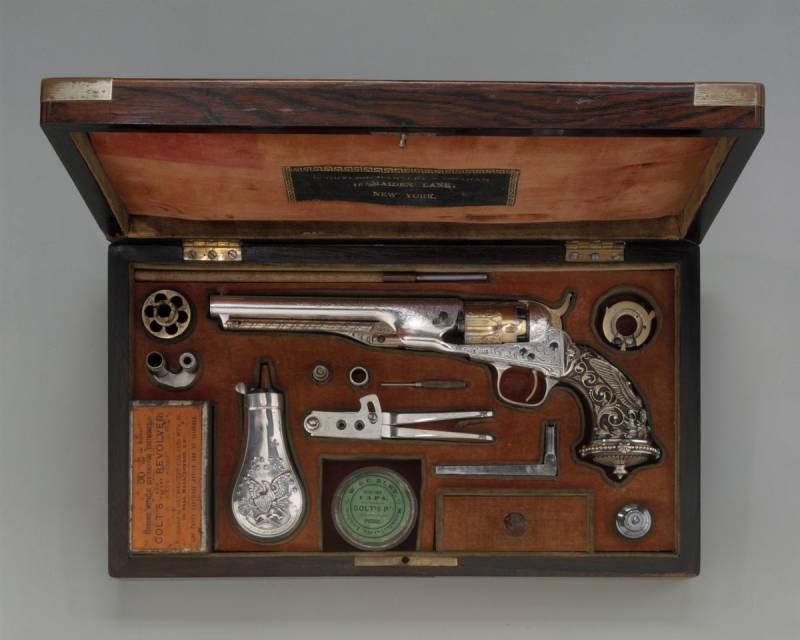 Very nice gift set of Tuer revolver. On the left, you can clearly see the drum and how exactly it was drilled "not completely"

Ctrl Enter
Noticed oshЫbku Highlight text and press. Ctrl + Enter
We are
Smith & Wesson Military & Polis is a revolver without flaws.Russian revolvers
58 comments
Information
Dear reader, to leave comments on the publication, you must to register.