The future of China's outer space: the reusable Tengyun system 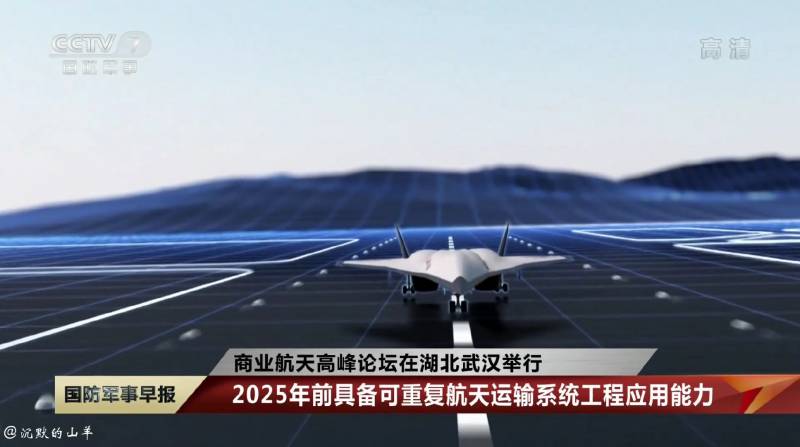 China continues to develop its rocket and space industry and explore new directions. In recent years, special attention has been paid to reusable space systems, and it is already known about the existence of several projects of this kind. Recently, industry representatives have clarified their plans for the promising Tengyun project.

It is reported that the corporation continues to work on the Tengyun reusable space system, and the design will take several more years. In 2025, CASIC plans to conduct the first full-scale flight of this system into orbit. The timing of the start of operation has not yet been specified.

The technical details and main characteristics of the Tengyun product have not yet been announced. However, this time they published a video of the system at different stages of flight. It shows the system as a whole and its individual components, general architecture and operating principles. 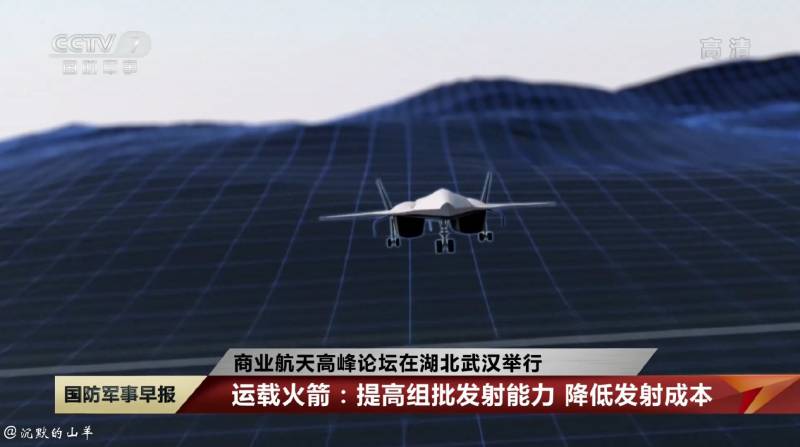 The existence of the Tengyun (Cloud Rider) project was announced in 2016. Then it was reported that CASIC, represented by individual institutes, was working on a new reusable space system. According to the plans of that time, development work was to take almost a decade and a half. The first flight of the system was assigned to 2030.

In October 2017, it became known that in the near future, the PRC plans to conduct the first launch of its own reusable ship. It was going to be completed in 2020. At the same time, the type of product, its capabilities and purpose were not specified.

In 2018, the leadership of the 3rd research institute CASIC revealed new details. At that time, the project was in its early stages, and it took several more years to complete this work. The goal of the Tengyun project is to create an aerospace system capable of repeatedly going into orbit and returning to Earth with people and cargo on board.

It was about a system consisting of an accelerator aircraft and a reusable spacecraft. Such a complex will be able to take off from virtually any airfield, go to the most convenient launch area and launch a space "plane" for launching into orbit. After that, the scavenger must return to base. Upon completion of the mission, the Tengyun apparatus must perform a horizontal landing at the airfield. 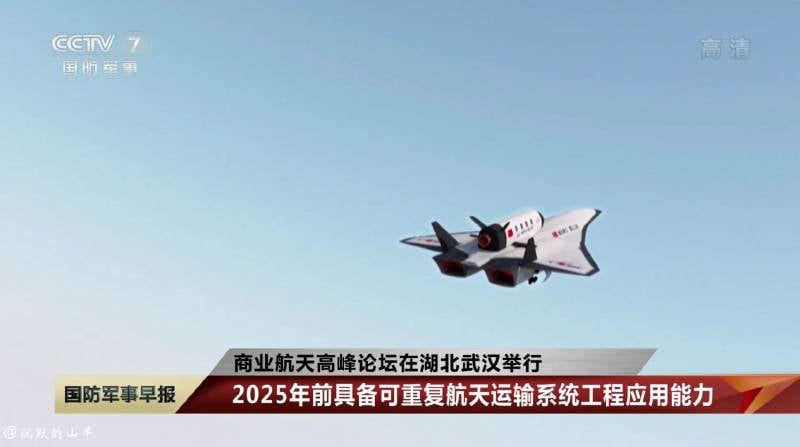 In the fall of 2018, it became known about successful experiments related to the reusable system. The separation of the booster and the space plane was worked out in the wind tunnel. When uncoupling system elements, a sharp change in flow occurs, which can lead to an accident. Chinese scientists have managed to work out this issue and create an effective aircraft separation system.

In September 2020, the first launch of an experimental reusable spacecraft took place in China. Probably, this was the start, announced back in 2017. There is no information about the connection of this launch with the Tengyun project, but its denials also did not appear.

According to recent news, the design of the Tengyun system is still ongoing, but the first flight will take place in 2025. It is possible that some progress has been made recently, which has made it possible to adjust the project schedule downward. Previously, the first flight was planned in 2030, and now it has been postponed five years to the left. It is quite possible that they will be able to start full-fledged operation in the previously appointed time.

Complex of the future

The published materials show the possible appearance of the future Tengyun system. In terms of its architecture and the appearance of its components, it resembles some foreign developments, but this can be explained by the proximity of the requirements and the solutions used. 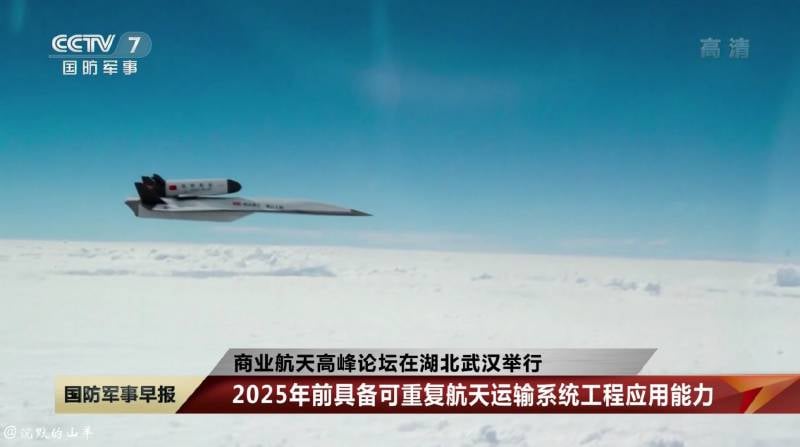 The ascent and initial acceleration of the space stage must be carried out by a special aircraft. A tailless machine with a delta wing and two keels is offered. The power plant includes four turbojet engines in two nacelles under the wing. To solve its tasks, the booster aircraft must be supersonic and high-altitude.

A space plane is placed on top of the booster, on a specially provided flat area. In promotional materials, it has an elongated large section fuselage with a rounded nose cone. The use of a delta wing and a V-shaped tail is proposed. In the tail is the only main engine nozzle. The parts of the airframe that experience increased temperature loads have the necessary protection and are black.

CASIC does not disclose the technical characteristics of the system, which contributes to the emergence of curious estimates and forecasts. Such assumptions are partially confirmed by the characteristic features of the appearance of the Tengyun system and foreign experience in the development of reusable space systems.

According to some versions and rumors, the booster plane may be hypersonic. To achieve these characteristics, it must have a combined power plant, combining turbojet and direct-flow components. The hypersonic speed of the booster, with all the difficulty of obtaining it, will reduce the load on the spacecraft's engines and will reduce the fuel supply, freeing up the volumes for the payload. 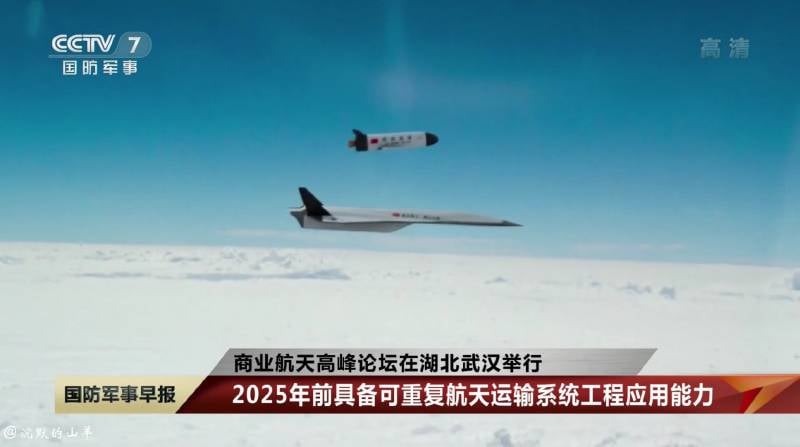 The availability of such technologies in China has not been confirmed, but also not refuted. At the same time, it is known about various researches and promising projects of rocket technology with the use of advanced technologies and assemblies. It is possible that fundamentally new components are being created for the Tengyun system, incl. special engines.

The developers of the project mention the main capabilities of the promising complex "Tengyun", but do not reveal the real tasks that he will have to solve. At the same time, when talking about its space developments, China traditionally talks about their peaceful and scientific nature and purpose.

The space plane will be able to take cargo and people on board and deliver them to various orbits. It can be used in independent missions of all kinds, both scientific and military. The device will be able to ensure the operation of space stations, delivering crews and cargo. In addition, Tengyun is theoretically capable of launching light satellites into orbit or returning such equipment to Earth.

It is very likely that the new complex - upon successful completion of the project - will find application in all these areas. The Chinese rocket and space industry is actively developing, and it needs any new means with certain advantages and characteristic capabilities. 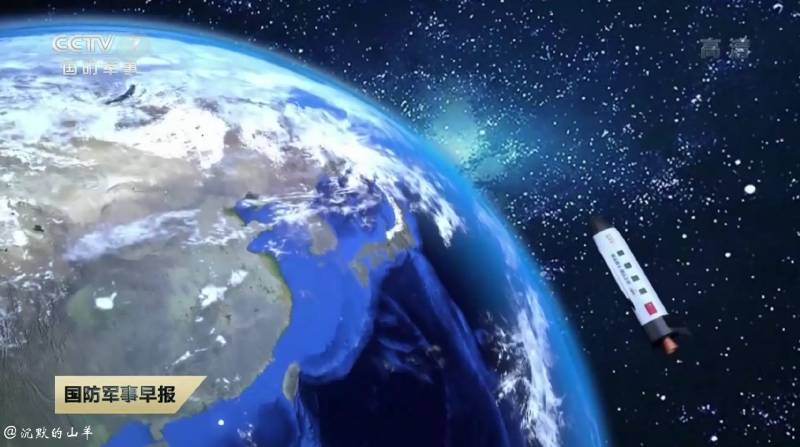 To date, several projects of aerospace systems of the Tengyun type have been developed, but none of them has yet advanced further than preliminary tests. Almost all such projects were closed due to the high complexity and lack of decisive advantages over other rocket and space technology.

Currently, in different countries, several projects of aerospace systems of different architecture with different capabilities are being created. These projects are expected to yield tangible results in the foreseeable future. Any of the new developments has a chance to reach testing and real operation - and become the most successful in its class.

The PRC has joined this race and is working on its reusable system. Within five years, it is planned to conduct the first test flight, and by the beginning of the next decade, full-fledged operation may begin. Thus, China with its Tengyun project has a chance to become a world leader. However, as in other advanced areas, this will not be easy and will require the utmost effort and competence.