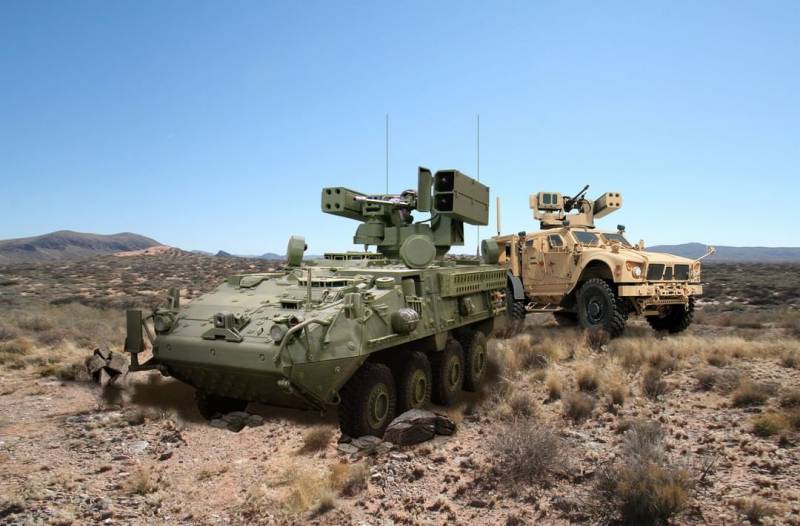 Since last year, General Dynamics Land Systems and Leonardo DRS, together with the US Army, have been testing the promising IM-SHORAD (Interim Maneuver Short-Range Air Defense) anti-aircraft missile and cannon system. Some of the checks have been completed and a new stage of testing has recently begun. Procurement plans have already been drawn up, but the work schedule has to be adjusted due to emerging difficulties.

Preliminary trials of several prototype IM-SHORADs began last year and were expected to expand in 2020. According to the plans of the army, this year all ordered prototypes in the amount of 9 units are to be tested. In March, it was reported that the current phase of testing will be completed by June, which will allow preparation for subsequent events to begin. The start of military tests was planned for the fall.

In mid-May, new reports were received on the progress of the project, the progress achieved and the difficulties encountered. By that time, the contractor had submitted five of the nine required vehicles for testing; they were being tested at various test sites in the United States. It was noted that the project is facing problems in the context of the integration of components and software, but all necessary measures are being taken.

Just a few weeks later, officials revealed other embarrassment. The COVID-19 pandemic and related activities are hampering development and testing, resulting in certain delays and deviations from the established schedule. Together with technical difficulties, this could lead to significant problems. First of all, the shift of the main events of the program to the right was expected.

In early August, it became known that the developers had finished fine-tuning the software and got rid of technical shortcomings. This made it possible to continue preparations for a new stage of testing, as well as to clarify plans for the future. In particular, it was not ruled out that the first contract for the serial production of a promising air defense missile system would be signed by the end of September. 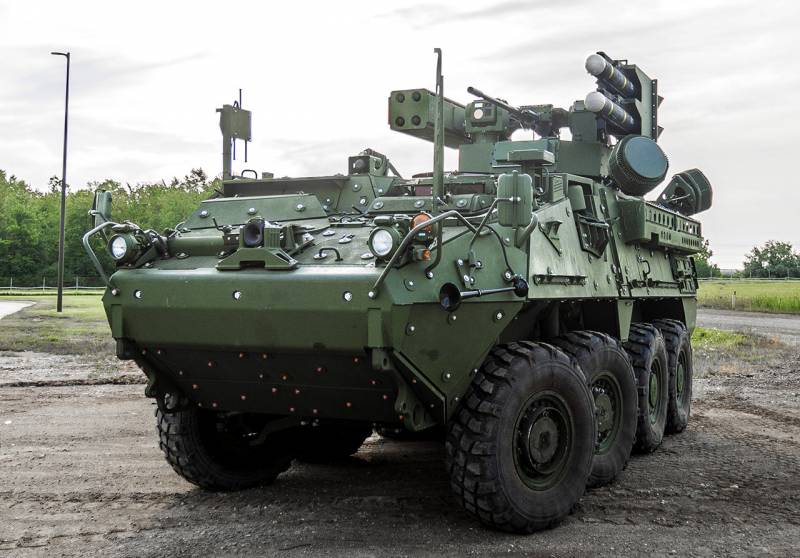 One of the experimental complexes. Photo by GDLS

The goal of the IM-SHORAD project is to create a new air defense missile system for equipping military air defense. Such a complex will have to work in the same battle formations with armored vehicles and infantry, being responsible for their protection from an air attack in the near zone. One of the main customer requirements was to reduce the cost of production and operation through the widest possible use of off-the-shelf components.

The sample presented for testing is a joint development of GDLS and Leonardo DRS. Other organizations were involved in the work as suppliers of various components. The base for the air defense missile system was the Stryker four-axle wheeled armored personnel carrier. It is equipped with a combat module RIwP (Reconfigurable Integrated-weapons Platform) with a variety of weapons, target search and fire control tools.

On the rotary base of the combat module, the MX-GCS optoelectronic equipment unit with day, night and laser channels is mounted. Radio equipment for identifying "friend or foe" is provided. In the center of the module is a swinging unit with a 30 mm M230LF automatic cannon and a 7,62 mm coaxial machine gun. On the starboard side is an SVUL launcher with four Stinger anti-aircraft missiles. On the left is the M299 installation for two Hellfire guided missiles.

IM-SHORAD can search for targets on its own or receive external target designation. Escort is carried out using optics, she is also responsible for the guidance of the receiver systems and preparation for the launch of missiles. The Stinger and Hellfire products use fire-and-forget, eliminating the need for in-flight missile controls.

The proposed appearance of the anti-aircraft complex allows solving a wide range of combat missions. First of all, IM-SHORAD must identify and destroy air targets - tactical aircraft and helicopters aviation, UAVs and guided weapons. Depending on the type of target and the range to it, it is possible to use cannon or missile weapons. The maximum range of destruction (provided by the Hellfire missile) exceeds 6-8 km. At shorter ranges, Stinger missiles or cannon are used. 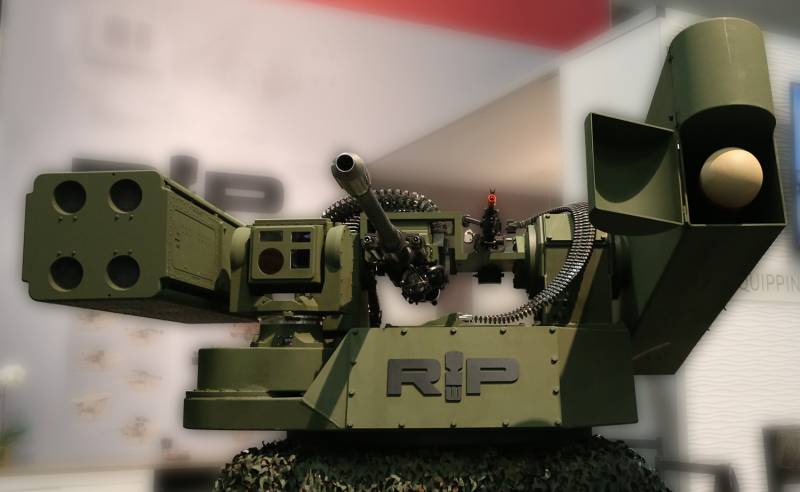 Combat module RIwP configured for IM-SHORAD. Photo Wescam.com
If necessary, IM-SHORAD can fire at ground targets. A 30-mm cannon and a coaxial machine gun must ensure the defeat of "soft" targets and lightly armored vehicles. Also, ground targets are hit by the Hellfire missile.

ZRPK is built on a serial platform and is armed with well-mastered ammunition. This ensures mobility and mobility at the level of other samples of army equipment, as well as simplifies supply processes. The IM-SHORAD project also allows the use of other basic platforms - at the request of the customer.

In the spring, the IM-SHORAD project was negatively affected by the pandemic. As part of the tests, it is quite difficult to comply with all sanitary requirements, which is why the work had to be suspended for some time. However, then the testers received the necessary protective equipment and changed the organization of work, which made it possible to continue testing.

Integration of components became a bigger problem. As the officials noted, all the main components of the air defense missile system have already been worked out and mastered. But their connection into a common complex turned out to be a rather difficult task. There were some difficulties in the context of software, the struggle with which took some time.

The IM-SHORAD project was developed in an accelerated mode so that the ground forces received a ready-made sample in the shortest possible time. It was argued that faster work led to faster manifestations of problems and shortcomings. Correcting them took time and delayed the testing process, which was already not the easiest one.

At the end of May, it was argued that all the existing problems lead to a revision of the work schedule. All future stages of the project are shifted to the right, the lag was estimated at several months. Nevertheless, the customer and developers assess the current state of affairs and prospects of IM-SHORAD with a certain optimism. They are going to carry out the remaining measures in the near future and start deploying equipment to the troops. 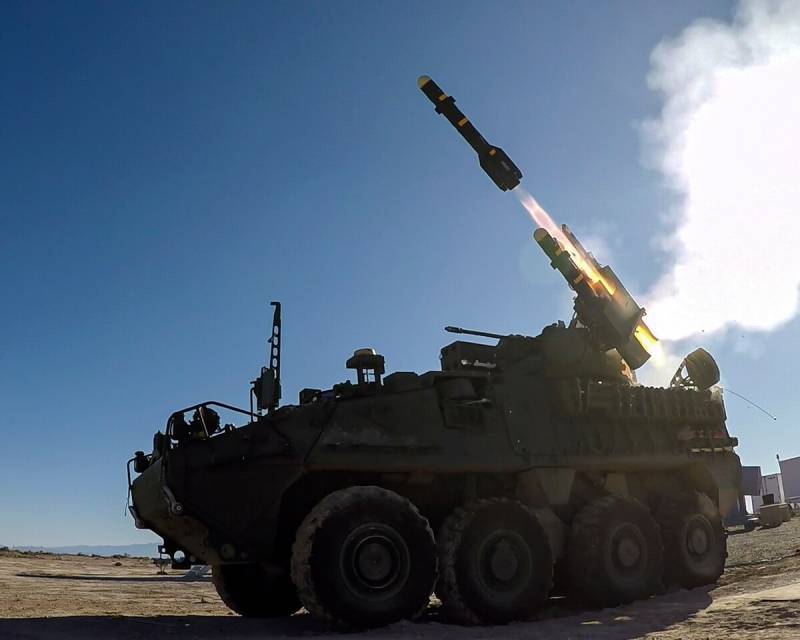 Hellfire rocket launch. Photo Leonardo DRS
According to open information, right now, several experienced air defense missile systems are undergoing military trials and are being tested in different regions of the United States under different conditions. The main problems have been eliminated, and the further fate of the complex has actually been determined. The first contract for the supply of serial equipment should appear in the near future.

In the past, the command spoke about the need to purchase 144 systems of the IM-SHORAD type. In September 2020, it was planned to sign the first contract for 32 combat vehicles, deliveries for which were to begin in 2021. Due to general difficulties, the signing of the contract is postponed by several weeks or months. Nevertheless, the principal decision has already been made - all that remains is to document it.

Serial air defense missile systems of IM-SHORAD will be transferred to units based in Europe. The Pentagon believes that the deterioration of the situation in the region leads to the risks of a full-scale armed conflict, during which the US ground forces will need a full-fledged military air defense. Thus, over the next few years, the European formations of the US Army will be able to improve their combat capabilities and reduce the risks associated with enemy aircraft.

From problems to exploitation

The project of the IM-SHORAD anti-aircraft missile-gun complex has several interesting features and shows interesting trends. An attempt to save money by using only ready-made components ran into problems at the integration stage. The increase in the pace of work has led to an acceleration in the identification of new shortcomings. Added to all this was a negative factor in the form of an epidemic.

As stated, all the shortcomings have been eliminated and the finished air defense missile system is undergoing the next stage of testing in anticipation of the launch of the series. This allows us to speak about the successful solution of the main tasks of the project, even if with a certain delay. However, for the most simplified project, even a few months turn out to be a serious delay.

Ctrl Enter
Noticed a mistake Highlight text and press. Ctrl + Enter
We are
Do we have many air defense systems? ZPRK "Tunguska" and ZRPK "Shell"The state of Syria’s air defense and the prospects for its enhancement with the C-300 anti-aircraft missile system
34 comments
Information
Dear reader, to leave comments on the publication, you must to register.