HeliRussia 2020: successes in a period of restrictions 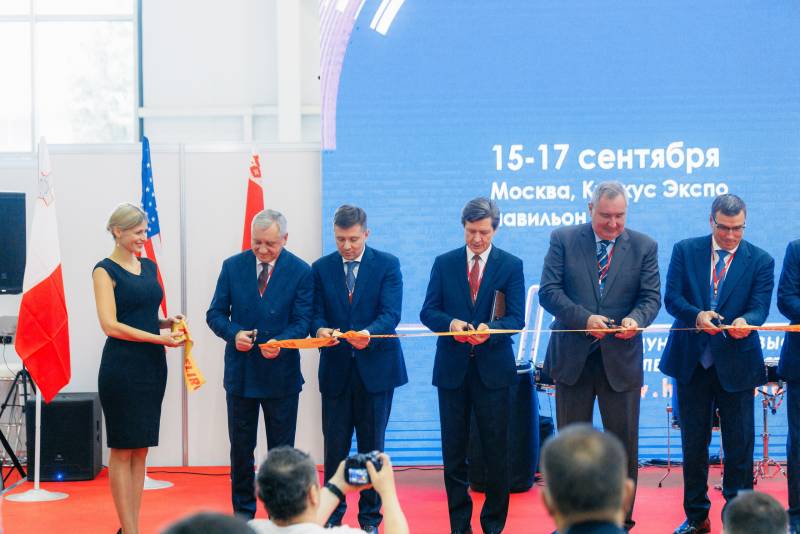 At the opening of the exhibition. Photo "Russian Helicopters"

The XIII International Exhibition of the Helicopter Industry HeliRussia 15 was held in Moscow from 17 to 2020 September. This time, the salon faced known problems and was not particularly large-scale. Nevertheless, a number of new and modernized developments were demonstrated there. Various events were held and new contracts were signed.

At the stands of the participating organizations and in the open area, one and a half dozen full-size aircraft of various types were demonstrated - manned and unmanned products. Aviation equipment developers presented more than 80 devices and assemblies. Fundamentally new technologies and the results of their application were demonstrated. 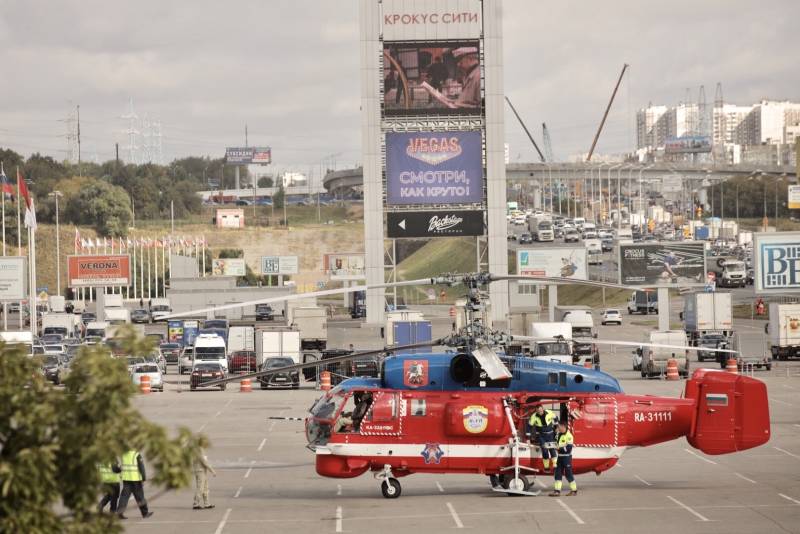 Multipurpose Ka-32A11BC - this exhibit arrived on its own. Photo "Russian Helicopters"
The business program of the exhibition started on the eve of the official opening. From 14 to 17 September, several dozen conferences, presentations and other events on various topics were held. Developers of equipment and units presented their new projects, businessmen discussed the specifics of their activities, etc.

This year, at HeliRussia, fundamentally new samples of manned helicopter technology were not demonstrated. At the same time, we presented several options for the development of already known machines with certain capabilities. We paid some attention to the "topical" topic - medical systems.

One of the most notable exhibits of the exhibition was the multipurpose Ansat helicopter from Russian Helicopters in a cargo-passenger version with new equipment. The helicopter received an additional fuel tank in the cockpit and inflatable ballonets on skis. The emergency landing system allows you to safely work over the sea; in case of landing, the helicopter can remain on the water for up to half an hour. The system has already received a certificate from the Federal Air Transport Agency. An additional 192 l tank increases the flight range by 140-150 km. 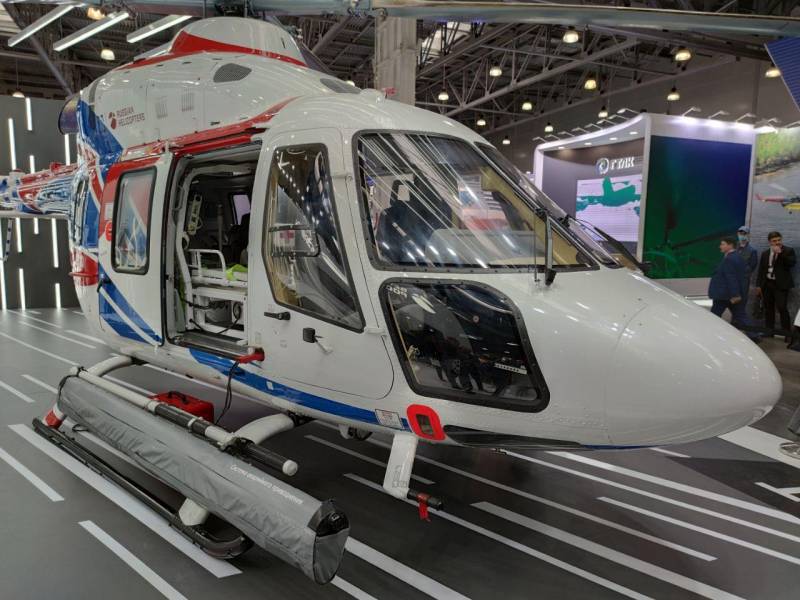 Ansat with an emergency splashdown system. Photo "Russian Helicopters"
Russian Helicopters also revealed their plans for further modernization of the Ansat. This year, a helicopter with a lightweight glider, new avionics, larger tanks and other innovations will be tested. Work continues on the integration of a winch for external load sling.

Foreign helicopter construction this year was represented by only one full-fledged model - the American Bell 505. It was noted that this newest model aircraft was not only delivered from the United States for the exhibition, but had already passed registration in Russia before it began operation. New helicopters of this type with a business class cabin will soon be handed over to Russian customers.

New market participants also presented their developments. Thus, the Russian company AGAN Aircraft showed a multi-purpose light helicopter KW 505. The machine is equipped with a piston engine and can carry four people. The KW 505 is offered for use in a variety of applications where the transport of people or small loads is required. In addition, AGAN Aircraft showed an unfinished prototype of the Bush 505SL light aircraft. 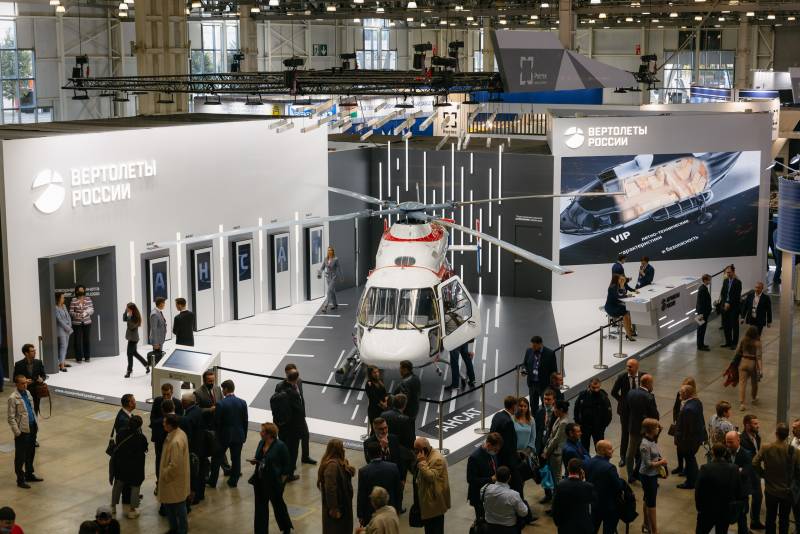 The same car from a different angle. Photo "Russian Helicopters"
At HeliRussia 2020, various devices and systems were demonstrated to solve various problems. The most urgent at present is the new development of Russian Helicopter Systems. This manufacturer of additional equipment offered an updated set of medical equipment for installation on domestic equipment.

An improved medical module with the necessary life support has been developed. It allows you to transport the patient without intermediate transfer at different stages. All movements, incl. loading and unloading from the helicopter is carried out by one person. A sealed box with a closed ventilation and air purification system was created for the transportation of infectious patients. The use of such a box makes it possible to protect doctors and pilots from infection.

The direction of helicopter-class UAVs was widely presented. For example, the Russian company “aviation auxiliary systems ”showed several samples of the new SmartHELI line. The SmartHELI-350 and SmartHELI-400 drones are intended for civilian structures and can solve surveillance and reconnaissance tasks. 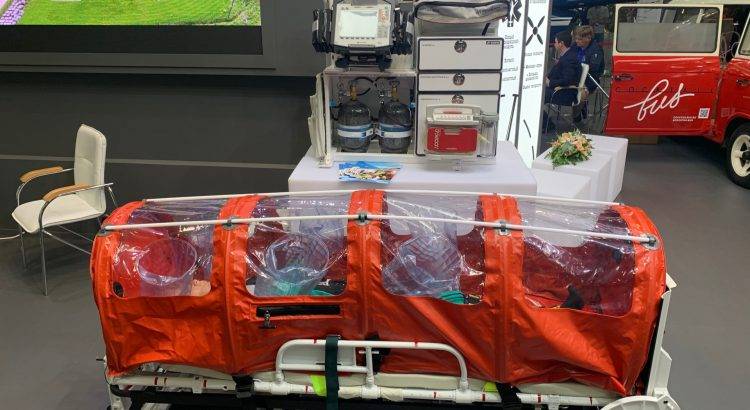 Sealed box for infectious patients. Photo "Russian Helicopter Systems"
Both products of the SmartHELI series are compact helicopters of a traditional design with the ability to install various payloads. Depending on the tasks set, an optoelectronic system of the required type or radar of one of the two models is mounted. Potential customers are offered both full-fledged UAVs with one load or another, as well as individual components.

At the joint stand of the Skolkovo Innovation Center, several resident companies presented their new drones of various types. Various organizations are working on the issues of creating UAVs for aircraft and helicopter architecture of various sizes and purposes.

During HeliRussia 2020, several new contracts of one kind or another appeared. Thus, on the first day, Russian Helicopters and Polar Airlines signed a new cooperation agreement. Earlier, they agreed on the supply of Ansat helicopters, the customer will receive the first machines next year. Now there is a contract for full service support of the supplied helicopters. 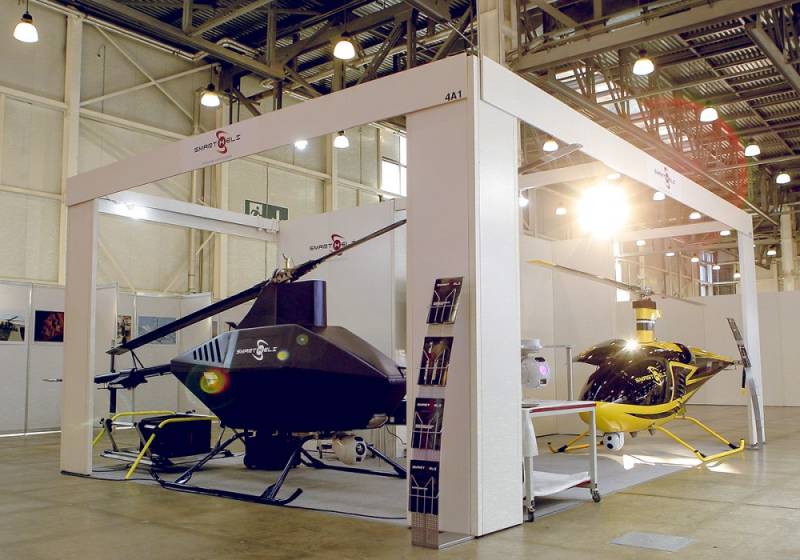 SmartHELI brand drones. Photo Bmpd.livejournal.com
JSC UEC-Klimov from the United Engine Corporation has signed a contract with the Indian airline Sky One Airways. The document provides for servicing the power plants of Mi-172 helicopters throughout the entire life cycle. The contract provides for cooperation for 5 years and will provide the Russian company with revenue of 700 thousand US dollars per year.

An interesting contract was signed by the First Flight aerobatic team and the Sterlitamak Petrochemical Plant. The latter will supply the group with aviation gasoline, which will simplify the group's activities and allow it to optimize costs.

This year, the pandemic has led to the cancellation of many international forums, exhibitions and salons. The Russian helicopter exhibition HeliRussia 2020 took place - but it was held on a smaller scale and is inferior to previous events in all main indicators. However, even with certain limitations, this event fulfilled its tasks.

Russian and foreign helicopter builders had the opportunity to show their developments - completely new samples and modernization projects. Also, new members of the industry, who have not yet managed to create a name for themselves, received the opportunity to declare themselves. As always, the exhibition has become a platform for signing new contracts.

Thus, epidemiological restrictions affected the quantitative indicators of HeliRussia 2020, but the exhibition retained its status and led to the desired results. It is hoped that next year the events will be held in full scale and without any restrictions.

Ctrl Enter
Noticed oshЫbku Highlight text and press. Ctrl + Enter
We are
According to the results of HeliRussia-2012The military helicopter segment is the fastest growing among all categories of conventional weapons.
24 comments
Information
Dear reader, to leave comments on the publication, you must to register.