How strong is the firepower of tanks in the combat units of the Russian army? 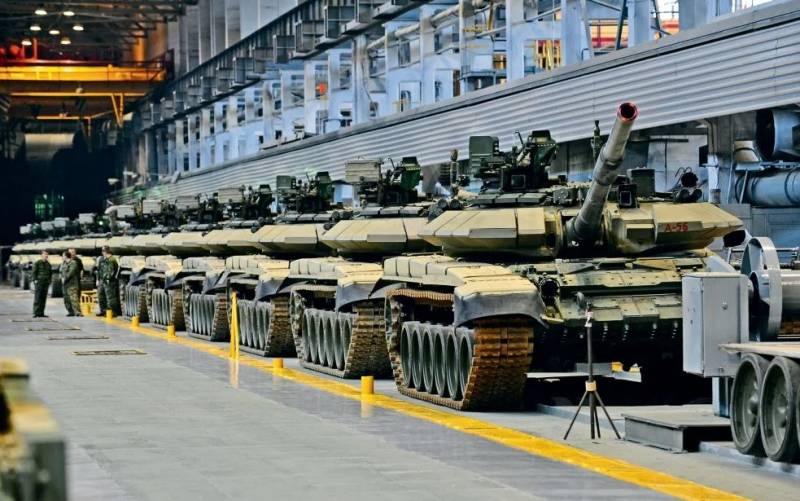 From the rather interesting article "Status Overview tank troops of the Armed Forces of Russia ", published on the basis of open sources, it follows that in combat units of the Russian army in 86 tank battalions there are 2685 tanks of various modifications T-72, T-80, T-90 and about 400 T-72 tanks in training centers. The composition of the tank fleet by types of tanks and their number in the troops can be presented in the following table.

Based on this information and based on the number and types of tanks in the combat units of the Russian army, it is possible to assess their technical level and capabilities, for example, according to one of the main criteria - the firepower of a tank. Firepower is determined by the main, auxiliary and secondary armament of the tank, the used ammunition and fire control systems.

All these tanks are equipped with modifications of the 2A46 cannon and the same machine guns as auxiliary and additional weapons. The use of the same gun makes it possible to use on all tanks a full set of existing and prospective artillery ammunition, limiting only the length of promising ammunition due to the sweeping of the automatic loader.

The effectiveness of the use of the weapons of these tanks is seriously different in terms of the ability to conduct effective fire due to the fundamentally different sighting systems of the gunner and commander and the tank's fire control systems.

Firepower of the T-72 family of tanks

The T-72 family of tanks has never had a full-fledged integrated MSA. The concept of sighting systems on them turned out to be far from the best; over time, simplified sights and devices were installed on tanks without serious linking into a single whole. In terms of fire efficiency, they were significantly inferior to the second group of tanks, and this trend extended to the latest models of tanks of this family.

The TPD-K1 sight was left as a backup sight. This is a modification of the TPD-2-49 sight with stabilization of the field of view only vertically, into which a laser rangefinder was built. Instead of TBV, there is a ballistic corrector for entering meteorological ballistic corrections into the sight to develop aiming angles and lateral lead, while the gunner must shift the aiming mark by the lead angle. The commander's sighting system includes the simplest unstabilized day-night sight TKN-3MK with a night vision range of up to 500 m, that is, the commander's ability to detect targets is much worse than that of the gunner.

On the T-72B3 (2011) tank, instead of the 1K13 sight, the Sosna-U multichannel sight with stabilization of the field of view vertically and horizontally is installed, containing an optical and thermal imaging channel with a night vision range of up to 3500 m, a laser guidance channel for a Reflex-M guided missile », Laser rangefinder and automatic target tracking with the output of the field of view on the gunner's and commander's monitors. The sight provides shooting from a standstill and on the move with a Reflex-M rocket at a distance of up to 5000 m.

The ballistic corrector calculates the aiming and lead angles and automatically enters them into the gun drives. At the same time, the Sosna U sight is located to the left of the TPD-K1 sight installed in the most optimal zone of the gunner's work, and when working with a multi-channel sight, it must deflect its body to the left, which creates serious difficulties in its work.

The commander's primitive sighting system based on the TKN-3MK day-night sight remained unchanged, while duplicate firing from the cannon from the commander's seat was implemented.

On the T-72B3M modification (2014), the commander finally got a perfect sighting system. Instead of TKN-3MK, a panoramic thermal imaging sight PK PAN "Falcon Eye" was installed with two-plane independent stabilization of the field of view, a laser rangefinder, television and thermal imaging channels, providing a range of vision during the day and at night up to 4000 m. The complex provides the commander with all-day and all-weather observation and search for targets, as well as effective firing from a cannon, coaxial and anti-aircraft machine guns.

On another group of tanks (T-80BV, T-80BVM, T-80U and T-90A), a different principle of building an integrated control system was implemented, laid down on the T-64B (1976) and T-80B (1978) tanks and led to the implementation on the tank T-80U (1984) the most advanced MSA. The sighting system of the T-80BV tank includes a gunner's sight "Ob" with a two-plane system of stabilization of the field of view, an optical channel, a laser rangefinder and a receiving channel of the radio command guidance system of a guided missile "Cobra". The digital ballistic computer calculates the aiming and lead angles from weather ballistic data and automatically enters them into the gun drives. The gunner's sight was integrated with the Buran night sight, and remote control of the Utes anti-aircraft machine gun was provided through the TKN-3MK commander's sight.

A more advanced sighting system was installed on the T-80U tank, the Ob gunner's sight was replaced with an improved Irtysh sight with a laser guidance channel for the Reflex missile, and instead of the TKN-3MK commander's sight, the PKN-4S commander's day-night complex was installed with stabilization of the vertical field of view and night infrared channel with a vision range of 1000 m and providing remote control of the anti-aircraft installation and duplicated control of fire from the gun from the commander's seat.

On the modernized T-90A tank (2006), the sighting system was seriously modernized, instead of the Buran gunner's night sight, a second-generation Essa thermal imager was installed with a night vision range of up to 3500 m and an automatic target tracking. The commander's sighting system has also undergone major changes. Instead of the PKN-4S sighting complex, a PK-5 combined telescopic sight was installed with independent stabilization of the field of view vertically and horizontally, a laser rangefinder, with television and thermal imaging channels providing a vision range of up to 3000 m. The introduction of a laser rangefinder into the sight allowed the commander to significantly to increase the effectiveness of duplicated firing from a cannon.

Not so long ago, the modernization of the T-80BV tanks to the level of the T-80BVM (2017) began, instead of the Essa thermal imaging sight and the Ob gunner's sight, a modernized Sosna-U multi-channel sight of the latest generation was installed with the replacement of the Cobra guided weapons by the Reflex -M ". It should be noted that all T-80BV tanks are subject to modernization to the T-80BVM level, since the production of the Ob gunner's sights and the Cobra guided weapons complex has long been discontinued.

A potential adversary has a much better situation in this matter, there, for a long time, on all modifications of tanks with M1A2 and Leopard 2A2, the gunner has installed multi-channel sights stabilized in two planes with visual and thermal imaging channels and laser rangefinders, and the commander has panoramic multi-channel sights with thermal imaging and television channels and laser rangefinders. Sighting systems are linked into a single digital tank control system, which ensures high efficiency of firing.

For Russian tanks, perfect sighting systems for the gunner and commander have already been developed, which are not inferior to Western models, but they have not yet come to their mass introduction on the existing generation of tanks in service. All this suggests that a serious modernization program is required for most of the tanks in combat units. Apparently, it is most advisable to gradually equip these tanks with a single unified Kalina fire control system, which includes a modernized multi-channel gunner's sight Sosna-U and a multi-channel panoramic sight of the commander's Falcon Eye, providing all-day and all-weather detection and destruction of targets by the gunner and commander with linking them into the digital information and control system of the tank. In terms of the effectiveness of firing, these tanks will be close to the level of the Armata tank or at its level.

At the same time, it is worth equipping the existing generation of tanks with a system of network-centric control of tanks on the battlefield and their interaction with a similar system of the Armata tank, which is so necessary at this stage, if it ever reaches the army.

The implementation of such a program largely depends on the capabilities of the industry for the production of components and component systems for the tank. In this regard, it is worth considering whether it is necessary to drive mass production of tanks with the same firepower that can be achieved cheaper by upgrading the existing fleet of tanks in the army and many thousands at storage bases.

Ctrl Enter
Noticed oshЫbku Highlight text and press. Ctrl + Enter
We are
Is the "old" well forgotten to become the "new"? Part-2. At the call of honor and dutyThe best main battle tanks of the world 2012 of the year
184 comments
Information
Dear reader, to leave comments on the publication, you must to register.