Sweden increases its combat readiness in the Baltic 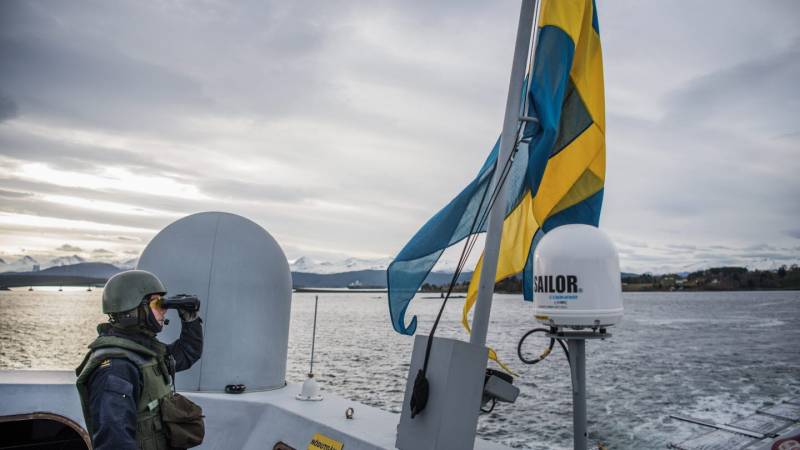 The Swedish naval forces can rightfully be considered one of the main forces in the Baltic Sea region. With a limited number and size, the Swedish Navy has modern equipment and weapons. Organizational structure and payroll fleet ensure effective work in the surrounding areas and fully meet the requirements of the Swedish defense doctrine.

The main task of the Swedish Navy is to protect territorial waters, islands and coastal areas from the aggression of third countries. Due to the neutral and non-aligned status of Sweden, the fleet must conduct such work independently, however, cooperation with the navies of other countries, primarily NATO members, is not excluded. In particular, Swedish ships regularly participate in international exercises.

The Swedish Navy does not have a large number of personnel. Directly in the fleet, approx. 1250 people. The Marine Corps also employs approx. 850. Most of the personnel are part of the ship's crews. 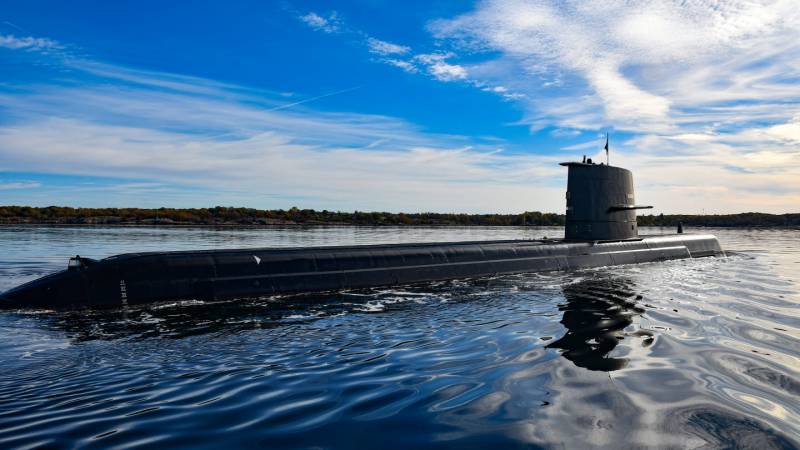 Non-nuclear submarine HMS Gotland
Several naval bases are located on the coast of the Baltic Sea. The largest is the naval base in Karlskrona, to which the bulk of the surface fleet and all submarine forces are assigned. There is also a training center for the Navy. Until recently, this base was the main one; the headquarters of the Navy worked on it. Since last fall, the force headquarters has been operating at Muskö base near Stockholm. This naval base was built in the rocks of the island of the same name and is one of the most protected facilities of the Swedish armed forces.

There are also a number of other basing points that ensure the operation of various formations and structures of the fleet. These are mainly units of patrol ships and boats, etc. 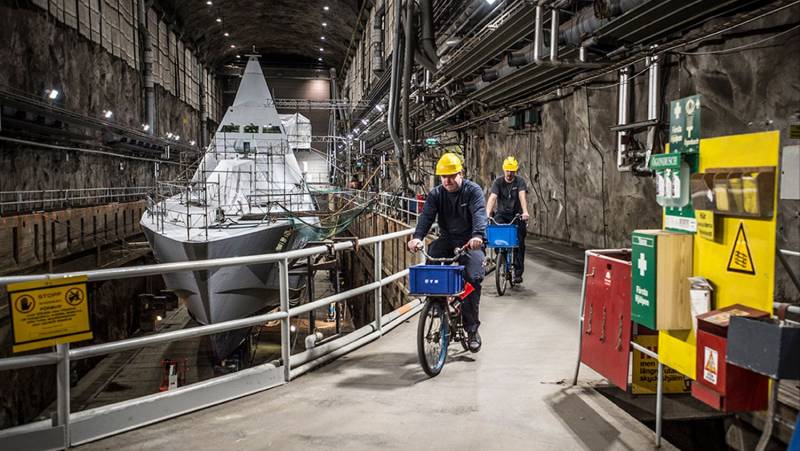 A Visby-class corvette in the Muskyo base tunnel
The organizational and staff structure of the Navy is quite simple. The combat strength is divided between three fleets. This is the 1st flotilla of submarines (Karlskrona), as well as the 3rd and 4th flotillas of surface ships, distributed between the naval bases of Karlskrona, Muskyo and Berg. The 1st Marine Regiment also serves in Berg.

Submarines from the 1st Flotilla are considered the basis of the combat strength. At the moment, Sweden has five non-nuclear submarines of two projects. Currently, work is underway to create a new project, which in the near future will allow replacing the oldest ships.

In 1989-90. two Södermanland-class nuclear submarines entered service. In the mid-nineties, three ships of the Gotland Ave. were built. Both projects provide for the use of an air-independent power plant, which significantly increases combat capabilities. The submarine forces are armed with torpedoes and mines of various types. 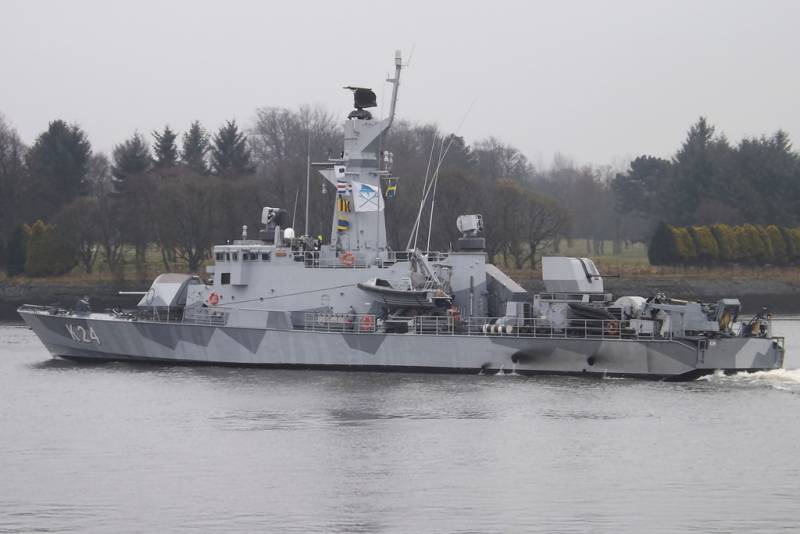 Corvette Sundsvall type Göteborg
Since 2015, construction of the submarine Blekinge, the lead ship of the project of the same name, also known as A26, has been underway. By the mid-twenties, the Navy wants to receive two such boats and replace the outdated Södermanlands. In the A26 project, VNEU and torpedo weapons are again used.

As part of the surface forces, two corvettes of the Göteborg type are still in service, two more such corvettes have been put into reserve. Corvettes with a displacement of up to 425 tons carry artillery, torpedo and missile weapons. The main strike weapon of the Gothenburgs is the RBS-15 anti-ship missiles. The corvettes HMS Gävle and HMS Sundsvall are currently undergoing extensive modernization. After its completion, they will be reclassified as type "Gavle" - after the name of one of the ships. 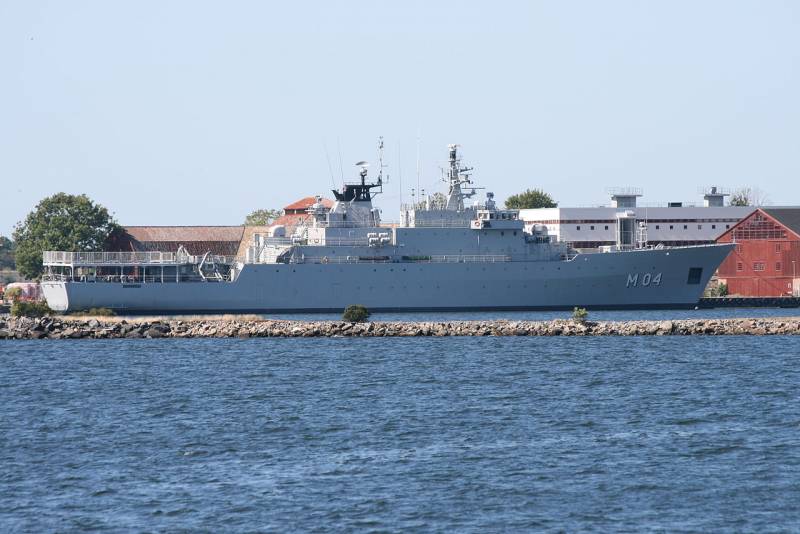 Patrol ship Carlskrona at the pier of the same name naval base
The basis of the surface forces by now has become the Visby corvettes in the amount of five units. The 640-ton stealth ships carry missile and artillery weapons to combat surface, air and submarine targets. The increased attention was paid to the issues of electronic intelligence and electronic warfare.

The patrol fleet includes two outdated Stockholm boats built in the mid-eighties. With a displacement of 380 tons, they carry a 57-mm gun mount and RBS-15 missiles. Since the beginning of the nineties, boats of the Tapper type were built - of the 12 built, 8 are still in service. The 62-ton boat has machine guns and light anti-submarine weapons on board. The largest combat unit of the Navy, HMS Carlskrona, belongs to the patrol ships. This ship is armed with 57- and 40-mm artillery systems and carries an advanced detection system.

An important component of the surface force is the Stridsbåt 90 multipurpose speedboats in the amount of approx. 150 units There is also approx. 100 motor boats of the "G" type. These boats and boats can be used for a wide range of tasks, incl. for the landing of troops. In addition to them, there are approx. 10 specialized landing craft types Trossbat and Griffon. 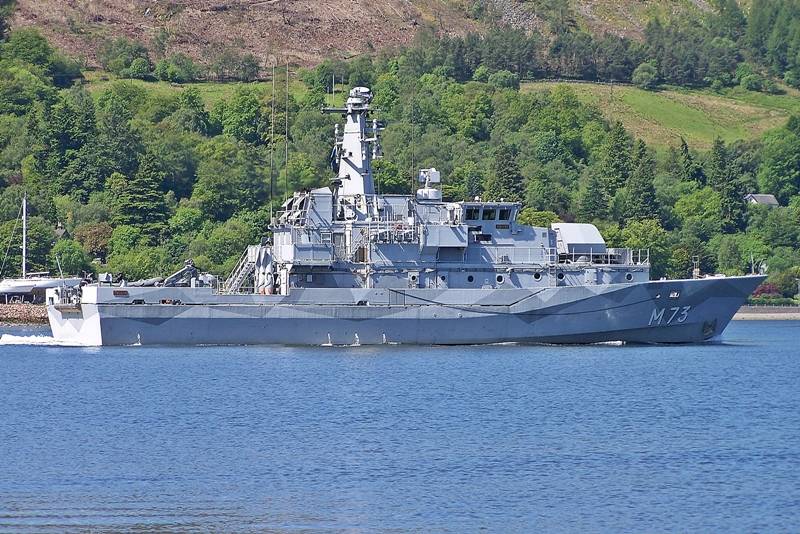 Minesweeper HMS Koster
Five of the seven Koster minesweepers built in the eighties and nineties remain in service. Later in production, they were replaced by the more modern Styrsö ships. Two of these ships continue to serve as minesweepers, two more have been converted into diving vessels.

In the near future, the Swedish Navy will decommission its only reconnaissance vessel, the HMS Orion (A201), equipped with a variety of electronic surveillance and data acquisition equipment. In 2020-21. it is planned to accept a new ship of this class with more advanced equipment into the fleet, after which Orion will be decommissioned or rebuilt for other needs.

The surface forces include a dozen and a half auxiliary vessels - transports, rescuers, tugs, torpedo boats, etc. With their help, the daily service of the combat personnel, exercises and participation in humanitarian operations are provided. 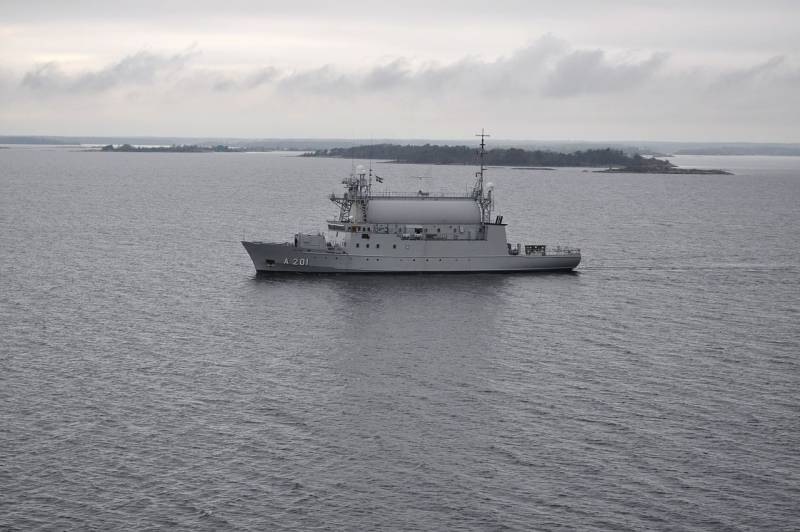 In general, in terms of its quantitative and qualitative indicators, the Swedish Navy corresponds to the views of the country's military and political leadership and is capable of ensuring the security of the sea borders. At the same time, certain measures are needed to further develop the fleet and build up its combat capability, incl. in conjunction with other types of armed forces.

In the context of further development, the main efforts are now aimed at updating the submarine forces and intelligence capabilities. For this, the submarine Blekinge is being built at the Swedish shipyard, and the construction of a promising reconnaissance vessel has been ordered in Poland. The production of boats of various types continues. Plans to build new large surface ships have not yet been announced. The newest and most efficient corvettes in the Navy are still the Visby corvettes.

At the same time, organizational measures are carried out. So, last year, the main headquarters of the Navy was moved to its old place - to the protected naval base Muskyo. This made it possible to reactivate and return to operation a unique military facility, as well as to dramatically increase the security and stability of command structures without significant expenditures. 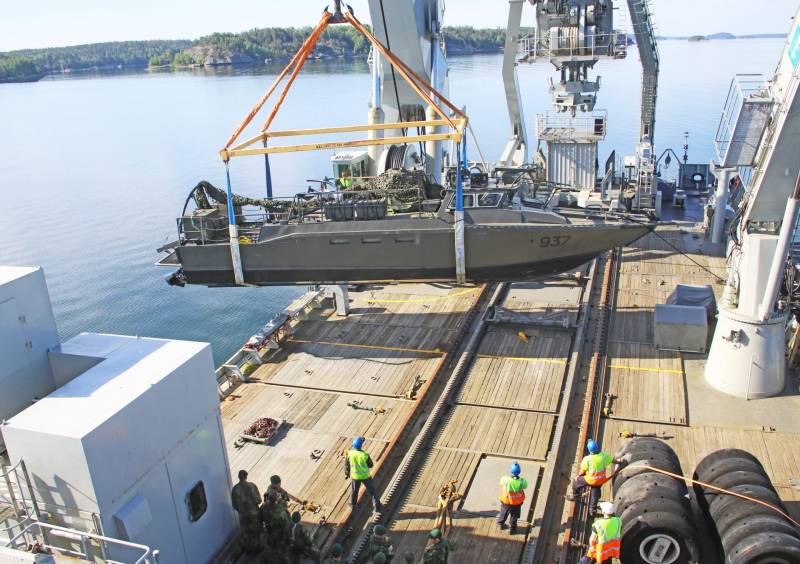 The most massive sample in the Swedish Navy - the Strb 90 boat
A few days ago, it was announced that the military presence on Fr. Gotland. In view of the changing situation in the Baltic region, it was decided to transfer additional units to the island and increase their combat readiness. These activities will involve the ground forces, the air force and the navy. However, detailed data on the participation of the fleet in the defense of Gotland and the surrounding areas have not yet been disclosed.

Against the background of neighbors

In general, the Swedish Navy is one of the largest and most powerful in the region, but cannot claim absolute leadership. There are also larger and more developed fleets, which have advantages of a quantitative and qualitative nature. However, the Swedish navy is consistent with the country's current defense doctrine and capabilities.

Taking into account the changes in the military-political situation in the Baltic and in Europe in general, the Swedish command is forming and adjusting plans for the development of the armed forces and the Navy in particular. Structures and subunits are being relocated, exercises and troops are being deployed. At the same time, a radical restructuring of the naval forces is not planned. Apparently, in the foreseeable future, the general appearance and capabilities of the Swedish Navy will not seriously change.