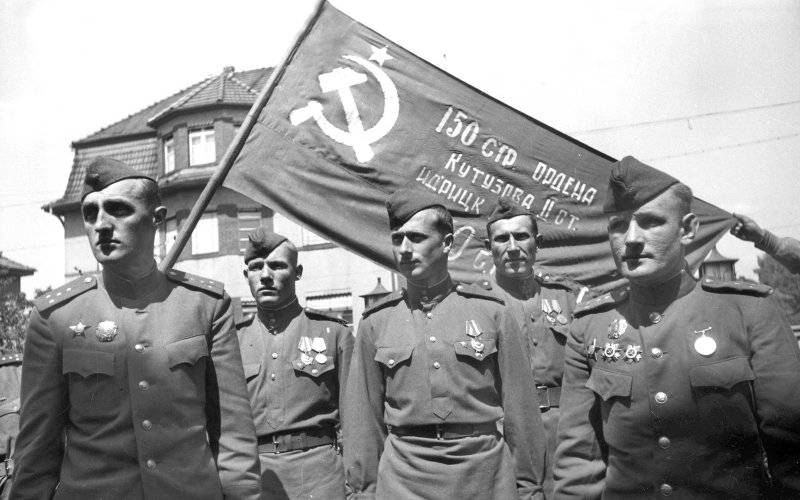 Servicemen of the 150th Idritsa Rifle Division against the background of their assault flag hoisted on May 1, 1945 over the Reichstag building in Berlin and later became a state relic of Russia - the Victory Banner

Soviet Russia fought a lot, no less than tsarist Russia. However, Stalin's wars were just - in the interests of Soviet (Russian) civilization and the people.

The Stalinist USSR fought a lot. In 1936-1939. - the war in Spain, where we supported the Spanish Republic. At the same time, Soviet military specialists and pilots are fighting in China, supporting Marshal Chiang Kai-shek against Japanese troops. In 1938-1939. - battles against the Japanese at Khasan and Khalkhin Gol. In scope and essence of the matter, it was actually the second Russo-Japanese war.

The war in Spain, on the one hand, was useful to us. Moscow, helping the Spanish Republic, diverted the attention and forces of fascist Italy and Nazi Germany. In Spain, many Soviet military specialists, pilots and tankers were tested by fire. On the other hand, Russia-USSR was drawn into this war by Trotsky's followers, fiery internationalist revolutionaries who dreamed of the "fire of the world revolution." This war allowed the West to present Russians as "aggressors dreaming of revolution." This war embroiled Moscow with Berlin, although at that time there were chances to preserve peace between us, to build an axis between Russia and Germany, which was never created before the First World War.

Revolutionary internationalists at this time still retained strong positions in the army and the People's Commissariat of Foreign Affairs of the USSR. The "Great Purge" has not yet been carried out. Stalin's main focus at this time was the construction of a powerful industry. Maxim Litvinov (née Meer-Genokh Moiseevich Wallah), who headed the NKID, was the main supporter of a collective security system that would unite the Soviet Union and Western democracies. He tried his best to make friends with France and the United States, although their "friendship" was not beneficial. He quarreled with Germany, our main commercial and industrial partner in Europe.

As a result, we climbed into Spain. They began to fight with the Spanish nationalists Franco, the Italian fascists and the Germans. However, Moscow did not control the republican government. This led to confusion and vacillation in the ranks of the republic's supporters, to anarchy and revolts of the Trotskyists. In addition, the USSR did not have a common border with Spain and could not provide large-scale assistance. Franco's regime took over. We got another hostile country, and the Spaniards fought on the side of Hitler during the Great Patriotic War. It would be better if the expended forces and resources were used in China to fight the Japanese. We didn’t spoil our relations with Berlin.

Stalin realized that "fiery revolutionaries" were dragging Russia into adventures. Litvinov was dismissed in 1939. Moscow's foreign policy has changed dramatically. We began to fight openly for our interests. The Finnish campaign was certainly correct, in the national interest. Later, Stalin was accused of "aggression" against the small but proud republic. Like, it was the unprovoked aggression of the USSR. The Russians attacked the Finns, but were rebuffed.

However, in reality, the situation was different. After the collapse of the Russian Empire, a Finnish state was created on our northwestern border, which laid claim to Russian lands. The Finnish elite wanted to seize Karelia and the Kola Peninsula, land to Leningrad, Arkhangelsk and Vologda. Finnish nationalists made plans to create a "Great Finland" to the Northern Urals and even further. The Finns themselves attacked Soviet Russia twice: in 1918 and 1921. In Helsinki, they focused on our enemies from the west: Germany, France and England, from the east - Japan. It was planned that when a strong enemy from the west or east comes up against Russia, they will be able to seize Russian lands. At least Karelia and the Kola Peninsula.

After the catastrophe of 1917, Russia lost its strategically important positions in the northwest. The Baltics and Finland became hostile territories. Leningrad-Petrograd, the second capital of Russia, was under the threat of attack not only from the sea, but also from land. Stalin tried to negotiate with the Finns in the world, offered huge advantages, benefits to protect Leningrad. But the Finns, confident in the strength of their army, the strength of the fortifications, and help from the West, proudly refused. In response, we received the full program. The Finnish army was defeated. Stalin could take all of Finland, but he limited himself to lands for the security of Leningrad, Vyborg. Also, Moscow got a real idea of ​​the state of its armed forces, their readiness to fight in difficult conditions. Before the start of the Great War, they managed to correct some of the shortcomings. Also, the fall of the Mannerheim Line made the Baltics and Romania bow. We returned our lands in the Baltic and Bessarabia.

Our participation in the war for China's freedom in the 30s can also be attributed to correct, just wars. The fighting in China delayed the samurai forces from a direct clash with us. Japan is bogged down in China. The best infantry divisions of the Japanese Empire fought there. But they could storm our then rather weak lines in Southern Siberia and Primorye. A big war was being prepared in Europe, Moscow could not fight on two fronts, in the east and west. We were able to distract the Japanese from our lands with a small force in China.

The battles on Khasan and Khalkhin Gol played an important role in Japan's turn to the south. The United States and Britain at this time tried to pit us against the Japanese again. Germany and Japan with blows from the West and the East were supposed to crush Russia. It is clear that we did not need such a war. The Japanese hesitated at this time. Part of the military-political elite demanded to go north, to seize Russian lands to the Urals. Another part of the Japanese elite offered to go to the South Seas, Indochina, Indonesia, Australia and India. Resources there were rich, living conditions were easier.

In 1938, the Japanese conducted reconnaissance by force on Khasan. Marshal Blucher acted unsatisfactorily. The Japanese attack was repulsed, but Hassan left them with the impression that the Russians could be defeated: their generals were as weak as in 1904-1905. The threat of a major war in the Far East loomed. In 1939, the Japanese army began a serious operation in Mongolia, which was our ally. Stalin decided to use this moment to teach the samurai a lesson, to secure our borders in the East. Russian troops under the command of Zhukov defeated the enemy in a fierce battle. The Japanese were stunned. They faced a determined, proactive adversary. With an industrial power capable of exhibiting aviation and armored armada. The defeat of Japan at Khalkhin Gol was so crushing that they decided to turn south, which was a very unpleasant surprise for the Anglo-Saxons. Japan did not dare to attack Russia either in 1941, when the Germans were at the walls of Leningrad and Moscow, or in 1942, when the Wehrmacht stormed Stalingrad.

In the Far East, Stalin saved us from defeat and death in World War II. Thus, the wars with Japan in the 1930s and in 1945. were perfectly true and fair. They were conducted in the interests of the state and the people. In 1945 we took revenge for the defeat in 1904-1905. They avenged Tsushima and Port Arthur. We returned the Kuriles, South Sakhalin and Port Arthur. South Korea and China fell into our sphere of influence. The huge Celestial Empire soon became our "little brother".

Stalin's last war, the 1950-1953 campaign in Korea, also refers to Russia's strategically positive wars. We have inflicted a serious defeat on the United States. They buried the hopes of the Western generals for a successful air-nuclear war with the USSR. Soviet pilots and airplanes gave the Westerners a good lesson: you cannot fight the Russians. Washington saw that the newly created NATO would not be able to win in a land war.

The Great Patriotic War, the main superbattle of World War II, was just for all Russian people. We fought for our lives, for our existence. The West, represented by Hitler, sentenced Russia and the Russians to the complete destruction and slavery of the remnants of the people. We have destroyed the most dangerous and effective ideology of the West - fascism and Nazism. Russia liberated Europe. The Stalinist USSR created the Yalta-Potsdam political system, which gave the planet relative peace for two generations.

At the same time, Stalin did this not just for the quickly passing glory. We have returned many of the positions of the Russian Empire and even more. Poland became part of the socialist camp. The irreconcilable, thousand-year-old enemy of Russia became our ally under Stalin. The Poles returned to the fold of the Slavic world. Our sphere of influence includes the countries of Central and South-Eastern Europe. We have included East Germany in our union - another ancient ram of the West against Russian civilization. As a result, Stalin created a powerful protective barrier from European countries in the western strategic direction. Also, these countries became part of a common market, an economic block.

Author:
Alexander Samsonov
Photos used:
http://waralbum.ru/
Articles from this series:
Russian penal battalion. Why did Russia fight for European stability
How the Anglo-Saxons played off Russia and Japan
Why England dragged Russia into the First World War

Ctrl Enter
Noticed oshЫbku Highlight text and press. Ctrl + Enter
We are
Samurai lessonDiplomats of the People's Commissariat of Defense: on the eve and during the war
Military Reviewin Yandex News
Military Reviewin Google News
120 comments
Information
Dear reader, to leave comments on the publication, you must to register.