How the Anglo-Saxons played off Russia and Japan 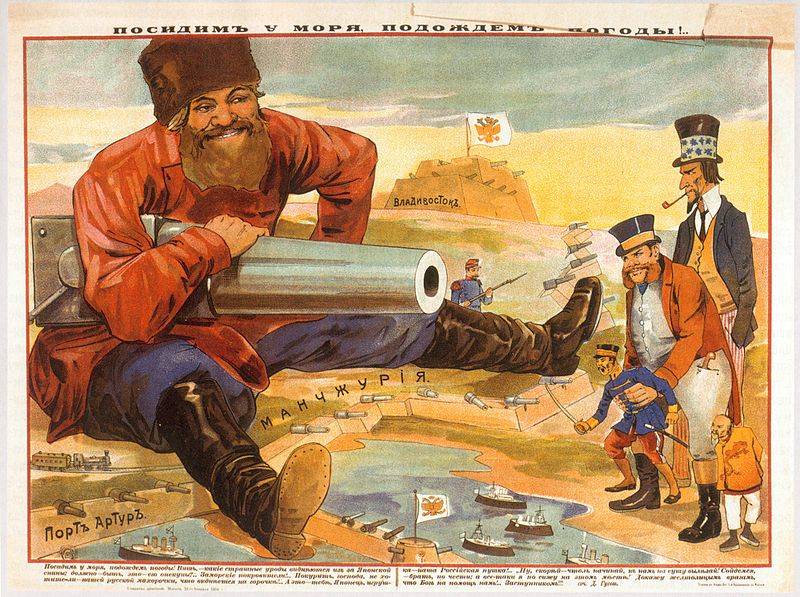 Russian poster of the beginning of the war "Let's sit by the sea, wait for the weather"

The use of the "Russian penal battalion" reached its apotheosis at the beginning of the XNUMXth century. Then participation in other people's games led the Russian Empire to a terrible collapse. It all started with a "small victorious war" with Japan.

The last tsars from the Romanov dynasty were not up to par. The only exception was Alexander III the Peacemaker. During his reign, Russia did not allow itself to be drawn into any war. At the same time, we expanded our possessions in the south, in Turkestan it was in our national interests. And they began the construction of the Great Siberian Route, which sharply strengthened our military-strategic and economic positions in Siberia and the Far East (Alexander III Alexandrovich - the great Russian ruler who suppressed the destruction of Russia).

True, Russia was involved in the Russian-French alliance, but it was not yet fatal. We had good relations with Germany in general. Therefore, Russia could still avoid the trap of "friendship" with England and bet on building the Paris-Berlin-Petersburg axis, which would fend off the aggressive aspirations of the Britons. In the Far East, it was possible to attract Japan to the union, covering Russia from the east.

The unexpectedly quick death of Tsar Alexander III led to the fact that the Russian throne was taken by a poorly prepared person - Nicholas II. He was under the illusion that he still had many years of carefree freedom. But I had to accept the "heavy hat of Monomakh." This was the end of the Romanov empire. Russian soldiers again performed unparalleled feats, correcting the mistakes of top managers, paved the Anglo-Saxon empire with their bones. Russia's participation in someone else's game has reached its maximum. Russia was set up twice, played off first with the Japanese and then with the Germans. Both wars were unnecessary, extremely dangerous for the empire. The result was a civilizational, geopolitical and state catastrophe of 1917. The death of the king and his family, millions of deaths.

Japanese "ram" and the royal mistake

It should be noted that thanks to St. Petersburg's passion for European affairs, we have completely failed the Far Eastern policy. So, with close attention to the policy of the Russian Empire in the Far East and the Pacific, you can see that we missed several excellent chances to establish our sphere of influence in the northern part of the Pacific region. Petersburg was unable to master the lands in the Far East in time, making the region its powerful military and economic center. He missed the opportunity to occupy Hawaii, California, take Korea under his protectorate (even before the modernization and rise of the Japanese Empire), and make friends with Japan. The apogee of our failures was the sale of Russian America under Alexander II.

The West, represented by England and the United States, stubbornly turned the planet into its hunting grounds. Westerners do not forgive mistakes. The West turned China into a semi-colony, hooked a huge people on drugs (opium). The most ancient civilization was decaying, living in a narcotic intoxication. Japan was "discovered" at gunpoint (like Korea). The Japanese elite, seeing the terrible threat of colonization, mobilized the nation and made a rapid leap towards Western modernization. The emphasis was placed on the military, transport and industry. A new predator has appeared on the plan - Japan. In foreign policy, militarized Japan repeated the policy of the West: external expansion, seizure of resources and sales markets. Britain and the United States created a "Japanese battering ram" to incite the Japanese against China and Russia and use new wars to gain gesheft.

Petersburg slept through the appearance of a new predator in the Far East, dwelling in the illusion of its naval power and the weakness of the Japanese. At the same time, Russia had every chance to avoid a war with Japan. At the beginning of the XNUMXth century, the tsarist government again received unique opportunities in the region: excellent strongholds on the Liaodong Peninsula, access to the warm seas. The creation of the Yellow Russia began. The opportunity opened up for our economic expansion in the Asia-Pacific region. With Japan, it was only necessary to resolve the Korean question.

It is understandable that the West was furious over the Russian breakthrough in the East. The British were especially indignant. India was the backbone of their empire and wealth. It was also a springboard for control over other countries of South and Southeast Asia. The British were very much afraid that the Russians would start paying them in the same coin. Revolt in India, send officers weapon and gold. That would deal a terrible blow to the British world empire. The British looked very closely at the penetration of the Russians into the Pamir, Tibet. They did not like the fact that the Russians were rapidly advancing in the east and occupied the Amur region. Already during the years of the Eastern (Crimean) War, the British, with the support of the French, tried to knock us out of the Far East. But their landing at Petropavlovsk-Kamchatsky was repulsed.

Then the Britons decided to pit us against the Japanese. Japan woke up from an age-old sleep, rapidly modernized, built railways, a fleet and created a modern army. She needed resources. This means that the Japanese must be pitted against the Russians. Several major tasks are being solved in one fell swoop: 1) Russia is stopped in the east and again turned to the west, where a new trap is being prepared (war with Germany); 2) Japan is being pitted against China and Russia, creating a hotbed of tension on the planet for a long time (it still exists!); 3) distract the Japanese from a dangerous southern direction for the Anglo-Saxons: towards the southern part of China, Hong Kong, Singapore, Indonesia and Australia; 3) receive all kinds of economic advantages, the sale of weapons, ships, ammunition, goods, financial stranglehold (loans). As a result, they finish off weakened geopolitical opponents and get everything.

The British have found an ally in this game - the United States. A new imperialist predator who immediately set the maximum task: dominance on the planet. The strengthening of the Russians in the Pacific and in China worried the Americans too. They have already absorbed foreign possessions, including Russian America, in North America (except Canada), and established their sphere of influence in Latin America. Having captured during the war with Spain (1898) its last possessions in Latin America (Cuba, Puerto Rico), Guam and the Philippine Islands, the United States also began to claim hegemony in the Pacific Ocean. Washington wanted to set the Japanese against China and Russia in order to protect itself in the south. Let the Japanese fight for Sakhalin, Primorye and Kamchatka. The Russians had to be pushed back from the ocean and locked in the depths of the continent. Otherwise, Russia could become a strong rival in the region.

That is, the interests of Britain and the United States coincided at this stage. True, then the Americans planned to oust the British too, occupy their sphere of influence, and subjugate China. France, in turn, feared that the Russians would get too carried away by affairs in the Far East, forget about the alliance with them, and they would be left alone against Germany. Therefore, France needed that Russia left the East, returned to Europe. Germany was late for the division of the colonies and also wanted to gain a foothold in China. On some issues, her interests coincided with the Russians. Germany and Russia could have formed an alliance in the Far East, but this chance was not used.

The conspiracy machine started spinning. To play off the Russians and the Japanese, they used everything. They allowed Japan to defeat China in an exemplary manner, but they immediately gave it up, took away most of the booty. At the same time, the Russians were set up, it seemed to the Japanese that Russia was to blame for everything. Anti-Russian hysteria began in Japan. Used the Korean question, which is sensitive to Tokyo. Indecision and short-sightedness of Tsar Nicholas II, greedy for profits Russian businessmen who did not want to give in in Korea. The "agent of influence" Witte did a good job, drawing Russia into a trap. At the same time, all methods disrupted the development of our naval forces in the Far East. Simultaneously, Britain and the United States are vigorously pushing Tokyo to attack the Russians. The British in 1902 conclude a defensive alliance with Tokyo. The Anglo-Saxons help the Japanese build a modern fleet (some of the ships were sold). London and Washington give Tokyo money for militarization and war.

And the war began. The Russian military-political leadership slept through it. Although her script was clearly visible even before the start of the war. In particular, it was described by Admiral Makarov. The Japanese did not come up with anything especially. They repeated the plan for a war with China. Sudden blow, Russian withdrawal fleet from the game, seizing control over sea communications, landing amphibious armies, seizing Korea and Port Arthur before the arrival of the main Russian forces.

Japan knocked Russia out of Port Arthur, the plan for the creation of the Yellow Russia was buried (as well as the billions of rubles spent on it). Korea came under Japanese rule. Russia lost South Sakhalin. The Russians were locked up in Vladivostok, the Japanese blocked the exit from Primorye with the help of positions in the Kuriles, Sakhalin, Korea and South Manchuria. Our naval forces in the Far East were mostly destroyed. True, the Japanese were discouraged. The country was exhausted by the war, suffered heavy material and human losses, and ran into debt. And the booty was not as big as we wanted. Britain and the United States received the main benefits. They did a great job. Two skins were ripped off Japan: for weapons and loans with interest. Russia was driven out of the East, and under the guise of war, the British captured Tibet. A revolution was unleashed in the Russian Empire. The tsar could not be overthrown, but the rehearsal was glorious. The state was destabilized, all the centuries-old contradictions came out. The basis for future turmoil has been created.

The war and the first revolution caused a severe economic crisis, forcing the Russian government to fall into heavy debt to the West. Petersburg had to take from Western banks a huge loan of 2,5 billion francs for that time. With this loan, Russia was tied to France and Britain. He had to pay in blood on the fields of the First World War. Potential and extremely dangerous for the Anglo-Saxons, the alliance of Russians and Germans was thwarted. The Russian fleet, the world's third-strongest armored fleet, died in the Far East. English naval power grew even stronger.

Thus, the war with Japan unnecessary for Russia and the people gave rise to a chain of new negative consequences that dragged the Russian state into a new trap of 1914, which became fatal. There are excellent books on this topic by S. Kremlev: "Russia and Japan: play off!", "Russia and Germany: play off!"