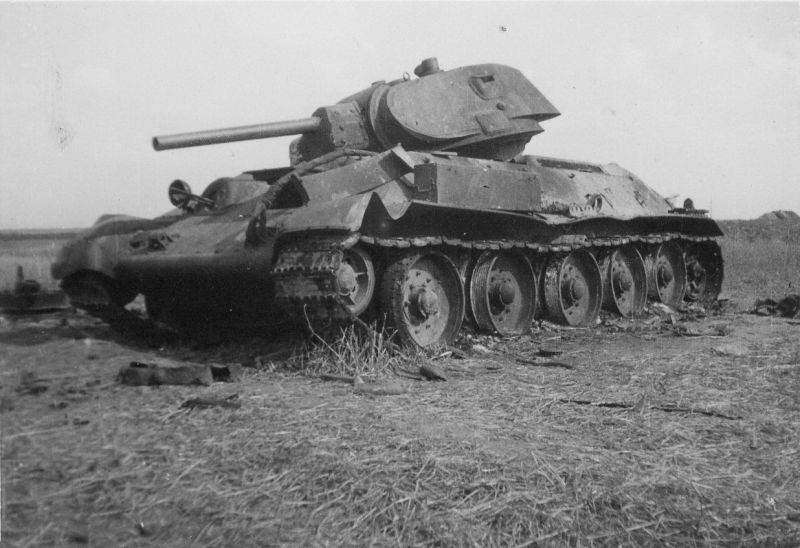 Will always beats the machine

History combat damage tanks The T-34 should start with the German anti-tank memo, which the intelligence department of the Red Army General Staff published in translated form on September 15, 1941. It was according to this training manual that the Wehrmacht organized resistance to Soviet armored vehicles. As follows from this document, the Germans considered tanks to be the most dangerous objects on the battlefield: it was ordered not even to pay attention to air raids and to concentrate all fire on armored vehicles. An interesting remark in this connection in the manual:

"All kinds weapons fire on tanks. Even if there is no penetration of armor, the impact of shells and bullets on the armor has a moral effect on the tank crew. 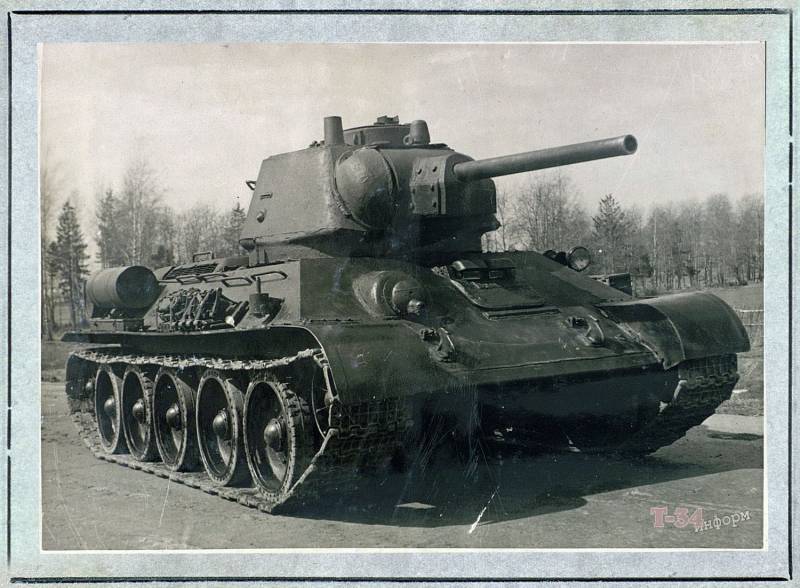 Source: t34inform.ru
What did the Germans intend to use on Soviet tanks? The scribe even advised to have at least 10 armor-piercing cartridges at all times for a rifle, and 100 pieces for a machine gun. The Nazis, with small arms, sought to force the tankers to close the hatches in order to limit the view on the battlefield. In the most successful version, the bullets hit the machine's observation devices. At the same time, the manual indicated that machine guns with conventional bullets should fire at tanks from a distance of no more than 150 meters, and with heavy pointed bullets from 1500 meters. The most common anti-tank weapons in the Wehrmacht at the beginning of the war were: 28-mm heavy anti-tank rifle Panzerbüchse 41, 37-mm light Pak 35/36 cannon, 50-mm medium Pak 38 cannon, 105-mm light field howitzer mod. 18 and 105-mm heavy field cannon model 18. The manual does not clearly divide Soviet tanks by type and method of fighting, but some advice is still given. It is recommended to aim at the undercarriage of tanks and the junction of the turret with the hull, as well as at the sides and stern. On the frontal projection, the artillerymen are generally not advised to fire, that is, in September 1941, the Germans had few guaranteed means of hitting a Soviet tank head-on. It is noteworthy that the Germans suggested using a heavy 150-mm sFH 18 field howitzer to suppress tanks, mentioning that the weapon would be especially effective against the chassis. 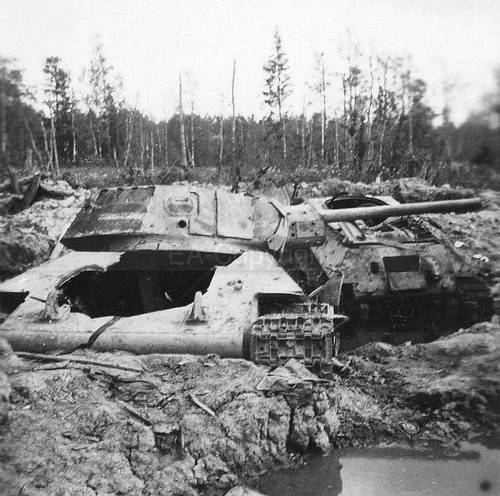 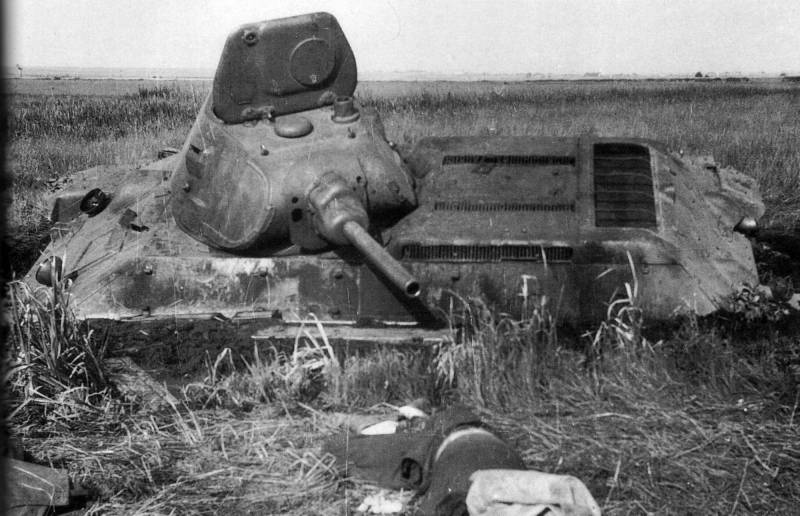 Source: steamcommunity.com
In the event of a breakthrough of tanks at close distances, each soldier of the Third Reich had to enter into a "hand-to-hand" duel with him. Quote from the manual:

“In the case of close combat, you need to blind the crew by throwing smoke grenades. Bring the tank up to a distance of 9 meters, throw a grenade, a bunch of grenades or a bottle of gasoline and then hide in the nearest cover. If the tank has stopped, then you need to climb onto it and blind the viewing slots. Hit the tankers jumping out of the tank. "
The soldier must have had the guts to fight the tanks of the Red Army. At the end of the memo is a motivational tirade:

“The brave soldier is able to destroy any tank enemy [translation feature] with his weapons and in interaction with other types of weapons. He must aim deliberately and have a strong will to pierce armor. Once inspired, a firm and constantly growing desire to defeat tanks is a guarantee that the units will not have any fear of tanks. Honor will always resist tanks. Will always beats the machine. "

The Wehrmacht was a dangerous enemy and, guided by the above techniques, often effectively acted against Soviet tanks. At least at the beginning of the war. Unfortunately, technical problems also contributed greatly to the loss of tanks. One of the first detailed analysis of the failure of T-34 tanks was reflected in the top secret report of TsNII-48 September-October 1942. The so-called Moscow group of the institute analyzed 178 tanks, most of which were knocked out. The vehicles were examined at the Moscow repair shops # 1, # 6 and # 112. It is not completely clear whether this is the first analytical report at the beginning of the war, but it is obvious that the retreating Red Army at the beginning of hostilities left all the destroyed equipment on the battlefield. A more or less representative sample of failed T-34s appeared only by the middle of the second year of the war. 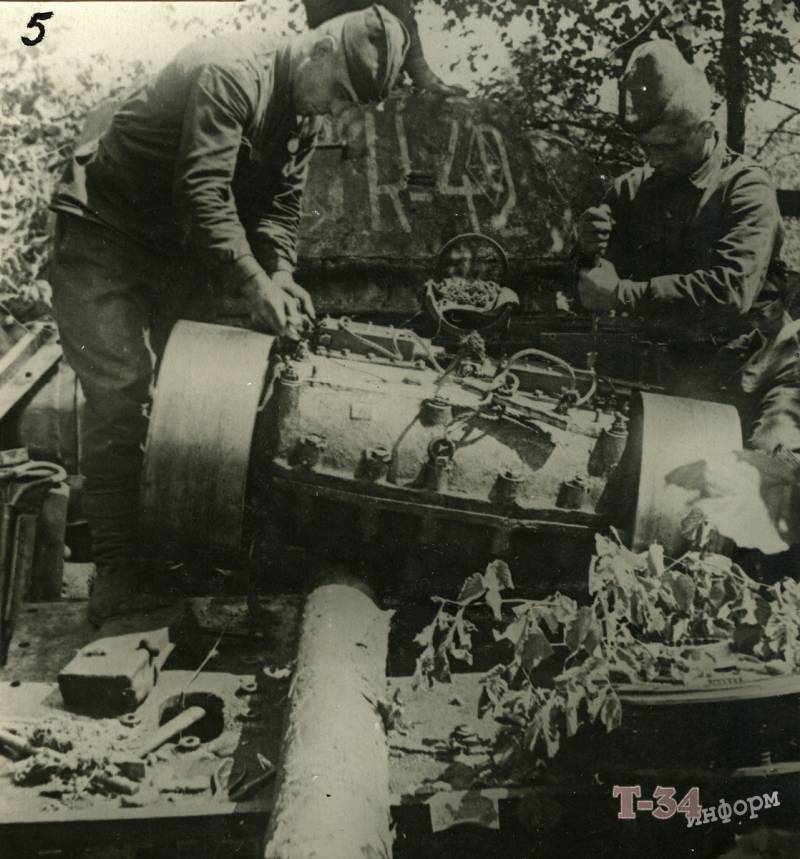 Source: t34inform.ru
How many tanks were out of order through no fault of the Wehrmacht? The counting situation was not easy. At bases No. 1 and No. 6, the researchers checked all 69 T-34 vehicles without exception, of which 24, or 35%, broke down without affecting the armor protection. The reason was the failure of the diesel engine, chassis or transmission. The rest of the tanks (45 vehicles or 65%) were hit by enemy artillery. But then circumstances forced the engineers of TsNII-48 to change the conditions of the study. The fact is that the 109 remaining tanks were specially selected by the specialists of the GABTU of the Red Army on the basis of the destruction of armor by shells, that is, vehicles that had lost their speed for technical reasons did not get there. These tanks were located at the factory repair base # 112. Why the specialists of the Armored Institute were not allowed to select tanks is unknown. All this speaks of the conventionality of the conclusions about the proportion of the T-34 out of order for technical reasons. On the one hand, out of 69 vehicles, 24 were out of service due to malfunctions (though 2 of them were burned down by Molotov cocktails). This, of course, is a lot, but any researcher will point to a very small sample, which does not allow making unambiguous conclusions. Therefore, it is worth talking about this with a great deal of convention.

The most difficult and demanding unit in a tank for quality maintenance is the engine. And he, of course, in combat conditions was the first to fail. It is worth mentioning that the tanks were repaired in the rear between 20 August and 10 September 1942. 11 cars at repair bases # 1 and # 6 were with non-working V-2 diesels and 7 more had a faulty chassis. Researchers write about this:

"It was not possible to establish whether the failure of the tank was the result of a breakdown of the engine or the result of working off the set motor hours during the collection of materials."
It must be said about the shortcomings of the tank diesel engine: at the beginning of the war, the V-2 was a rather crude design with a limited service life. The evacuated plants were just starting to set up the production of complex diesel engines, it was impossible to demand high quality from them. Among the remaining faulty tanks, four were with a destroyed chassis, and the two armored vehicles mentioned above burned down, most likely due to Molotov cocktails. 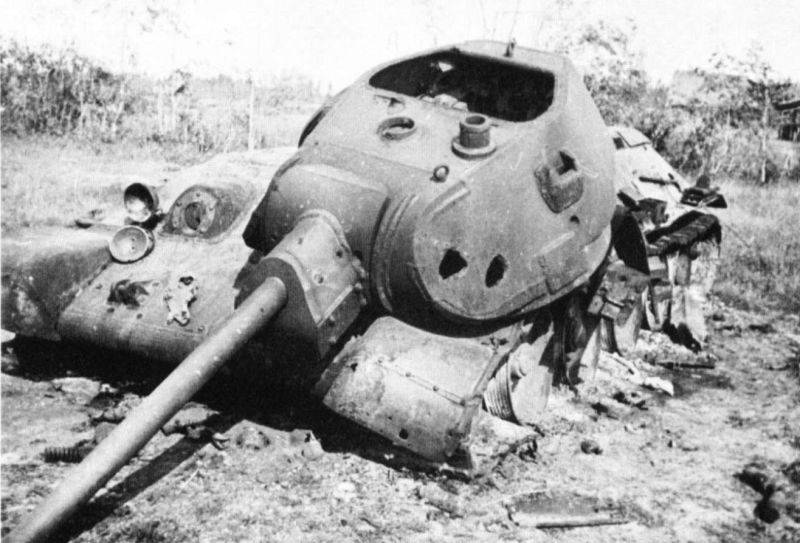 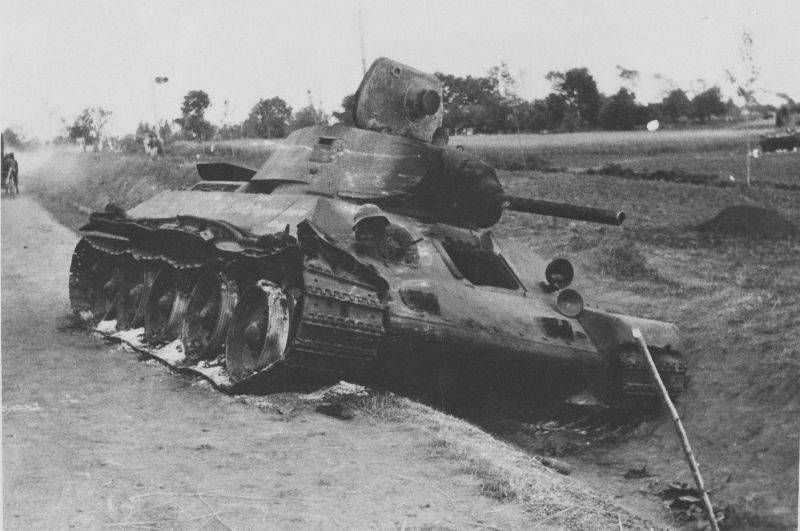 Source: waralbum.ru
The T-34s that were out of order for technical reasons were sorted out, now it was the turn of combat defeats. 154 tanks were presented for study. Most of them were hit in the corps - 81%. The calibers of the projectiles were determined by the engineers approximately, based on the diameters of the holes and dents. It turned out that Soviet T-34s were fired upon from everything that the Germans had at hand. Range of calibers: 20 mm, 37 mm, 42 mm, 50 mm, 75 mm, 88 mm and 105 mm. The percentage of damage by one or another projectile varies greatly and depends primarily on the availability of weapons in the Wehrmacht artillery. Most often, researchers from TsNII-48 met marks from 50-mm guns, of which the German anti-tank crews had the most. In second place were the 75mm and 37mm guns, with the 20mm and 88mm markings being the rarest. Obviously, it was useless to fire at the T-20 from 34-mm cannons, although the training manual described above called for this, and there were simply not so many anti-aircraft Acht-acht in the tank-dangerous directions of the front. The 88-mm were expected to be the deadliest for the T-34: 95% of hits led, if not to the destruction of the vehicle with a crew, then to severe damage. For 75-mm shells, this figure was 69%, for 50-mm shells - 43%. It should be noted that this percentage included hits with a violation of the rear strength, when the projectile penetrated the armor (in whole or in part) and caused the destruction of mechanisms and the destruction of the crew. For the entire sample of hits in the T-34, such defeats were slightly less than half - 45%.

An interesting story is the identification of traces from sub-caliber shells on the armor of Soviet tanks. It was obvious to the TsNII-48 engineers that such ammunition leaves damage no more than 37 mm in diameter, but it is difficult to distinguish them from conventional armor-piercing 20-mm and 37-mm projectiles. Since the proportion of such lesions was small (14,7%), the researchers concluded:

"The spread of subcaliber shells in the German army during the period from May to July can be considered very insignificant."
There is in the report TsNII-48 and reasoning about the nature of the defeat of the T-34. Based on the fact that 50,5% of all defeats fell on the sides, it was concluded that the tactical training of the Red Army tankers was weak. Let us recall the instructions for the Wehrmacht at the beginning of the article, where it was quite unambiguously said about the futility of shooting Soviet tanks in the forehead. An alternative explanation was the assumption of a possible poor view from the tank, embedded in the design itself, because of which the crew simply does not see threats on the sides. As you know, the T-34 received the commander's cupola only in 1943 and, quite possibly, on the basis of this report.

Ctrl Enter
Noticed oshЫbku Highlight text and press. Ctrl + Enter
We are
Is the "old" well forgotten to become the "new"? Part-2. At the call of honor and dutyIron fist of the Red Army. Motorized and tank divisions
68 comments
Information
Dear reader, to leave comments on the publication, you must to register.